While Wyatt was kicking ass last week and posting article after article after article (and even a freaking podcast!), I was off in Lake Tahoe. I went snowboarding, saw California for the first time, and, well, sat around the hotel playing a lot of videogames. I rediscovered something I used to love, and that's 100%ing games. Between school, work and an ever increasing Steam library, actually completing games has become a difficult task to keep up with. After spending some quality time with Hotline Miami last week, I figured it'd be fun to do a segment on the process of taking a game from start to finish. I've never done this before, so let's see how this turns out:

I'm pretty sure I picked up Hotline in a Humble Bundle ages ago, as I remember starting it on Steam one day, going "I'll never finish this", then giving up on it after stage ten or so. Then I got a Vita for Christmas, and with the game being only a buck or so on PSN I decided to bite and try it again. After all, I did hear that this game played like it was built for the Vita, and I'd have to agree. The small analog sticks allowed for quicker aiming, locking on to enemies is as easy as touching them on the screen, and the top down perspective just works on a portable. I was also joyed to learn that unlike the PSP, the Vita supported trophies, and with that, my terrible completionist addiction.

What is Hotline Miami, you ask? Well, it can be summed up as a neon 80's top-down murderfest, but even then I don't think that's doing the game justice. The player is put through a series of levels in which the goal is to kill everyone on a given floor. Some enemies have guns, some have bats. Some can only be killed by gunfire, but gunfire attracts everyone to your location. What looks like a fast paced action game on the surface suddenly becomes a puzzle game of sorts, especially when it comes to hunting down the A+ rank in each level (but we'll get to that later). Deaths are instant, but rarely frustrating when respawning is just as quick. 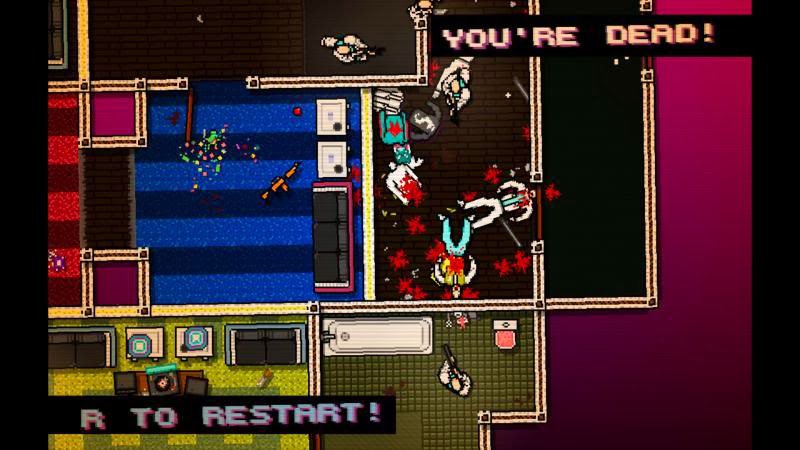 I'm gonna break this playthrough down using trophies/achievements as milestones. First off, the easy ones: beating the game.

My first runthrough was pretty weak performance-wise, even after having played the Steam version. I crept around corners and slowly snuck my way through each floor, often dragging each level on for minutes when it could be completed in seconds.This was okay though, because even when you suck at this game, it's a lot of fun. Nothing beats the feeling of busting into a room, knocking one guy over with the door, throwing your gun at the next, and quickly punching the third guy out and proceeding to take all three of them out with a bat before they regain consciousness. Every death, every retry is a rush that keeps you going until you make that last kill, the soundtrack cuts out, and all that's left is a faint buzzing as you walk calmly over all the carnage you just caused and back to the car. 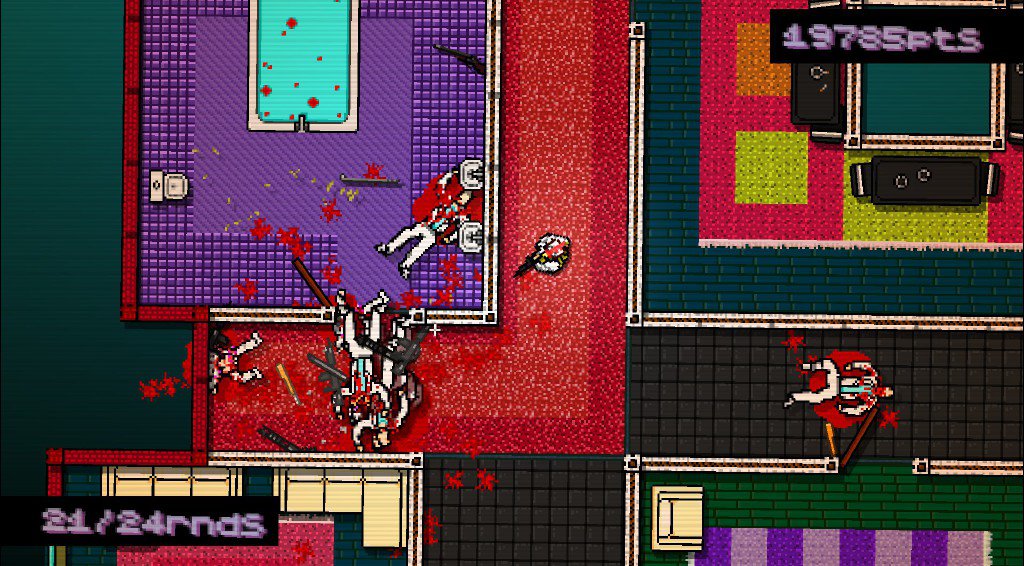 The typical aftermath of a job well done.

But, I digress. For the sake of not spoiling the story, I'll skip it and get to the real inspiration for this post: the achievement mop-up. I honestly thought I was done with this game when I first beat it. But then, I decided to dig around the wiki and learn about some of the secret achievements. After snagging a few of the easy ones - like using a crowbar in a specific part of one level to find a hidden mask - I learned that there was a whole chunk of this story that I had yet to experience. That's when I thought "Eh, I've managed a few A+'s, maybe I could go for all of them." Cue a week of intense concentration, way too much time watching other people play the game, and even the occasional arm falling asleep from playing late into the night.

Admittedly, most of the trophies/achievements were pretty easy and fun to mop up. Finding all the masks and weapons was honestly just an affair of looking up the locations and nabbing them, and killing three enemies with a brick was mostly a matter of finding the right place to do it. Then came my first surprise: complete a relatively easy level with the Nigel the bat mask. Simple, right? Most of the masks I've unlocked before did fun things like make your punches or doors lethal, or make you harder to spot by enemies. Nigel, on the other hand, FLIPS YOUR CONTROLS. Left is right, up is down, et cetera. Cue hurdle one in my achievement hunt. I was running towards enemies instead of away, accidentally swinging my bat at the wall instead of at heads, and all sorts of stupid junk. After way more tries than I expected, I definitely appreciated the curveball from the devs, and continued on with the achievement hunt.

I actually thought I was pretty much done aside from A+ing every stage. Then I remembered, I had two hidden trophies left and a greyed out "Puzzle" option on my pause screen. Admittedly, I looked up what the puzzle was, but I stopped at "there's one in almost every level" and "use the owl mask". After all, I didn't want to spoil too much of the fun of finding the rest out. So I played every level over again, each time searching for a single pink pixel on every floor. But this time, I was better. I wasn't trying to just beat every level, I was rushing through them. At first it was just an attempt to get the puzzle pieces as fast as possible, but then each level started taking me upwards of 20 minutes each. I wasn't blowing through them, I was dying more. But I was scoring higher.

And, well, I got distracted. 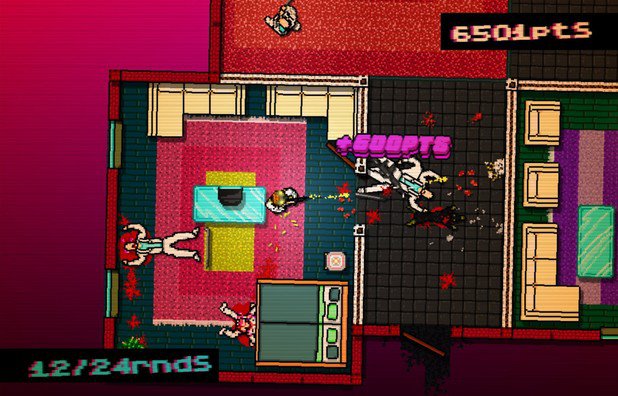 Now it wasn't about getting through the levels quickly, but getting the fastest runs. Which in turn meant I died a lot trying risky things. Run into a room full of armed men with just my fists, punch them all out, grab a bat, execute them all, hit the dog before it kills me, lure one guy out, throw my bat at him, run into another room, etc etc. It was less of an action game now, and more like Tetris. I had twenty options when entering a floor, and any of them could happen depending on if I slipped up or not. After the first night of puzzle hunting turned high score playthrough, I went to bed seeing imaginary level layouts. Just like how one might see Tetris blocks in their head after playing too long, I was thinking of entire speedruns of levels that didn't exist.

Before we get too sidetracked, yes I found all the puzzle pieces. I arranged them in order once I got all of them, took the newly found password to a certain level in the game, and watched the true ending. The intricacy behind it was pretty entertaining to me - hunt down scrabble letters, make a sentence out of it, use the sentence to unlock the ending. Pretty freaking awesome. However, I was so sidetracked by the last five levels I had to A+ that it was no longer my main drive. After all, there was only one trophy left.

Damn if that trophy didn't take the rest of the week, either.

Up to this point, I had only used guides to find a few masks, because for the most part I find collectibles tedious. But now, I had reached a point of desperation. I had tried every path in every floor I could conceive, yet I was only making B's on certain stages. At first, I tried following the advice of most wikis and just using an exploit with the drill mask. Punch everyone out and execute them with the drill, and the extended kill animation will net you more points. I probably could have tried doing every level this way painstakingly, but it wasn't fun. So I decided that for every level, I'd watch someone's path on Youtube, write down their scores at the end of each floor, and then try to beat every single one of those scores. And damn if that wasn't exciting. For each one of those floors, I was in the zone. I would run my hardest and try to clear levels at ridiculous speeds. I had it so fine tuned that each level was down to muscle memory. Run forward, knock a guy over with the door, steal his weapon, throw it across the room, run and punch another guy, lure a fourth one out, execute one of them, knock the guy coming through the door out, execute another before the combo timer runs out... Rinse the blood off, repeat. Those last five levels probably took me three hours to perfect at the least, but I had them down. That Platinum Trophy finally popped, and with it came the same relief completing those early levels gave me. Nonstop intensity, hair trigger reaction times, getting everything just right and sometimes making it up just to keep the combo going...and nothing. I sat back, had the rest of my coffee, and stowed my Vita away for at least a day. I felt like I had earned something and actually needed a break from the leisurely activity that was playing games.

I went outside after that. It was nice, I guess.

So, that's my first 100% Quest completed. Ever spend hours and hours finishing a game only to be left with a list of achievements and a sense of self accomplishment? Tell me about it in the comments. If I end up having any more achievement hunting war stories, I'll probably tell you guys about it here. Let me know what you think!