An Interview About Tiny Towns And Game Design 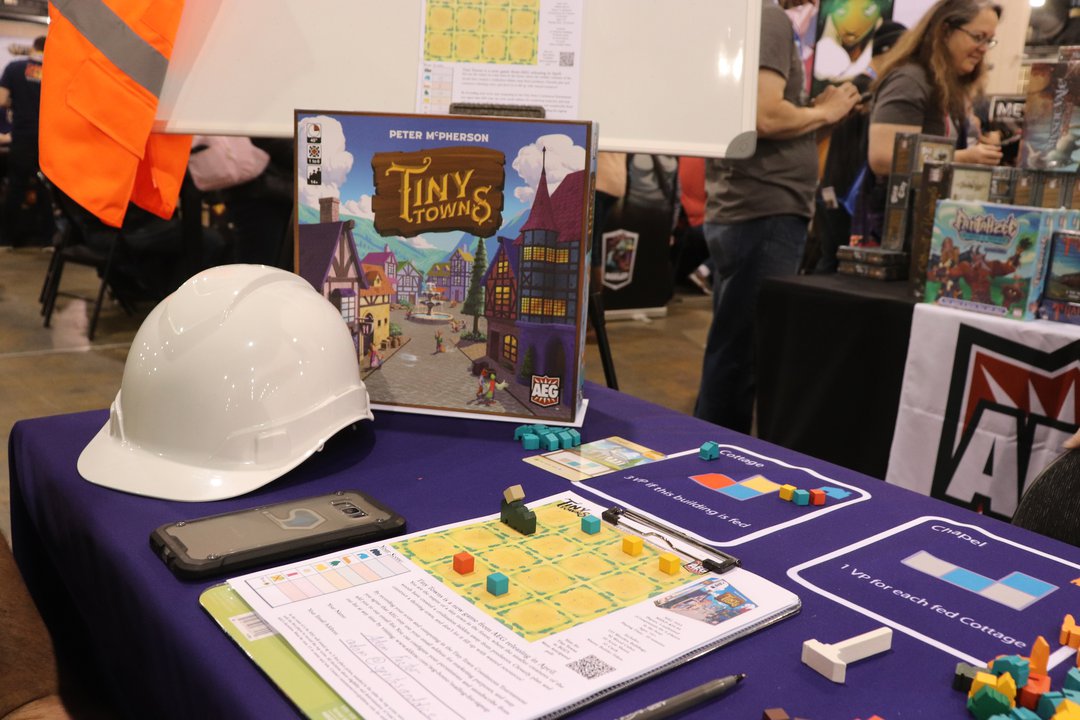 There were a lot of amazing games to see at PAX Unplugged, but it was an unlikely newcomer that has become a favorite as 2019 rolls on. Due out this April by AEG, Tiny Towns is set to become an absolute sensation in the board game industry thanks to a great mix of good marketing, gameplay, game design, and a fun personal story.

Just before PAX Unplugged 2018, game designer Peter McPherson posted on twitter with something that grabbed our attention pretty quickly; Tiny Towns was his first game, and he was being promoted rather heavily at the convention. We had a chance to talk with him and play his game, and both were really great experiences. After just a few rounds, we really believe that Tiny Towns is going to fill a niche in many people's gaming collections, as well as being accessible enough to bring new board gamers in. At the same time, his personal story was too interesting to let pass by.

The Basics Of Building Tiny Towns

Before we get to the interview, its important to understand why this game made such a good first impression. 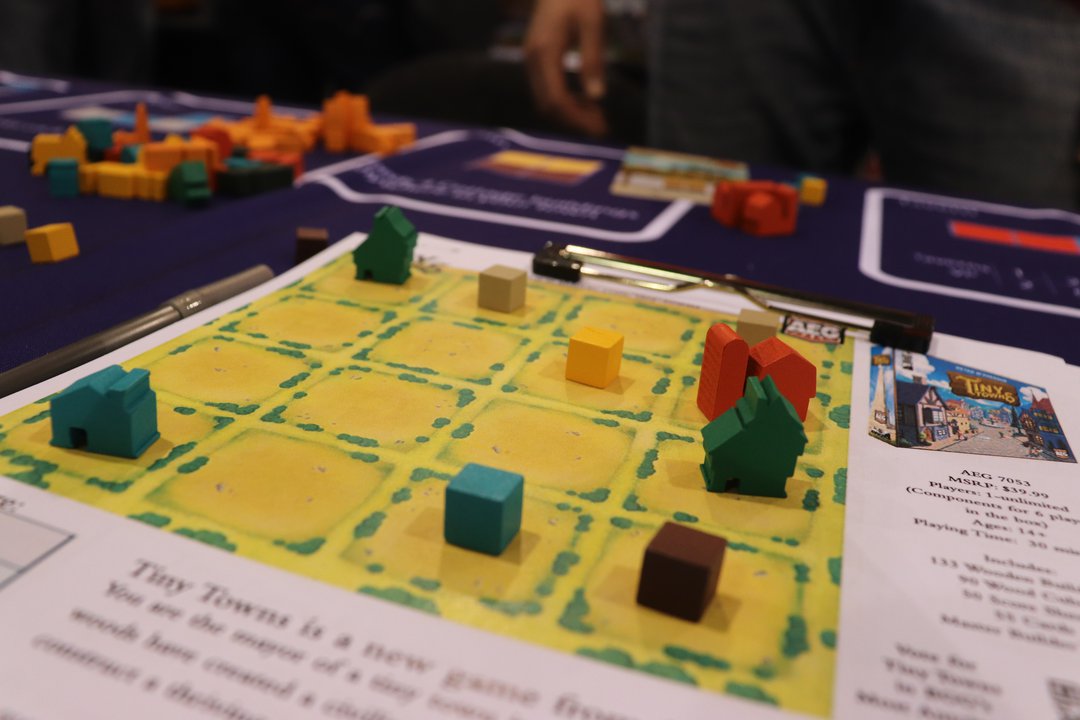 It looks so simple, but its amazing what brightly colored wooden bits will do!

Tiny Towns is a game that comes across as simple - maybe too simple at first glance - but you can quickly see the possibilities of its gameplay after just the first few moves. Every player gets just a four by four grid as their player board, along with a row of buildings that everyone can look at to build. There's a little more to it, but the basics of the game is that on your turn, you choose one of five colors of wooden blocks, and announce it to all players. At that point, every player has to slot in that block to their grid. Once one you have a connected design that matches one of the buildings laid down, you get to gather up all your little blocks, and place an actual building on the grid where some of the building material used to be.

This is a game that transforms from a fun, collaborative 'let's build cute cottages together!' exercise into a mob of your friends begging that you choose the right building material. You see, if your grid fills up at any point and you can't build anything with that is in your grid, you have to stop. During the course of a game, you will find your hopes to create a perfect line of inns and almhouses dashed as another player has decided they really need more bricks to make a factory, and all of your planning is destroyed. You have to figure out how to compromise your perfect 4x4 grid to just keep making as many buildings as possible that will make the people of your little city cheer your architectural genius.

The game ends when everyone is out of space, and that's when the points are tallied. It can take less than thirty minutes, but it crams that 30 minutes with a ton of hard choices. It feels easy to set up and quick to tear down. While I know this game is coming out in April 2019 and we haven't had a chance to see all of the various buildings and monuments, I can't help but think this was one of my favorite games at Unplugged.

A Few Questions For The Designer, Peter McPherson

After PAX Unplugged ended, we had a chance to reach out to ask some follow up questions. We were convinced Tiny Towns is a solid game design, but where did it come from? How did Peter make a game design and have it become a reality?

1 – What was your chief inspiration for making this game? Was it a particular game or genre?

One of the main inspirations was a pencil-and-paper game I play with my dad, often on napkins at restaurants. Each player has a 5x5 grid. Players take turns naming letters, which all players have to write in their grids to write words. This means that everyone deals with the same "odds," while having vastly different boards. Tiny Towns works similarly, with players taking turns naming resources that all players must place on their 4x4 boards to construct buildings. There's also inspiration from games like Catan where you really get the sense that you are working hard to build things. I also think it has some of the spatial puzzley-ness and punishing elements of Patchwork.

2 – What inspired you to make a game about town design AND Tetris at the same time? It feels both really simple as an idea, but also really innovative on how buildings are created.

Well, I love games where you get to build something that is yours--the end of the game leaves you with something to admire, whether you did well or poorly. Town building was one of the first themes I tried out, and it has always felt right. As for the Tetris aspect, I really enjoy spatial puzzles. I think they lend to unusual decisions where different shapes and arrangements are useful or awkward at different times. While I think the "glomming" mechanic of building in Tiny Towns (where resources shrink down into a building that takes up one space) is unique to board games, it comes from a couple of different ideas. The first is the app 2048, or its older sibling Threes. When I first played 2048 and saw the way the tiles combined to make something new, I immediately found myself wondering whether that mechanic could be used in a board game. I also drew inspiration from the crafting system in Minecraft whereby players arrange resources in different shapes to create a vast library of items. It's somewhere between those two ideas that I got the building mechanic for Tiny Towns, and I think that's what gives it its app-like feeling. 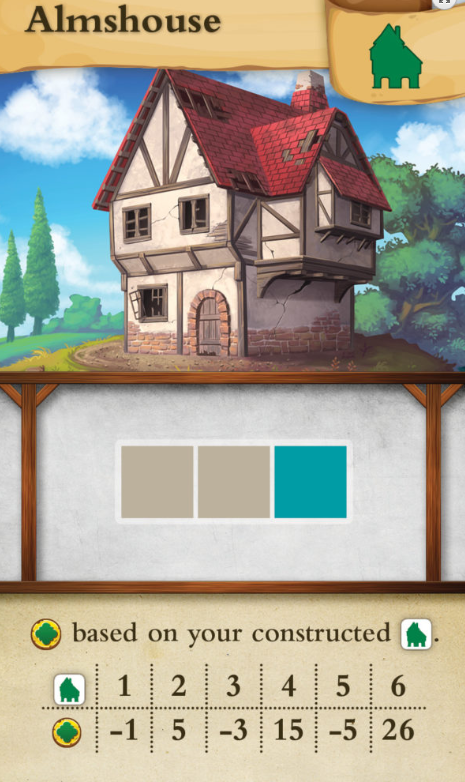 A sample building card that may get flipped during your game. Don't worry, there are many different buildings so that each can game can feel different.

3 – This is the first board game that you’ve designed, or at least gotten published. What was it like to bring a prototype to a convention and pitch it? How was that process?

Honestly, it was a ton of fun. I'd had other designs before, but none that survived past 10 playtests or so. Though I had been working on Tiny Towns for about a year and a half before going to PAX Unplugged 2017, I wasn't expecting to find a publisher for it then. I was treating PAX as a learning experience--it was my first game convention, and I knew that signing a game can take time. I did a fair amount of homework beforehand, reading a lot of pieces about pitching and sell sheets by people like James Mathe, Sen-Foong Lim, and Jay Cormier. The pitching itself was a blast. I had arranged meeting with several publishers beforehand, and Tiny Towns is quick enough that I could show them a full game within a 30-minute pitch. When I was pitching to AEG, I remember the COO, Ryan Dancey, saying "I've never seen anything like this before," or something similar. That was so cool to hear, and I came away from that pitch feeling very hopeful. It was my last pitch of the con, right before I got in the car to head home--a great way to end an awesome weekend. A few weeks later, AEG emailed letting me know they wanted to sign Tiny Towns.

4 – The game still isn’t out for a few more months: does it feel real yet, or is there still a little imposter’s syndrome left?

It's starting to feel real as I'm seeing more and more reviewers posting pictures of the game, but that doesn't mean I don't have serious imposter syndrome. I just feel like I've gotten really lucky with every part of my journey with Tiny Towns--the initial idea worked pretty well, I only had to go through one round of pitching, and AEG has produced what looks like a deluxe version of the game just a year after I pitched it. PAX Unplugged 2018 was actually the first time I saw a pre-production copy of it--I think that's when I started to believe that Tiny Towns was a "real" game. 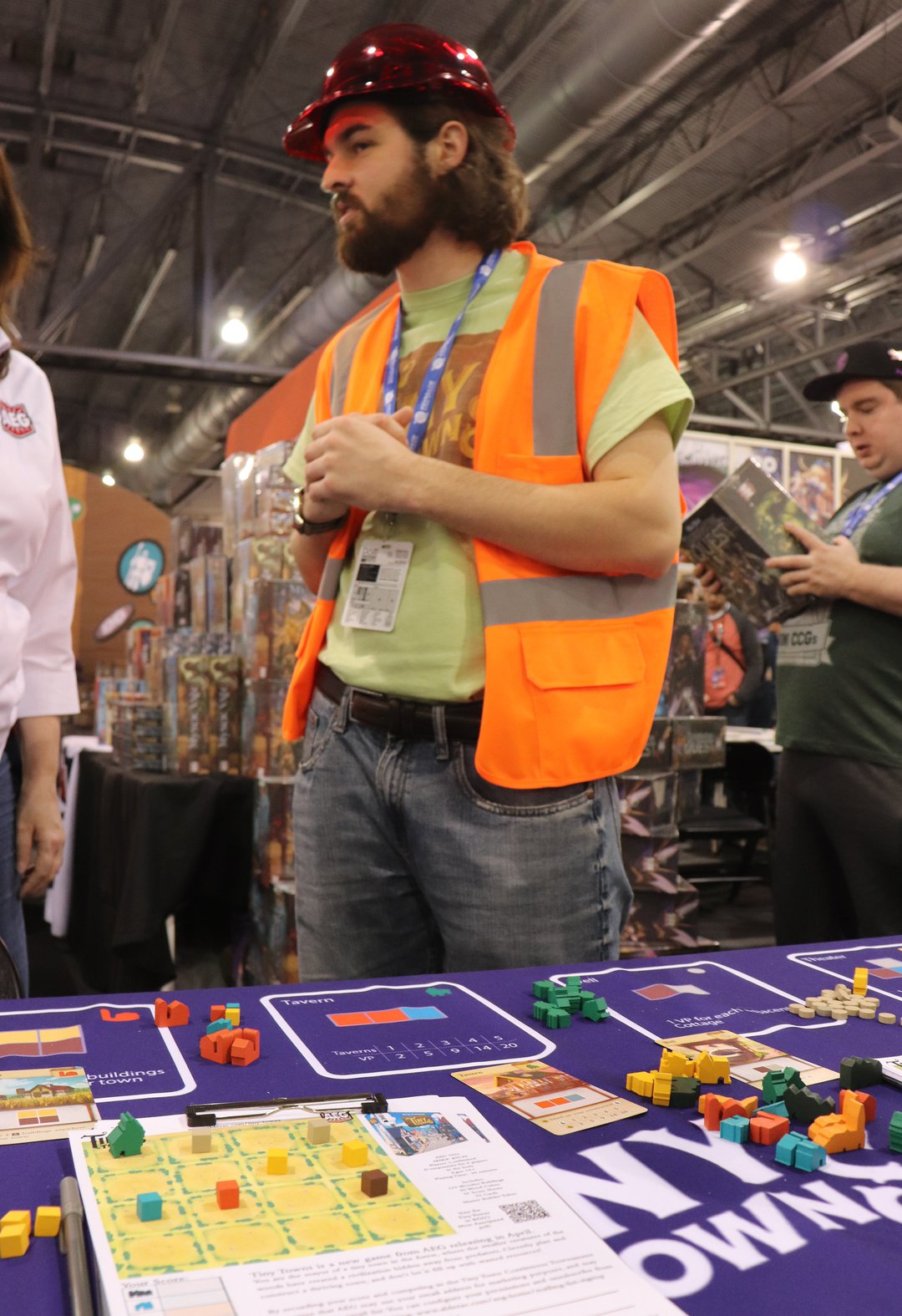 I'm a huge fan of conventions, if just for the reason that you can play a game with the designer coaching you!

5 – Do you think Tiny Towns is the start of a full career in game design? Do you see yourself making a totally different game, or trying to expand with this game style for a while?

I would love that if I can pull it off. I had a brief job this past summer as a board game designer for an education company, so I know that making and testing games 24/7 is something I would love to do again. I know it's not easy to make a living by solely designing board games--I see people like Erika Bouyouris churning out game after game and am just blown away. While I would love to have 3 or 4 games coming out per year like she does, I think I design much slower than that. I hope to focus on Tiny Towns for a while, as I think there are a lot of expansion possibilities. But I do have a couple of other designs that are close to finished that I hope to get signed someday.

6 – If you had any advice for those of us with game prototypes withering away in a closet somewhere, what would it be?

Take that prototype out of the closet and play it! I am a firm believer in playtesting early and often. I make my early prototypes as cheap, fast, and ugly as possible so I can change them without much remorse. I think that playtesting doesn't have to mean convincing your friends and family to play either. I learn a lot from playtests where I'm just simulating player decisions and figuring out what works and what definitely doesn't. That way, when I finally show other people my prototype, I know it won't totally go off the rails.

Something In April To Look Forward to

As per the Alderac Entertainment Group website, we can expect Tiny Towns to come out in April 2019. I'm looking forward to it, just because I think it'll be fun to play at my weekly bar night; it has an easy concept with a lot of options and a lot of fun flavor. It feels welcoming and inviting, just like the designer was at the convention. Hopefully, that's what many others will think as well.