Mech Combat Tactics With A Twist

“Phantom Brigade?” I skeptically asked Wyatt. “That mech game where you can see the future?”

“Yep,” our fearless leader answered. “It seems up your alley.”

“Isn’t that company a little too big for us?” I questioned, looking across the show floor at giant screens showing beautifully rendered mechs and intense action sequences. We got our start covering in the indie megabooth years ago, and that’s typically our wheelhouse. We’re press, but we aren’t Kotaku.

“They’re actually a pretty small studio. Phantom Brigade has a team of about five developers working on it; maybe about 15 people total? They’ve just been working on it for years.”

That was the conversation that Wyatt and I had as we made our way to Brace Yourself Games’s booth at PAX East.

I’d seen the booth in passing, but hadn’t stopped in before our scheduled interview. Between the impressive visuals and smooth gameplay of Phantom Brigade, and the fact that they had managed to get the rights to The Legend of Zelda in order to make Cadence of Hyrule (I suspect dark magic), I was figuring that Brace Yourself was a massive studio who’d somehow slipped under my radar. But, no, it turns out that they’re a tiny company from Vancouver with some big dreams.

Wait, Go Back To The Mechs Who Can See The Future

The story of Phantom Brigade is that you are leading a vastly outnumbered and outgunned resistance force on a campaign to retake your homeland. The odds are stacked so high against you and your handful of mechs that it should be all but impossible, but you have an ace in the hole: a highly advanced computer that predicts where your enemies will be and what they will do, enabling you to make the perfect moves to counter them. 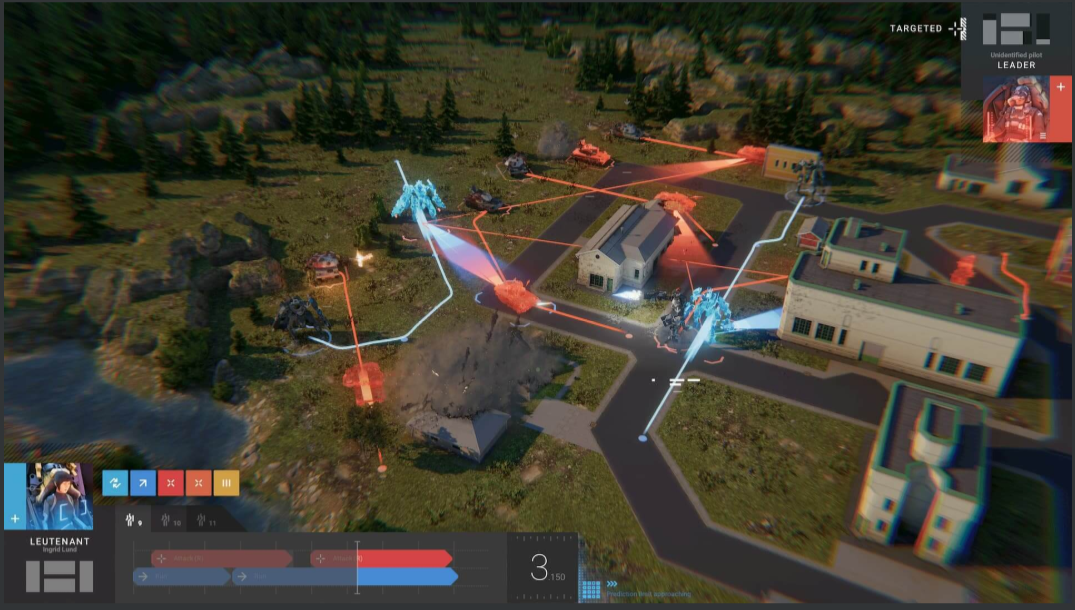 You know that thing the Wing Zero has where it shows the pilot how a battle is going to play out? You've basically got one of those.

If that’s the case, you might ask yourself, how is it even possible to lose? Well, there are a few things working against you. First of all, even if you know what your enemies are going to do, there are still a lot of them. Knowing that they’re about to surround you and gun you down doesn’t help if you can’t do something about it.

Secondly, the system only sees a few seconds into the future. Phantom Brigade is a turn-based game after all, and your mech will only show you your enemies’ next turn. Just responding to what’s happening at that moment isn’t good enough, you have to make sure you’re not putting yourself into an even worse situation. After you've keyed in your attacks, you get to watch the combat play out on the battlefield; this of course can be painful when you've made a critical error.

Finally, your computer isn’t perfect. While it’s spot-on most of the time, it can make mistakes, or your enemies may have a chance to react to what you’re doing. You might find yourself shooting at an enemy that isn’t there yet, or juking into an attack instead of away from it. 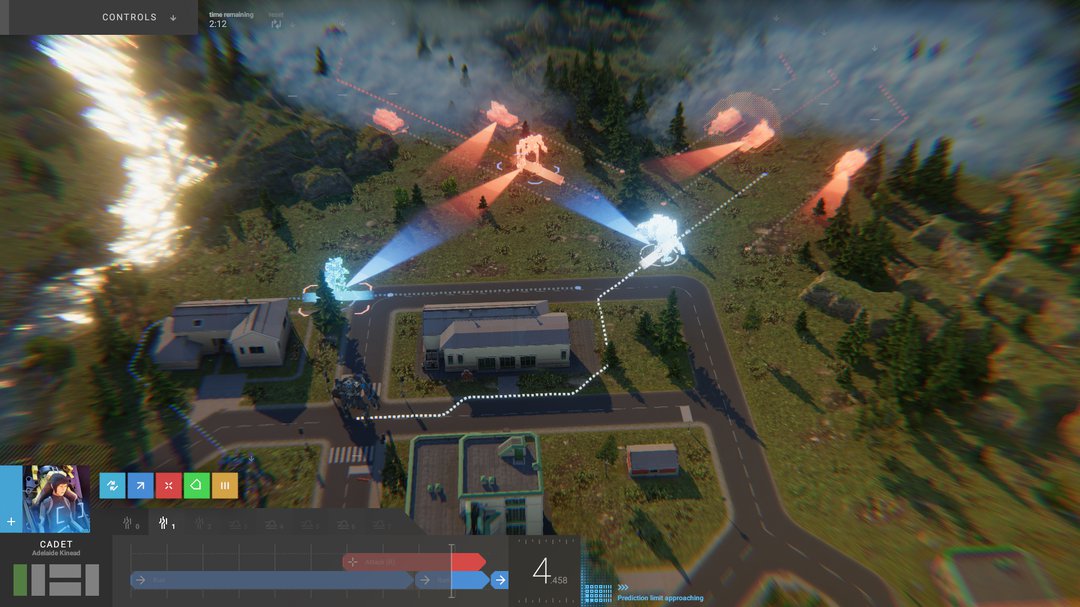 Those bars at the bottom of the screen show how individual seconds will play out according to your predictions. Pairing up your actions to compensate for their tactics is the only way you'll manage to win.

Finally, your computer isn’t perfect. While it’s spot-on most of the time, it can make mistakes, or your enemies may have a chance to react to what you’re doing. You might find yourself shooting at an enemy that isn’t there yet, or juking into an attack instead of away from it.

Squad Tactics And Playing With The Odds

It’s a really fun premise that makes you both feel completely badass and also very worried about how you are going to survive terrible odds. There’s also a chance you might be asking yourself: “Alright, seeing a few seconds into the future is a cool gimmick, but how does Phantom Brigade actually play?”

We had a chance to go hands on as we sat down with Ryan Clark, the founder of Brace Yourself Games and designer of Crypt of the Necrodancer. He was passionate about the projects he had brought to PAX East, and one refrain kept coming up in our conversations with him: “I saw a genre I liked, but no one had done it quite this way before”. With that in mind, we got our hands on the keyboard to see exactly what he meant.

Phantom Brigade is, to break it down simplistically, an evolution of typical tactics games like XCOM, made with the intent to become something that feels more intense and fluid. Instead of having turns broken up into individual actions that happen one by one, you’re given a timeline that you can scroll along. As you move back and forth along the timeline it will show you what your opponents are doing, and you can precisely program in the actions you want to take. Then, once you finalize your decisions, all the units act at the same time. 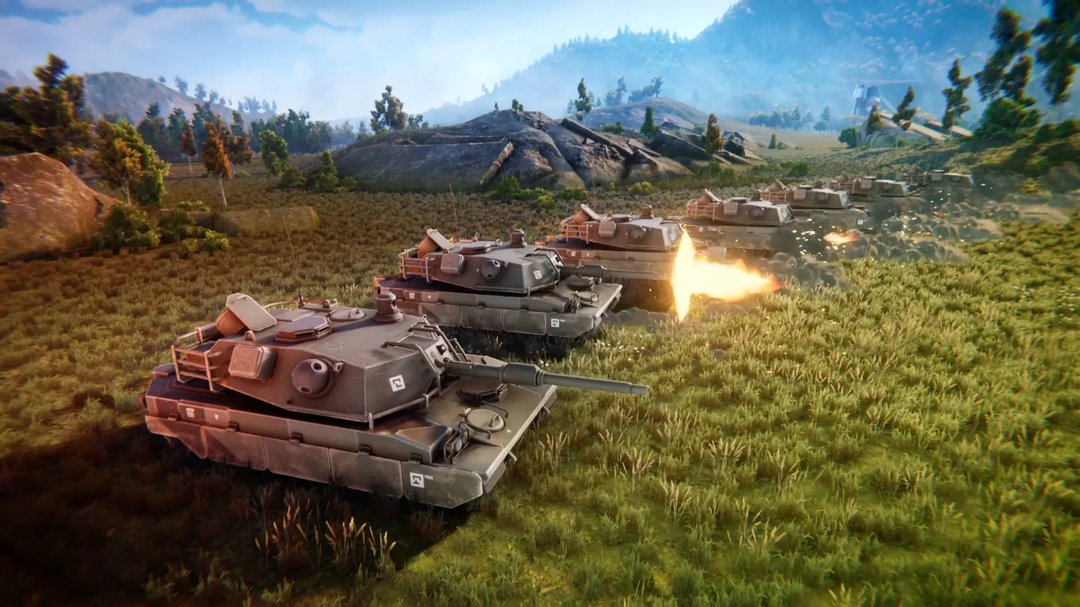 While you are the ones with high tech mechs, remember that your foe always has more raw firepower at the start of the match. Its up to you to whittle that down to size.

Ryan kept coming back to the how he wanted to make the player feel powerful and in the action, becoming dramatically involved and feeling like they could control the situation. For example, where you choose to fire becomes a cone of effect: There is no miss chance if you are able to anticipate where enemies are, but you still have to try and plan where to target to get maximum damage.

Cause And Effect Write Large

Even in the middle of a convention, the combat was engaging and fun… even if I got my butt handed to me. For the demo, I only had two mechs, while they had a handful of tanks and one mech as their leader. While I was advised by Ryan to go around the far side of the buildings to attack their side, I felt as though my mech with a massive shield could go up the middle for some dramatic heroic action.

This was a mistake.

I had been warned about the dangers of being outnumbered, and so a wave of gunfire hit. I wrecked two tanks, but learned firsthand how mechs have multiple hitboxes: suddenly I was missing an arm. I learned how to use my shield-equipped unit effectively very quickly, setting the shield to absorb fire to let me counter, but the tide was already turned.

I can't wait to get a chance to customize my own mechs, giving me a chance to bring the tools I want to the job.

Behind me, Ryan and Wyatt were calmly talking about how in the full game you will be able to melee with the shield and the importance of targeting weapons or various mech parts as I was slowly being taken apart. I had my one mech lose both arms, so I ran them full speed into a tank to force them to drive into a nearby building, crippling it. Needless to say, I lost the demo game. But it was a glorious loss, where I saw just how much the dev team behind Phantom Brigade put into showcasing the David vs. Goliath feeling you get during combat. You are going to be able to win, but you’ll have to play smart, and hit with precision.

As I watched my pilot’s eject from my shattered, unrepairable mechs, I took heart in the fact that when Phantom Brigade is fully released, I’d be able to detonate them as one last middle finger to the invading army.

Phantom Brigade Lives Up To Its Great Graphics And Bold Goals

Our time with Phantom Brigade was fantastic. It played as fluidly it seems to play in the trailer, and the combat felt tough but rewarding. Of course, we didn’t get to see the whole gameplay loop that will be available in the full game, but we were able to talk to Ryan about that directly. If it is anything close to as polished as the combat, this could be one of our favorite games of the year.

A full playthrough of Phantom Brigade - if you are successful - will take about 6-10 hours when finished. While this seems short, both of us were shocked when Ryan went on to explain that much of the campaign is procedural in its content, meaning levels will not be identical on multiple playthroughs. This is especially impressive when you take into account how the game has to showcase your faction’s predictive AI to anticipate enemies moves. 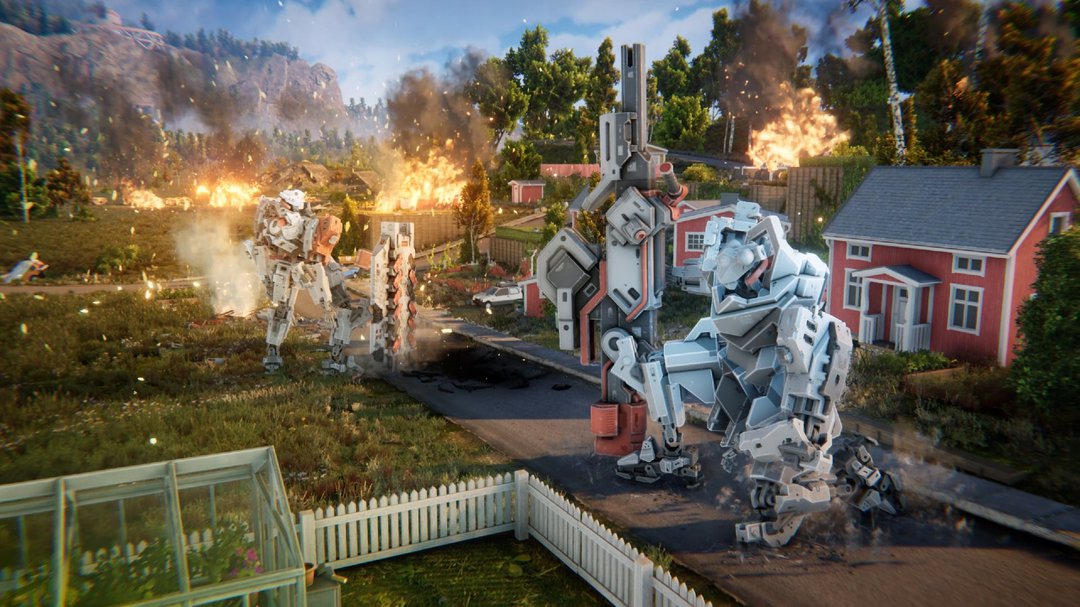 The procedural part will become addictive when we get to see the planning stage between each missions: slotting your limited number of pilots into mechs, choosing what weapons and upgrades to put your resources into, and so on. This will feed into combat missions: when will you want to evacuate a mission to make sure your mechs survive? Is it more valuable to sacrifice a pilot to get the job done?

We were blown away by what Brace Yourself Games is trying to accomplish with Phantom Brigade. For such a small team, the gameplay and art is phenomenal, and the project is incredibly ambitious. We were told to expect an early access release date of summer 2020; if Phantom Brigade lives up to what we saw at PAX East this year, expect us to be some of the first to buy the game.