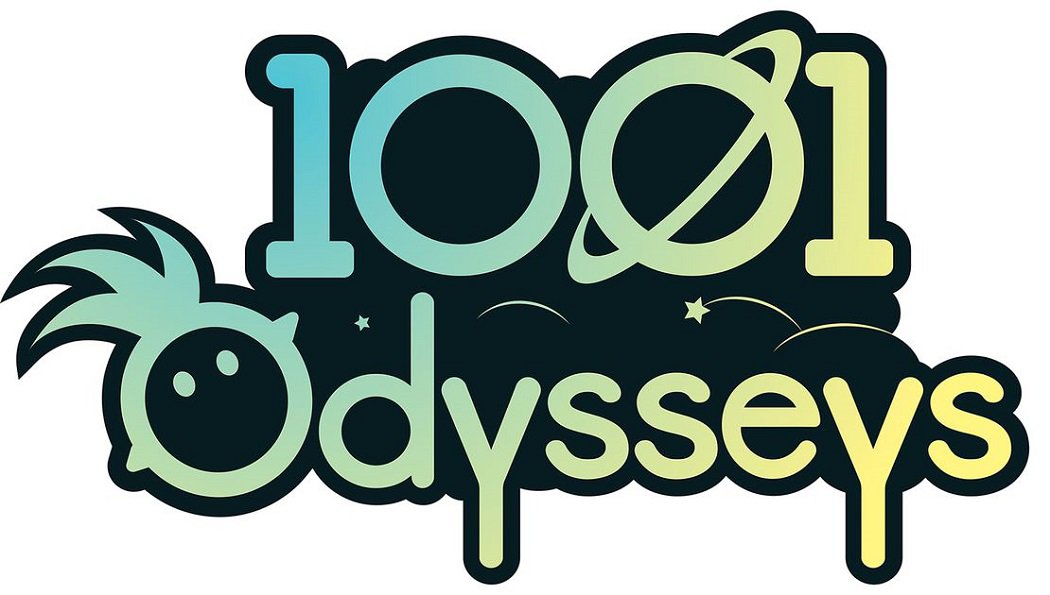 We at Sprites and Dice love Tales of the Arabian Nights, but I can’t deny that it’s showing its age. It has some amazing ideas, but a lot of the mechanics and themes can end up feeling antiquated; In particular, the rule that you can’t win if your gender has been changed is upsetting to a lot of people, for obvious reasons. So when I heard about a storytelling game whose very name evoked that classic at PAX Unplugged, of course I had to check it out.

1001 Odysseys by Asmadi Games is an adventure game where you and your friends become the crew of the spaceship Odyssey, travel to various whimsical places, interact with the people and things there, and eventually reach one of many possible endings. Like Tales of the Arabian Nights, the story is told through short passages that one of the players reads out of a book, while the gameplay - such as it is - consists of going to a location and choosing an action to do there, then listening to the result. 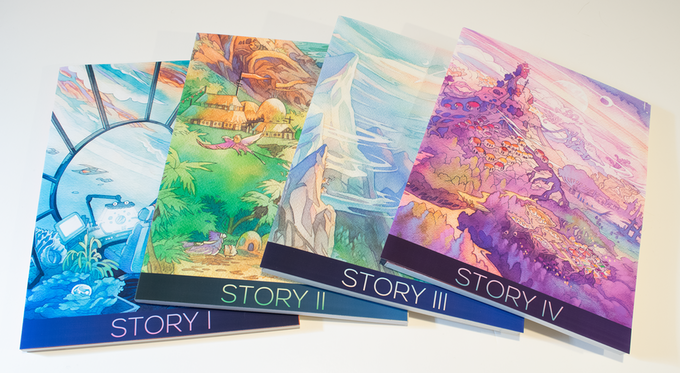 Unlike Arabian Nights, however, 1001 Odysseys is fully cooperative. Each player takes on the role of a different crew member and you all experience the story together. Technically each crew member has different abilities: One pilots, another keeps a ship’s log, etc. There are five roles in all, including the Captain, who is responsible for choosing who reads from the storybook and for breaking ties in case of a vote. I say that they “technically” have different abilities because nobody can do anything without approval from the crew as a whole. In practice, what it means is that each player has a different job to help keep the game running smoothly. One player keeps track of the story’s progression, another updates the map as new locations are discovered, and so on.

Depending on where you go and what you do, the game will give you certain letters to slot into the game board. When you have a full set of four letters, they will guide you to a particular passage to end your current chapter and start the next one. There are multiple possible routes through each story, some of which will completely change what happens in the next chapter. If you’re not happy with where you ended up, or if you’re just curious to see what happens, the game itself encourages you to go back and replay chapters to find new possibilities.

1001 Odysseys features a large world with a lot to explore, filled with trippy art and whimsy.

1001 Odysseys is a very laid-back experience. As far as I know there’s not even a way to lose the game, you just find different endings. It would be perfect for a quiet game night with friends or family, and maybe a few drinks. I would like to say it’s a great choice for younger children, but the storybook sometimes uses fairly advanced language; unless your kids have exceptional vocabularies, they might end up feeling lost.

Why A Board Game?

I mostly enjoyed trying out 1001 Odysseys at PAX Unplugged, but I had to ask: why make it a board game? The pattern of going around to different places, backtracking, looking for the right person to talk to or the right plot element to poke... it all felt very familiar, but not from board gaming. More than anything, it felt like I was playing an old point-and-click adventure game. Additionally, if it were a computer game, all of the mapping, recording, and story passages could be automated. It just didn’t seem like this was the best format for the experience.

I mentioned this to the game dev who was there, and asked what he felt was added by making it a board game instead of a computer game. His answer was, simply, “community.” The team behind 1001 Odysseys envisioned it as a way to bring people together for a relaxing, enjoyable time. 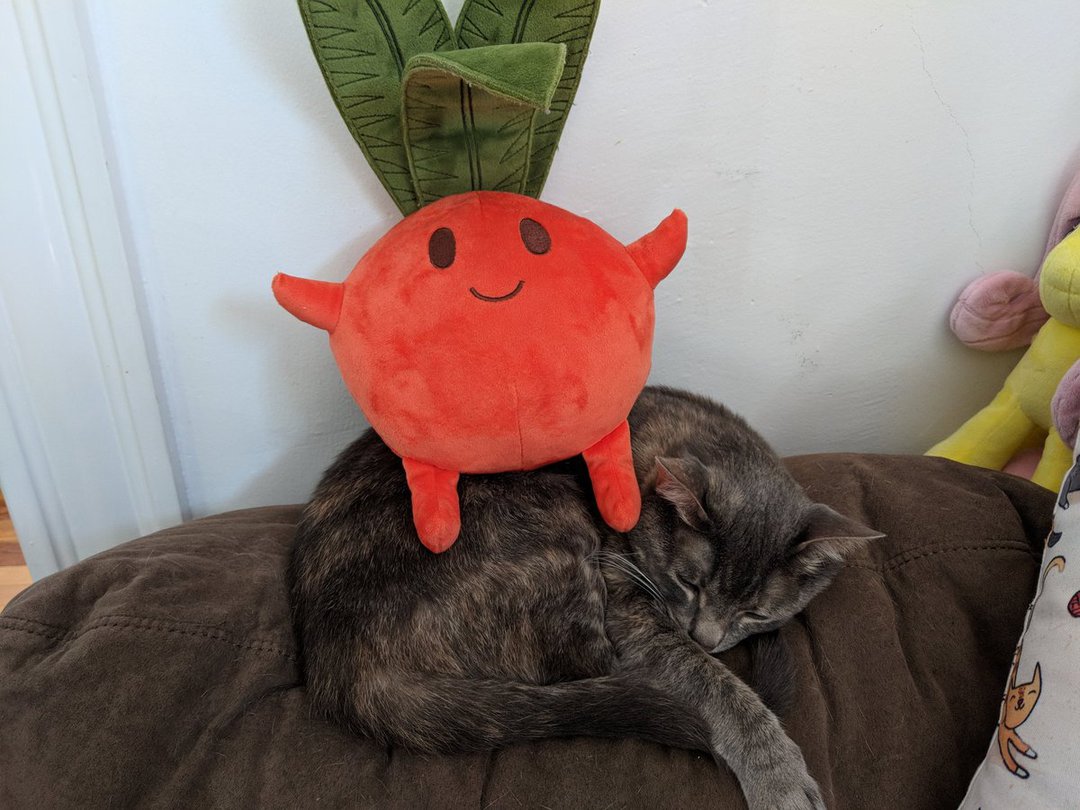 I’m still not convinced that a board game was the best vessel (no pun intended) for this concept, but I see and appreciate where they are coming from. It’s also entirely possible that by playing in a noisy convention center with a group of strangers, I missed out on a large part of what could make this a great experience.

The Odyssey Has Already Begun

1001 Odysseys has been on Kickstarter for a week, but Asmadi Games has had a sort of crowdsourced RPG running for some time already on their website. It will have no effect on your personal game, but it’s just a fun little thing Asmadi is doing with their fans. They really are serious about trying to make this about building a community, together. 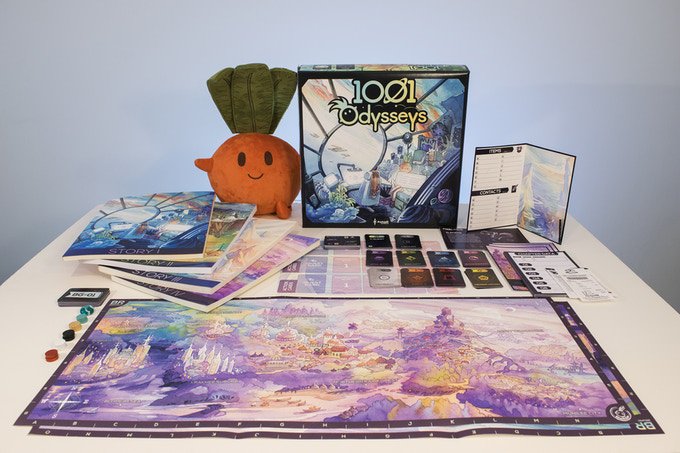 So what are my final thoughts on 1001 Odysseys? I’ll be honest, I don’t love it. I like it, and I see how it could be very enjoyable with the right group, but something wasn’t quite there in the demo I played. Maybe it’s because I was hoping for another Tales of the Arabian Nights, and the cooperative nature of this game makes it distinctly different even with all of the similarities. Maybe it’s just because I wasn’t in the right place for it. Regardless, this might be a game that speaks to you because of its bright art and unique take on plot.

If you’re interested in checking it out yourself, you can actually join Asmadi’s ongoing game here to get a taste of the game in action. Catch up to the story and decide what the crew of the Odyssey should do next. The 1001 Odysseys Kickstarter is going strong after just a week, so if you want to sign up to be part of the crew, you still have a little bit of time.