Bullet♥︎ (pronounced “bullet”) is Level 99 Games’s newest video-game-as-a-board-game, and this time they’re tackling the danmaku (“bullet hell”) genre. It was clearly inspired by the likes of Touhou Project and Ikaruga, but how do you translate that kind of frantic action to a tabletop experience? Designer Joshua Van Laningham came up with, perhaps, an unorthodox answer: instead of moving your heroine to thread the needle between thousands of enemy bullets, you move the bullets themselves.

Note: most images are from a Tabletop Simulator prototype of Bullet♥︎ and may not reflect the final product.

What The Shoot Is This Game? 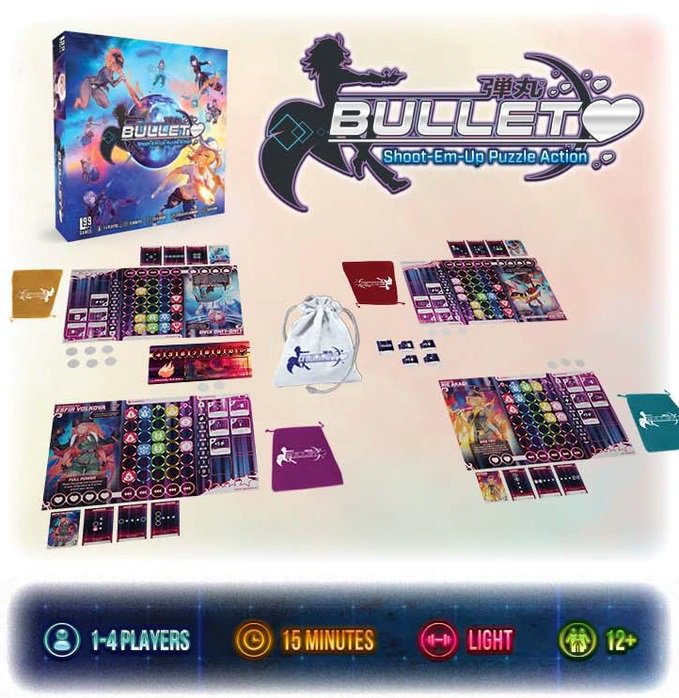 What you get with the Kickstarter.

Bullet♥︎ is a simultaneous-action puzzle game where players have to arrange incoming bullets into patterns, which they can then fire back at their opponents. Each round, players draw bullets one at a time from their own bags and place them in the corresponding spots on their boards. Each bullet has a color, indicating which column it goes into, and a number from 1-4, indicating how many free spaces down that column it goes. If you draw a 3 and don’t have 3 open spaces? Too bad, you just got shot! Get hit enough times and you’re out of the game.

So what do you do about it? Each round, each player gets 7 energy to spend on abilities that shift the bullets around, draw extra patterns, and some unique abilities. So, if you have a column getting dangerously full, you can spend some energy to move some bullets left or right and free up extra spaces. However, the real goal is to position them so that you can use your attacks. 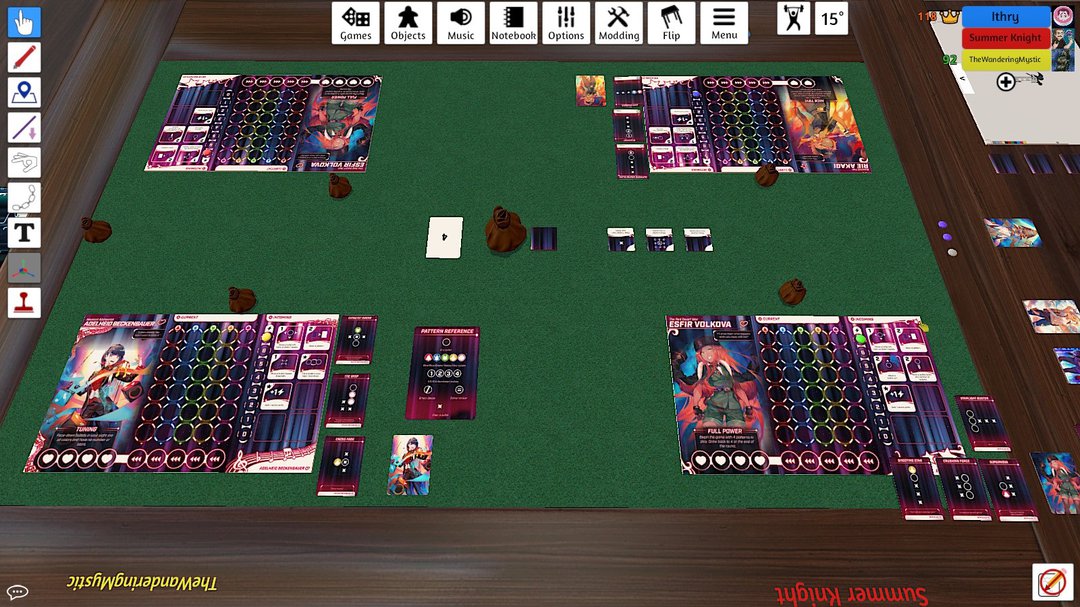 This is how we tested the game before the Kickstarter - Thanks, COVID!

Each of the eight heroines has a deck of cards. Each card has a different pattern on it and if one of your patterns matches a section of your board, you can remove those bullets and send them to another player’s bag. If any of those bullets had stars on them, you also get bonus energy so you can keep fighting!

The symbols on the pattern indicate where bullets need to be, which spaces need to be empty, and if there are any other requirements. For example, Senka has cross-hairs that she can position along with her bullets, and sometimes they’re required to complete her patterns. For other characters, sometimes bullets need to be specific colors or numbers in order to be fired. 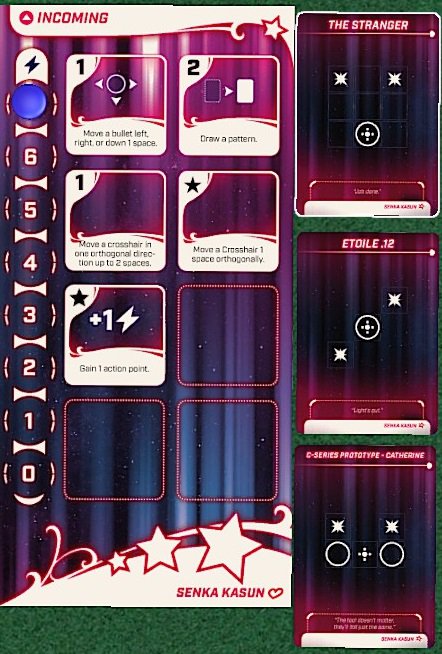 Senka's innate abilities (left) and a few of her attack patterns (right).

But, I hear you thinking, that all sounds like really slow and deliberate play; bullet hell shooters are the exact opposite of that. It’s true that Bullet♥︎ doesn’t quite have the frenetic pace of something like Touhou Project, but there is at least something encouraging you to play quickly. Each round there are extra abilities laid out in the middle of the table, and once you’re finished playing for the round you get to take one to add to your character board. That means whoever plays the fastest gets first pick of them. On the other hand, if you need to take your time and play carefully, there’s no time limit. Just be aware that you’ll be stuck with whatever ability nobody else wanted.

The round ends when all players declare that they’re done. Each player then takes a number of bullets from the middle of the table to add to their bag, along with any bullets they were given by their opponents. You take more bullets each round, so there’s a natural escalation and endpoint built into the game (as it will eventually become impossible to keep up with all the bullets). 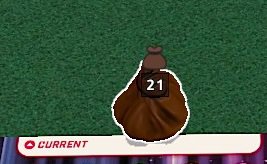 Case in point. I'm getting TWENTY ONE bullets next round?!

If there’s one thing Level 99 Games is great at, it’s cramming a lot of replayability into a small box, and Bullet♥︎ is no exception. The game comes with eight different heroines, each with their own special abilities and unique playstyle. That’s a pretty good start, but what really impressed me was the fact that there are four different game modes.

The demo we played was a standard free-for-all. The object of that game is to stay alive as long as possible, feed as many bullets as you can to your opponents, and be the last one standing. There’s also a 2v2 team mode. The rules are mostly the same, except that you also get abilities that help out your teammate. As before, last team standing wins.

Bullet♥︎ also features a score attack solo mode, where a single player just tries to stay alive and clear as many rounds as possible. Where the alternate game modes really get interesting, though, is the boss battle co-op. Each of the eight heroines has an alternate side, a superpowered NPC boss that up to four people can team up to fight against. 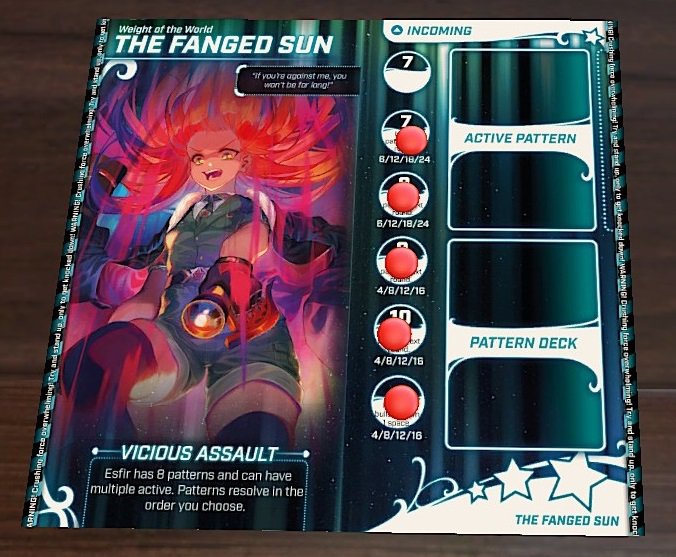 The art by Usanekorin (of Collateral Damage Studios) really carries the theme.

It’s great that Bullet♥︎ has replayability baked into it, because it doesn’t last very long. It’s a fairly light game that will likely last anywhere from half an hour to an hour, depending on how quickly your group plays.

Still, never let it be said that Level 99 doesn’t try to give you your money’s worth.

A Hit And A Miss?

While the theme is spot-on for the bullet hell genre, the mechanics actually reminded me more of Puyo Puyo Tetris (or Doctor Robotnik’s Mean Bean Machine, if you’re cool like me). You arrange blocks into patterns, clear them, and give extra junk to your opponents. Even the damage comes from letting your pieces stack up too high, rather than being in the wrong place at the wrong time. These are all hallmarks of puzzle battlers rather than danmaku shoot-em-ups.

I want to be clear that I don’t think this is necessarily a bad thing. I had a blast playing Bullet♥︎, and I certainly recommend checking out the Kickstarter (as evidenced by the fact that I wrote this article). However, I do want to be sure that our readers know what kind of game they’re buying if they pick up Bullet♥︎. This is a fun game that tantalizes with its ideas, but you have to remember that a board game is going to have a very hard time perfectly emulating a video game style where if you blink, you die. 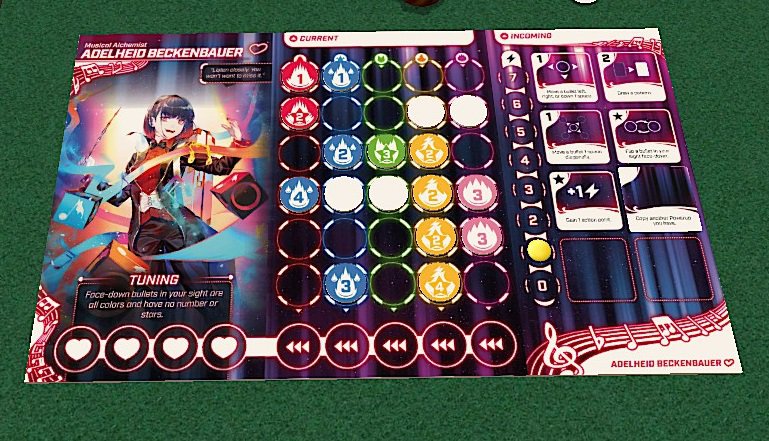 What it starts to look like in the late game. In fact, this was the round I died on.

It was fun playing Bullet♥︎ in Tabletop Simulator, and I think it would be a great addition to an in-person game night - I can only imagine that it would be even better playing with physical pieces. When I mentioned that I’d bet Bullet♥︎ is really satisfying to play with some good, weighty chips like the ones in Splendor, I was informed that they’ll be offering deluxe wooden bullets for an additional charge (the standard ones are punch board). That will be great news for some, and frustrating news for others.

The prices for Bullet♥︎ are $40 for the base game and an extra $20 for the deluxe bullets. The game is perfectly playable without them, but if you’re a tactile sort of person then the extra cost might be worth it. As for the game itself, $40 seems very fair for what you are getting on the table. If the concept and theme sound really fun to you, I think its absolutely worth a look.

For more information and to check out this interesting new game for yourself, head over to the Kickstarter page. Hopefully once we can all leave our houses, I'll have a chance to really play this game one day in person.