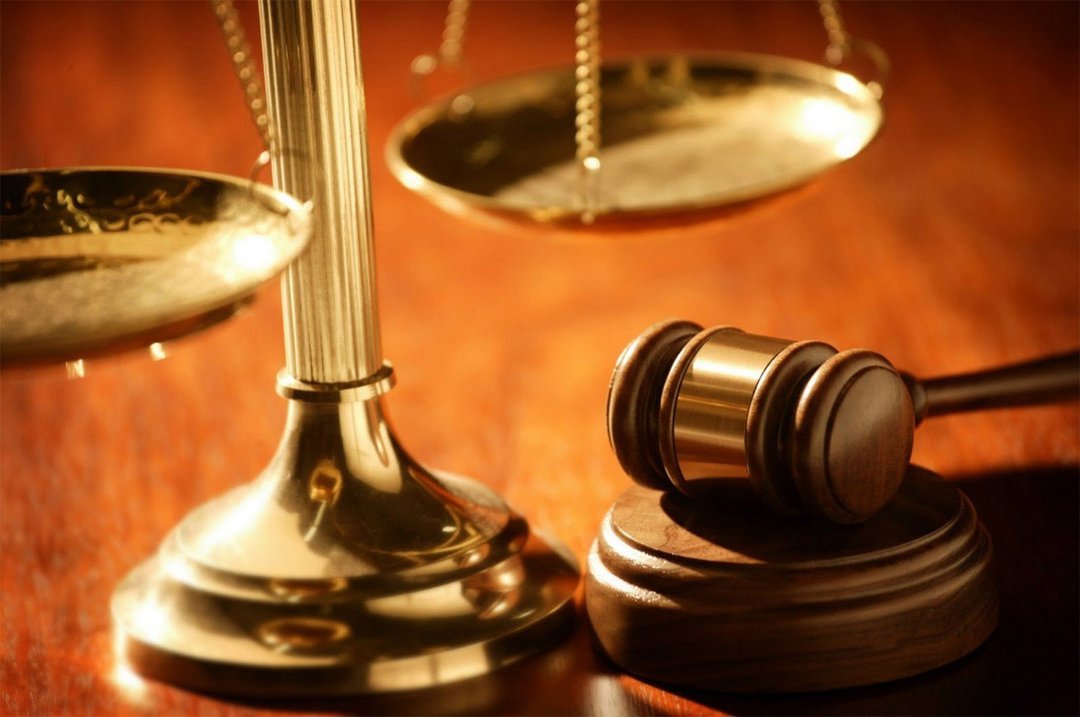 If there’s anything board gamers love, it’s fancy miniatures. When Overturn: Rising Sands appeared on Kickstarter in June promising just that and more at a low price, backers flocked to the project and funded it in under two hours. But now, the promising package has been 86’d following sketchy behavior from its developers, including plagiarism.

Nobody can blame backers for flooding the project with cash as fast as they did, it was promising beyond belief. The core box of the game was supposed to come with 70 miniatures, 500 cards and more, all for the price of $89. However, the more attention the game got, the more people actually started looking at it, and that’s when the project’s troubles began. 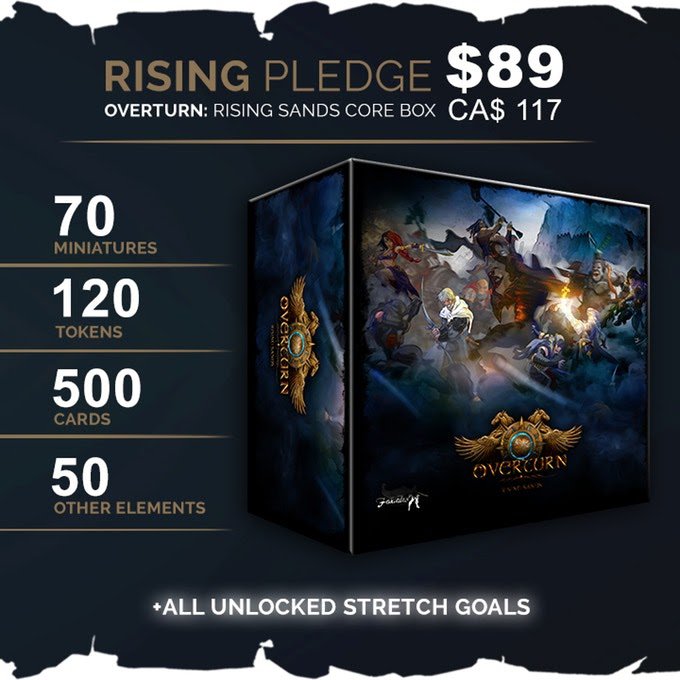 The promise of a game like this for $89 was too good for some backers to pass up.

For starters, the project is listed as being made in Canada, even though its developers don’t live there. In a developer Q&A, members of Foxtails Studios, a brand new development company behind Overturn: Rising Sands, revealed that they were in fact based in Pakistan. Currently, Kickstarter projects cannot be launched from the country.

Next came the videos posted onto the game’s Kickstarter page. On June 21, a preview of the game made by Youtube user Board Game Brawl was posted to the page. Normally, this wouldn’t be an issue, except for the fact that the video started by stating that it was “a paid commercial for a game seeking funding on Kickstarter.” This video was also the only one of its kind; no other Youtubers had been given previews of the game. 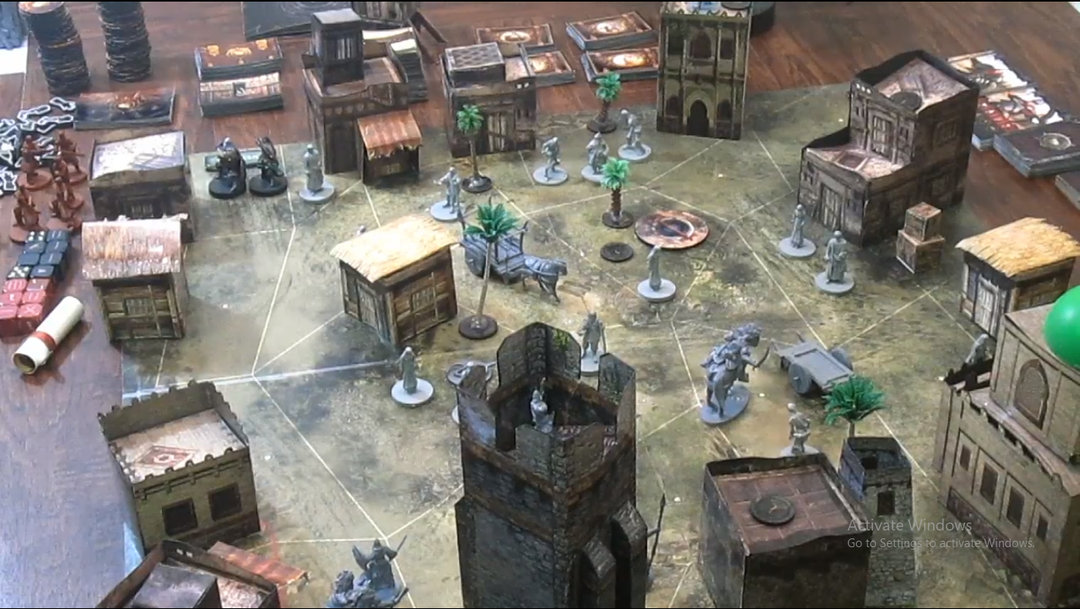 Given the price tag, some people thought backers might not ever actually see this game in hand.

When backers started asking about gameplay, another series of videos were posted to the game’s kickstarter. However, the first gameplay video did more to hurt the project and confuse backers than clarify. There’s so much wrong here I feel like I need to make a list. The video looks as though it was shot on a phone camera, which is an immediate red flag, it’s extremely unprofessional to display so little in a low resolution. Not that the game needed any help looking bad, it did that by itself. The structures in the game, its various buildings and walls on the game board, looked slapshod. One building in particular looked like it was roughly cobbled together with cardboard, tape, and half of a green ball (to pass as a dome maybe). And I haven’t even mentioned the static over the entirety of the video that garbles up most of the audio. After releasing this rocky debut of their gameplay, Foxtails put out two more gameplay videos, both shot on a camera with cleaner video and audio.

But what truly ended the game’s short life on Kickstarter were the constant allegations of plagiarism. After backers started asking about rules (the developers only released parts of the game when backers raised questions), Foxtails quickly put out what they called an “alpha version” of their rule book. However, some eagle-eyed fans spotted something strange: a number of similarities between the layout of the rules book and some of its contents to other games. As it turned out, they were right. Large sections of the game’s rules were taken straight from CMON’s Massive Darkness. Soon after this discovery, Kickstarter pulled funding for the game, which was and is still shown as, $100,000 past its goal. 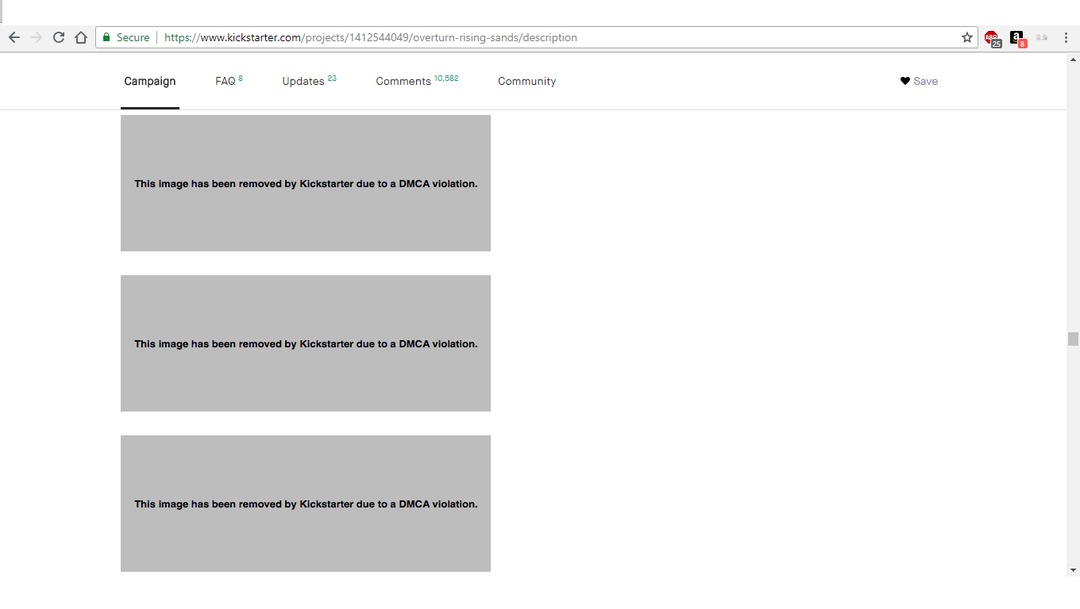 Parts of Overturn’s Kickstarter page have since been taken down due to a DMCA claim by CMON.

In response, the developers of Overturn: Rising Sands put out a statement in which they said any plagiarism was accidental, caused in part by their poor English speaking and by a freelancer that was hired to translate the manual. If Foxtails was hoping this response would ease them from any scrutiny, they were wrong. Backers still found fault with the developers, and for all intents and purposes, the game is dead in the water.

What’s To Be Learned

If this episode in Kickstarter trickery is a lesson, it’s one of caution. Backers be wary, the story goes, for there are those out there that would tempt you with low prices and many fancy figurines. But heed not to this temptation, for they may merely be setting bait. Remember that, even though it’s treated as one, Kickstarter is not an advanced preorder system. If it wasn’t for the diligent action of people calling attention to this campaign, it might very well have remained up, taking backers’ money and likely never giving anything in return.

Be aware of what you back and who’s behind it. Look up the publishers and do your homework. If near-finaly components aren’t shown in the campaign, or if minis are only shown as 3D renders rather than rough productions, that’s red flag number one. No rulebooks being posted can be, as in this campaign, another red flag that signals caution. And never forget that sometimes things are too good to be true. If people are saying it’s too good for the price, it’s worth a little extra research before throwing your money in on day 1.

Be safe out there!