Kickstarter:
Someone Has Died

A Hilarious Twist On A Morbid Process 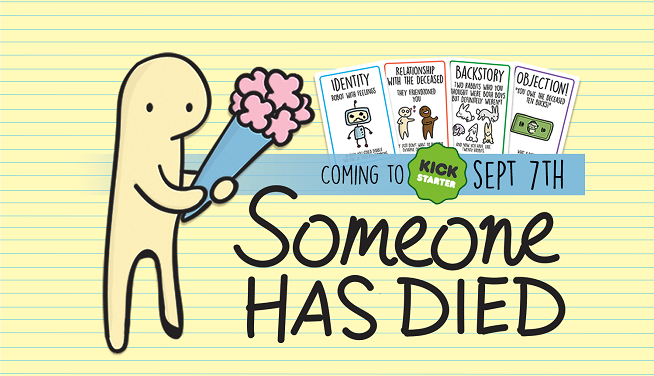 Let's be honest with ourselves for a moment: there is a lot of hassle after someone passes on. There is a funeral to arrange, loved ones to grieve with, and of course...possessions that must be doled out. It's morbid, tough, and sometimes seedy work.

But what if everyone looking for handouts was absolutely bonkers?

The Premise: A Party Game About Greed And Crazy People

The basic idea behind Someone Has Died is to take the premise of a party card game like Cards Against Humanity and smash it into a more in-depth, narrative game like Once Upon A Time. Played with 3-6 players, a full game can take a quick twenty minutes or nearly an hour if there is a lot of chatter. You can play with more, I suppose, but keep in mind that each person you add makes the game go on longer. 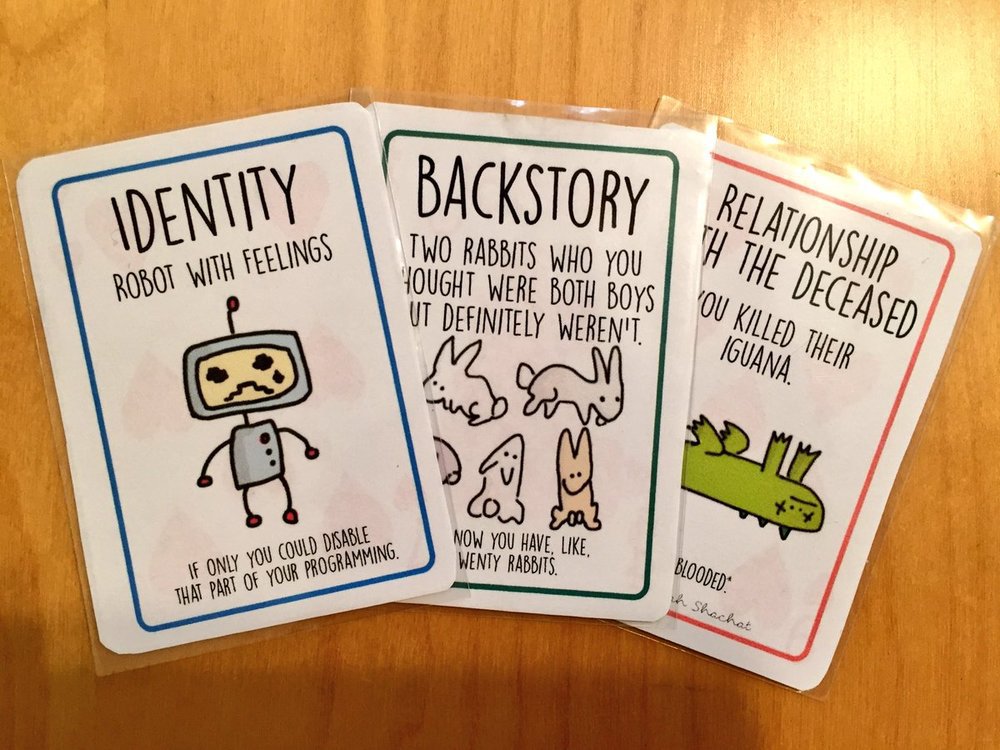 A sample of the simple, but fun art in the game. As well as some of the identities that will be keeping you on your toes.

A game starts by choosing the judge, or 'estate keeper'. They are in charge of who wins or loses, but here, they also get to weave the basic plot, directing the game to cause as much weirdness or hilarity as possible. They are in charge of the possessions of the deceased, and its up to them to come up with a little identity and backstory about this dead individual, either on their own, or by using the cards in the game. They also announce the great 'prize' that all the players are fighting over. Sure, it could just be a pile of five million dollars, but if your dead client is a woodstock hippie, for example, the 'prize' might be their collection of vintage tie-dye shirts and a Hendrix-signed guitar.

Someone Has Died is distinctly different from other party games with just a judge, because the Estate Keeper gets to set the tone and tempo for each game. This is a party game, but one with a story, and the estate keeper should always be someone that wants to tell a good tale. Once the estate keeper has set the start of the game, then it is time to play.

The Gameplay: Earning Your Inheritance...Even If You Shouldn't

The other players are individuals here to get their money's worth. They are given an identity card, a relationship card, and two backstory cards which include quirks. There is a good chance none of these cards will go together easily, but that is where the fun comes from. You have to use all of these cards as part of your opening statement, where you declare openly, to the other players and the estate keeper, why you deserve the prize.

In one game I played, I was the owner of a cute cupcake bakery that believed in alien abductions and ran a support group about it. I also had to explain that I was the deceased's parole officer, while making my claim to the inheritance all at the same time. If you think that was weird, one of my opponents was a juiced up frat boy that had gone into the stock market selling street signs...and they had to explain why they were the deceased's bully in high school. The arguments that rang out across the table, and the completely insane justifications as to why these people would show up at a funeral looking for money (or in our case, a collection of vintage skateboards) just adds to the chaos. Laughter burst out often just during that first round of opening statements, intersparsed with plenty of 'are you kidding me?!'. 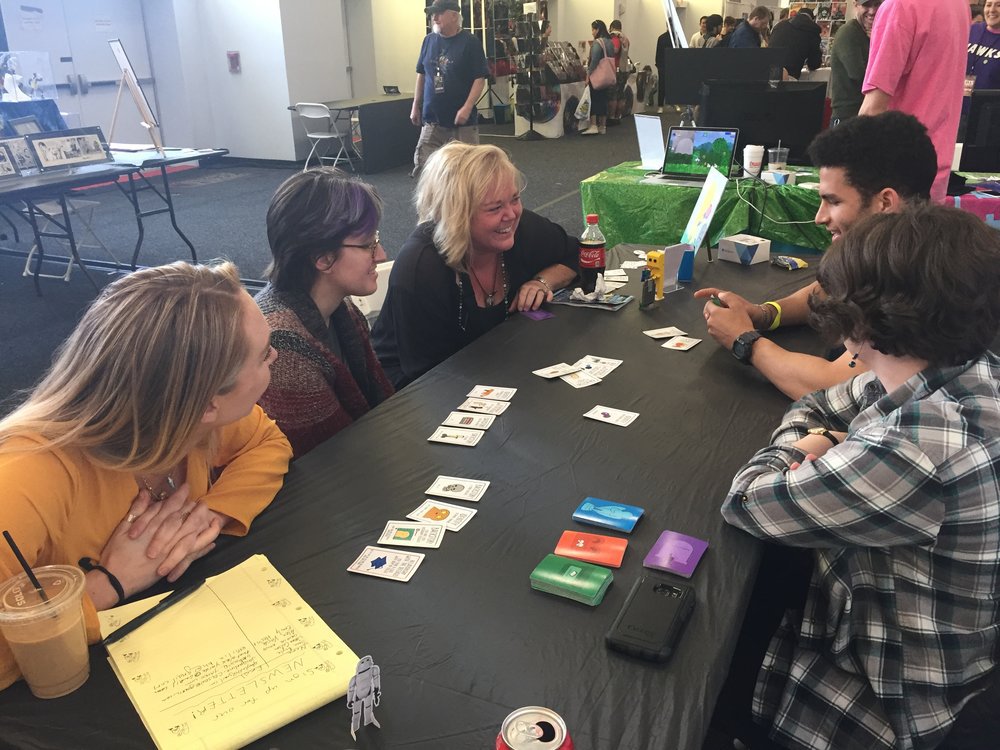 No lies here: this game is bizarre, but it takes pride in its oddities. They stack up quickly, as you go through everyone getting a chance to talk three more times - the estate keeper gets to ask a direct question to each player, and then each player gets a chance to accuse another player of why they shouldn't get their fair share. Finally, each player gets a closing statement, but keep in mind that more backstory cards are tossed out during these rounds. As a player, you have to incorporate each one into your story. As the game comes to a close, the justifications for why they should 'win' this game become more strung out and desperate, as the backstories stack, and as players defend their honor against other players. It is up to the poor estate keeper to decide how to dole out the winner of the game, and they can either simply hand the whole pot to the player who tells the best story, or split the winnings to award more than one winner, if they found one argument compelling... but another just too funny to ignore.

A Quirky Kickstarter For Those With A Twisted Sense Of Humor

After having a chance to look through all of the cards available in the prototype deck given to me, I find myself both amused and confused by this game. On one hand, this game is obscenely morbid. You, as part of it, have to make up a story about someone who is dead, and then have to plunder their remaining mortal possessions through rationalization. Some of the cards are downright out of left field, forcing you to pretend that you are a robot attempting to act as though you are human. There are Objection cards that I haven't even covered, which are a set of cards players can 'attack' each other with to make their stories even more insane. You might make one of your opponents have to play the rest of the game with a fake accent, or explain why they were at Ronald Reagan's inauguration halfway through a compelling argument. This game snowballs to a point of ridiculousness that seems impossible.

In the end, this ridiculousness is exactly the point: ever since Cards Against Humanity, party games have had a long history of being willing to delve into topics that are typically left alone in polite company. Someone Has Died pushes that a little further, forcing you to take a ridiculous theme and play it out into its own story, and the potential for laughter is incredibly high. Playing this at the bar was a great experience. I had one friend air-drumming for 25 minutes straight while trying to sell their mixtape, while another ended up stuck having to use the worst Godfather accent they could possibly manage. Bursts of laughter resounded in the halls. 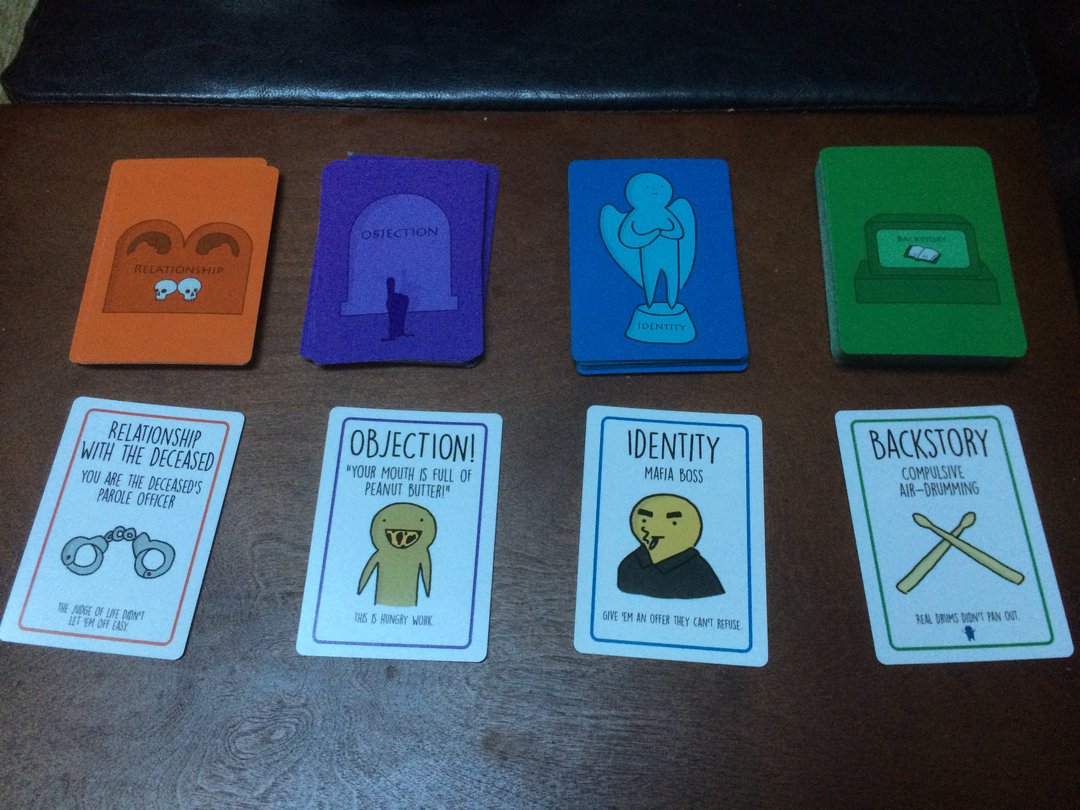 Someone Has Died is a very particular game that needs the right people to play it with. However, if you find that magical group of people who don't take themselves too seriously, and have a dark sense of humor, you are set for a wild ride. Another great great selling point is how small the box is, and the price point for the Kickstarter is only $22. It's a fun game that's worth the money, and I assure you that once you get a game going, someone is going to be grabbing their sides in uncontrollable laughter. The Kickstarter just went up September 7th, and will be up all month. Take a look for yourself, and get readyto laugh in the face of death.