The July 5th firings of two ArenaNet employees over interactions with a popular Guild Wars 2 content creator on twitter have set off a wave of reactions from both inside the world of game development and throughout the larger gaming industry. Specifically, they center on the precedent being set forth by ArenaNet.

The issue started on the 4th of July when Deroir, the content creator, suggested that ArenaNet game narrative writer Jessica Price was incorrect about an issue with writing characters in MMORPG’s. Price took offense to this, tweeting soon afterwards “Today in being a female game dev: ‘Allow me--a person who does not work with you--explain to you how you do your job.’" 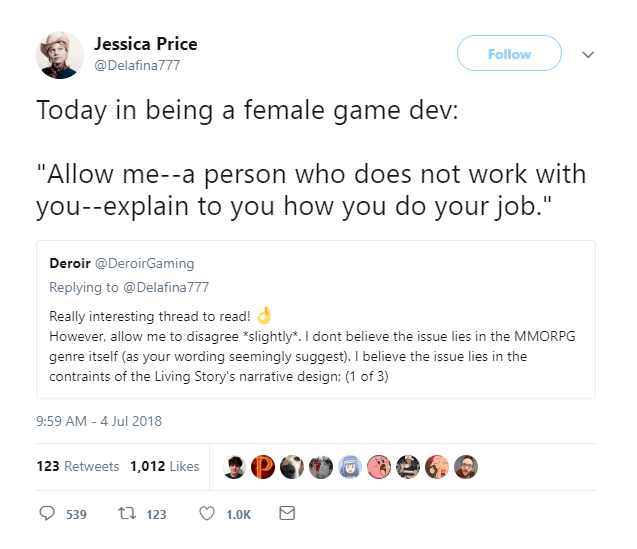 Price, and a co-worker that defended her on Twitter, Peter Fries, were fired the next day. ArenaNet president Mike O’ Brien announced the decision to remove them via the Guild Wars 2 forum, saying “Recently two of our employees failed to uphold our standards of communicating with players. Their attacks on the community were unacceptable. As a result, they’re not longer with the company.”

According to Price, this announcement didn’t just depart the two developers from the company, but openly invited harassment and incited an online mob. “They pointed to Peter and me as Enemies Of The Community,” said Price on Twitter. “That wasn’t just firing us and, oh well, if they get harassed them’s the breaks. That was an active solicitation of harassment.”

Others say that Price’s firing was prompted less by her actions and more by the fan bases’ reaction. Quickly after her confrontation with Deroir, members of the Guild Wars 2 community responded with a wave of backlash that may have hastened the decision to fire her and Fries. O’ Brien has denied this claim, saying in a statement to Polygon that the studio was closed when the disagreement between Price and Deroir happened, and that “we took action as soon as we possibly could.”

The Future Is Now

Regardless of how ArenaNet came to the conclusion to fire Price and Fries, they have now set two dangerous precedents for those in the world of game development.

By firing Price so soon after backlash started and making it appear to some that the two were correlated, instances of other online mobs attempting to get female game developers fired have popped up. Hazel Monforton, a narrative designer for Arkane Studios, posted a picture to her Twitter account on July 9th of an online petition to get her fired on the basis of her “hating gamers as a group.” There are now groups of people that are trying to get game developers they don’t like fired by feigning outrage.

Monforton’s reaction to the petition to get her fired.

In part, this phenomenon was caused by ArenaNet’s decision. By firing Price and Fries so quickly, without so much as a warning, many game developers are worried that they’re one tweet away from losing their jobs. Policies such as these place an inordinate amount of power in the hands of the company a game developer works for. Developers are constantly seen as extensions of the company they work for, and to that end, are denied the ability to speak freely. At least, this is the example being set by Arenanet.

At the time of this writing, ArenaNet has not yet responded to a request for comment regarding their social media policies.

This Won't Be The Last Word About It

What this episode truly reflects is the urgent need for game development companies to take a scrutinous look at their policies regarding employees social media and harassment. A one strike policy will simply leave devs worried, afraid that one wrong tweet will end their careers. It puts them at the beck and call of the community, which can, at least in this case, apparently do no wrong. This is yet another terrible step down for members of what was once a respected pillar of the gaming community. More and more, the people who make the games we love are being treated like no more than customer service; if we want our hobby to thrive, that's moving in the wrong direction..