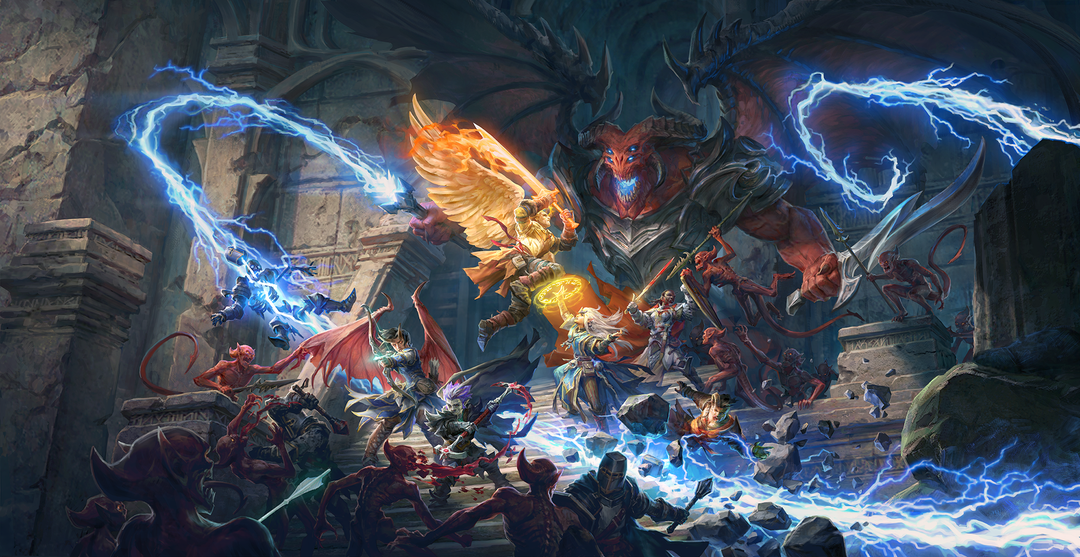 Pathfinder: Wrath of the Righteous was a first-edition adventure where players led a crusade against demon lords and their armies. This dark story asks questions like, what would it be like to live in a land that’s been ruled by demons for the past hundred years? What impact would a century of struggle against infernal powers have on the people who live there? What might have to be sacrificed to finally defeat the demons? 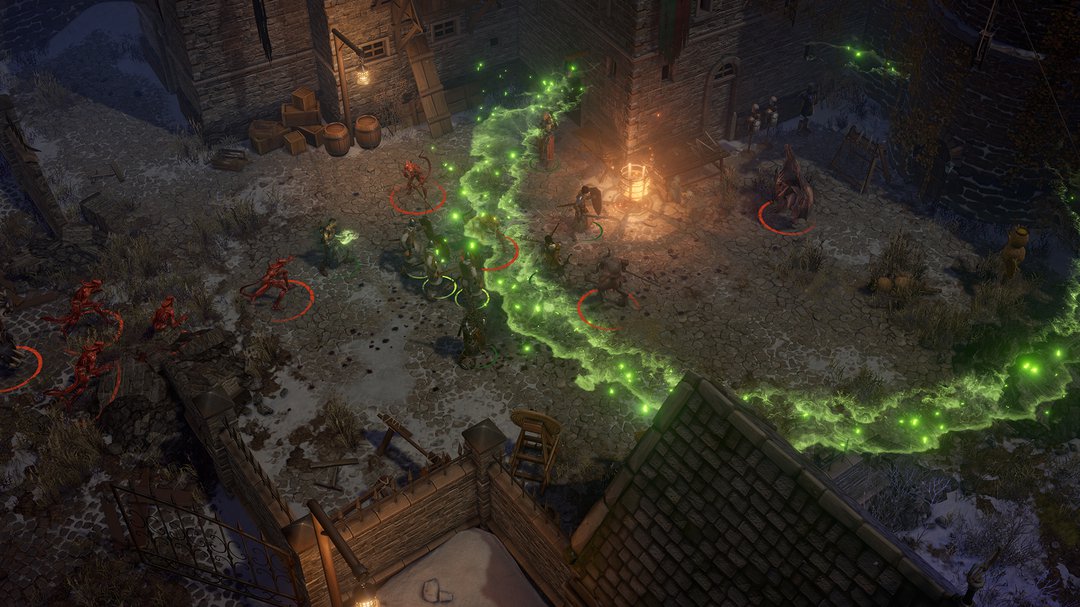 Owlcat Games, known for the CRPG Pathfinder: Kingmaker, is currently hard at work converting Wrath of the Righteous into their next big release. I had the chance to talk with one of the devs and play a short demo and PAX East, and I’m very impressed with what I saw.

The Battle For Drezen

The demo had players planning and then leading an attack to reclaim the city of Drezen, which has been under the demons’ control for some seventy years. After a brief strategy meeting where you not only have to figure out how to retake the city, but manage several characters with conflicting ideas and motivations, you begin the encounter. 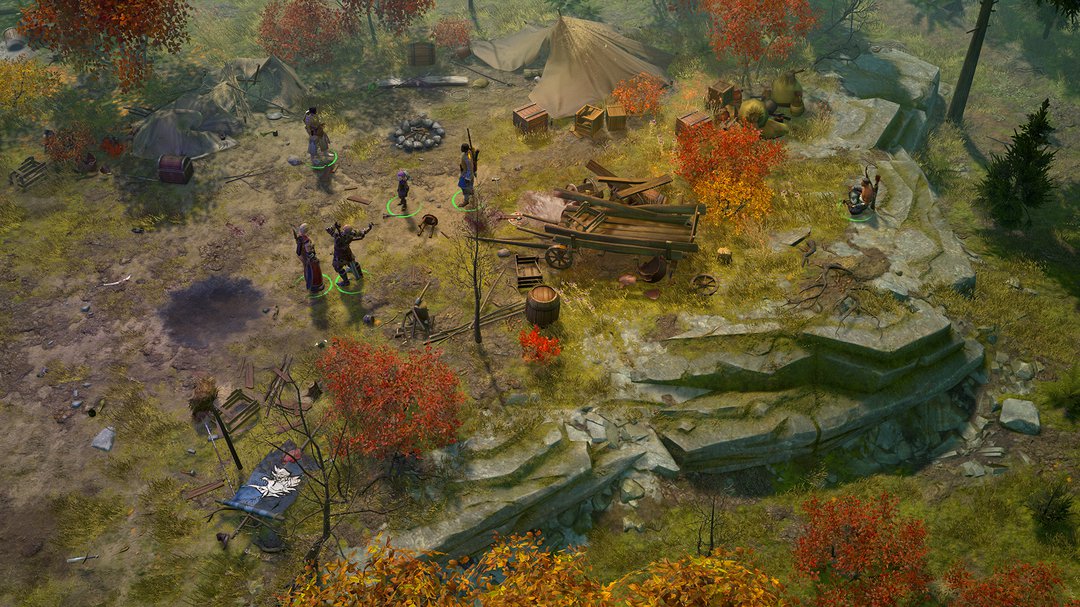 Preparing for battle is just as important as the battle itself!

One of my underlings knew of a secret path into Drezen which would let us come up behind the enemy lines, so I opted to take my small team through there while the main army of the Crusade attacked from the front. Our mission was to find the Sword of Valor, a magical banner whose power would weaken the demons and make our jobs much easier. Once that was done, we would push the attack through to the heart of the city and wipe out the demonic scourge. All in all, this part felt really good; the feeling of figuring out a path forward while also becoming more immersed in the world itself.

Wrath of the Righteous looks a bit like Diablo, but the gameplay is much closer to one of the old Shadowrun games. I had a squad of six characters - each a different Pathfinder class - and I had to manage their positions and skills to fight through the demon army. There was a hefty amount of exploring and looting along the way, but the combat was going to be the main focus.

Your characters will act on their own and use basic attacks against enemies, but if you want anything more than that you’ll have to give them orders. These can range from simple defensive actions or power attacks to spells and spell-like abilities. If you want a character to repeatedly use the same ability (such as your cleric using Channel Positive Energy to keep your party’s HP up) you can simply set it to be used every round.

Don't worry - there are plenty of flashy spell effects for everyone.

This aspect of the demo was a bit rough even with my experience playing the Pathfinder tabletop, but that could be because I had been handed a level 8 party and thrown into the action. I don’t expect it to be a problem with the actual game when you’re able to build your character and party as you go, but having to learn their powers on the fly was a little overwhelming and I definitely felt like I wasn’t leveraging their abilities as well as I should have been. The game dev set the demo on (to borrow a choice phrase from What’s Good Games) baby-ass baby mode - and it was a good thing he did, or I would have been there all day trying to clear out Drezen. 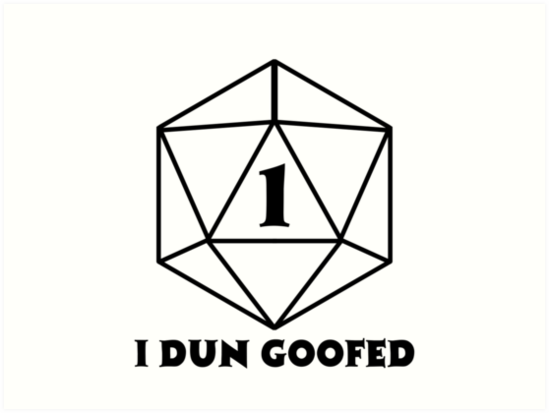 There are also d20-based skill checks, just like in the TTRPG.

The good news is that Wrath of the Righteous has a huge array of difficulty settings, ranging from what they call Story Mode - where the difficulty is nearly trivial and the player is free to simply enjoy the story - to intense tactical action where a single misstep could lead to your death. I'm always a huge fan of games that give variability options to their players.

It’s also hugely customizable; while the other characters are all programmed in, your PC is built from the ground up just as if you were playing the TTRPG. Wrath of the Righteous boasts eleven playable races, twenty-four classes, and six archetypes per class, for a whopping total of… some really big number of possible characters, and that’s not even getting into the different feat and spell options.

On top of that, Pathfinder veterans may already know that Wrath of the Righteous introduced the concept of mythic paths - ways for PCs to go beyond normal mortal limits and contend with the likes of demon lords and demigods. Appropriately enough, the Wrath CRPG will also feature eight mythic paths, allowing players to gain the powers of anything from angels to liches to dragons. Which path you choose will also have profound impacts on the story and the characters around you.

Choose wisely: you'll need every trick in your arsenal to take down the demons.

Customization was always my favorite thing about Pathfinder, so I was very happy to see that there would be so many different ways to play.

If you think this sounds like a great game, you’re not alone. The Wrath of the Righteous Kickstarter campaign is a bit more than half-over as of writing this article, and it’s already at a whopping $1.4 million! While Owlcat Games clearly doesn’t need any more funding to make this project a reality, if you want to jump in now and score some Kickstarter exclusives, you have until March 11th to do so. I'm glad I had a chance to check out the game live; if you have a chance to see it at the convention, I'd highly recommend it.