Wherein Our Heroes Adam And Eric Venture Bravely Forth 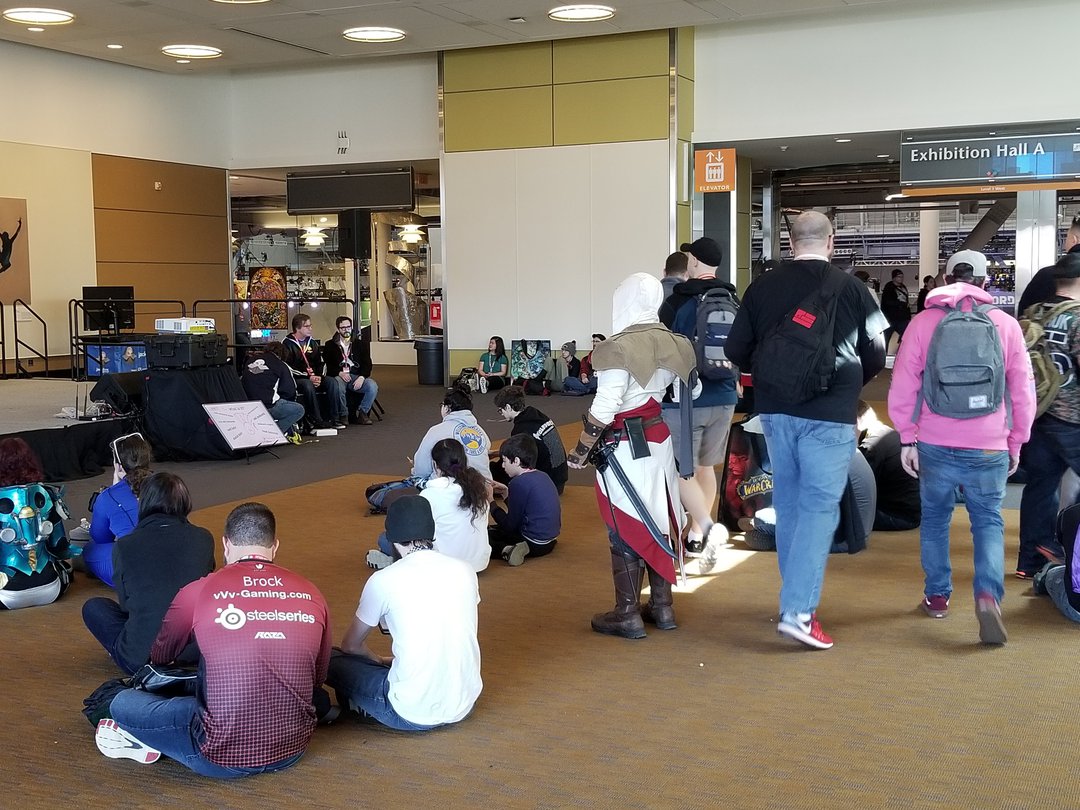 PAX always brings with it the best, the new, the weird, and the downright unpredictable. It's a chance for us here at Sprites and Dice to get back to basics. With that in mind, Adam and Eric were able to experience PAX East 2018 from an all new, never before seen angle: Thursday. What did they take away from their first of the now four day convention? Read on.

It's all the flash and lights you’ve come to expect from PAX but now with 150% more chill! Thursday PAX is a phenomenon in itself. It’s relaxed, without the crushing crowds of the weekend. A perfect opportunity to spend some quality time with big highlights and smaller indies alike.

Detroit: Become Human was one of the first things I tried over at the Sony booth. Booth is an understatement by the way; they had over 30 working demo stations for this game. You get a chance to play as Connor, a negotiation android sent in to talk down another of his kind that has taken a little girl hostage. What began with strong characters and fluid animations we’ve come to expect from the studio that game us games like Heavy Rain (another title I quite enjoyed) quickly turned into an intense moral dilemma with multiple lives on the line. I was impressed that, even after 100 percenting my challenge, I was told there were roughly 8 total endings to the scene. Maybe I'll squeeze in another round tomorrow just to see another one. If you weren’t already following this game, do yourself a favor and check out a trailer. This game is definitely one of the big ones to watch out for.

My highlights of the day were my interviews. Above puts you in a world ala the Ghibli film Porco Rosso, flying your red byplane over a series of islands while you quest and explore through larger story. Release isn't slated until 2019, but I've got my eye on this one. Expect more details down the road as I hear more about it. Legends of Aria is a game that can best be described as Ultima Online meets Neverwinter Nights. I haven't seen anyone make game like this in a long time, and they are releasing the code with the game itself later this year so the community can mod and tweak its servers any which way it likes! Expect a more full review after I've had a chance to play around in the world. Finally, Devolver Digital has something new coming our way with The Swords of Ditto. Think Zelda, a bit like Link to the Past, but given a light roguelike treatment and proceedurally generated dungeons. This is another one I'd like to do a more full review of when the time comes. For now, expect it on PS4.

I'd also like to give a couple of honorary shout outs to some other interesting games out there in the works. Good Shepherd brought six titles with it this year, among them the cyberpunk roguelike Black Future '88 and Semblance, a platformer that lets you break the rules by bending the level itself. Heaven's Vault was a unique find with a strong female main character that looks like it's doing a lot of things right; plus if you like games soley about exploration and discovery, you'll find this archeological game thoroughly enthralling. Look for these in later 2018 and 2019. 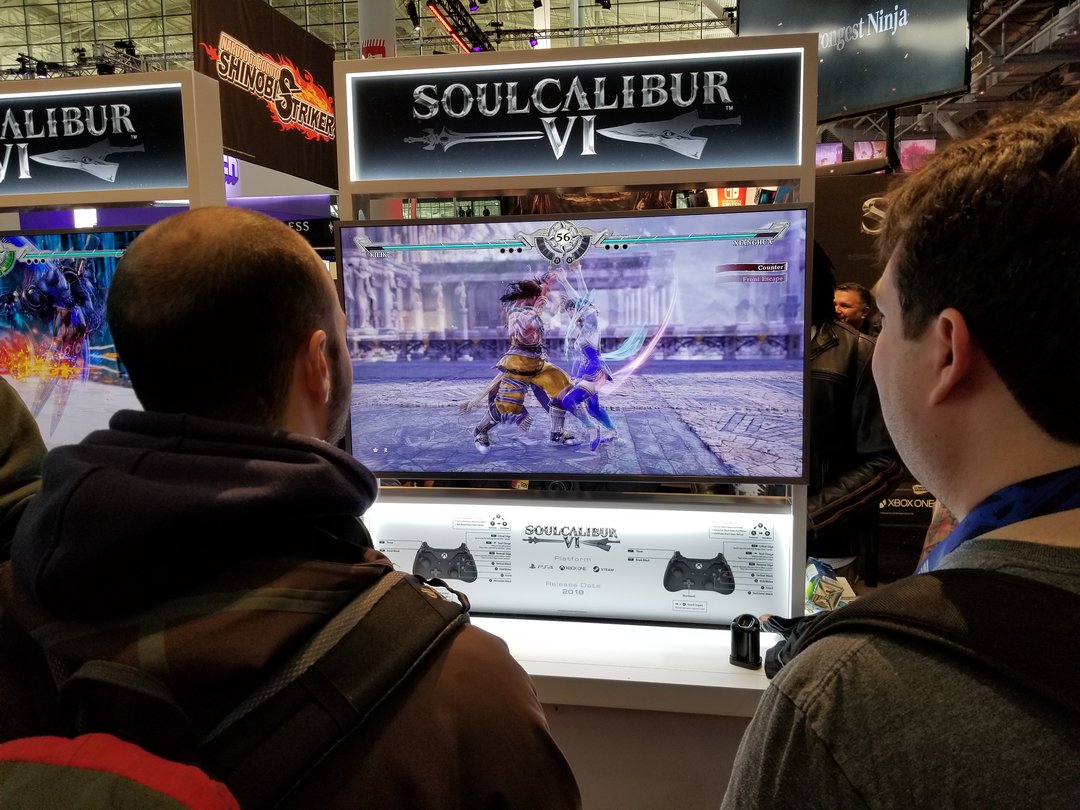 So much shiny everywhere.

Day one of PAX East 2018 was unusual but excellent time. This is the first year that they’ve had the convention open on Thursday instead of Friday, and the difference was striking. There were far fewer people than I’m used to seeing at this event, even fewer than the usual Sunday crowds. As a result, the overall energy of the day was fairly laid-back, much less frantic than usual.

Adam had our media pass today, so he got to go on the show floor an hour early while I was still back with the crowd. When the floor opened, the two major booths that I hit before the lines got too long were Ashes of Creation and Dauntless. The first is an MMORPG that enjoyed a hugely successful kickstarter campaign and already has a lot of positive press. I played a ten minute PvP encounter and found that it plays a lot like Final Fantasy XIV.

Dauntless, on the other hand, is much closer to Monster Hunter, though with a focus on cooperative play. I joined a team of four as we took down the Shrike, an owl-like monster the size of an elephant. Dauntless also has a hint of Souls-style gameplay to it, involving a lot of dodging and picking your attacks carefully. There are definite moments of “I should not have done that,” where you can’t do anything except wait to get hit mid-attack. I scored a beta key for this one, so stay tuned for a full review.

However, the highlight of the day, without a doubt, was seeing Markiplier live. He’s a big inspiration for me, not just because he’s a great performer or because he’s become such a huge success through gaming, but because he comes off as such a warm and genuinely good person. The hour-long panel was just Mark answering questions from the crowd, and the whole event walked a line between hilarious and heartwarming.

Also, that panel got the hashtag #UsePenis trending on Twitter, so that happened.

I did something that I meant to do last year and bought a Board Game Booster Box, which contains a random assortment of board games - check our Facebook for the unboxing video!

The rest of the day was spent walking around and seeing what caught my eye. The Indie Megabooth is great this year (then again it’s great every year), the tabletop area is as enjoyable as ever, and there are an unusual number of 80s-tastic games on display both in the video game and tabletop sections of the show floor - which is a highlight for me, anyway.

It is, however, a bad year to be a person who’s never played PUBG.

Adam and I called it an early night, because we have a lot more PAX to go and we need to rest. Especially now that there’s a fourth day, we are keeping in mind that PAX East is a marathon and not a sprint.

With that said, I now have to do a write-up of Wordoboros, so that should be up tonight or early tomorrow.