A New Way To Celebrate 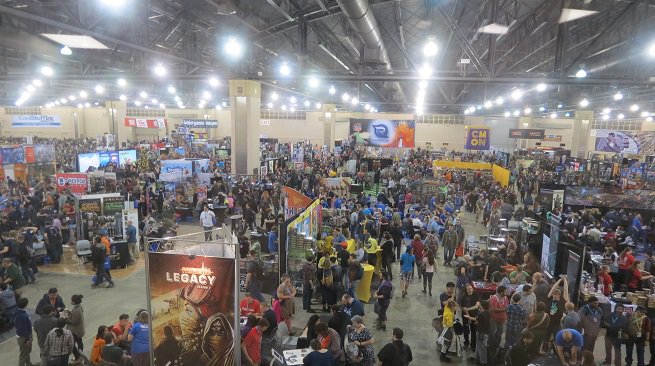 That is true on several accounts. It is true for the many attendees that eagerly go to every PAX event they can, whether it is East or West or South. It is true for the attendees here that have been to board game conventions, and weren't expecting the layout Penny Arcade likes, or how much PAX events love their teams of enforcers to keep a strong atmosphere. It's also true, of course, because this is the very first PAX Unplugged, that there is no precedent to compare it to.

We would like to say that the convention seems to be quite the success so far. According to the other things convention goers are saying, we think we are in good company.

What We've Seen So Far

PAX Unplugged is laid out in a fashion you would expect from a Penny Arcade event: there is a large expo hall room that has a treasure trove of new games and promising exhibitors inside as the centerpiece. There are events that occur on various stages, from the infamous Omegathon to panels that cover designing games yourself. There is a freeplay area with plenty of seats, an area to sign up for RPG events...there is an AFK room for those that need to cool off, a diversity lounge, a room for kickstarter and early alpha games, and of course, the cookie brigade marching about to raise money for charity.

The major difference of course was the fact that this all revolves around games that do not need screens and lights to have fun. In fact, it doesn't quite hit you how much a difference it makes to take away so much digital media. The expo hall floor has been a dull roar of sound as long as it has been open, but the sounds were all of people talking and calling out to each other, with the occasional burst of laughter or loud rolling of dice nearby. There's no loud thumping music or digital shouts of battle trying to vie for your attention. Eric probably put it best when he told me it sounds like constant running water, rather than a massive battle between multiple nightclubs. 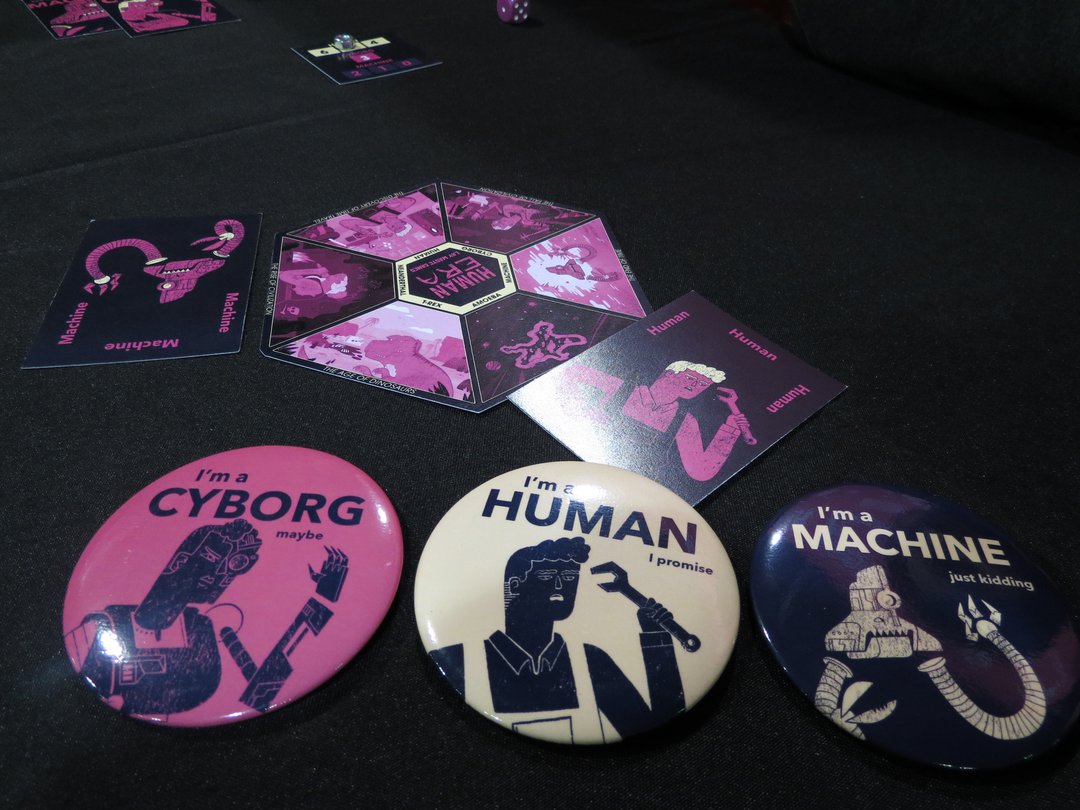 The new social game by Lay Waste Games, Human Era, was an absolute blast to play.

It has been fantastic for us how much more time seems to go into playing games rather than waiting on lines here. Yes, we still feel like we haven't seen everything, but that's because we get a chance to sit down with developers and play games with them directly. The show floor has industry giants like CMON showing off demos of the much awaited Rising Sun right next to new very promising voices and games like Dice Throne. The freeplay area is massive, and as we write this on Saturday, almost all the tables are packed with people unboxing their new purchases and trying them out with others. There's a tabletop tournament section being run in part by Cascade games, and it is equal parts new games on the scene like Lightseekers and L5R alongside classics like Magic: The Gathering. There's an entire set of rooms dedicated to playing RPGs, and the line wraps around the corner for that with excitement.

As this is the first dedicated board game convention for myself and Eric, this change of pace is taking some getting used to.

The first day of PAX Unplugged might just have been the best day I ever had at a convention. For one thing, it was my first time going as official press, with all the associated perks that brings. That was nice, and of course I played great games and met interesting people, but really what made it so good was just the overall atmosphere of the convention.

PAX East is bright, loud, and in-your-face. Everything is fighting for your attention all at once, trying to be shinier and noisier than the thing next to it. It’s crowded, the lines take ages, and the panels fill up instantly. PAX Unplugged is an overall calmer, more laid-back experience. 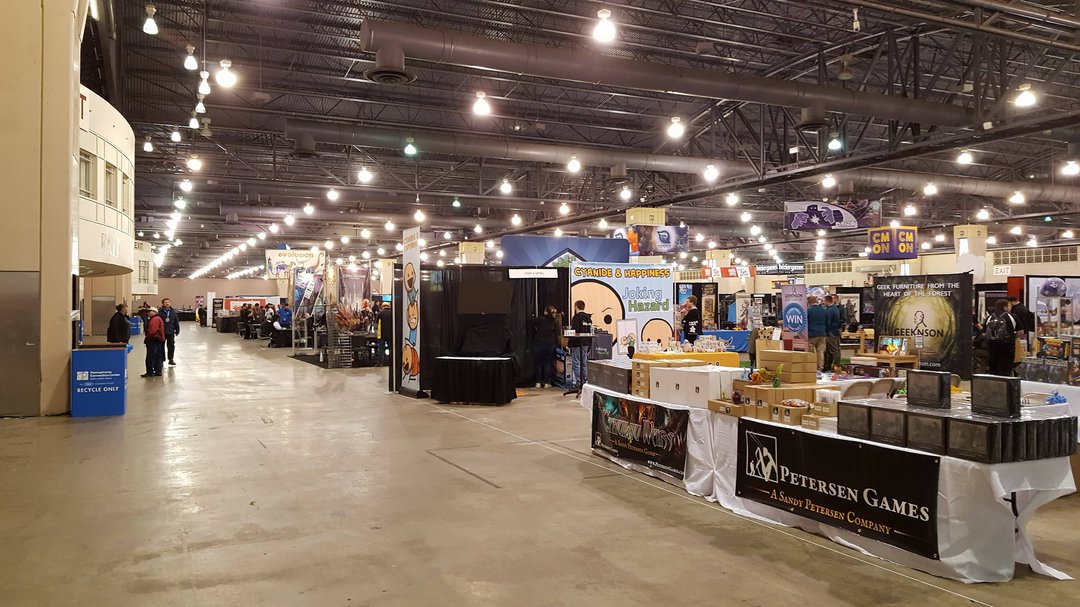 There's something beautiful about an empty convention show floor.

Being press, we got to go on the show floor an hour early on Friday to get to our must-see vendors, but it almost wasn’t necessary. You don’t have to fight to get where you’re going, and if the game you wanted to see is already being played, you just come back in half an hour and demo it then. The one exception to that was Paizo; I’m glad that I demoed Starfinder early on Friday, because their demo slots filled up very quickly on both Friday and Saturday. Naturally, Saturday has been much more hectic than Friday. This has felt a bit more like a typical PAX: bigger crowds, cosplayers, longer lines, and more noise. It’s still nowhere near the stifling atmosphere of a PAX East show - I have elbow room here! - but nonetheless it was a good day to do a bit less wandering and get some of the specific experiences I wanted.

Aside from hitting a couple of panels, I fulfilled a promise to Wyatt and entered a Pokemon TCG tournament. That worked out quite well for me, actually, and as a noob still asking rules questions I managed to pull a 2-1 win record. So many of the events have been very accessable all convention, and it's a great feeling. 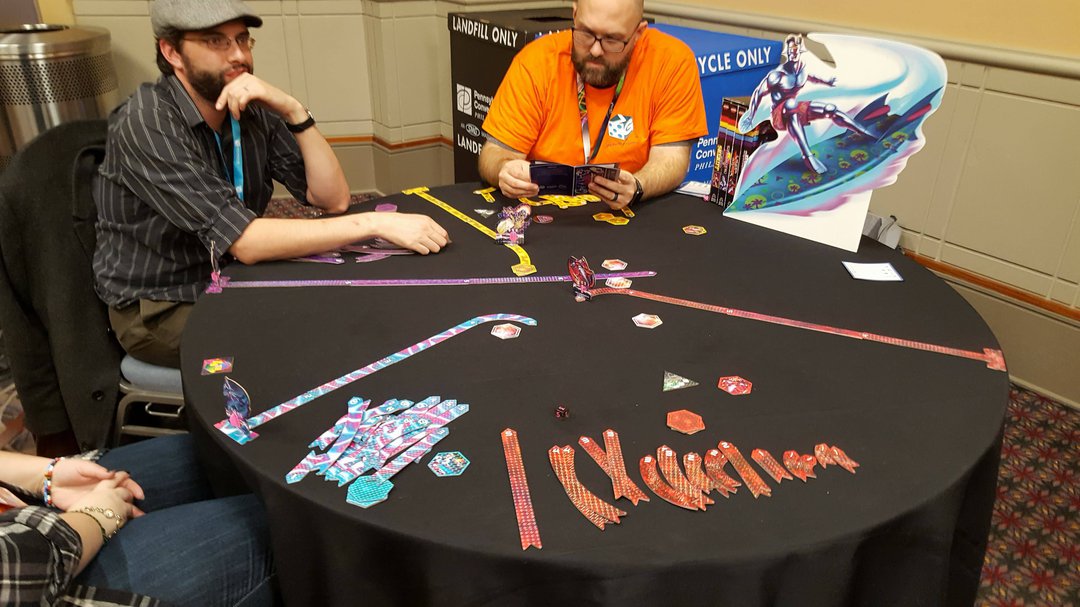 My favorite game so far of the convention has been Lazer Riderz by Greater Than Games. It is very, very fun and very, very 80's. I can't wait to bring it back to our board game bar nights and put it on a table to watch the reactons. Another fun purchase was Dice Throne, which is essentially taking Yahtzee and making turning it into brutal combat; it works, trust me.

If I had to sum it up in one sentence, I’d say that PAX Unplugged is like smooth jazz as opposed to PAX East’s blaring EDM. I don’t know whether it’s just the nature of board games as a physical rather than an electronic medium, or if it’s because they tend to attract a different sort of person, but the feeling here isn’t quite like anything I’ve experienced at other conventions.

Eric's already covered the essential feel of the whole event, so it's time to list off some of the awesome experiences to have here. One of the immediate things that is a constant is how much easier it is to actually play games, rather than wait on lines. It might be partially because this is the very first Unplugged and so it is less crowded, but I have had more time to actually walk the aisles and play brand new things than I have in most other events past.

I'm loving how booths are all intermixed. I've discovered companies and new games by the dozen that I never heard of before this. Fowers Games had a brand new game called Bargain Quest that I cant wait to play, where you are the shopkeepers supplying the adventuring heroes. I know at least six people who picked up Dice Throne, a Kickstarter that is releasing publicly early next year, but people swarmed their booth because of the art. I got to play Hand of Fate: Ordeals, which was fantastic. I love the video game series very much, so seeing it converted into a board game was inspiring. There's even a brand new game called Fog of Love, which has their booth covered in mood lighting and heart-shaped balloons.

Some of the industry heavies are here, and the big new releases like Raiders Of The North Sea or Massive Darkness are here to buy as well, but I always love going to conventions to see all that is new and hard to find from just behind your home computer screen. I love how this board game convention has some truly fun and bizarre booths, from getting adventuring journals or metal coins for games, to even getting sound suites to blast while playing Dungeons and Dragons at home. 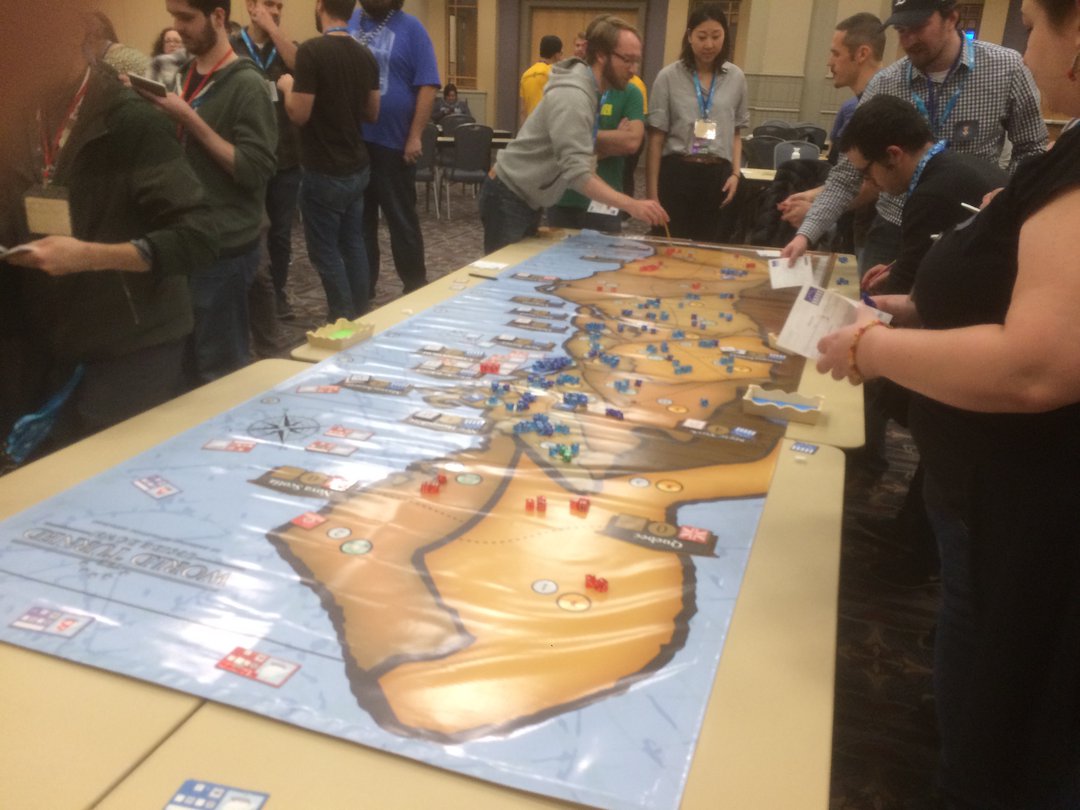 About five years in, things were looking pretty rough for a while... Isn't that the biggest Risk style board you've ever seen?

My favorite part of this convention however has to be the ability to play in a megagame. Ironmark games was the company tasked to organize these massive 60+ person RPG events, and since it was after the expo hall hours, I got to actually play. The specific game we played was The World Turned Upside Down, which was playing through the American Revolution. Myself and four friends got to be the delegation from Virginia, and trust me, you have no idea how fast four hours goes by playing in one of these. Absolutely one of the most intense gaming experiences of my life, and I loved it. Expect a few articles about this one.

As we move into the end of the convention, it's time to zero in on the must-have purchases and the corners of the hall I haven't seen yet. However, by the end of Saturday, I absolutely feel as though I've gotten my money's worth for a three day pass, and I can't wait to write about all the games I've had a chance to play.

A Convention For The Curious And The Veterans

The long and short of it is, PAX Unplugged is one heck of a good time. Saturday so far has been a bit exhausting, but that's partly because we're running 18 hour days awake either at the convention or playing games in Philadelphia. Even though this is in some ways a smaller convention, there is absolutely no lack of things to do. This event is fantastic, and while we've heard about some small rough edges, that's to be expected for running for the very first year.

We already know we are coming back for next year. It feels wonderful to have a board game event in the north east that feels so friendly, accessible, and fun.