A Preview of Tooth and Tail 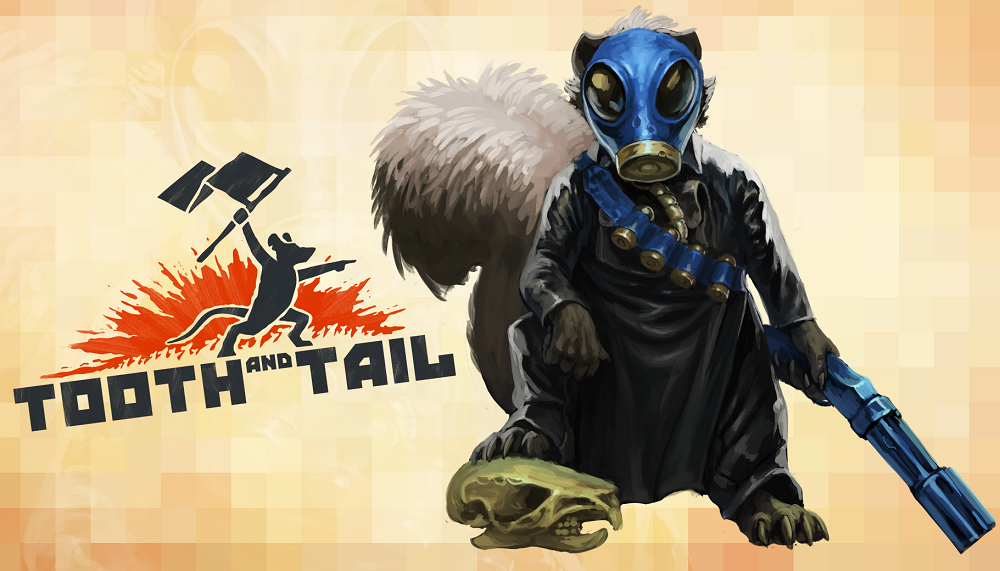 “I read through recent history for inspiration on our design, and something stood out to me,” Adam, a game designer onTooth and Tail, was talking to be excitedly after I had demoed the game at PAX East. “It’s about food: revolutions happen because of food. The Russian Revolution, the French Revolution… There wasn’t enough food to feed the masses, and that’s what set everything off.”

Tooth and Tail is a game with good gameplay that’s elevated because of its art design choices and charm. Created by Pocketwatch Games, the developers behind indie hit Monaco, Tooth and Tail is trying to carve down the RTS genre into fast, delicious, satisfying bites. Games can are over in ten minutes or less, as the battlefield forces you push into more dangerous territory looking for food. 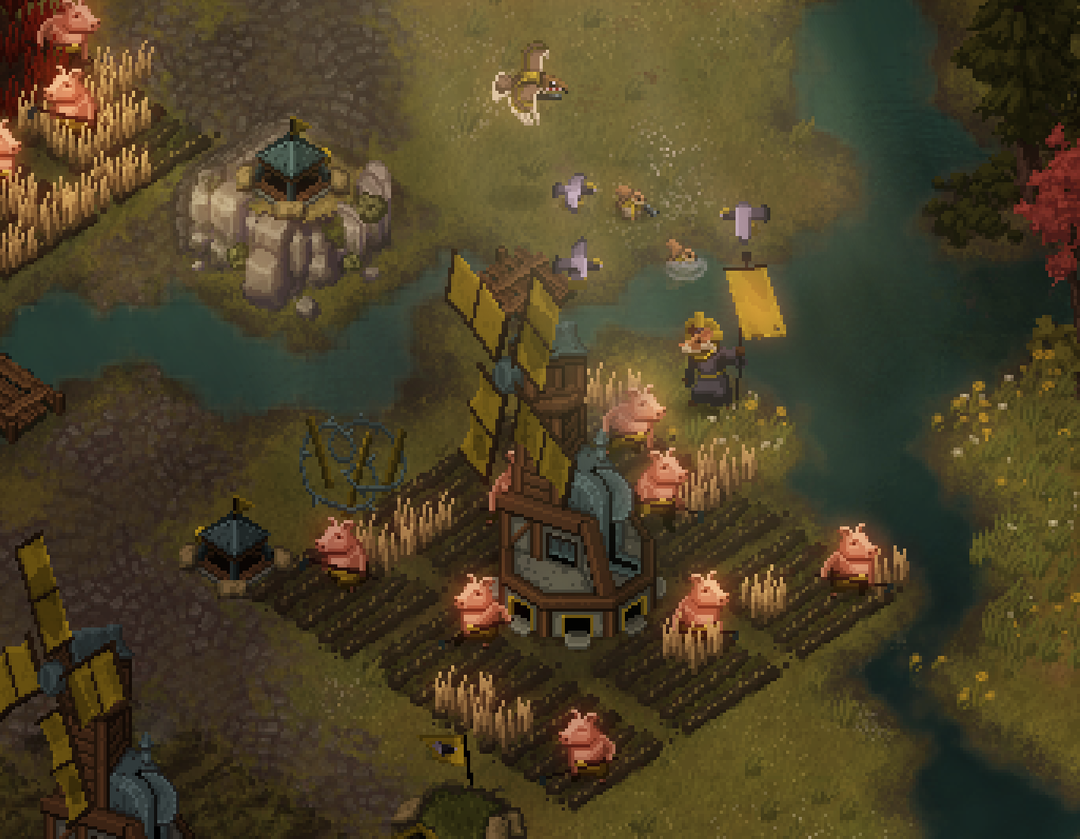 The art style is bleak and pixelated, but also charming and clear enough to read exactly what is going on. Also, pigs farm your food, which is creepy.

“Animals are interesting because they are so simple. They want only a few things: food, shelter, and procreation. As a kid, I always thought about what the squirrels on the power lines were chittering. Were they making sure they had their own territory for food? What would a culture based around this look like?” Adam is enthused about his game, and there’s obviously a good reason for it: after three days at the convention, the booth was packed with people not only playing the game, but also watching, analyzing. Figuring out strategies so they can try to beat their friends next.

The game is made incredibly easy to understand – and playable with a controller - through the use of banners. You play as the leader of your side, made obvious by the fact that they run through the map with a large flag, waving it as they shout orders to plant fields, set up animal dens, or rally your army to their side. You call your army to you, and depending on where they were resting previously, will soon be to your side, fighting foes automatically as they arrive.

It seems almost too simple, but actually very engaging in action. I was able to play the game myself, as well as watch several matches, and I enjoyed how quickly battle could be joined. Within a few seconds of starting, you could run your flag right into the opposing base; it’s almost startling how small the maps are in comparison to other RTS games. Of course, your flag bearer doesn’t truly attack, besides calling your armies to that spot. Any animal dens you have automatically generate units of that particular type up to their maximum, as long as you have enough food. Wave your flag, and those units will surge towards you.

This leads to a situation where you can easily traverse the map immediately, but are still required to prepare your armies ahead of time. You can try to anticipate where your enemy might set up at a new gristmill for food, and have your army there in moments. At the same time, you have to make sure your food stocks stay high, balancing the amount of animal dens you have with food production. The more dens, the more units, but the more food eaten.

In the game I played, I had a great lead at the start, stopping the enemy from taking a gristmill by outproducing units and constantly harassing them. Unfortunately, I became so enthusiastic about keeping them from this one mill and harassing their main base that I didn’t see them set up in a gristmill further back in the level. At the same time, I forgot about a gristmill in the back of my property, and so wasn’t prepared when my first set of farms became exhausted. This left me in a terrible spot: I didn’t make enough food to restore my army, and I wasn’t making enough to also set up my new farms. 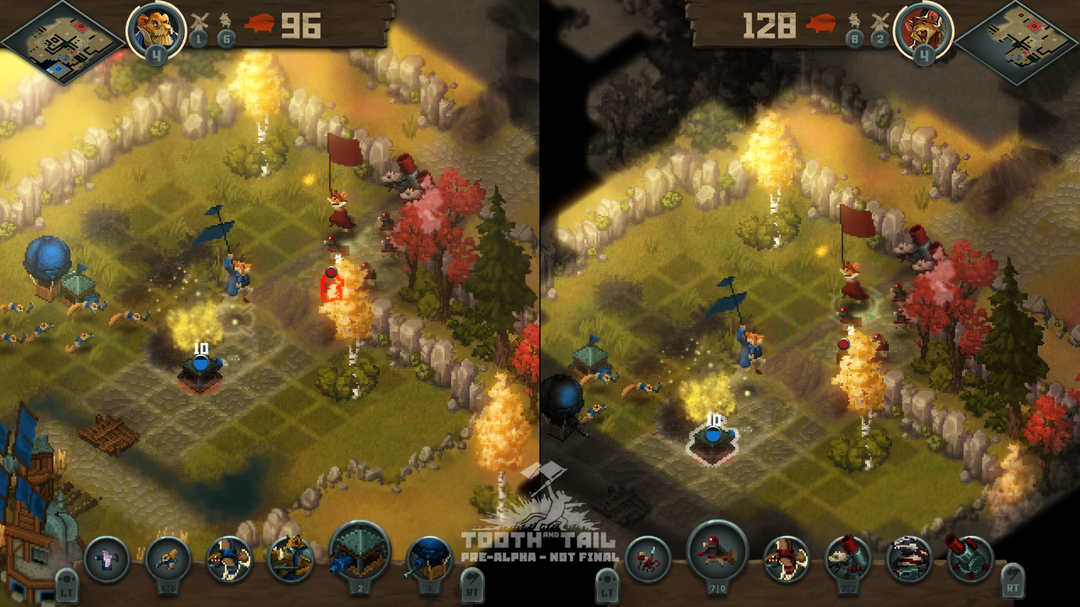 Yes, those are ferrets with mortars on the right. Yes, those bastards deal a lot of damage.

Despite my humiliating loss in front of a dozen or so onlookers, I’ll happily say Tooth and Tail is a good game. I immediately wanted to jump in and play again; I wanted to figure out how to improve, and how to properly drive my foes before me. I adored having ferret mortar-men, and hawk ‘aircraft’, and combat felt frenetic but fun. There was no need for micro-management, just the need to know when and where to strike. I would have kept playing, if not for the line behind me.

The ability to be a revolutionary war leader and crush my friends in ten minutes or less? Sign me up. As of right now, there is no set release date, but this is certainly a game you should keep an eye out for in the future.