Bit Brigade:
The Most Fun You Can Have Watching Someone Else Play Video Games

A Metal Band With A Unique Twist 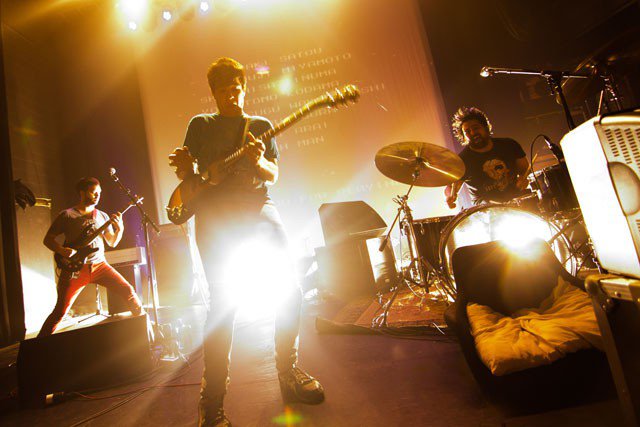 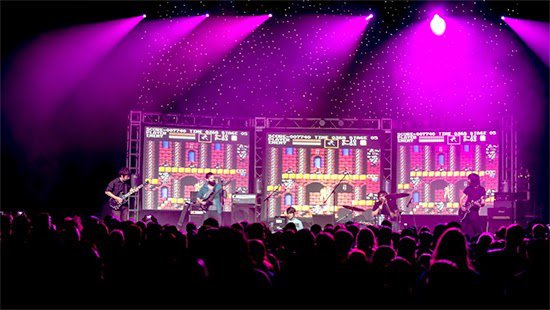 With PAX East less that a month away (squee!) and the musician lineups officially announced, this is a good moment to remember PAX East 2014, and one of my favorite moments that discovered. Bit Brigade is a five-piece rock outfit based in Athens, Georgia. The band features Bryant Williamson and Jace Bartet on guitar, Luke Fields on bass, Mike Albanese on drums, and Noah McCarthy on... NES?

Yes. Bit Brigade is a band that combines music and video games into a performance art all their own. As Noah blasts at top speed through the game of the night, the other band members provide their own blood-pumping interpretations of every song and musical cue in near-perfect synchronization. I saw Bit Brigade perform at PAX East 2014, where their chosen game was the original Legend of Zelda. From the opening “press start” screen to the final image of the Triforce of Power among Ganon's ashes—all told, about fouty minutes, an impressively fast run—they kept the audience rocking.

If you are familiar with the original Legend of Zelda game, you know that there are four songs total in it: the overworld theme, the dungeon theme, the final dungeon theme, and the credits (there's also the game over music, but that never came up). These same songs repeat over and over as the player goes from the overworld to each dungeon and back to the overworld again. However, those who anticipated a repetitive and boring performance were quickly reassured as Bit Brigade drew on songs from the entire Zelda franchise to keep things going. For myself, at least, part of the fun was seeing how many of the tunes I could recognize—most of them, as it turned out. My favorite Zelda tune was and will always be the iconic overworld theme, but other notable selections included the Dark World theme from Link to the Past, the overworld theme from the franchise's dark horse Legend of Zelda II, and Ganon's Tower from Ocarina of Time.

As good as the music is, Noah's playing keeps pace. As fans of speed running and professional gaming know, there is a certain satisfaction in seeing a game played well. A classic game like Zelda, one of the old standbys of Nintendo and modern gaming as a whole, has a powerful nostalgia factor as well. Being very familiar with the game myself, I found myself watching and analyzing McCarthy's playing:

Where are you going? There's a 30-rupee secret room there!

Not going for level 5? Oh, he wants the White Sword first.

Last extra heart/potion room, honestly at this point I would go for the potion. Yup, good call.

...And so on. Many of you already know what it's like to watch someone be way too good at a game: a combination of analysis, awe, and learning.

These two elements of Bit Brigade's performances—the music and the gaming are impressive on their own, but they come together to create a new kind of experience; the real magic is in their teamwork. A performance of this sort could easily degenerate into inappropriate songs and mistimed effects, but Bit Brigade has learned to work together. Each time the music faded out as Noah waited for the right moment to collect the latest piece of the Triforce, it felt like a dramatic pause. When he picked it up and the musicians rocked out the fanfare, it never failed to get a huge cheer from the audience.

Bands are, by their very nature, comprised of people who need to work together or fail. Although video games are far from a traditional instrument in such an ensemble, they mesh seamlessly with the whole. Bit Brigade does this in a bit more of a nontraditional way, and because of it, highlights the need for seamless cooperation.

However, as eloquent, and intelligent, and dashingly handsome as I like to believe I am, a performance is something that must be seen to be fully appreciated. Since I can't get all of you tickets to their next performance, please enjoy this video of their performance of Mega Man 2 at MAGfest X. Some bands are better in show than they are on CD, and because of their 'performance art' by blowing through a game in one sitting, it's defniitely something you want to try to experience live...if not just for the band, but watching the crowd start to cheer more, and more, and more, until the final boss lays defeated.

Those of you who are going to PAX East this year, whatever else you do, Bit Brigade is one thing you won't want to miss.