Brigitte Brought Me Back

Brigitte is Overwatch’s 27th hero and the sixth released after the game came out almost two years ago. She’s the latest in Blizzard’s efforts to regularly pump out new heroes, maps, and game modes, like the recently added capture the flag. Despite these efforts, the core of Overwatch has remained largely the same. It’s a very strong core, but like any other game, it needs new things to feel fresh and engaging.

Whenever I come back to Overwatch, fresh and engaging is what it remains for me, but I know not everyone would agree. This isn’t to say that new additions haven’t been successful; I had difficulties getting playtime with Brigitte because she was such a popular hero. But there’s more than just the appeal of a new face in the roster. She has a lot to like.

She’s a middling character in a good way. She doesn’t have too many abilities to learn, but a skilled player can combine them well enough that she feels complex in the right hands. She isn’t tough to control like Genji, a hero with very high mobility, but she doesn’t feel lumbering like Reinhardt either. Her offense, defense and support capabilities make her feel competent filling in for any area, instead of slightly falling behind the mark in several while excelling in one. In a game that felt sparse with jack-of-all-trades heroes, she’s a very welcome addition that can only help keep players like me around. 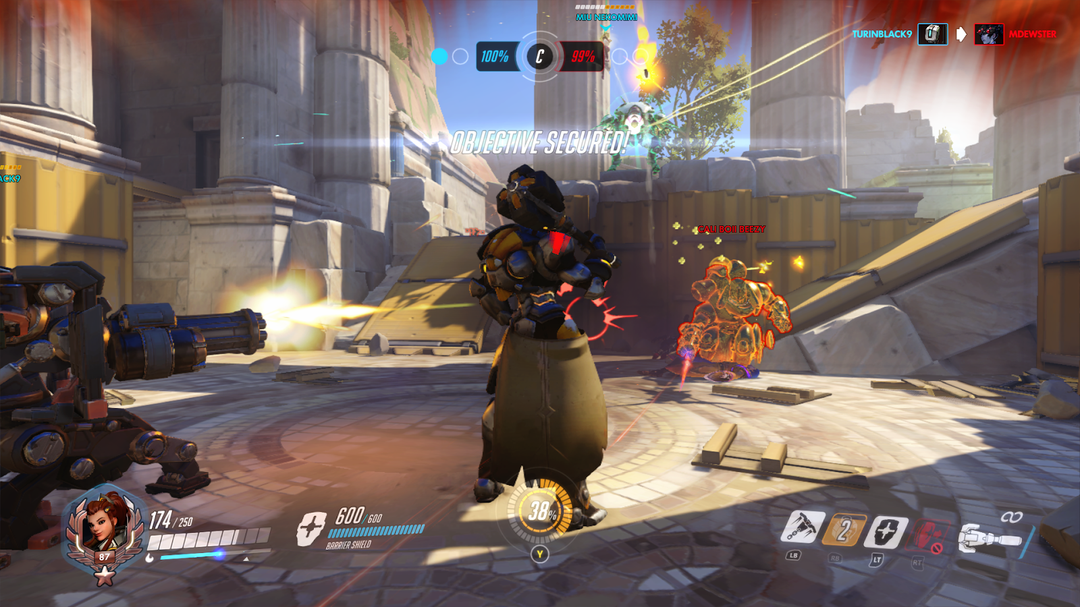 I expect Brigitte to lead me to many a victory (once I get better at her).

Matches aren’t hard to find if that’s any indication of the player base, and they’re clearly willing to experiment with new additions like Brigitte. Still, two years later and I mostly find myself pushing a cart or defending a point, and I can see how players could get sick of that.

And yet, these modes haven’t worn out their welcome in my home. I can partially attribute that to learning a new map or hero every once in a while, but the loop of new skins, emotes and highlight intros has definitely helped keep the staleness at bay. A new set of these unlockables in the form of Brigitte helps keep me around. 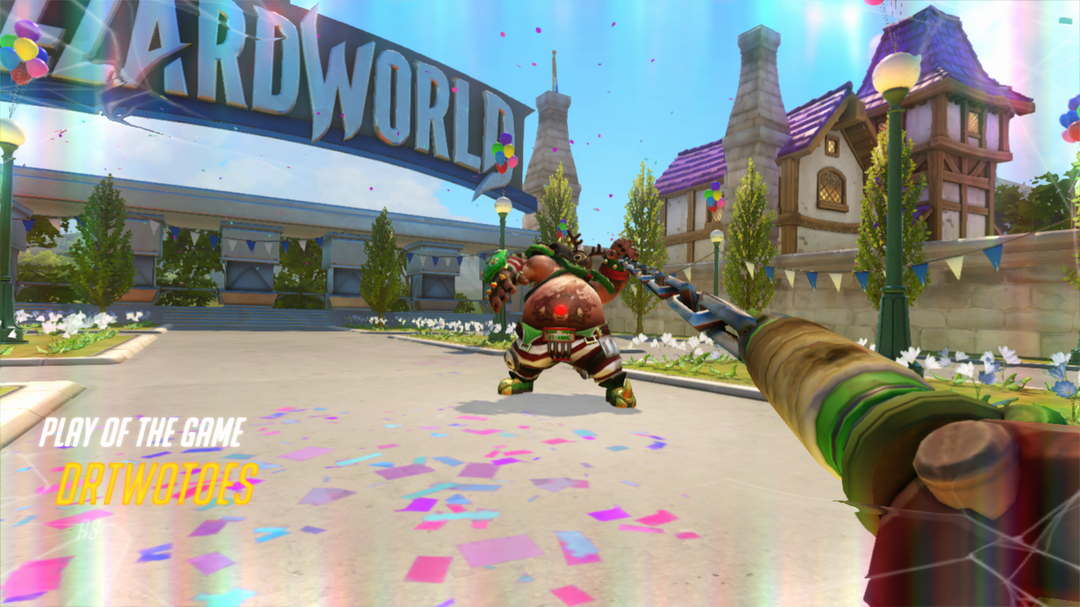 Oh hey Roadhog, I didn’t see you there. What’s that? I’m only one arcade win away from unlocking Hanzo’s kabuki skin? Well don’t mind if I do…

Come For The Shooting, Stay For The Loot(ing)

Overwatch has got me hooked, I’ll admit it. It’s not so bad that I can’t go without playing for a few days, maybe even weeks (as other video games require me to), but I can’t deny that once I see that XP meter inch closer to the next level I usually can’t stop playing until I’ve earned a loot box.

This kind of talk may raise a few red flags, I get it. Maybe I’m being manipulated to find some kind of perverted enjoyment in a game that I wouldn’t otherwise enjoy. But underneath all that, I really do enjoy playing Overwatch, and as controversial as its loot boxes might be, they’ve inspired me to learn a game I maybe wouldn’t have a long lasting interest in, to get good at it even. If the game itself wasn’t as amazing as it is, the grind for loot wouldn’t be enough to keep me around.

It also helps that loot boxes incentivize players to experiment with different game modes like low gravity and random heroes. Win three arcade games, win a prize (up to three per week)! In the meantime, you’re branching out and experiencing the game in a whole new way.

Even if the objectives are the same in these modes, fundamental changes like dealing with two enemy Bastions changes a great deal. Every time a new map or hero like Brigitte is added, these changes get amplified. With them comes a new way to flank, draw enemy fire, or pair up heroes to tackle challenges. They might not seem like big changes if you’ve only played a game or two, maybe watched a stream, but once you get enough experience they feel like night and day changes from a quick play game before the new stuff was released. I’m not going to try and explain how Brigitte changes the meta, which is a world of super intricate tactics like I gave simple examples of above. I simply don’t know enough about how Overwatch works on a deeper level to comprehend any of that stuff, but boy does Brigitte remind me that I want to learn. 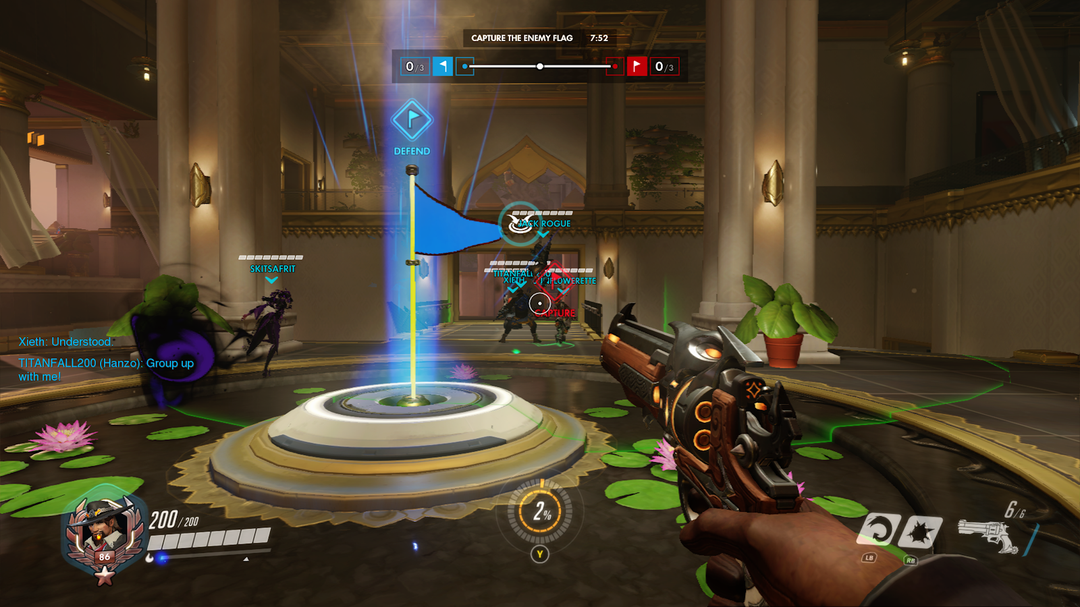 While I’m not the biggest fan of every new mode, I appreciate Blizzard’s efforts to keep things fresh.

Wanting To Get Good

As much as I would like to, I’m not going to claim to be amazing at Overwatch; compared to League players I may as well have never touched the game. I’ve also never tried my hand at competitive because I’ve heard that playing with randoms on anything ranked is a death sentence. What I’m going to claim however, is that I’m pretty good at Overwatch and with a proper team I believe I could hold my own.

I’ve gotten better than I ever could’ve imagined when I first started. It’s not natural skill, I had to put in some serious time across the board to feel as comfortable with most heroes as I do. Perhaps the greatest thing I could say about Overwatch is that it made me want to put that time in.

As I mentioned earlier, the gambling grind [for loot boxes] definitely played its part in keeping me around. But deep down, the gameplay of Overwatch is at the top of its class. Every hero feels balanced, Brigitte being no exception, and when they don’t it’s a quick fix. They all have their purpose and that purpose is a pleasure to perform. The objectives hold my focus more than most multiplayer shooters do. The maps make me consider different team compositions and positioning. Maybe I have an appreciation for the entire genre that I’m unaware of, but the fact that I regularly and joyously play 20 out of 27 heroes across every role, four of which were released post launch, speaks to something about this game in particular. It hits plenty of notes that I enjoy, and additions like Brigitte are always going to bring me back.