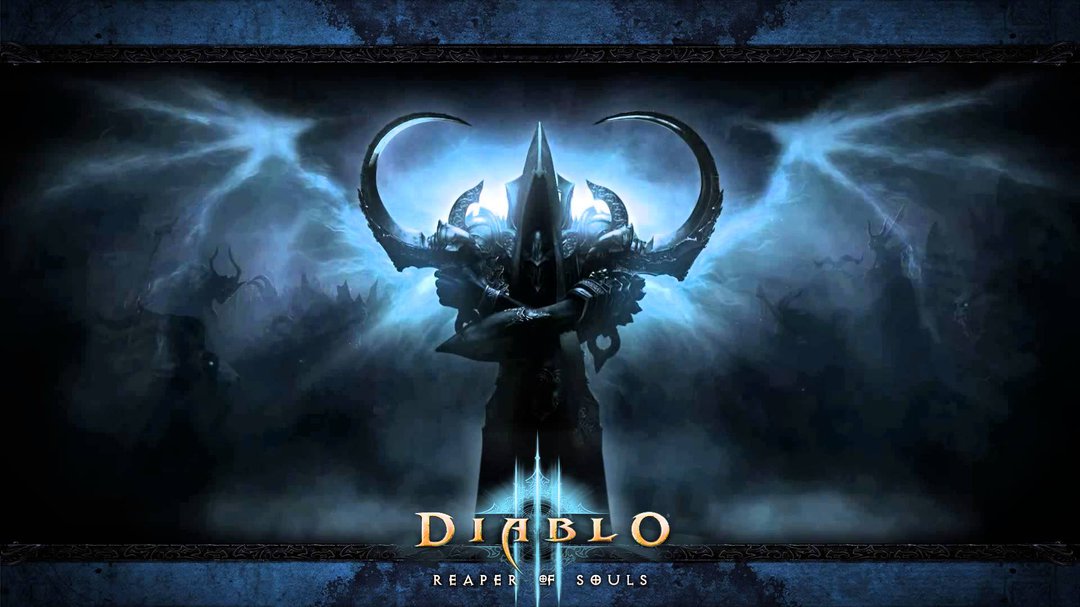 I picked up Diablo III and the Reaper of Souls expansion a while back. Although I played and enjoyed Diablo and Diablo II, work and life and other games became too distracting and I never quite got around to finishing this latest installment until now.

First and foremost, it's a fun game. There are things I really enjoy about Diablo III and some things that I don't like so much, but never let it be said that it's not good fun to sit down and slaughter a few thousand demons. Now, let's get into the 'why'.

Diablo III has a good variety of characters to choose from, though the only ones I've played personally are the barbarian and the demon hunter. The crusader is the new version of Diablo II's paladin, and the witch doctor appears to be filling the role of the necromancer with summons and debuffs. The wizard is your standard glass cannon caster, and the barbarian is a tough and tanky bruiser (with a really funny, though largely useless leap ability). The monk is interesting, to say the least: A lightly-armored close-quarters fighter with rapid attacks that also uses buffs and healing abilities. The demon hunter, who was my main, uses ranged attacks and takes advantage of traps and movement tricks to control the flow of combat. There's really a bit of something for everyone here.

The game-play builds on its predecessors' by introducing different types of skills and the ability to activate them directly with hotkeys instead of doing it all with right and left clicks. This allows for a lot more options in combat, and makes things like the demon hunter's dodge ability much more practical.

Some of the more general mechanics have been streamlined as well: Gold pickup is now automatic, so you don't need to worry about gathering a dozen different piles of gold before leaving a room. Scrolls of Identify and Scrolls of Town Portal no longer exist, and are now just abilities that all players can use for free.

What is perhaps my favorite change is the ability to freely switch your character's skills around to experiment with different builds and combinations. Unlike Diablo II, where once you chose a skill you were stuck with it forever, this allows players to fully explore their options without having to make a bunch of different copies of the same class to do so. The loot system is a great deal more convenient too, as the majority of enemy drops are suited to whichever class you're playing as. In multiplayer, each player will get his or her own drops, avoiding the need to race for the best items or squabble over who gets what. 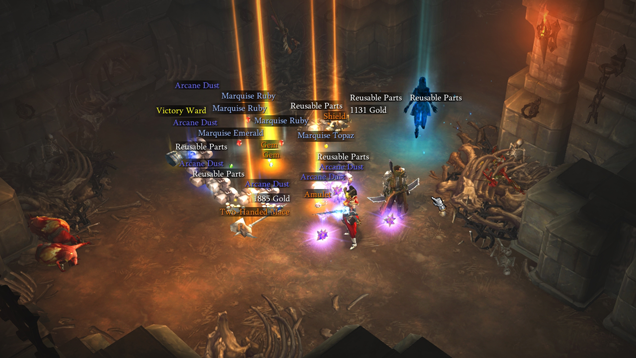 Disclaimer: I only wish I got drops this good.

The story in Diablo III has certainly escalated since the last game. It really does feel like the culmination of a trilogy, with the player defeating and sealing the last of the Great Evils and finally triumphing in a climactic battle against Diablo. The bastard never quite quits, now taking the power of the other demons to become the Prime Evil. But, in the end, you finally slay the beast and save Creation.

After that, the expansion really feels more like a bonus mission at the end of it all. You have to defeat a rogue angel named Malthael and stop his plans to permanently win the Eternal Conflict. He wants to do this by sealing away all of the demons and killing all of the humans (the first part's okay; the second, not so much).

Still, that type of escalation is a double-edged sword. Raising the stakes in this manner sometimes tends to invalidate what came before it, and unfortunately, Diablo III's story is handled very clumsily. In a nutshell, angels and demons have been locked in an eternal stalemate since the beginning of time; but, it now turns out that humans are actually angel-demon hybrids called Nephalem, and are the most powerful things in Creation. It makes the previous two games - and the whole concept of the Eternal Conflict - feel a bit silly when all it takes is your one Nephalem to wipe out every army in Heaven and Hell. 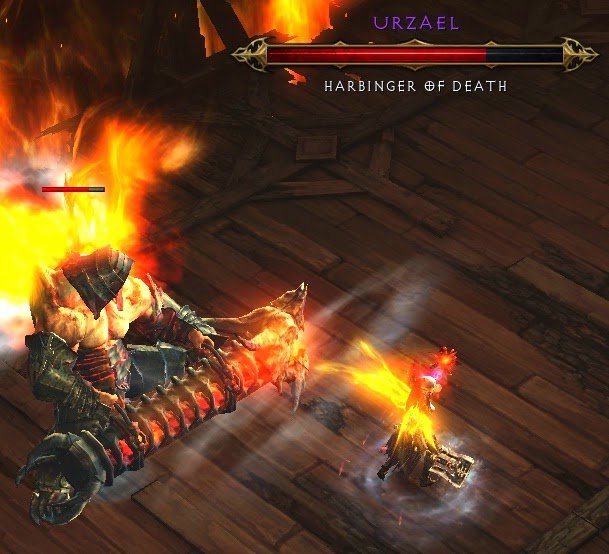 Another thing: If Malthael's lieutenant is tougher than Diablo channeling all 7 Great Evils,why is there an Eternal Conflict in the first place?

Perhaps as a testament to just how overpowered Nephalem are, the campaign mode is also very easy, and the hardest difficulties are locked until much too late. Playing through on Master difficulty, which is the highest available until a character reaches level 60, I died exactly twice: Once early on because I didn't know what I was doing yet, and once to the end boss of the expansion.

As a side note, my character is still only level 57, so even after beating the entire game and expansion I would still need to grind out three more levels to get a better challenge.

My final and biggest gripe with Diablo III is tied in to my favorite thing about it: Skills. While I love the fact that we're now able to freely change and respec our characters, a great deal of the customization has actually been taken out of the game. Character stats are now automatically increased upon leveling, rather than allowing the player to tweak them for their own ideal character. Even worse than that is the fact that there are no more skill trees; rather, each character has a bunch of different pre-set skills, and each of those skills has various runes that can be added to slightly change how they work.

There's no focusing on certain skills or building toward a particular idea, they just level with the character with no player input at all. It doesn't even feel like making a character anymore; it's more like you're handed a box of pre-made parts to stick together and told to go have a good time.

Overall, I would have to say that Diablo III feels more casual than its predecessors, for better or worse. The streamlined mechanics, improved options in combat, and ability to freely redistribute skills are certainly convenient and feel great, but the fact that it essentially builds your character for you seriously hurts the RPG element of this MMORPG. The enemies are awesome, but the overall story feels kind of like a bad fanfic, and the series as a whole retroactively suffers a bit from that.

Then again, maybe playing a Diablo game for the plot was my own mistake.

Still, at the end of the day, there is one major question that should be asked about any game: Is it fun? The answer here, problems and all, is still yes. Mowing down armies of demons (and angels) is as entertaining as ever, and it's a great game to enjoy with some friends. 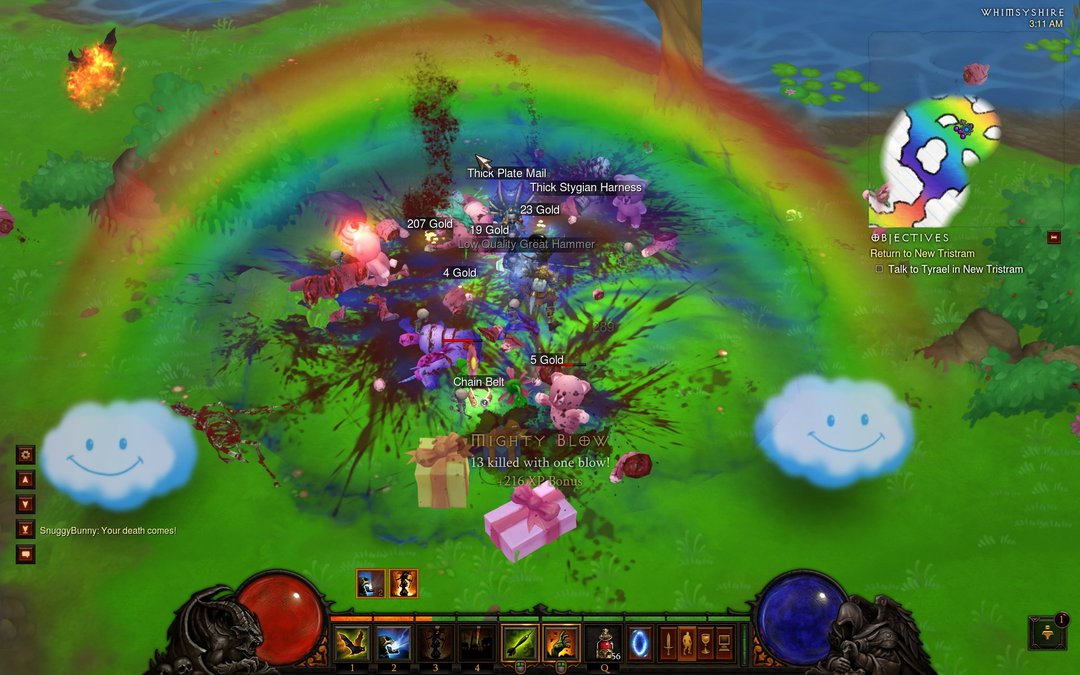 Once upon a time, in the magical land of Whimsyshire, EVERYONE DIED.

I'm glad I finally got around to finishing the series, ending one of Blizzard's long-running sagas on a point of high production values and great game-play, but with a little of the story tarnished in my mind. The company still knows how to make something that has enough polish to smother a small country, and that will continue to serve them well in future games. Will they revisit the Diablo universe after this last expansion? Only time will tell.

Our poor Patreon needs help repairing its legendary items after tangling with Malthael. Won't you spare a few gold for the server that saved Creation?