Too Much For Just Two People 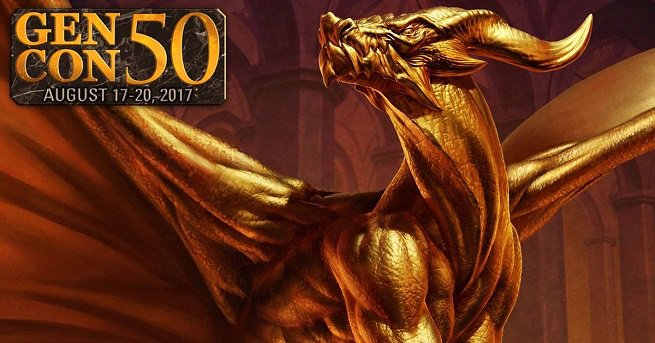 It's hard to believe that GenCon has been going on for fifty years, but here it is, and bigger than ever. While not always as flashy or as loud as the video game conventions, there is no denying its popularity and growing esteem. With over 500 board games being demonstrated and sold in the vendor hall, its no wonder why Indianapolis sells out of most of their hotels, and bars open their doors wide to let the gamers come relax after the expo hall closes.

We were fortunate enough to have gotten two press passes this year, and our contributors Dana and Nate are there, collecting news and games to bring back to the rest of us. From what I've heard, one day was already almost an overload.

The big standout game for me on Thursday was Fate of the Elder Gods by Greater Than Games. It was a lovely excursion into the depraved nihilistic depths of the cults that worship the Sleeping Gods. Cool aesthetics, solid mechanics, very interactive. Also i won, because I'm great. Unearth was really pretty and has a strong gambling mechanic that I enjoyed. I got to have a lovely sit down chat with the designers. Good times. I won that too, natch. One more highlight was Gothic Dark: I'm a big fan of deck builders and this game scratched a neglected itch with it's mixture of dark horror aesthetics and tight co-op play. It comes from the makers of Shadows of Brimstone, a personal favorite property. I won that too. 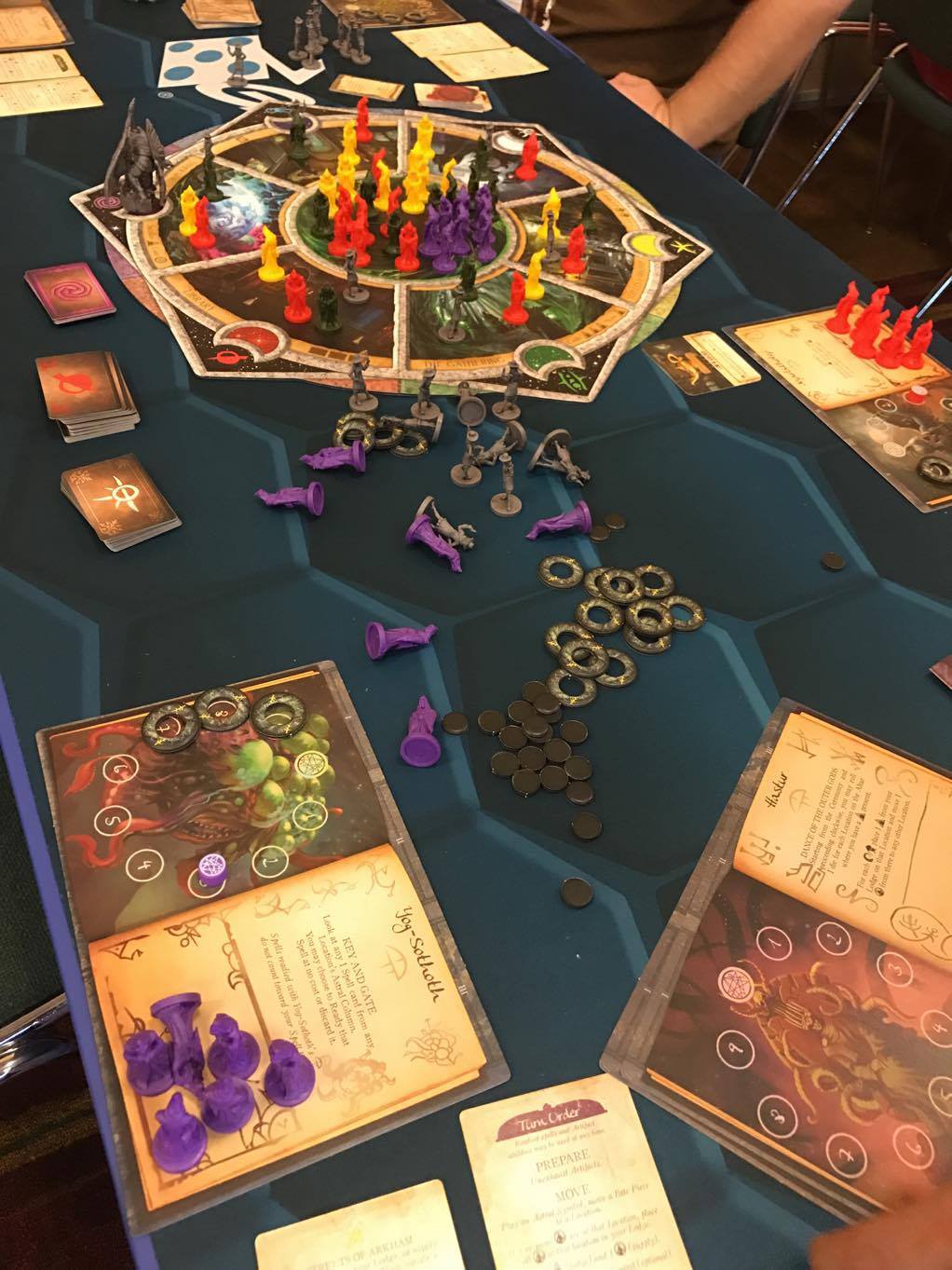 Gencon is, as it has been for the last two years, a sort of nerd Mecca for me. The con feels somehow earthier and more intimate to me than PAX, my other big convention experience. PAX is defined by the polish and shine, while Gencon is more like a reunion with old friends in a way. There's a palpable sense of emotional connection welling up from the ground here, rather than a hyper energetic cloud of media -driven frenzy to buy games. The culture at the two cons couldn't be more different in my eyes.

Sagrada by Floodgate Games was a beautiful dice drafting game centered around making stained glass windows. Each playboard can fit a card that acts as a template for your window, and each card is double sided, doubling the possibilities. Each card has varying difficulty, and the harder a card is, the more favor tokens you get. Favor tokens are small plastic beads you can use as currency to bend the rules of the game and help you build your window better. It’s a fantastic game for 2-4 players, but I enjoyed it so much, I could easily see myself playing it solo, just for fun. 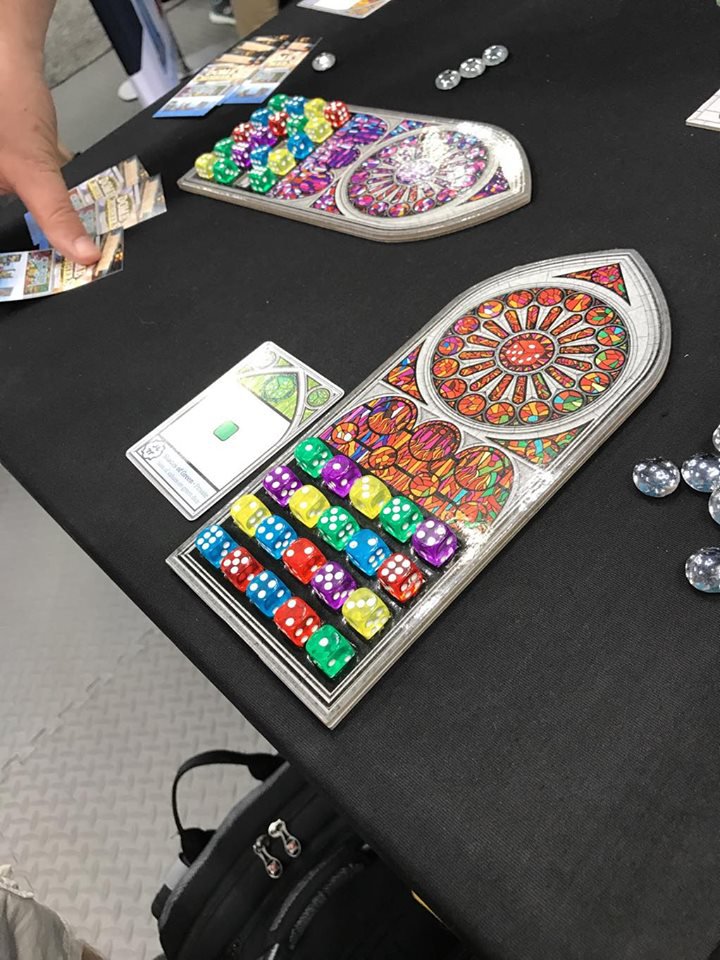 Adrenaline by Czech Games Editions is a really neat board game centered around the idea of “What if we took an FPS and made it into a board game?” The idea made me skeptical, but the execution is actually really nice. It’s fast-paced and easy to follow. The idea is that you play a robot trying to kill other robots, and nobody cares about the reason why. Other players get points based on how many times they shoot you, and this is marked by them putting their damage counters on your board, and vice versa. You get guns at spawn points and pay colored cubes to use them. You gain more actions for how hurt you are, and you can die and respawn for as many skulls are left on the board. It’s quick, easy, and fun, and I had a good time playing it. 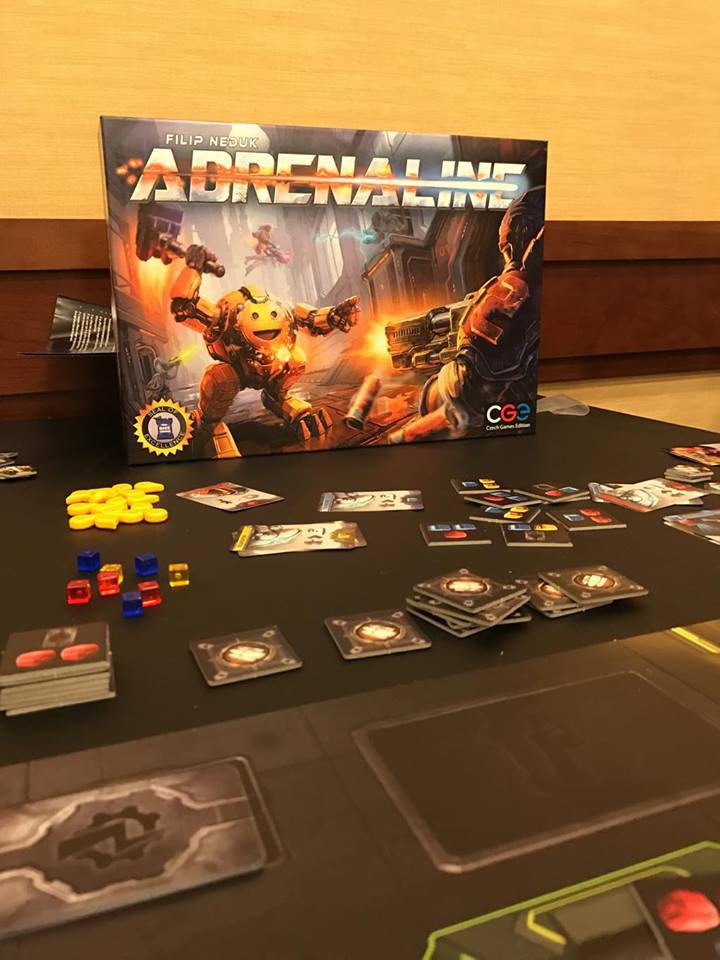 Overall I’d say my first time at GenCon is going really well. The developers and staffers are incredibly kind and helpful and the con is quite accessible to folks with disabilities. I haven't needed to smack anyone with my cane yet, so I consider that a plus, and the folks in the press room were great. I’m super tired from doing All The Things but excited to do More Of The Things tomorrow!