Manners in a Modern Convention-Going World

PAX East 2016 will be my first con, and it's got me thinking. I mean, when I was back in high school I once went to a card game convention, but it doesn't compare. It was relatively small, and mostly centered around a Magic: The Gathering tournament. I don't even remember where it was held but it couldn't have been all that far from home. PAX East promises to be a proper con, with music and megabooths and both guys and girls in cosplay. Needless to say - though here it is for posterity - I am hyped.

But I've also been doing a lot of reading, and I've come across things in the gaming community which are still quite shameful (it's a tough read, so be warned). It disappoints me that my hobby is still associated with this kind of dark-age mentality. The misconduct, to put it lightly, not only borders on criminal, in some cases it is criminal. This isn't what I want associated with me when I tell people that I'm a gamer; I want everyone in my hobby to be open, welcoming, and non-judgemental. I want people to feel as welcome to gaming (digital or analog) as I did in Norway when I took Netrunner with me on vacation.

And so, despite assurances from my friends that PAX is indeed quite a safe place as far as the community goes, I am still a bit on alert. This month, before I get to writing about some things in PAX that we're definitely covering, I'm doing something a little different and a little shorter than my normal stuff. Part of going to a convention is making sure you have a fun time, but I'm going to talk a bit about how to be a fellow human being to other con-goers. 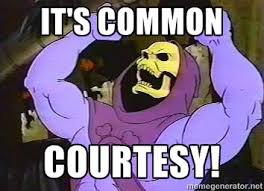 1: I'm going to start with common courtesy. Mom taught you to say please and thank you for a reason. Lets face it, if you've even so much as looked at photos online of a convention, you've realized you're going to be rubbing elbows with lots of other people. Situations like these call for you to remember those lessons you learned and be courteous to others. If you accidentally bump into someone, say “I'm sorry”. If you arrive in a line the same time as another person, maybe it would be best to smile and defer to them the next place in line. Also, if someone approaches you in the open gaming section and asks to sit in on that last demo copy your group swiped, be polite! If your game is full, I'm sure there's a friendly way to say so. Remember that your tone is just as important as any actual words you say. Part of being human is treating others like one.

2: Ok, so this point kind of piggy-backs the last one. Lets talk about communication skills. Lets say it's been a long day of convention-going. You've hit several booths, stood in lines for about four hours, fried your brain processing several amazing demos, maybe passed out for a bit in a lounge, and all you've had to eat all day was a sandwich about five hours ago. It's easy to be nice to other folks when you're tip-top shape, but it's a bit more challenging in the example above. If you collide with another person because both of you happened to be checking out the same exhibit as you crossed, it's easy to just keep walking like nothing happened. But in point #1, we mentioned saying “I'm sorry” before continuing on your way. Actually speaking up is the point of this bullet. It's not the first time I've talked about inventing stories to explain things, but it's very easy to make assumptions about others for the same reasons. Don't assume! You know what that makes out you and me. Be a grown up and use some words to resolve any slights that happen during the day. Maybe we can't change the whole world by ourselves, but your personal life will be a bit brighter for it.

3: Stepping it up a notch now; if you see something, say something. I lived for a time in NYC, and this was a common slogan found on the subways for reporting suspicious behavior (remember, security got bumped up after 9-11). With all the terrorist stories in the news these days, you really can't ride a NYC subway without the automated voice that calls your stops also reminding you that if you see something suspicious you should report it to an officer or other metro official. The same thing applies to inappropriate conduct you may witness at a convention, and I'm not just talking about things that could be physically dangerous. So you're taking points #1 and 2 to heart after reading them, and you're being mindful of treating others with the respect and dignity they deserve. But if you see someone acting inappropriately, you absolutely should not remain quiet. This includes all forms of bullying and harassing. Complacence might as well be paramount to guilt by association. By no means am I saying to start a huge altercation in public: approach the individual and call them out on it tactfully, or let one of the volunteers for the convention (like the red-shirted enforcers at PAX) know. Let them know that what they've done hasn't gone unnoticed. If another individual is visibly distressed, you can ask them if they need assistance or help them in reporting the inappropriate activity to the appropriate people. If we're going to have safe spaces in gaming, everyone needs to share the responsibility for doing the right thing. Don't be “that guy” (or girl) who goes home with a story of witnessing something that was wrong only to not have done anything and be left wondering, “I hope that other person is ok.”

4: Be mindful of stereotypes! This one might seem like a nitpick, but we as gamers can't start righting the wrongs ingrained in our culture if we're not aware of these things. It is absolutely 100% not OK to call something you don't like “gay”. It's a slur and it's offensive to some people. There are plenty of opportunities in our speech to correct things like this, even with words as small as being gypped. Similarly, you may not think you're saying something offensive to a female player, but simple comments like “Did you win that playmat” can be interpreted in all sorts of ways, many of them less than favorable (suggested alternate scripting: “Hey, cool playmat”). There is a longstanding exclusion of women in our hobby that many are fighting to change. As a guy, I think the burden falls especially hard on us to make sure we're doing our part. We are, after all, the majority in this hobby. I challenge you to examine your own speech and use that gaming wit I know you have to come up with another way of expressing your thoughts. That is, if you find you've got some of that in your humor. If not, I applaud you. It's going to take us all at our best to really make sure this hobby, and our conventions by extension, are safe places for us all to enjoy ourselves.

Let me leave you with this thought: I titled this piece “the gentleman gamer” for a reason. This gaming hobby, both in analog (board games/miniatures/etc) and digital (video games) has been dominated by men. There has been a lot of exclusion on the part of men against others, especially women, who want to get into this hobby. If you don't believe me, do some searching on the web and you'll turn up any number of articles and blog posts on the subject. There are plenty of women right now who are working to better the inclusion in gaming for everyone, but the hobby could use serious help from us guys. I'm as guilty as anyone else of losing myself a bit when I “geek out”, usually resulting in me being quite a bit louder than my normal self, much to my embarrassment (thankfully that's as far as it extends). But if everyone were just a bit more mindful of how we conducted ourselves, we might be making even faster progress towards welcoming everyone into these great games we all love. I urge you to keep that in mind during your next convention or public event.

Want to weigh in on the discussion? Are you also attending PAX East? Let us know! We hope to see you there.