Hand of Fate, and the Beauty of Early Access 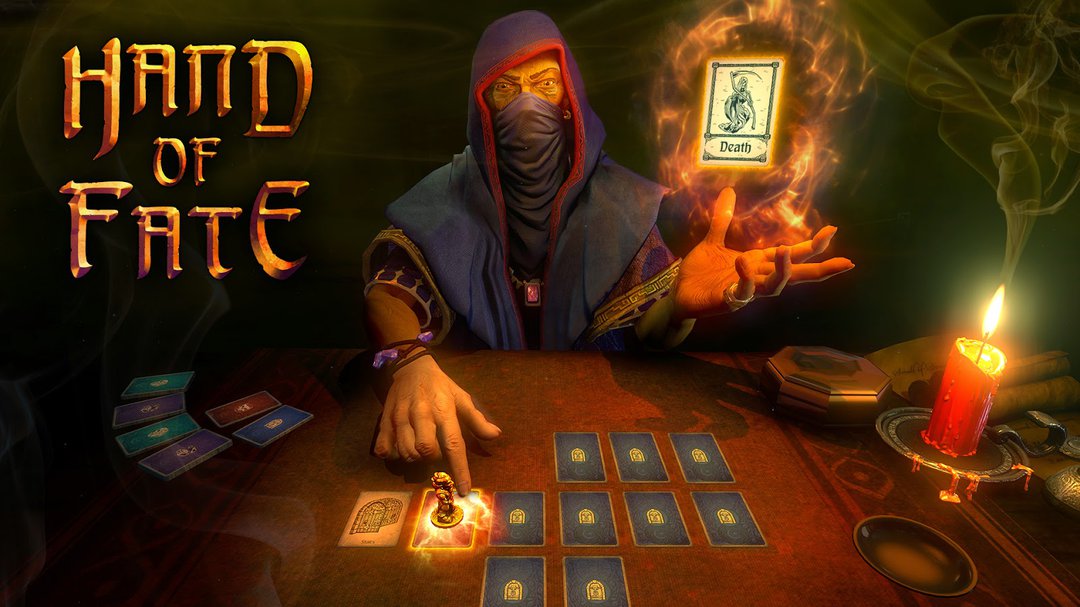 Since PAX East of 2014, I've been on this crazy ride with Hand of Fate. It's been a ride filled with anticipation, with rejection and frustration, with sudden moments of excitement when I realized that the newest patch was downloading as I woke up in the morning. Now, as the developers have announced the game is prepared for a final release, I can't help but be even more excited to open the game as it goes gold, to see how many things have changed for the better. It's a lot of fun knowing the next time I get a chance to shuffle the cards and fight through dungeons, its going to be more polished, a better ride than the last.

There has been a recent frustration with Early Access, calling it a a new trend, a new shortcut in game development that allows for lazy builds and presentation. A money grab, a way to steal from players by suckering them into buying an incomplete product. And yet... there is so much potential, so many new and exciting things that are able to be being done because of Early Access, opening up new doors for developers and players alike. Many groups are capitalizing on this, hoping to make the best of this new phenomenon, to use it as a chance to create the best game they can

For me, Hand of Fate has been a simple, eloquent example of this. Let me show you why.

Hand of Fate is a game I was introduced to back at the awesome indie megabooth of PAX East 2014, and it totally took me off guard. After a great talk with Morgan from Defiant Development, I knew I was hooked on the idea of the game: the brawling action that you could find in Fable or the Batman: Arkham Asylum series, but mixed with deck building and randomized dungeons? How was this not a thing already?

Turns out that the game had managed to complete a kickstarter in the last several months before the event, allowing for production to move forward for the small team. It didn't have the record successes of crowd-funding like the famed Pillars of Eternity, but it was enough to launch them into action, to start the process. By July, they were able to launch Early Access versions of the game, and as I got my code,the game itself was very open about the fact that it wasn't finished: 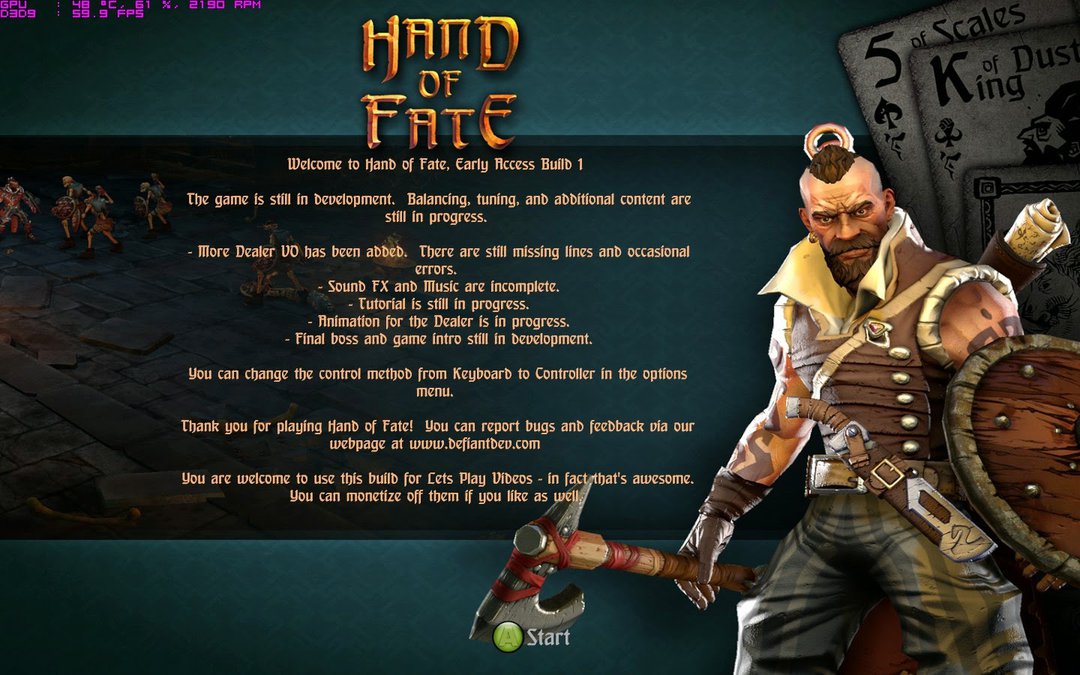 When I got the chance to get my hands on this, I was stupidly excited. A mixture of many of my favorite styles of games, Hand of Fate had seemed like something that was right up my alley. That was, at least, until I discovered that I couldn't play the game I had been waiting for for so long.

I'll openly admit, I simply couldn't play the game after Early Access. I don't exactly have the best computer, and whenever I opened the game, the resolution wasn't optimized. I couldn't get the game over 12-13 frames a second no matter what I did.

You know what though? That's okay . The role of Early Access is to help work out and resolve troubleshooting issues before the final product is released. There's a lot of complaints on the steam forums games are being sold unfinished, and in fact, its an issue in the whole industry, where fully published games show up broken. The difference between 'broken' games and Early Access is that developers are openly stating "hey, this isn't done. We want to show you what we're making, we want you as part of the process".

For me, Hand of Fate shows off some of the more positive aspects of early access: it's allowed the company to stay funded, giving more time for a small studio to finish their work, and polish the game. Again, my middling computer had a hard time running it in the early editions, but now before release, I have a wonderful above 30 FPS as they've had time and now data to optimize their programming for a huge array of different players and machines. My data of failed issues helped contribute towards a cleaner final product. For development teams that don't want to give into publishing companies for funding - hence losing some control over their own creation process - this is crucial, a needed influx of support both of stress testing what their game can do, as well as helping financially support game creators to keep making good content.

Of course, this game has been in Early Access for over half a year now. It's a long time to wait, I won't lie about that, but it's also been an enjoyable ride. It's been fun watching the opening screens of the game, with the ominous card dealer, go from this.... 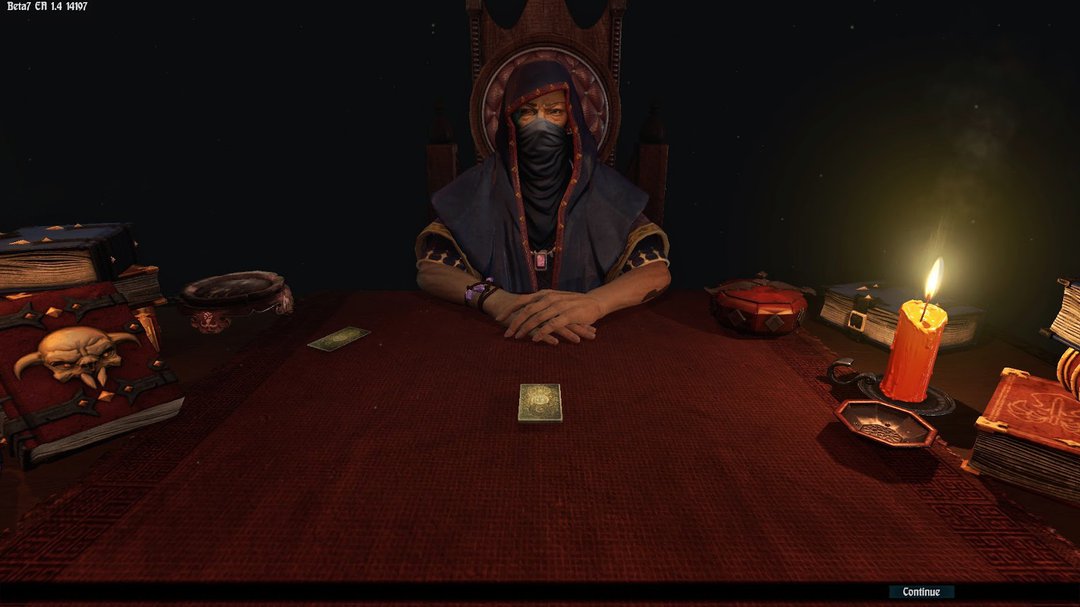 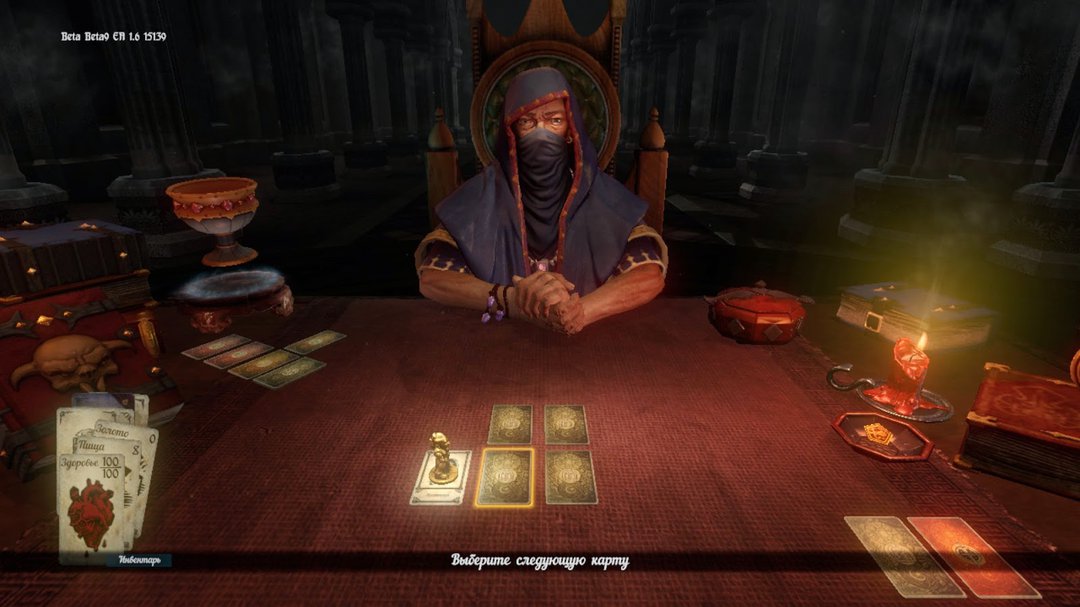 More happening, more in the background. Smoother textures, added graphics in the back that add to the strange mystery that surrounds this particular game: why exactly are you letting someone with magic cards threaten your life? As the camera pans around, you can tell you are in what looks to be an old ruins, or perhaps a forgotten temple. Little hints that add more the feel of the game; you don't realize how much the small details like a broken statue in the background matter to the ambiance unless you realize they weren't always there.

New enemies have been added over time, with better effects. I still remember the first time I managed to go up against the mages that are unlocked later in the game, and the battlefield erupted in glowing green lines that would strike me dead if I even got close. The sound quality of the game is worlds above where it had been; now that every single enemy howled and grunted, now that the music rises and falls around the mocking words of the card dealer, the entire experience is more engaging, pulling you in.

I still remember when I logged in after a month or two away from the game, and saw they had added an Endless Mode to the game, where the dealer kept stacking the cards against you round after round. It was like I had been given a brand new game again, that initial joy on trying something new fresh on my fingers as I desperately tried to survive for as long as I could. It had been something the people in Early Access had been asking for, and for our requests, the developers worked to get it into our hands quickly, to have a test drive of it all. 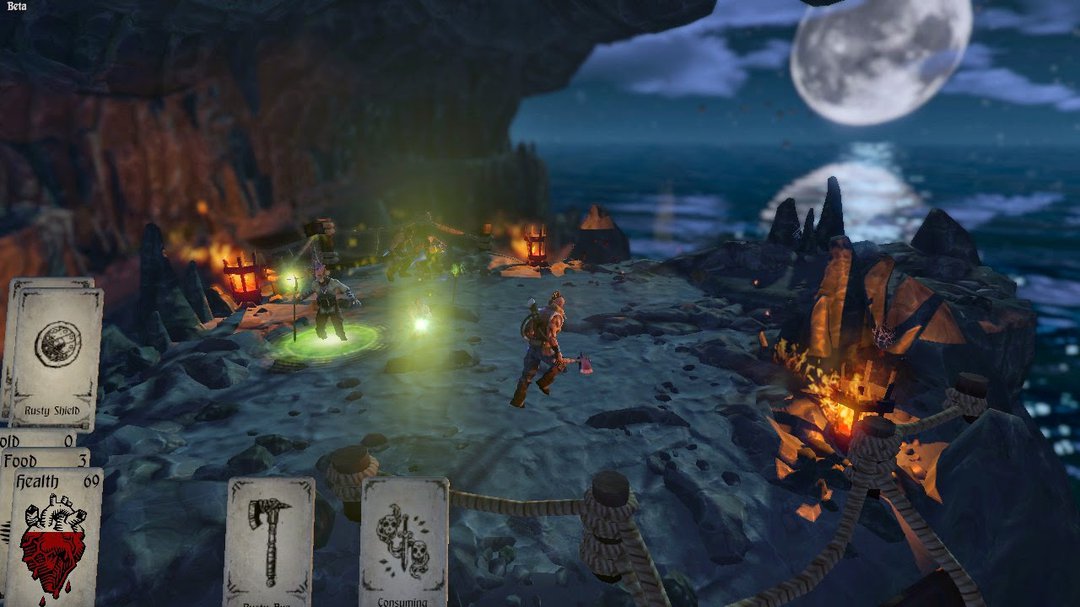 The rendering of backgrounds in this game is beautiful, and the varietyhas grown throughout the last year immensely.

This sort of direct interaction with the developer isn't an exception in Early Access, but more the new normal. One of the greatest strengths of this new phenomenon is the closer bond between game creator and player; I've spoken openly about my love of Endless Legend, and it is important to note that the game was a product of Early Access, so much so that Amplitude Studios let their players collaborate to come up with one of the factions in the base game, including their art direction and design. It's hard to beleive the creepy robotic cultists in that game weren't part of the original plan, but because of the collaboration that's made possible in this new way to 'beta' a game, there are many games that go to final publication with more content and personal touches than they had started with

Let me be clear: I don't think early access is for everyone, and for every game. As much as I can ramble on about the various games I've enjoyed playing through as they get better, there are some that I simply wait for true release to play, to experience just the final product. I have several friends that won't touch a game if they even smell the word Early Access, and that's okay: this is a relatively new experience in gaming culture, and one that's going to take a while to adjust to, both for developers and the players alike.

We have to be honest that putting down your money on an Early Access game can be a risk, just like Kickstarter investments that sometimes go wrong. Take a look at the Steam game Spacebase of 9, a game where the sun and moon was promised, but it was left in development limbo, leaving people with half-filled dreams and hopes. Games like this should be panned, and criticism should arise when expectations are left unfulfilled. But for every game like that, there two more that use Early Access to openly interact with their audience, calling for suggestions and community input to make the best game they can. Just look at Dungeon Defenders II: it just recently hit early access, and has developed a really great influence system, where the most active players can vote towards which new features get worked on first. 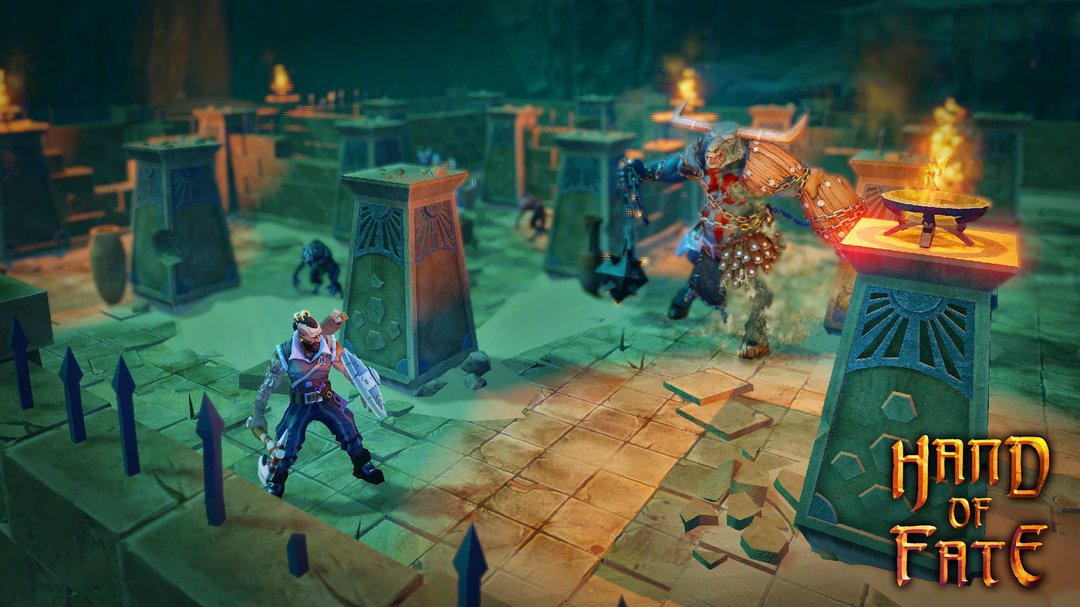 Then, there are games like Hands of Fate, where it's simply a joy to watch as the game grows before your eyes, making you appreciate the final product even more once it arrives. It was a good, solid indie game soon after arriving on the Steam market. Now? I prefer more than the AAA, sixty dollar entry price games that I've tried recently. There's power in Early Access, in giving the developer a chance to take more time to work on their pride and joy.

Now if you'll excuse me, I have to go scour the internet for a possible release date for my recent obsession. I stopped myself from finishing the story mode about two thirds of the way through, and I'm just dying to see what it looks like after the final touches are applied. One year later, and I'm somehow more excited for this game than I was at the start.