Hellblade:
The Power Of Perception

Messages In A New Medium

Perception is reality. It's a simple statement that has a profound ripple effect throughout my life and work. It comes from my office, where there's a responsibility on the part of everyone to self-examine and be conscious of how we portray ourselves. It’s a lot less helpful to blame others for their reactions when you might instead prevent simple misunderstandings with a slight change in word choice or tone. It's as great of a life lesson as it is a work practice, and I’ve applied this sentiment in many other settings to no less effect. Perception is reality.

You came here for a piece on Hellblade: Senua’s Sacrifice however, not a treatise on my office policies. You’ve probably heard about this blade-wielding tale, how it gives you a full combo list but no tutorial, leaving you to figure out combat on your own. How it supposedly gives a limited amount of reloads on your save file before taking Senua out of the action for good (read: permadeath). Maybe you’ve heard some things to the contrary. And perhaps, as a digital-only release, this title has slipped completely under your radar. Like the saying at my office, this game is what you make of it. A seemingly innocuous sentence with deep implications. Read on if you'd like to see how deep they go.

Spoiler alert! There’s no real way to talk about what needs talking about without spoiling a few plot points. If you're ok with that, then lets do this. 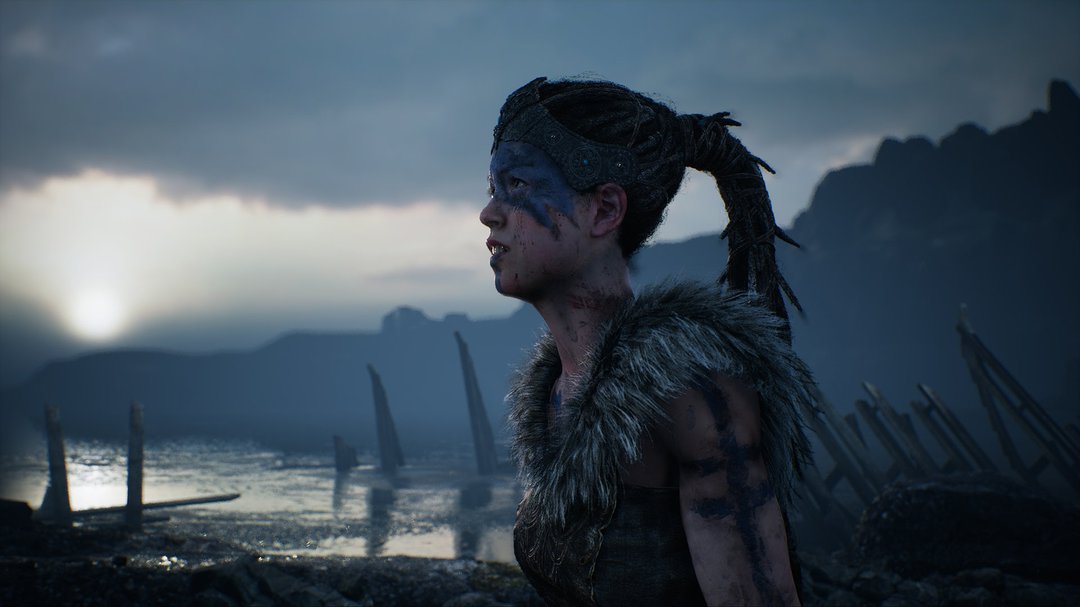 Also be warned, some images from the game may be disturbing to some readers. The game itself comes with a similar disclaimer when it loads.

The story of Hellblade channels a bit of an Orpheus and Euridice vibe. Though we’re not told the full details from the outset, Senua, a Pict warrior, has set off seeking an entrance to the Norse land of the dead. Someone she loves has passed away before his time and, carrying his head wrapped in a cloth on her belt, she seeks Hela, goddess of an underworld not her own, who holds his soul. Whether intending to bargain for the release of her love’s soul or fight the goddess Hela herself, Senua is soon afflicted by a rot that threatens to consume her as well.

Though the opening starts straightforward enough with a journey, a clear goal, and bad guys to fight, things quickly get much more complicated. Through flashblacks we learn of the mental illness that plagued Senua’s mother and how Senua likely inherited it; the voices she hears never leave you as you work through the game. We learn that Senua’s father, the head druid, was not a very understanding man and abused his daughter in an attempt to drive out “the darkness” from her. We see how Senua meets her love, how he encourages her against the dark, and how he ultimately meets his end in a brutal sacrifice following a Viking raid that wipes out Senua’s village. Playing through all of this, if you still believe the story is just a simple tale of a journey through the underworld, the ending of Hellblade makes zero sense and will leave you baffled. Perception is reality, though. If you're questioning how much is meant to be taken literally, you're on the right track. 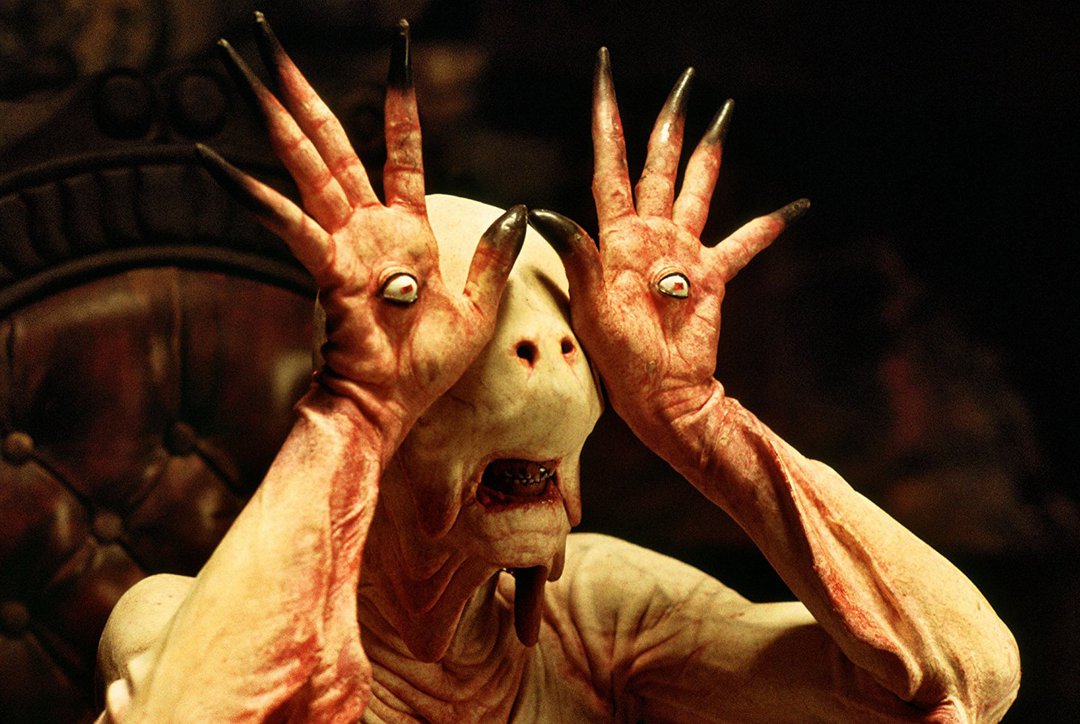 Do you remember this movie? I'm gonna talk about this movie now. Trust me, it's relevant.

In a lot of ways, playing through Hellblade reminds me of a movie I saw over a decade ago: Pan’s Labyrinth (El laberinto del fauno in the original, Spanish release). Pan’s Labyrinth is a story of a young girl, possibly a lost princess, who conquers challenges within a fantasy world while the real world around her is involved in the guerilla warfare of a 1944, Nationalist Spain. The first time I saw it, it didn't sit quite right with me. Something seemed off, though I couldn't put a finger on it, and I took the movie very literally as I watched. I believed the girl’s fantasies to be real, since that's what we see. They're as real to the audience as they are to the girl. And believing that, the ending seemed alright. Happy even. I liked the movie so much I ran out and bought the DVD only to read the back of the cover. Turns out the girl’s fantasies were just that. Fantasies. Watching it again, the movie became even more powerful as the initial gnawing I felt gave way to the further meaning that the director had intended. And tears. The ending’s pretty sad once you realize what’s going on, though its message is powerful. You should watch it if you get the chance.

Likewise, if you believe Senua’s journey to be a literal one, you’re only really experiencing half the story. Everything appears real to us because the narrative is centered within Senua's perception. To her, it is real, but it has about as much physical substance as a dream. Senua isn’t so much a Pictish Orpheus as she is trapped in her own mind against the horrors she has struggled against her whole life. Struggles brought to a head when she returns to her ruined village and has a complete breakdown. At its heart, Hellblade is a story about the struggle against mental illness. It explores what happens when Senua is plunged deep into her own psychosis, brought on by seeing the brutality left in the wake of the Viking raid on her village. Senua's perception becomes our reality. 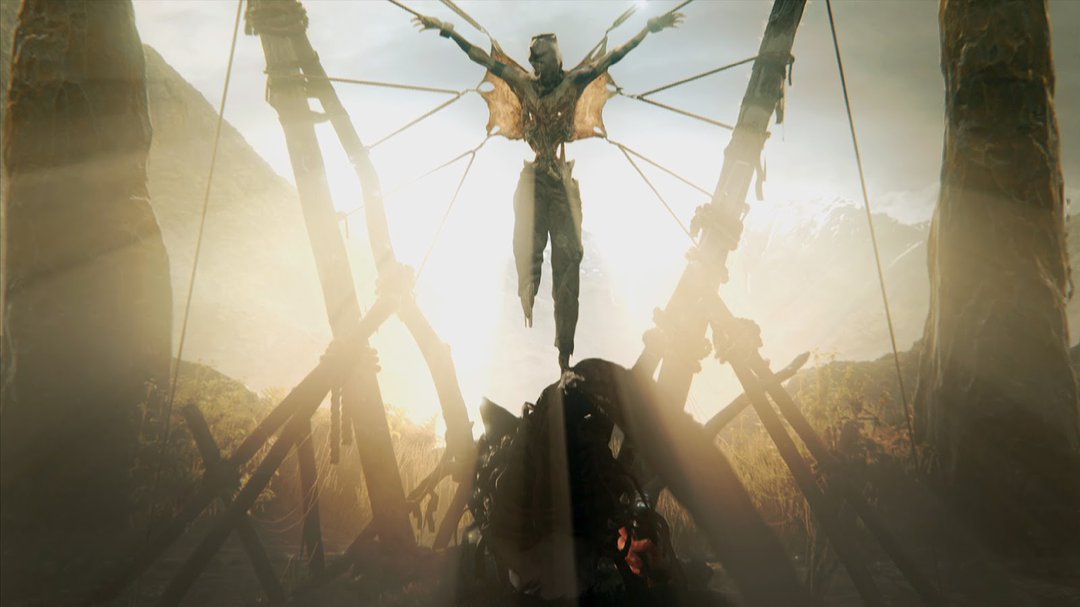 There is some debate as to whether the blood eagle sacrifice was real or just a literary invention. That's Seunua's significant other, by the way...

Beauty In The Eye Of The Beholder

Movies and books have the marvelous ability to help us share in a perspective not our own. They can help relate to us things we might not otherwise understand simply by being told. In a way, we’re allowed to live them, albeit temporarily. Yet when we talk about video games, this isn’t a phenomenon often discussed. Hellblade: Senua’s Sacrifice brings this to the community in a way that supporters of games as a medium for bigger ideas so desperately desire. The community response was a touching one, sharing personal stories and sentiments in online forums that perhaps some had stopped trying to get others to understand. I’m being very serious here that if you just glossed past that last hyperlink, please take a moment to go and watch the video that Ninja Theory posted using feedback from the community.

I’ve seen some criticisms of Hellblade, that it “gets things wrong.” I’ve seen some with mental illness come down on it that it misses the mark with their illness. There’s an oft quoted line from Dr. Stephen Shore: “If you’ve met one person with autism, you’ve met one person with autism.” It’s a line meant to show that no two people who live with a mental illness are the same; your perception of one shouldn’t be the reality for all. And while it’s true that a game like Hellblade can’t claim to speak for all mental illness, I think that asking it to is missing the point. It makes a statement and shares an experience about one young woman and her personal struggle. In doing so, people in the community have come forward saying how it’s helped others finally understand their own struggles.

And I think, perhaps, that’s exactly the point. Thanks to sharing in Senua’s perception, some of us can finally understand a reality so far from our own as to be otherwise incomprehensible.

If you’ve let this title slip by you, and especially if you have someone in your life who may suffer in a similar darkness of not being understood, check this title out. It’s time and perception well spent.