It's Time to Move On From #GamerGate 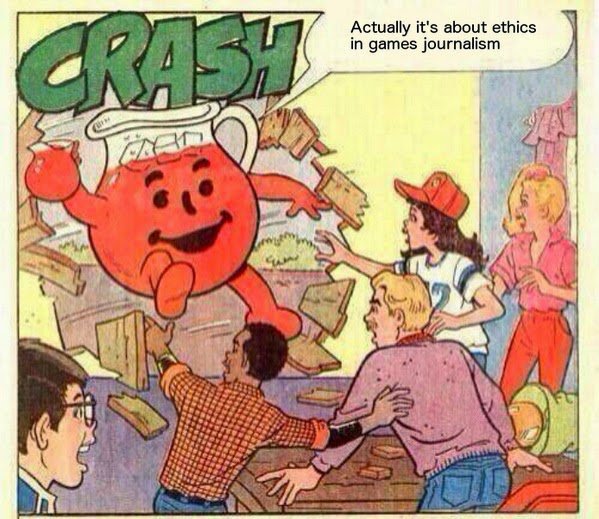 A little over two years ago, the internet unified for an entire day to fight a legislation that would have changed the internet as we knew it. Wikipedia, Reddit, and other giants of the web temporarily blacked out their websites in protest. People rallied to call their local politicians en masse in order to spread word about it... and these people won. That legislation was known as SOPA, or the Stop Online Piracy Act. While it was pushed as a bill meant to fight piracy, it was really a threat to the very infrastructure of the internet. It was easy to hate SOPA, because it was easy to see that it would do more harm than it could ever do good. SOPA was a thinly veiled effort by media lobbyists to take control of something they barely understood.

Somehow, those seem like simpler times in comparison to GamerGate.

GamerGate, as it stands, is extraordinarily difficult (and embarrassing) to describe to the average person. Many supporters of GamerGate claim the movement is about encouraging ethical practices in gaming journalism. Unfortunately, it is also burdened with the baggage of many death and rape threats, threats that are linked directly to people who claim to support the movement.

Ethics in gaming has been a hot topic for quite some time, and that's not a bad thing. Jim Sterling's Jimquisition is well known because it makes a point to call out things like DMCA takedowns and paid-for reviews. Kotaku and the entire Gawker network have been under fire pretty consistently for their approach to games writing. Ethics in the industry have been discussed pretty frequently in the past, but right now every discussion about ethics is being thrown under the umbrella of GamerGate - whether the conversation started that way or not.

As well intentioned as this movement sounds, GamerGate is a term that needs to be dropped from our collective vocabularies if we want to make any progress whatsoever. It's a movement that started with an angry ex-boyfriend's rant about his ex girlfriend, one that caused Zoe Quinn to receive mounds of abuse from angry gamers in the name of "corruption". As the movement has grown, it's become a fight between the social justice crowd, the gaming ethics crowd, and trolls who have nothing better to do but harass people in the name of ethics.

GamerGate is synonymous with threats for school shootings, threats that drive women out of their own homes. It is known for doxxing the people who have worked up the courage to speak out against it. If you use the hashtag #GamerGate on Twitter, it's almost inevitable you'll invite some form of vitriol or criticism from a GG supporter, especially if concerns about feminism come up. The one hashtag that seems feminist, #NotYourShield, has been proven to be manufactured by people on 4chan with the specific intention of making the anti-gamergate side look bad. It is at this point that those who support the "fight for ethics" need to take a look at the people they stand beside and ask themselves, "Are we fighting for the same thing? Is this productive?"

Whatever GamerGate means to you…I’ll tell you what it means to the rest of the world now…gamers attacking women. It means a completely irrational response to very moderate critiques and insignificant drama. It means, at this point, actual assault and the worst kind of misogyny. I’m not saying that moderate voices are misogynists…I’m saying that they misunderstand the reality of this cultural phenomenon. - Hank Green, It’s Time for the Moderate Voices of GamerGate to Take a Stand Against GamerGate

The first use of the #GamerGate hashtag was barely even two months ago as of today. In two months, we've seen a tirade of threats sent to those against the cause, and very few productive things from the cause itself. This is a cause that started with digging into someone's personal life in an attempt to uncover a conspiracy that never existed. Just think, in two months, will GamerGate be known as a movement responsible for great change in the industry, or will it still be shaking off the baggage of these past two months?

SOPA was defeated because it was something everyone could stand against. It claimed to want to fight piracy, but in the end it represented nothing but bad things for the internet. While there are many genuine vocal supporters of GamerGate, it's time to realize that the title of the movement is inherently flawed: GamerGate represents bullies, misogyny, and everything wrong in the gaming community. It makes those who genuinely care about ethics look like they are silently supporting all the bad sides of this movement.

Look at it this way: try to explain GamerGate to your parents, a coworker, or anyone else who isn't involved in the gaming subculture. Take the time to explain that its not supposed to be about violently attacking women, hacking their computers, or misogyny, but instead its meant to be a rational discourse about the ethics of video game journalism. Talk about how this is a topic that needs to be addressed, that this is an attempt to move things in a good direction.

Now, after that conversation, they Google GamerGate. What is the first thing they are going to see? New York times articles about threatened school shootings. Twitter post after post threatening rape because its funny.

No matter what side of this debate you're on, it's time to acknowledge that GamerGate is going to continue to create a rift in our community. Those that stand against bullying have already been vocal about their disapproval for GG. However, to those who support it, those who neither encourage or condemn the actions of bullies, those who say bullies are "just a few of us" - realize that those few are all the outside world sees. Your ship is sinking, and it's time to build a new one we can all be proud of.