Kratos And My Dad:
Part 1

A Pinch Of Unending Criticism With A Dash Of Masked Caring 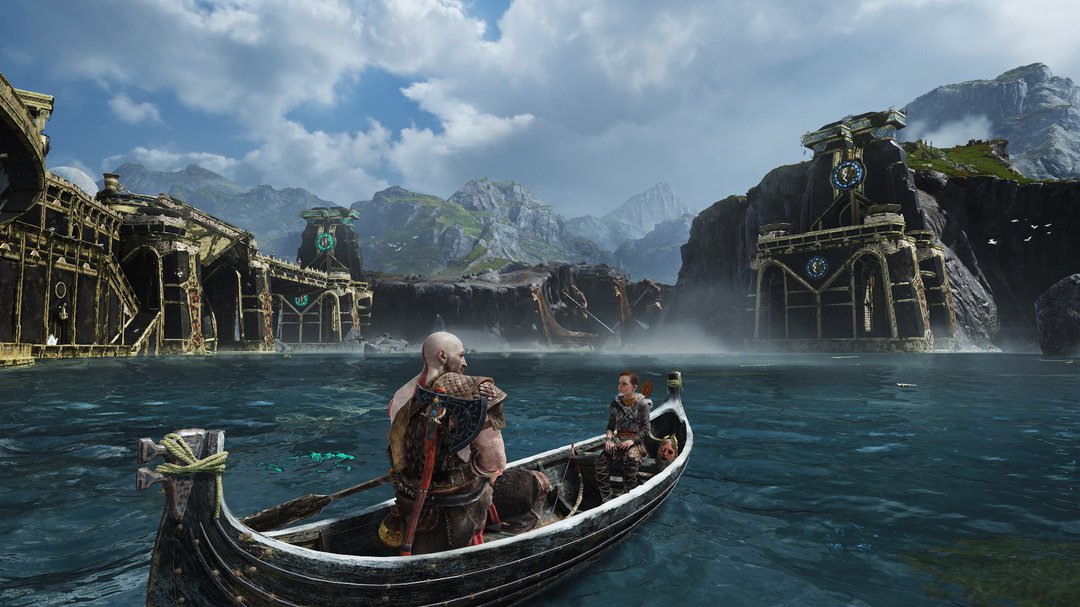 Tearing mountains asunder and murdering gods aside, Kratos and my dad have a bit in common. Both have a similar style of fathering, neither of which I’d rate highly.

To preface, I’m only around 7 hours into God of War. I hope and expect the relationship between Kratos and Atreus to change over time, so these impressions are of that relationship early on. My father also left my life right around the time Kratos rentered Atreus’s. For both of these reasons the comparisons I can make between Kratos and my dad aren’t one-to-one, but the things I see in both of them are undeniable. Both set their expectations astronomically high and struggle with wanting to show affection while being unable to. 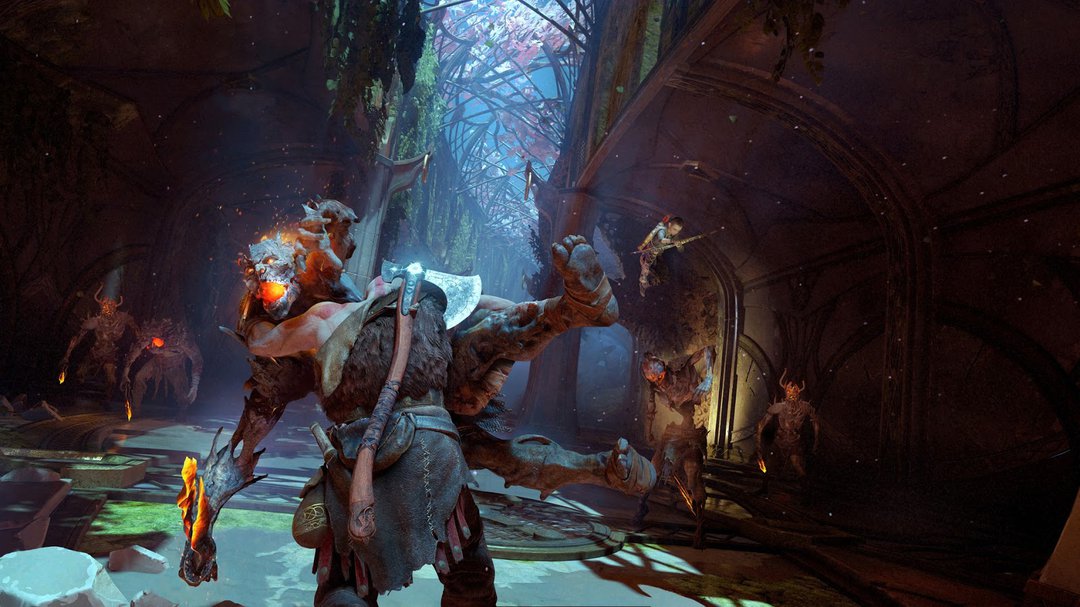 Atreus doesn’t need babysitting, he can take care of things on his own.

Atreus is an extremely useful character. In combat, he synchronizes and compliments my attacks at the perfect time, almost every time. There are types of enemies that ignore damage and will launch their own strike halfway through receiving a combo, causing me to cut it off and roll away. On several occasions, Atreus has jumped on that enemy’s back mid-combo, allowing me to finish it in spectacular glory.

Naturally, after these fights, Atreus gleefully asks his father what he thinks of the performance. As a player, I want to leap through the screen, pick him up, and spin him around, telling him how proud of him I am for letting me seperate a monster’s head from its body in an explosion of gooey orange blood.

What does Kratos offer? Could be better, boy. When Atreus throws him health? You’re not ready, boy. When he shoots an enemy, allowing me to hit what would otherwise be too elusive? Fire slower. You need control, boy.

Atreus is also integral to solving puzzles. When I’m doing the wrong thing, he’ll let me know. When I don’t yet have what’s needed to solve it, he’ll let me know. I, and by extension Kratos, would likely be banging my head against a puzzle for way longer than necessary if it weren’t for that child.

When Kratos needs something read, he relies on Atreus. In so many instances he relies on him. And yet, you never hear an ounce of gratitude from Kratos’s spittle launching mouth, only criticism when his son shows emotion or drops his knife.

When I secured my first internship at a newspaper, my dad asked why I didn’t get something paid. When he saw me for the first time in months to pick me up from college, he volleyed unprompted critiques on my packing method. He only needed one suitcase in the navy, why did I have so many things?

I relate to Atreus through this seeking of his father’s approval, only to never get it and eventually, grow to never expect it. When that time comes, the neverending criticism sent your way gets easier to take, little by little.

My dad isn’t quite as incapable of showing gratitude as Kratos, but the act seems uncomfortable, almost unnatural for him. The same could be said of showing affection. 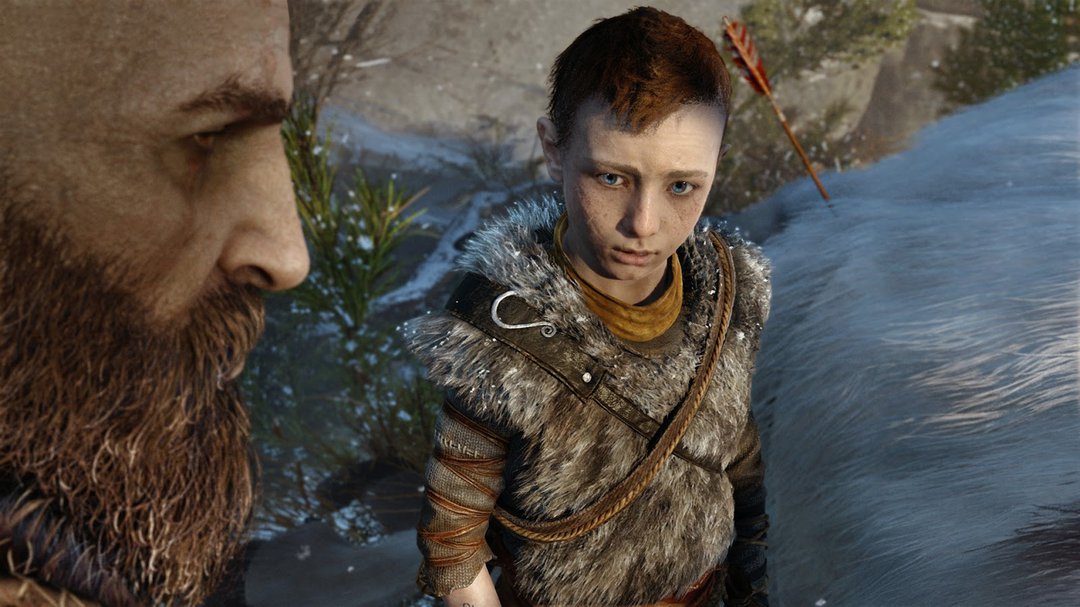 Atreus looks at his father like, well, a god.

My dad isn’t the kind of guy that says “I love you.” I’m not saying he’s never said it, but if he has it’s been long enough or few enough times that I don’t have any memories of it.

And yet, I don’t question if he cares. He manages to express that in his own ways, like surprising me with something he knew I wanted or going out of his way to help me (he still drove out to my college to get me). I don’t question if Kratos cares about Atreus either.

People have been drawing parallels between God of War and The Last of Us. I see some: I’m always scouring beautiful areas looking for hidden goodies, and my child companion is actually useful in combat, but I don’t see many similarities between Kratos and Atreus’s relationship and Joel and Ellie’s.

In the beginning, Kratos never makes me feel like he wished Atreus wasn’t around like Joel did with Ellie. He’s excessively hard on the boy, sure, but he doesn’t stumble across him, get stuck with him, and try to pawn him off on other people. He comes back to Atreus, and wants him by his side. 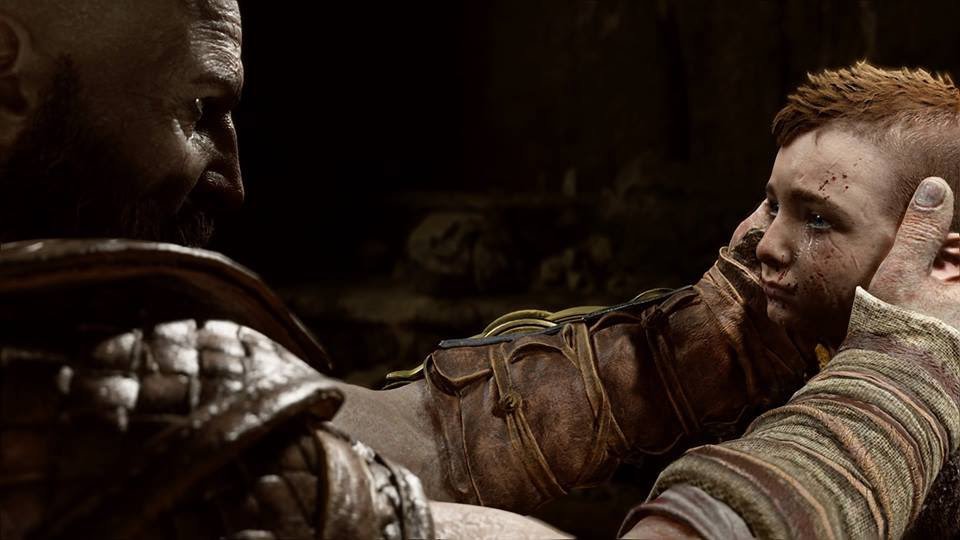 This one shot says a lot.

For this reason I believe Kratos loves his son, but that doesn’t mean he’s good at showing it.

At one point Atreus gets seperated from Kratos and surrounded by enemies. Kratos expectedly goes into a rage, but it’s at the thought of something happening to his child. On another occasion, Atreus sulks by a mountainside. Kratos reaches out to comfort him, but can’t bring himself to do it.

I see my father in a similar way, so much so that I wonder if there was ever a moment he reached out only to retract his hand. Their actions are reprehensible, but both men want to be good fathers. I can only hope that as I continue to play, Kratos clearly and unmistakably lets his son know he loves him.