Lessons From Fallout 3
One Decade Later

Celebrating The Past To Learn For The Future 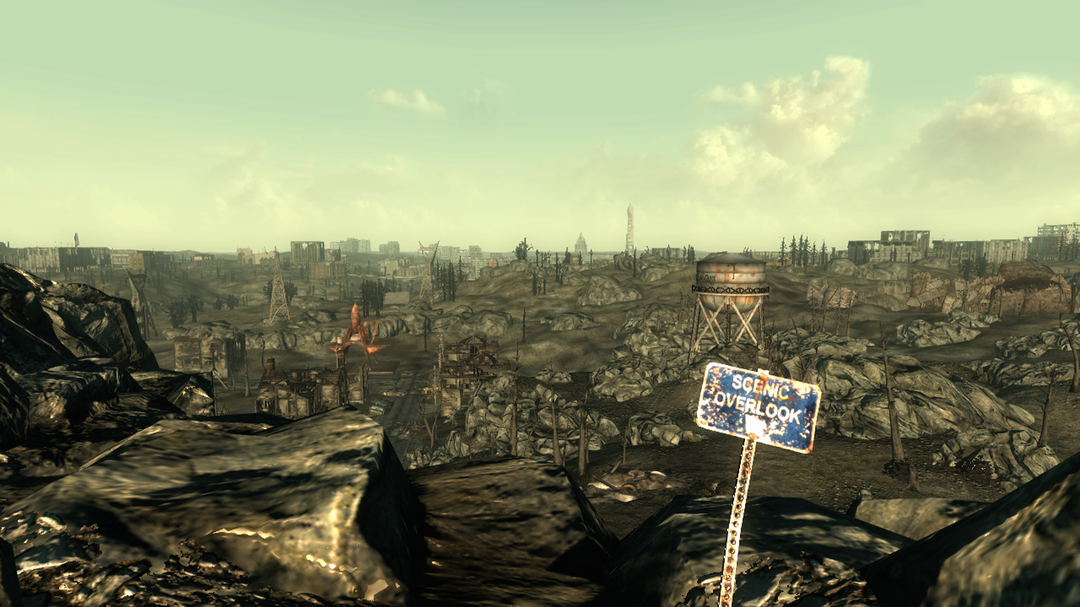 2018 marks the 10 year anniversary of Fallout 3, a game almost unrecognizable from its predecessors. That makes now the perfect time to reflect on its ingenuity and see what can be gleaned for future generations.

Fallout 4 sold fantastically, but many fans like myself were disappointed by how uninspired it was. It clung too tightly to 3’s coattails in some storytelling ways I didn’t care for while removing some of the things I did. Its biggest change in the form of base-building fought me at every snap of walls clicking together, causing my eyes to glaze over the few times I engaged with it.

The franchise needs to pivot if it wants to recapture what made me love it, so I’m travelling back to the world of 3 to see what I want from the next Fallout (I think I can rightly assume there’s going to be another). It’s safe to say there’s some work that needs to be done if it wants to start a flame in my heart. 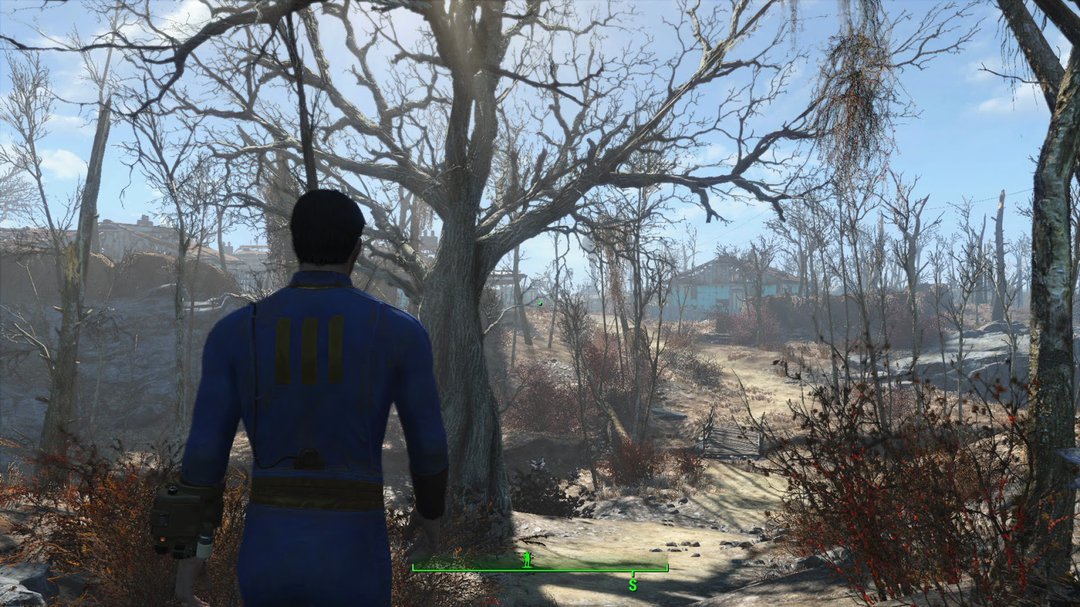 I can almost see the beauty, but there are still too many dead trees. Screenshot courtesy of Bethesda.

A Comparison Of Worlds

3 has a strange kind of peacefulness to it, like things are just starting to get better from a time when everything was much, much worse, despite how bad it still is. I’ve found serenity several times in the wastes, doing nothing but jogging about, taking in the barren fields. The proverbial dust hasn’t cleared yet, but it’s getting there.

4 boasts a furthering of this atmosphere. It takes place 10 years after 3, and in that time humanity has taken steps towards rebuilding civilization. But here’s the problem: it wasn’t enough.

The Commonwealth is a rainbow compared to the Capital Wasteland. The water and sky are blue and the little bit of grass is green. Crossing the bridge to Sanctuary, I was taken aback by how much foliage remained on the path, how I could actually hear a brook running. But it’s all relative.

Without previous wastelands to compare it to, 4 still feels dead. The roads are still broken, rubble is everywhere, and most buildings are still ruined. When I opened the fence to Diamond City, the Great Green Jewel, I was at least expecting its citizens to have sheets on their beds. Having comparisons to the past makes it seem better of course, but it’s nowhere near as lively as I wanted.

In comparison, the Capital Wasteland is a dreary place of green-gray-brown rubble. Stepping out of Vault 101 now doesn’t hit like it used to, I’ll admit it. Both graphically and in terms of scale, the whole ‘stepping out into a bright light that theatrically reveals the world’ shot is a product of its time. I’ve seen plenty of beautiful and expansive open-worlds in the past decade, so the showcasing welcome doesn’t stand out like it used to. It at least has an excuse. After all, we’re not going to criticize grandpa for not looking as good as he did in his heyday.

However, when I first played 3 I felt like I was venturing out into a massive, hyper-immersive graveyard. Part of me genuinely didn’t want to leave the comfort of the vault. The wasteland was still, calm, eerie, but pretty. Now? Not so much. And yet, what it lacks in beauty it makes up for with atmosphere.

It’s telling that until recently a crack team of modders were working on recreating the Capital Wasteland using 4’s engine. Unfortunately those folks ran into some legal problems that halted the project, but the effort they put in before its cancellation shows how memorable that world is. 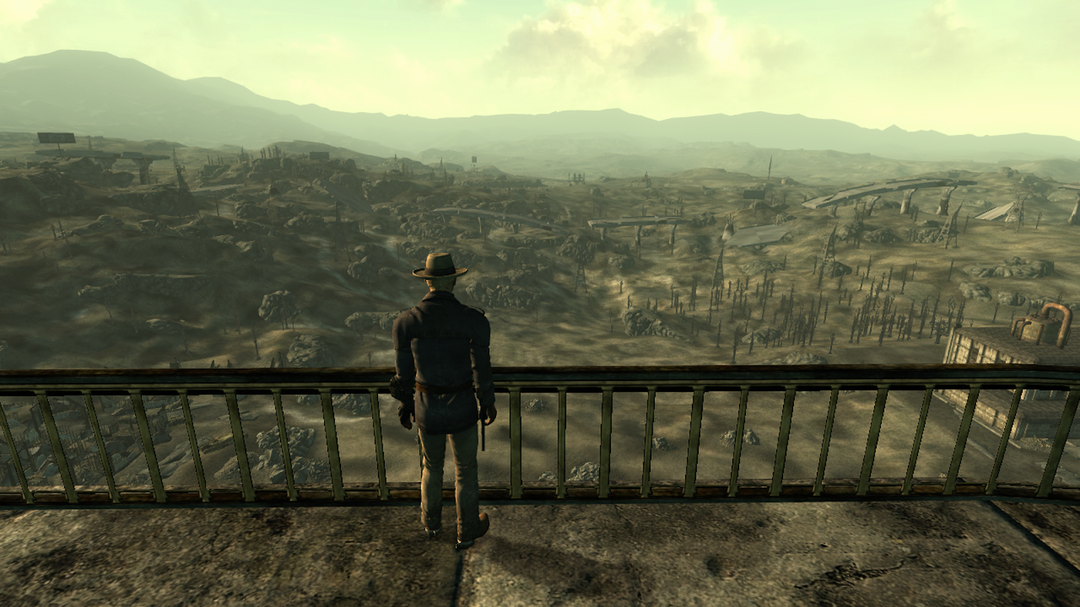 He had to grind for his view.

The next Fallout needs a world just as memorable. As weird as it sounds, they need to move away from wastelands if they want that to happen. They need diversity; give me a snowy landscape, a dense forest, a booming city. Heck, one of those can even be the designated wasteland zone. The whole map doesn’t need to be perfectly pristine, but I’ve been spoiled by games like The Last of Us and even Sea of Thieves, where the natural beauty of the world permeates every set piece. The stereotypical post-apocalyptic hellzone simply doesn’t appeal to me as much anymore.

Before you, the kind reader, point out to me that a post-apocalyptic setting is integral to a series properly titled Fallout, and that maybe the series simply isn’t for me anymore, I have a request. Fallout is replete with charm; it has creative weapons and armor, colorful music, factions that interact and compete in interesting ways, and a beehive of a world, filled with people ready to ask for your help in their humble or ridiculous lives. How much does it really matter that everything around you is broken?

In Fallout 3, the space you traverse is half as important as what you come across in it. Take for example Oasis, a secluded community filled with lush plant life and zealots who worship a man-tree hybrid. There’s nothing else in the wasteland like it, and when I first stumbled across it all the way up north, I truly felt like I had found some great secret, like I was special. 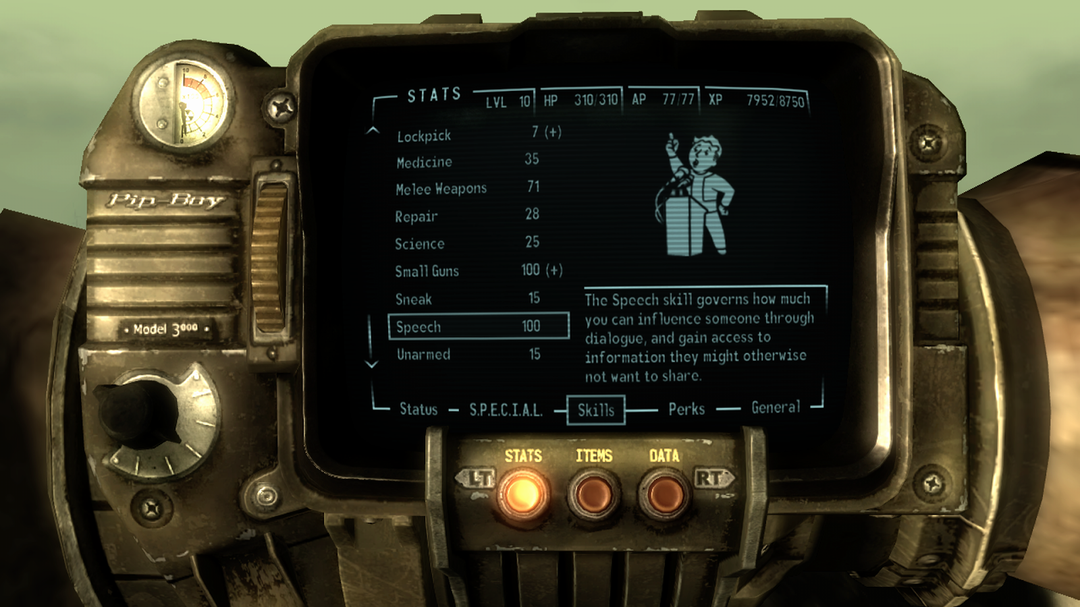 The Right Way To Get Stronger

Despite the graphics aging poorly, Fallout 3 is still good at making me feel special. There are a few other reasons for this, one of which is the way I level up.

It might not seem like a big deal, but having skills plays a huge role in feeling like my character is getting better. When I create a character in Fallout, I like to come up with my own backstory. It usually interweaves with the backstory provided, but largely it’s my own thing that doesn’t come up in game beyond what my character would say in any given moment or how they would complete a quest. It doesn’t matter that I personally wouldn’t want to detonate the atomic bomb in Megaton; if the character’s backstory dictates it, that’s what’s going to happen.

The skills and perks I choose to invest in are also decided by this backstory. For example, I once made an evil character who adopted the persona of a cowboy because they were often portrayed as a symbol for justice. This allowed him to gain people’s trust easily before betraying them because he believed in order to survive and thrive in the wasteland, you had to ruthlessly do anything necessary. Sometimes that meant blowing up a town and wiping out children and families in order to gain residence at a nicer, more secure location. He wore cowboy armor and used a revolver; I invested in cowboy related skills like small guns. Pumping points into relevant stats when he leveled up was the manifestation of getting more experience using his persona. By the time those stats maxed out, it truly felt like he was an unstoppable force of deception.

In 4, leveling up is reduced to choosing perks. That’s it. Every character becomes a master of none because they are equally proficient with any kind of weapon, and the sense of progression that I feel from a role-playing perspective goes down the drain. This is a pretty simple request for the next Fallout: bring those skills back!

As a side note, combat overall has been refined to a level I can really appreciate (I can finally play without using VATS!). If there’s one thing I would love to see stay the same from 4, it’s the shooting. However, and this is a big however, melee combat got all sorts of jacked up. It has essentially degraded to an alternate way of approaching certain situations, and is no longer a feasible playstyle to build a character around. It’s a simple fix: keep the parry, increase that swing speed. 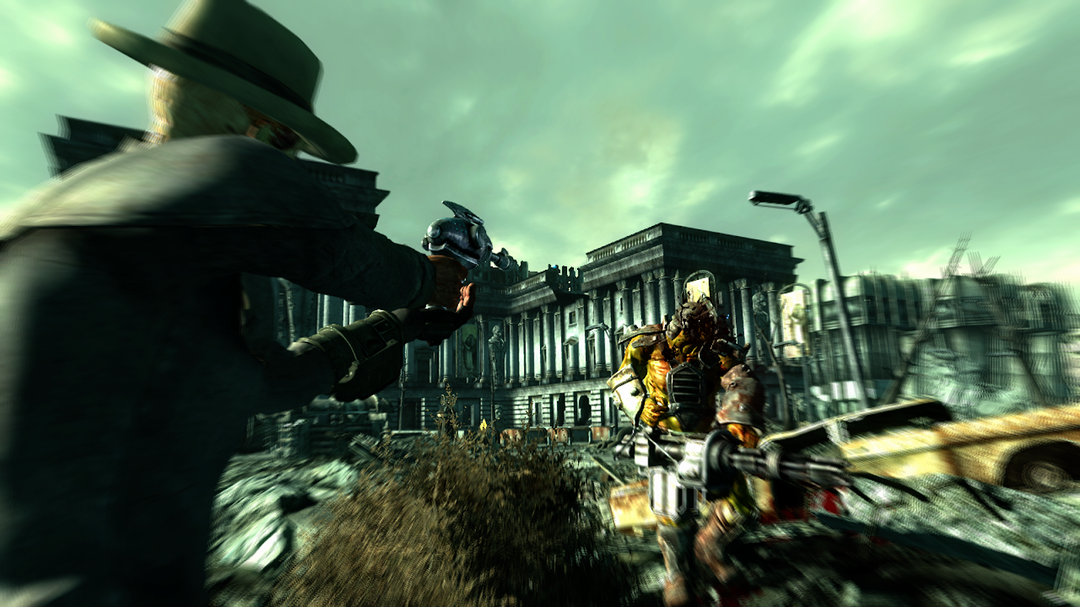 Ah VATS, how I sorta missed you. But not really.

Fixing the story of 4 is more complicated, especially since 3 suffers from the same problems. Both games center the story around finding a family member. The Lone Wanderer has known their father for years, while the Sole Survivor feels the strong, instinctive pull of a parent to protect their son. Both characters have good reason to look for these people, in turn progressing the story, but as a player, I don’t. I’ve spent maybe 20 minutes tops with these characters before Fallout is telling me I should desperately ask anyone I can find if they’ve seen my dad/son. Frankly, I don’t care about them as much as the story wants me to, and that’s a big problem if it wants me to finish it. A longer intro where I spend more time with these characters could help, but it’s not the optimal solution for those with little patience.

To solve this dilemma, I point to the nearly perfect Fallout: New Vegas (you thought I was forgetting about it, weren’t you). New Vegas skirts around these narrative issues by making the story directly about you. Do you care about you? Do you care about tracking down the man who tied you up, shot you in the head, and buried you in a shallow grave? Chances are that you do, and this desire will carry you through until the story unravels itself, revealing that there are larger forces at play. In the next Fallout, make the story about the player, plain and simple.

As an RPG, Fallout’s primary goal should be making the player feel central to the world. The skills and the story, when done correctly, both inspire a sense of true protagonism. To me, a protagonist is a free agent. I’m moving through this world of my own volition, shaping it because I want to, not because I’m being told to. I’m engaging with what I find interesting, what I find new and exciting, not what I’m expected to. 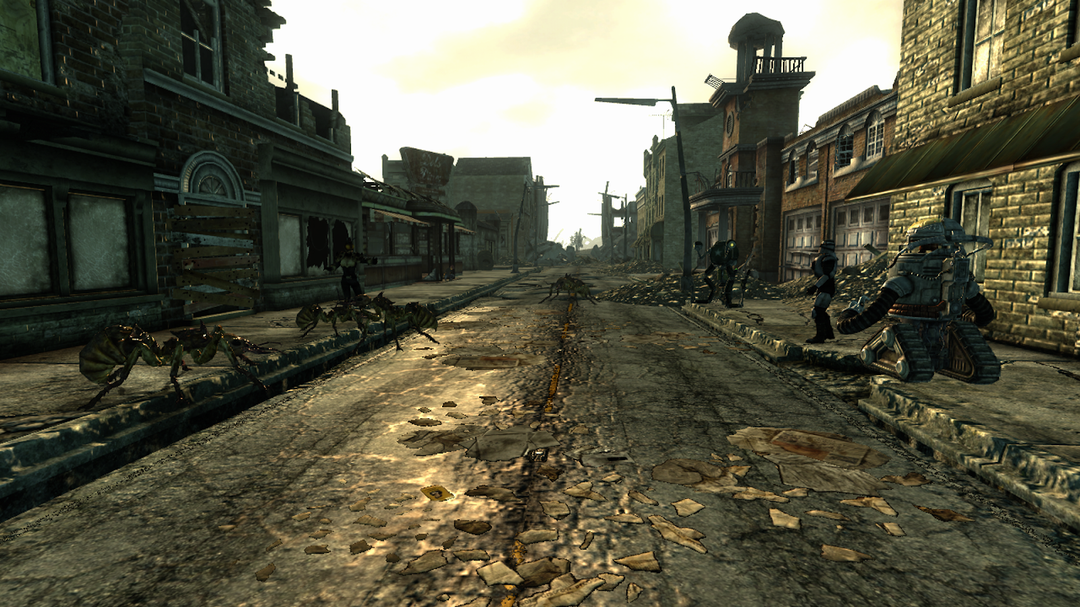 Now this is the kind of content I crave.

Fallout 3 took huge risks when it reinvented itself, and those risks paid off. Maybe I don’t need anything quite so drastic besides a change in scenery, but there’s knowledge to be gained from looking at those steps it took into a vast new wasteland of its own. I can only hope Fallout as a series takes the time to learn something from itself. And I look forward to my next adventure, wherever Fallout takes me.