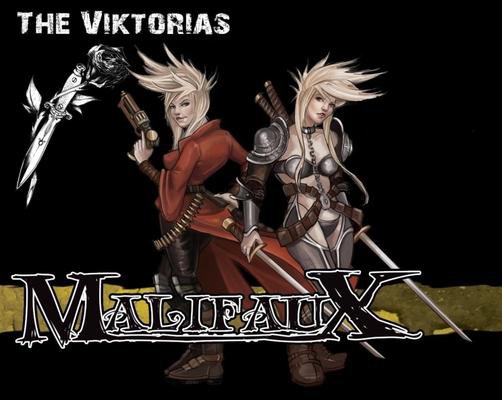 We here at Sprites and Dice have talked a bit about Malifaux before, and it's probably for good reason: Wyatt plays (and gets people addicted to) it, I play it, and so does Dana. As we’re now in the middle of Miniatures May, it seems like an excellent time to revisit the topic, and dive in a little deeper. Namely, it's time to start talking about the individual factions and why my favorite faction is better than Dana's dirty Neverborn.

Malifaux has a lot to recommend it, but I would like to focus on my personal favorite faction, the Outcasts. As the name suggests, they aren't so much a unified faction as they are the people who don’t fit in anywhere else. As a result you get a wide variety of abilities within the faction, many of which resemble what other factions like to do, but they have an Outcast flavor that’s all their own. Something you might commonly hear me say is that the Outcasts are playing a game that’s a whole lot like Malifaux, but isn't quite Malifaux. By the end of this article, you might see what I mean.

The Outcasts are not be the most powerful or most important group in Malifaux, but I think they are by far the most interesting. They aren't unified like the others, not even by a common creed; they're just the ones left on the outskirts, and are surviving regardless. Some of these crews are human mercenaries, while others, well... they've gone down a darker path.

Like I said before, there is a lot of different stuff to play with just within that one faction, so first I'll go over a bit about playstyles. You’ve got the straightforward combatants like Viktoria and Von Schill, who are most reminiscent of how the Guild operates: lots of firepower, and a mostly human element. You've got Hamelin the bringer of Plague (yes, that is supposed to be capitalized. Yes, that should scare you), summoning rats at a rate that might make Resurrectionists jealous. You've got Leveticus playing with his machines and his monsters; he would fit right in with the Arcanists, except that he’s too busy trying to solve life and death. Then you've got… whatever the hell Tara and Jack Daw are doing.

This is Tara's Nothing Beast. It's made of nothing. What you see is only what it specifically decides not to turn into nothing. It also hits harder than a mac truck.

Viktoria - My own personal favorite master, by far, is Viktoria. She and her signature henchman - who is also Viktoria - are not only wonderfully fun glass cannons, but have one of my favorite bits of flavor. One's a mercenary from Earth that carries the magical Masamune, a real-deal artifact of power. The other's a doppelganger that seems to have, shall we say, Stockholm syndrome.

The master of the crew is Viktoria of Ashes, who uses a sword and gun to devastating effect. However, she comes with Viktoria of Blood, a dual-sword wielding henchman who costs 0 soulstones to hire. Not bad, right? However, Blood can only be taken when Viktoria of Ashes is your master, or to lead a crew of her own. In most situations, what this means is that you get two models for the price of one.

Neither Ashes nor Blood alone is a match for most other masters, due to their low durability, but get the two of them together and they’re a force to be reckoned with. The Viktorias and their crew move fast, hit hard, and collapse like a house of cards. Playing them reminds me of nothing so much as a mono-red deck in Magic: Both players know that one of them is going to be dead very soon.

Leveticus - If hard-hitting brawlers aren't your style, there’s plenty more to work with here. Leveticus is tricky as hell, and most definitely in the running for the weirdest Master in Malifaux. Fortunately, he's also brutally effective. Most crews would go to great length to protect their masters, but this crew thrives on getting Leveticus killed. Levi's favorite thing to do is to sacrifice his own Wounds to make his attacks stronger, die in combat, then come back at the end of the turn. If your master is dying every single turn, and constantly summoning new half-undead constructs while he's doing it, then you're playing this crew correctly. Leveticus is an Outcast master who makes Ressurectionists wonder what they're doing with their unlives; after all, most Resser masters thrive on raising and reviving minions. This guy revives himself like it's child's play.

Mixing Undeath with machines - what could go wrong?

A head's up: this crew definitely takes some practice, as you have to set up for your Master coming back to life with models and spells in the right place. He's complicated sure, but once you get him going the right way, he makes people run for the hills. Also a bonus? He's creepy as hell, and his models definitely have a wow factor if you paint them up right.

Von Schill - No article about the Outcasts would be complete without this crazy German bastard. Von Schill leads a squad of elite mercenaries called the Freikorps, and they are so good at what they do that they've managed to make a name for themselves in an insane world of monsters, magic, and the imposing Guild. Mechanically, the Freikorps are well-rounded units with a slight emphasis on durability. Most of the Freikorps benefit from Armor and have high Df and Wp stats, enabling them to take whatever the enemy can dish out. That, combined with their powerful guns and synergistic playstyle, stand them in good stead to take on anything in Malifaux. Von Schill himself is a monster in combat, toting a gun and combat knife that can threaten even the scariest Masters. Those combined with his jetpack - which lets him freely move around and escape combat - turn this average Joe into a powerful and frustrating opponent. 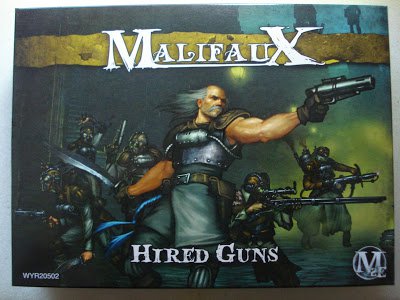 Von Schill and the Freikorps. I can only hope that I'm a quarter this badass when I'm his age.

For Fame and Profit Aside from the wide variety of play-styles described above, I also appreciate the Outcasts because they make it fairly easy to branch out into other factions, making it a great faction to dabble in. Quite a few of the Outcasts have the Mercenary trait, meaning it allows them to be hired by other factions. Branching into a new faction doesn't necessarily mean abandoning your Outcasts, and many people will tell you they have a particular unique model they love to take with them in every crew they can. This means that if you’re looking into, say, a Guild crew, but you decide that you want Taelor’s ridiculous hammer and anti-summoner "Welcome to Malifaux!" ability on your side, you can still hire her for one extra Soulstone.

Another thing I really like about the Outcasts is the fluff; their back-stories, and how they fit in to the world. Again, the Outcasts are by no means a unified faction, so many of the masters’ stories aren't even connected. Rather, it’s all about each of them doing their own thing and making their own way. Viktoria and Von Schill each lead their own crews of mercenaries, and their skills are known throughout Malifaux; it’s particularly impressive that they’re making names for themselves without the vast resources of the Guild, or the crazy magic available to other factions. Hamelin, on the other hand, is possessed by an unbelievably powerful entity called Plague, which works through him to conquer Malifaux, killing and spreading disease as far as he can. Tara has a small fraction of a similar creature called Obliteration embedded within her, though she appears to be in control. Jack Daw… well, if we ever figure out what’s up with that guy, we’ll know a whole lot more about Malifaux as a whole.

Jack Daw's box set. They were executed in various ways, and they make you feel so bad about it that you die too.

I will admit that I’m a bit biased toward Viktoria and Von Schill because of how well they worked together in the first edition of Malifaux. Before the second edition was released, Von Schill used to be a henchman, still making a name for himself. Bringing the gun-toting German alongside the Viktorias was a lot of fun that's no longer possible, but that's what edition changes do sometimes. Fortunately, both crews work great on their own, and I've grown to like both of them for their very different play-styles. A basic rule of thumb: the more human the crew in the Outcasts, the easier they are to wrap your head around as a new player. The more inhuman and bizarre, the more complicated the rule-set gets. All of them are fun, but for new players, I would certainly try out the Viktorias or Von Schill first before figuring out how to handle all of Hamelin's rats.

Even without that little bit of absurdity, the reason I like the Outcasts so much boils down to one thing: They’re just fun. What better reason could there be? I started out as a Neverborn player, and more recently I've branched out into Ten Thunders and a little into Guild, but the Outcasts’ play-styles, stories, and their easy mix-and-matchability keep me coming back. The whole world might be against them, but damn if they aren't going to go out fighting.

What’s your favorite faction? Favorite master? Hit me up on Twitter @Eric_P_Henn and tell me why you think your imaginary friend could beat up my imaginary friend. While you’re at it, please consider donating to Sprites and Dice’s Patreon. We’re looking into attending several more conventions in 2015, and as much as we might want them to, those things don’t pay for themselves.