“May You Live In Interesting Times”

(Author’s note: The following is an in-character recap of the events of my last Pathfinder session. It’s my first time GMing, and this is the first in a series of articles I will be writing about the experience. If you’re not interested in short Pathfinder fics, then this is not for you.)

My name is Maximilian D’Ambrosio. I’m the guild master (GM) of Dragon Wing, one of the largest adventurer’s guilds in the kingdom of Azalea. We’re located in the business district of Amaranth, Azalea’s capital. I recently inherited the guild from its former master, Rickart Strang. Things are starting to get… well, interesting, so I’ve decided to keep a diary journal just in case something should happen to me.

I’m new to all of this, and while a lot of it is about what I expected, there are some things I didn’t anticipate. Like the questions. People ask a lot of questions. For the love and beauty of Corellon, I don’t just know Azalea’s population off the top of my head! Although, given my new role, maybe I should. 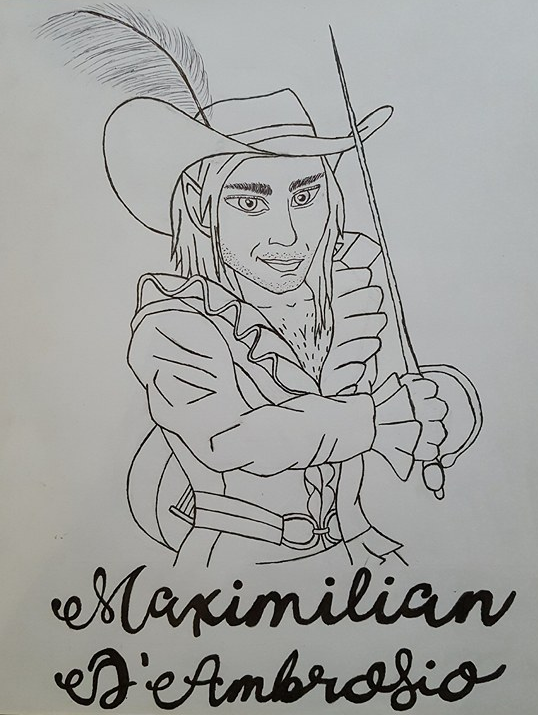 Anyway, a few days ago Dragon Wing got some new members, the first ones since I took over.

Norben is a strange fellow, not to mention a downright scrawny one. I doubt he’ll be much good in combat, but the others say he has other skills that will make him an asset. It’s true that not everything we do requires fighting, so he should be able to pull his weight.

Norben said he used to be a thief, which worries me, but the others say he used to do things like steal pies off of windowsills and leave money for them. When someone asked why he didn’t just use the money to buy food, he said that it wasn’t enough to actually pay for the pie, but he left what he had. Overall, I’m not quite sure what to make of him, so I guess we’ll have to wait and see what he does.

Osanna is another odd one: A human raised by dwarves. She ties her hair in a braid over her face to emulate a dwarf’s beard, which looks kind of silly, though she’s rather fetching otherwise (and now I’d better hope that Lily never reads this).

More to the point, Osanna has a musket and knows how to use it. Guns aren’t exactly unheard of anymore, but it’s still pretty strange to see somebody walking around with one slung across her back (although this one seems to be held together with spit and prayers). The others have said that the gun is very, very loud, and tends to deafen anyone who’s standing too close when she fires. Still, it gets the job done, and that’s all a guild master can ask for.

And then there’s Koil, the elf summoner. If he can manage to summon his head out of his arse, he’ll be a fine addition to the guild. He has an eidolon named Sleipnir, an eight-legged spirit horse that stands about as tall as a man. Of course, I didn’t know that at first. When I asked Koil what abilities he brought to the table, he called in Sleipnir to tear up Dragon Wing’s common area. He’s lucky the beast didn’t get shot down on the spot. I’ll bet Rickart never had to deal with this kind of nonsense.

Of course, even if Sleipnir had been destroyed, it would have come back in a day or so. That’s the beauty of summoners. I’ll put some eidolon or any summoned monster on the front lines, in place of a guild mate, any day.

These three showed up out of the blue and said they wanted to join the guild. So, I did what Rickart always used to do with new arrivals: found the easiest job request we had, and sent them out along with a guild mate to see how they’d handle it. The request was to go to a nearby town called Greensfeld, where a local hunter claimed to have seen a zombie shambling around the woods. Greensfeld’s mayor, Mayor Berne, wanted us to search the area and destroy any undead that we found there. It’s almost unheard of for undead to be seen this far north, so far away from the Badlands, but a job is a job.

I sent Jakk with them. Jakk is a more experienced member of the guild and a cleric of Besmara, better known as the Pirate Queen. He’s got a questionable past, but as long as he acts within the law as a member of Dragon Wing, I will allow him to stay. Also, I would kill a man for that coat he wears. I told him not to interfere with the mission unless it looked like the others would get themselves killed, but figured that if there really were undead up there that the others couldn’t handle, a cleric would be the perfect one to pull them out of the fire. The agreement was that if Jakk had to intervene, the others would be considered to have failed the mission and would not be welcome in Dragon Wing.

It should have been a straightforward job, but since when does “should” matter?

On their way to Greensfeld, a bandit tried to rob them in their sleep. Koil woke up and saw the man coming, and called Sleipnir over to say hello. The sight of an eight-legged demon horse sent the bandit running. Just in case he was running to get help, rather than simply running away, Koil sent Sleipnir after him. It turns out that an eight-legged horse can run impressively quickly, so the bandit didn’t get far. A couple of bites from Sleipnir made sure that the man would never rob anyone again.

The group reached Greensfeld safely and things were going well. Norben actually did find a piece of putrefied flesh and a trail through the woods. They followed it and came upon a zombie, which they dispatched fairly easily. The zombie was in front of a large cave, which the group opted to explore.

They found a couple of skeletons inside which, again, they defeated without much trouble. Deeper in the cave they found something a bit stranger: a wooden door with a novice sorcerer defending it. Norben quickly identified the young man as a drow, better known as a dark elf. Of course, he turned out to actually be a dhampir, but points for effort.

Showing remarkable restraint, they defeated the sorcerer but left him alive and continued to the next room. That’s when things took a turn for the disturbing.

The final room of the cave contained nothing but a stone sarcophagus and a necklace with a large crystal hanging from it. The others had their suspicions of what they were looking at, and Jakk confirmed that the necklace was in fact a lich’s phylactery. The lich itself was surely inside the sarcophagus.

Blessed Corellon, a lich. I really should try to keep this professional.

Jakk insisted that they all leave the cave immediately. Osanna had the idea to use her spare gunpowder to collapse the cave’s entrance and trap the lich inside. Jakk agreed, and assisted her with a well-placed Shatter spell. Between the two of them, they managed to seal the monster behind about a ton of stone. I’m sure it will escape eventually, but Osanna’s quick thinking might have bought all of Azalea some much-needed time to deal with this threat.

They brought the sorcerer, alive but just barely, back to Greensfeld and left him with the mayor. I do not know what became of him after that.

The group told Mayor Berne what had happened (actually, they shouted it out in the middle of town; the group as a whole could use some lessons in tact). Berne, after a couple glasses of brandy, thanked them for their help and offered them a wagon to get back to Amaranth quickly, so that they could tell me about the lich and I could warn Their Majesties.

Their return trip was blessedly uneventful. I think the mission went well overall, in spite of the unexpected turn it took. One of the group did say to me that he felt that Jakk’s presence had sort of forced them into doing things a particular way, which is fair enough, I suppose. Now that they’re full and trusted members of Dragon Wing, I’ll have to make sure to give them freedom to act as they see fit.

Being a GM is strange. I have to find the balance between keeping things running smoothly, and keeping my guild members happy. I think that I must always keep our guild’s motto in mind: Fly Free.

Anyhow, the group reported this to me, and I reported it to Their Majesties. Then I returned and wrote this journal entry. Then it was now, and I've yet to see what happens next.

I hope you enjoyed the first entry of Maxi's Journal! Get the next entry here.