From Good To Bad, And From Bad To Worse

The Goddess is real, and she’s not just working with orcs.

I had a team go out on a mission to slay an ogre that was terrorizing a small town called Calla, attacking every few days and carrying off their animals to feed itself. It should have been simple: go to Calla, find the ogre, kill the ogre, go to the tavern to spend their earnings. What actually happened was… less straightforward.

They arrived in Calla more or less without incident. The town had clearly been under siege for some time: defenses had been raised and broken more than once. The road was blocked by wooden gates, and stout fences protected the animals’ grazing, though they didn’t seem to be doing much good. The townspeople were overjoyed to see members of Dragon Wing arrive, and eagerly pointed them to the forest northwest of town.

After a short search, the group found the ogre’s den. If the crude camp and chewed bones weren’t enough to go on, they also found the ogre - dead. It had been savaged by what appeared to be a pack of wild dogs or wolves, though some of the teeth marks had come from a larger animal, perhaps a bear. Wild animals attacking an ogre would be unusual, but not unheard of; perhaps it had wandered into their territory, or threatened their young.

A bit more scouting, and they learned that they were half-right: there was indeed a wolf pack nearby, but the most severe wounds hadn’t been caused by a bear. The leader of the pack was unnaturally large, about as big as a direwolf. Realizing that this was too much for them to handle, they retreated to make a plan.

I must give the group credit here. The terms of their contract had technically been fulfilled: the ogre was dead, and they could have simply returned to Amaranth to collect their reward. However, they decided that they could not in good faith leave the town possibly at the mercy of a wild and strangely aggressive wolf pack. 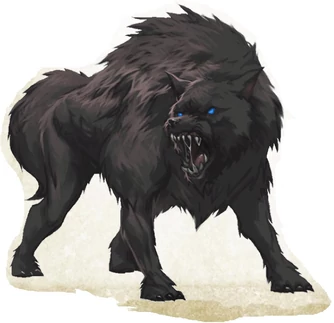 Osanna drew a rendering of the giant wolf for this journal.

The group determined that they could not deal with the entire pack on their own, so they came up with an alternate plan of attack. They returned to town and had the mayor get a group of volunteers together. The villagers would kill or drive away the normally-sized wolves, while the Dragon Wing members would deal with the big one. It was already past midday at this point, so they determined that they’d take the rest of the day off to let the villagers gather and prepare for the hunt. They went to the local inn, a small but comfortable little place, to eat and rest.

The next morning they went out with roughly twenty villagers to drive out the wolves. The wolves - apparently driven by the leader - fought to the last, which is very unusual behavior. Usually wild animals will run when things turn bad. Nonetheless, the plan went off flawlessly. To everyone’s surprise, the villagers actually defeated the wolves. Several of the townspeople were badly injured in the fight, but nobody died at all. Those who were hurt were able to be healed once the battle was over, with no lasting damage done.

The leader itself put up a very tough fight, but the group was able to defeat it - barely. However, the real problem came when they examined its body. They found a small gem shard embedded in the wolf’s chest, which they brought back to me. I suspect that it was that so-called Goddess’s work. Apparently she can empower wild animals as well as orcs (although, granted, sometimes the line between the two is a bit blurred).

Who is she, and just what is she up to? We can only bide our time at present, hoping for more clues to cross our path.

Still, on the whole this was a great showing by my guild members. As their GM, I find myself inspired by their commitment to doing the right thing, as well as their ability to plan ahead and think on their feet. If everyone (myself included) does as much, I see no reason we can’t get through whatever trials lie ahead.