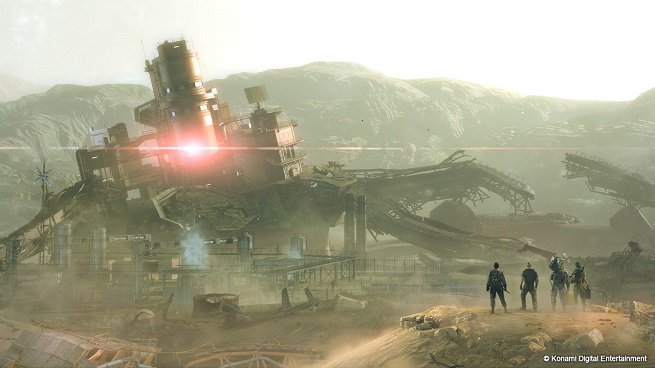 I don’t think Metal Gear Survive is a very good game. I haven’t played it, not directly. I've watched friends, and that's been more than enough for me. Maybe that discounts me from being able to make certain judgements about it, but the quality of a video game is determined by more than how it plays. I can’t speak to the controls directly, but what I can speak about is my frustration about how this game has attached itself to a franchise beloved for its heart.

Here’s my review that’s not a review: Survive sucks. But more than just sucking, Survive is maddening just because it even exists.

The animosity between Konami and the lead mind behind the Metal Gear franchise, Hideo Kojima, has been well documented. Survive is the first attempt to create Kojima’s brainchild without him and it shows. It lacks everything that’s given the series its patented aura: no short films to split up gameplay, no impossibly convoluted plot, and no real standout characters. The only thing that remains is its ability to make us ask “what?” over and over again. Except this time, there’s no love. 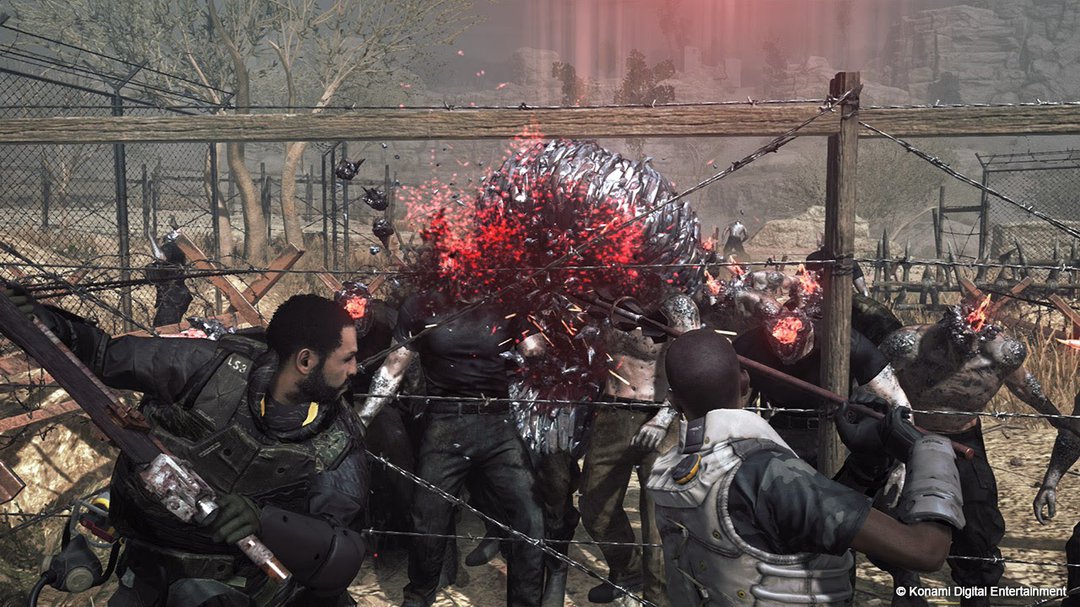 Stabbing crystal zombies through fences is the name of the game. Sound like fun?

None of those qualities may sound good on paper, but Metal Gear had this indescribable charm impossible to understand until you saw it for yourself. You either understood the appeal of the franchise, or you didn't. Now though, the heart has been sucked away from the series: from its repetitiveness to its overbearing hunger, thirst, and stamina meters, all the way down to its thick smear of microtransactions, Survive is utterly devoid of charm. I choose to call it Survive because that’s just about all this is; there is no Metal Gear to be found.

To be fair, I would have no interest even if Survive had nothing to do with the Metal Gear series, because it’s just not my kind of game. I find it annoying having to collect mushrooms and sharpen your weapon in Monster Hunter: World, and that game gives you a way to do that infinitely from the get-go. A game modeled entirely around draining meters, collecting items to prevent said draining meters, and crafting pointy sticks is just not my cup of tea. If anything it’s more like a cup of dirty water that makes me throw up every 30 seconds. It's something you should keep in mind while reading this - if you are a fan of survival games like Project: Zomboid, maybe you'll find something here I missed.

At the same time, I normally don’t have a problem with microtransactions in games. In what I've played, I’ve always found them pretty easy to ignore as long as they don’t gate off anything too integral. Metal Gear Survive forces me to take issue here though, thanks to how many there are, and how they do wall off content such as extra character slots. The real problem however with both of these things is that they emblematize a greater sin this game commits by even existing.

Snakes In A Game Company

Kojima is one of the first game developers that is known just by their quirky style, their individual flare that shines through into their games. This is why Metal Gear Survive is so horrific: the artist has been tossed to the side and his creation has been seized. The greedy corporation he worked for recognizes how beloved his creations are. But wait, they take so much time, effort, and money to create. Surely whatever makes them successful can be recreated for a fraction of these resources. So the corporation sends whatever of the artists’ partners remain to recreate the magic. The style is easily copied, but the focus shifts. Whatever artistic endeavour laid at the focal point before is now profit. Pure, unadulterated, maximized profit. Is it any surprise that the product only briefly resembles its predecessors on the surface? 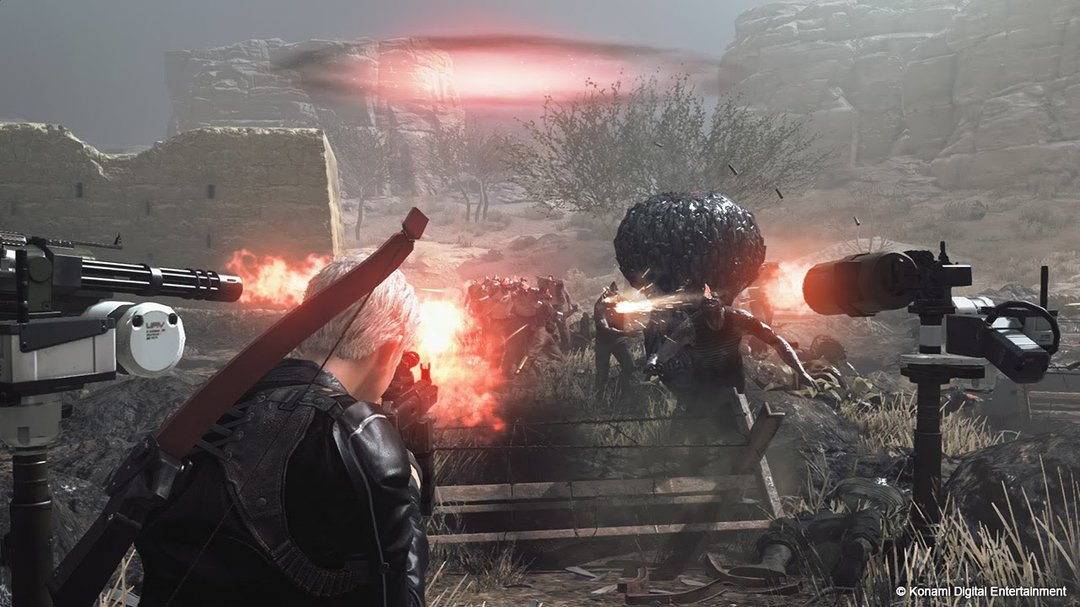 The entire premise of Survive is exploring where the wormholes from The Phantom Pain lead.

Survive didn’t have to be a traditional Metal Gear game to be good. It could have been a great survival game; it didn’t even have to incorporate stealth mechanics. What it did need however, was for someone to care. Konami made it brazenly clear that unless it came to making as much money as possible with this product, they didn’t.

It is redundant to say that a company’s main priority is making money, and most times, I understand that motive: I don’t think there are many exceptions for the most part, if any. But at least most companies pretend that they have other priorities. Most companies have mission statements to prove that they have close seconds.

Konami showed that its second biggest priority is miles behind its first. After the great P.T. debacle, their plans to break away from larger projects became more obvious with time; the payoff simply wasn’t worth the investment anymore. Cheaper games that made more money relative to their cost became the focus. There’s no way a Metal Gear game could thrive under this mindset, regardless of its genre. This game was dead before it was ever put on shelves. 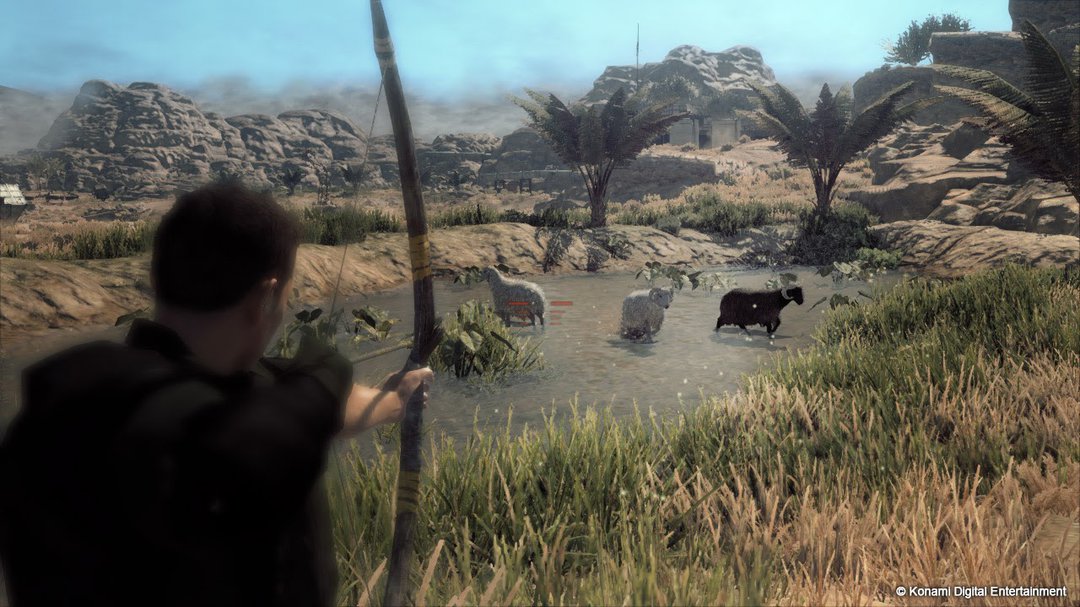 Much of the game is spent just managing your depleting health and stamina bars, rather than enjoying the thrill of survival.

“Why was this even made? Nobody asked for this. Who was this made for?” The outpour of questions at Survive’s announcement made it clear that consumers had no idea why this was happening. However, Konami’s train of thought seems pretty easy to follow:

Fans would want another Metal Gear game, especially thinking that The Phantom Pain was the last installment.

There are plenty of assets left over from The Phantom Pain, so it wouldn’t be that expensive.

Who doesn’t love the Fox Engine?

Despite this surefire logic, Survive is maddening in every sense of the word. It’s confusing yet unsurprising, infuriating yet apathy inducing. Even its creators couldn’t help feeling a little...mad. Game franchises with dozens of sequels have more heart than this game, and it all comes back to how Konami made it clear they are shooting for padding their bottom line more than making a good product.

I’d be curious to know who thinks Survive existing is a good thing and what kind of person they are. Maybe, just maybe, it takes madness to appreciate madness.