PAX East 2013:
Delver's Drop will steal hours of my life away 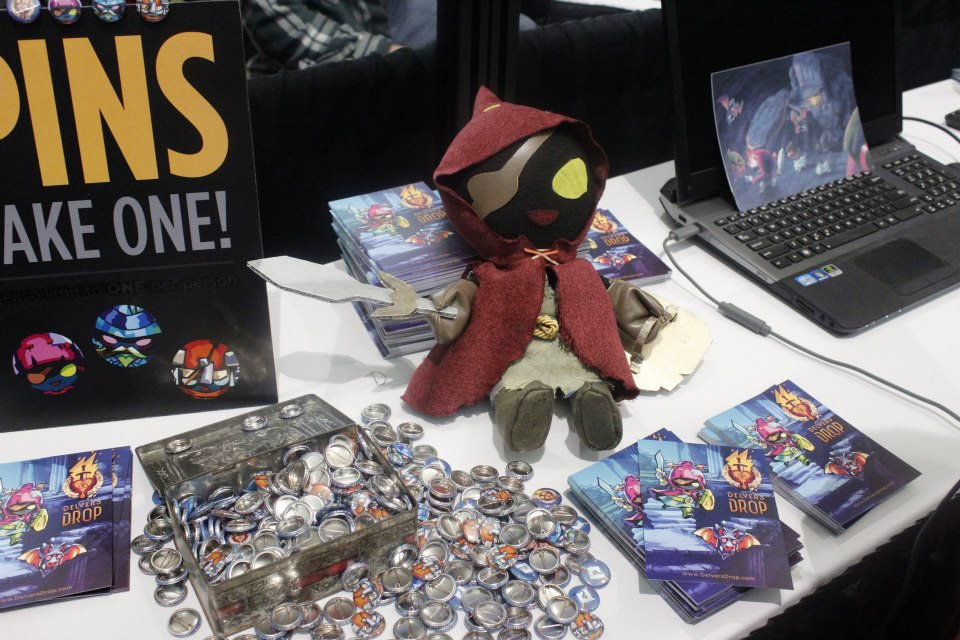 It feels like difficulty is making a comeback these days. Games like The Binding of Isaac and Organ Trail are putting the pressure on players to keep closer track of their resources, question when to take risks, and expect death at every corner. Pixelscopic's Delver's Drop is shaping up to be exactly like that, and I love it for it.

Delver's Drop is a game that is still very much in development, but what it had to show at PAX was a lot of fun on its own. The demo was a simple "Endless Drop" mode, where the goal was to pass as many floors as possible before meeting your inevitable demise. Each floor is a single room, and the hole to the next room will open after either pushing a switch or killing all the enemies on the floor. Sometimes the switch will need to be turned on by way of a physics based puzzle, other times the player will have to fight through large amounts of enemies and death traps to get to the switch. All of these rooms come in randomized order, so each run will be unique.

Right off the bat, I think this game is gorgeous. The limited color palette of blues, purples, and oranges really make everything pop, and all of it is accentuated by the dynamic lighting system in place. Every light source casts its own shadow on the player, as well as the enemies. Some enemies even give off a little light of their own, the example in this demo being the ghosts and the low glow of blue they emit as they travel around the room. Even their website gives this vibe, showing off that same awesome color palette and design. Everything about this game is just friggin' pretty. 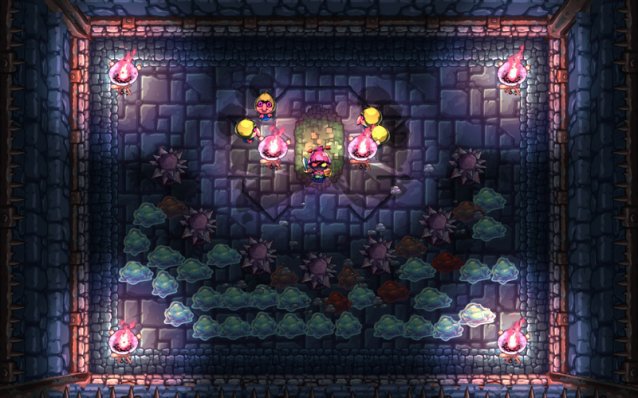 Note all the different shadows going on here.

The physics in this game are really unique, and actually play a big part in the gameplay itself. The Rogue, which was the character available to play as in the demo, kind of glides around as they walk. Tight turns are more like drifts, making avoiding certain enemies and obstacles slightly difficult. However, this is intentional. All objects in this game have their own coefficient of friction, which can lead to some interesting situations. For example, there are slime-like enemies that have practically zero friction when hit, and when combined with two large springs on either end of a room, will bounce back and forth endlessly. One of the rooms I encountered featured almost nothing but springs and slimes, and running to the switch and back was somewhat of a nerve racking experience.

One wrong swing of the sword and this can go very badly.

Difficulty was definitely apparent here, because word was the average amount of floors players made was around 6. The game can be pretty unforgiving. Some enemies explode after you kill them, some teleport around the room and fire at you from a distance, and like I said, some fly all over the place willy-nilly if you hit them in the wrong direction. Some puzzles can be unsolvable if you accidentally knock a box into an endless abyss. Also, there are turrets that can kill you in one or two hits. Even after dying suddenly in the middle of a really good run, I didn't want to put the controller down. At least in Endless Mode, games are so short that the feeling of "just one more" can't be helped.

I've seen a lot of comparisons of this game to The Binding of Isaac, and as an obsessive Isaac player, I can see myself liking this game more. Deaths and misfortunes don't feel as random as they do in Isaac. Sure, floors and items are randomized, but gameplay feels precise. Every time I died it felt like my fault. My response wasn't fast enough, I was too eager to run past a turret, I missed my target. Never did I feel like the game flat out killed me and told me to try again, and I like that. I felt like I was building skills, not rolling a roulette wheel. 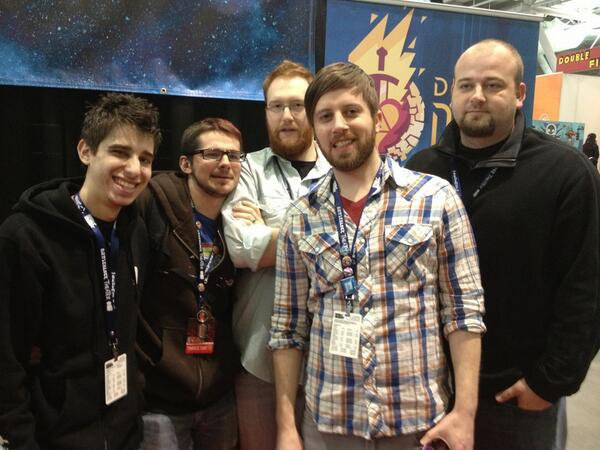 The guys of Pixelscopic, my friend Justin, and I.

As for the booth itself, I had an awesome time just hanging out there. The developers really sounded excited about their work, and I was genuinely interested to hear their thought process about each piece fitting together. I also kept coming back to check up on my high score of 23 floors, which happened to be the top score of the show. This is where I'm gonna nerd out a bit, because I was actually mentioned on their Kickstarter page for this. Also, they signed three of their cards for my friends and I, and I personally think it's one of the coolest bits of swag I grabbed all weekend. 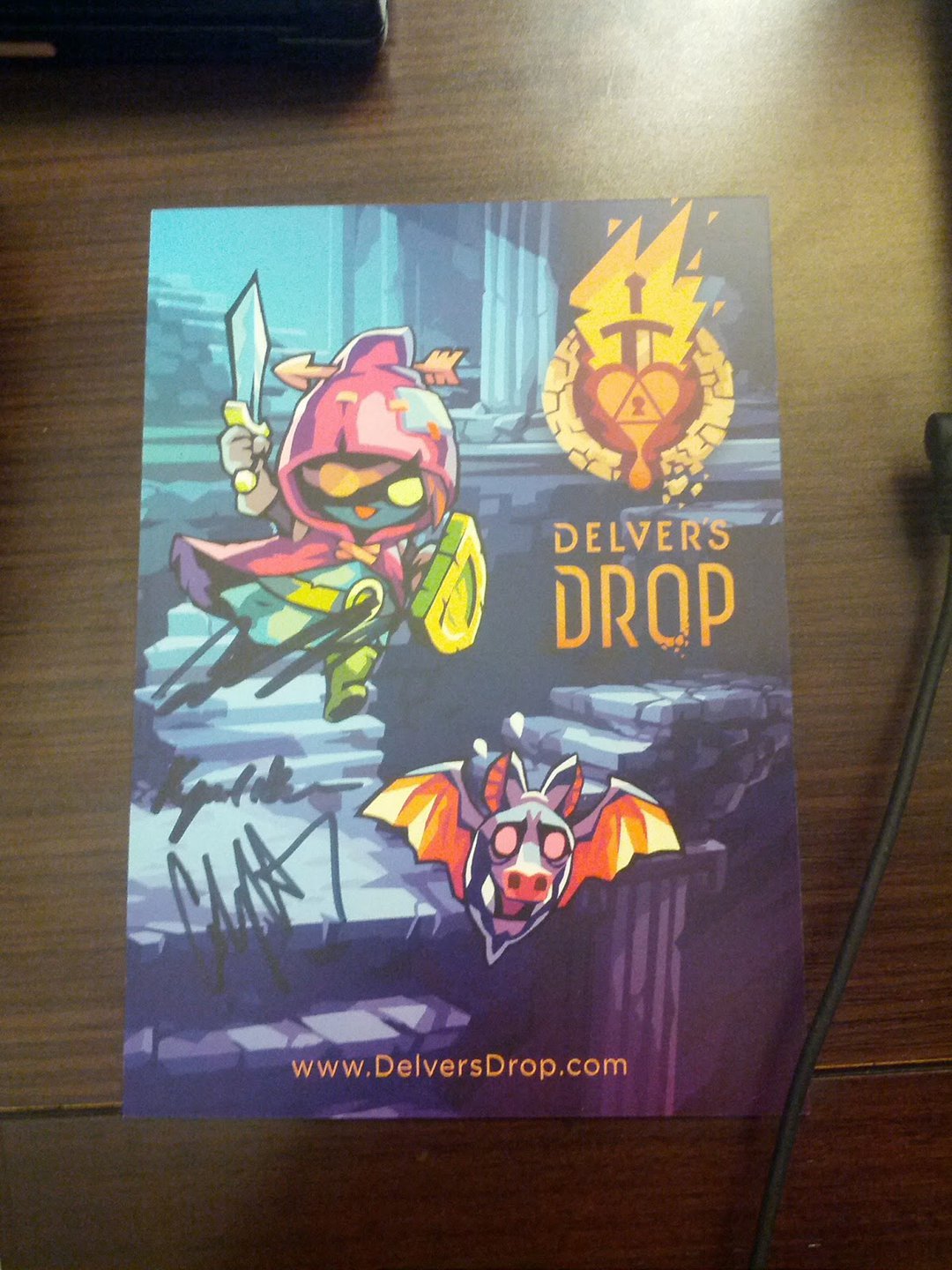 Delver's Drop recently had a successful Kickstarter, reaching 200% of their funding goal, and even extended the benefits of their Kickstarter to anyone who wanted to contribute for a short while afterwards. Anyone interested can still vote for them on Steam Greenlight. The game will release on PC/Mac/Linux this October, and Android/iOS/Ouya around February of next year. I'd love to see this game sell well enough that some of the stretch goals, like the console release, will be feasible.

The alpha for contributors and backers is coming in a few months, so be sure to see a post about it from me then!