A Tale Of Two Games

Coming Into Board Games As A Video Gamer 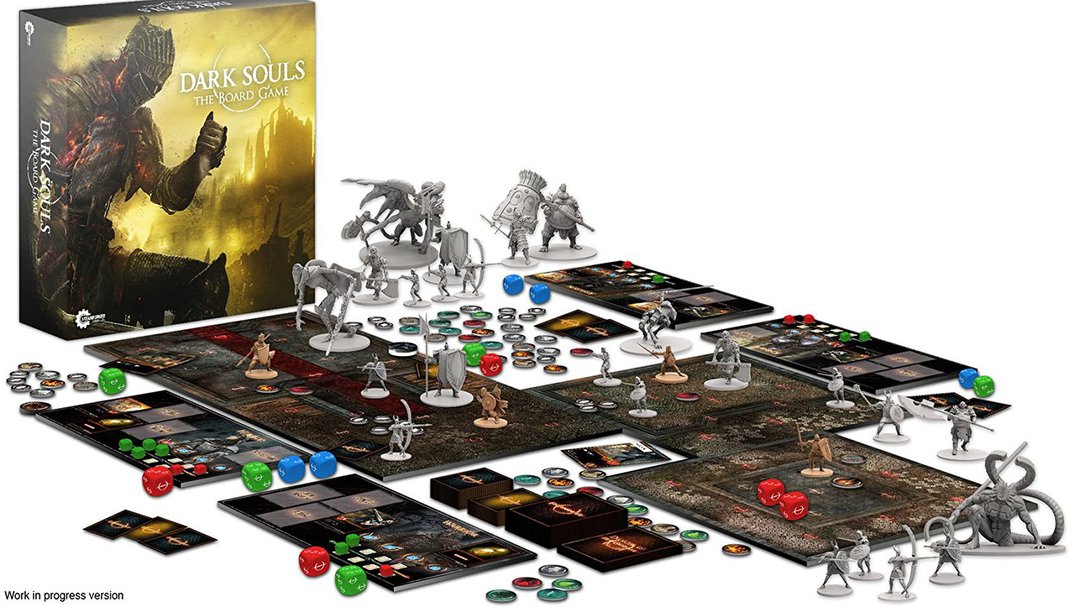 In keeping with our monthly theme, it might seem like madness to go from a world of video games to the analog world of board games. But that's exactly what Otto does here, sharing some of his tips for those of you who might be looking to cross worlds yourselves.

I’ve been playing games for most of my life. At least, I’ve been playing video games for that long. It’s only recently that I’ve remembered to include board games in my definition of “gaming.” That’s one of the two things I’ve learned about myself since starting to work here with the colorful cast of Sprites & Dice. The other thing I’ve learned? I’m absolutely terrible at board games.

Okay, maybe I’m being a bit too harsh on myself. I’m not terrible per-say. I can still get into a game, get a grip on the rules of it and play to a decent standard, but compared to the board game veterans that I’ve been going up against, it’s almost no contest. They’ve been playing games like these for years and I’m only in my first months. Yet, the board game world is lush and worthy of your attention. So if you’re like me, wondering what’s beyond the screens we’re used to, getting into board games with some pros after playing video games, here are some tips for you! 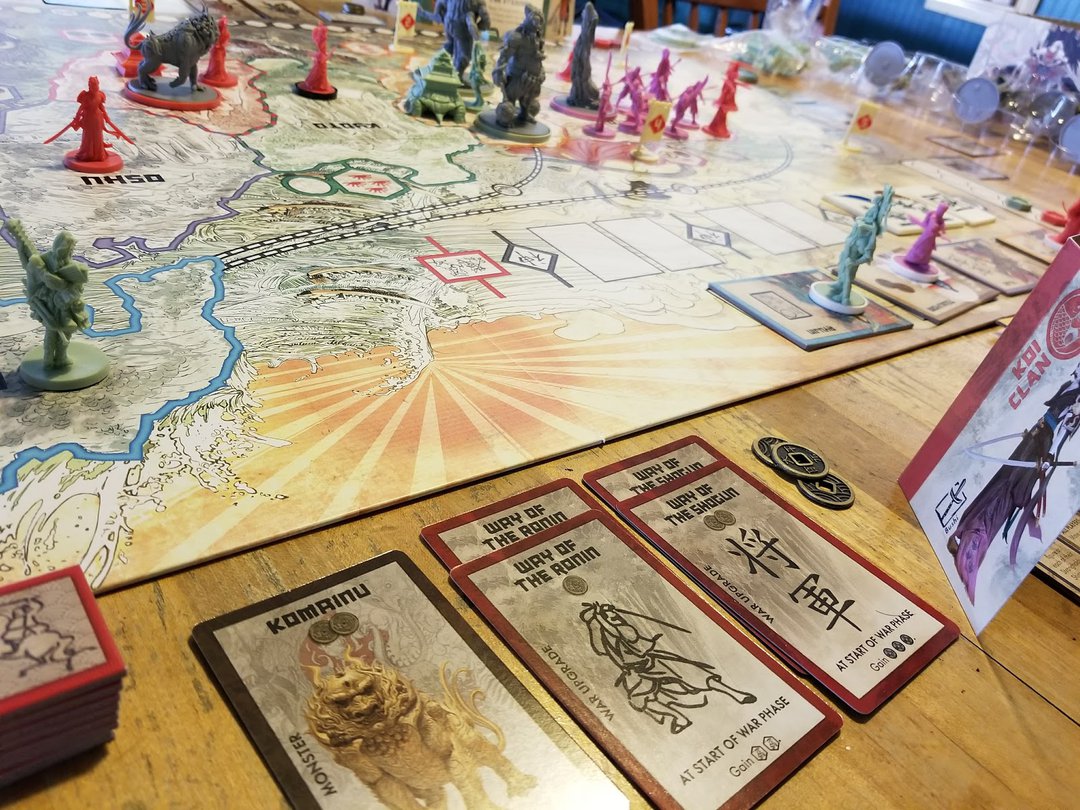 The game board is vastly different from looking at a screen. Be sure to look carefully and plan ahead!

Firstly, and maybe most importantly, if you’re switching from video games to board games you need to have patience. Board games can feel like they’re going on forever compared to video games, but that’s not to say those two to four hours aren’t exciting. Take for example the last game I played of Twilight Imperium 4th Edition (a long game, even by board game standards). In total we had a playtime of about five hours, full of constructing a fleet of space-faring ships, conquering planets and dealing in very nearly corrupt politics. Even when it’s not your turn, there’s something happening on the board that keeps the game interesting. When a long game like this starts coming to a close and you feel like you might win, it’s like beating Ornstein and Smough in Dark Souls for the first time again, a massive victory in the face of a mountain sized challenge. But even if you’re not in the running for a win, you can get some satisfaction by causing as much havoc and mayhem as possible for those that are.

At least, that’s my strategy. 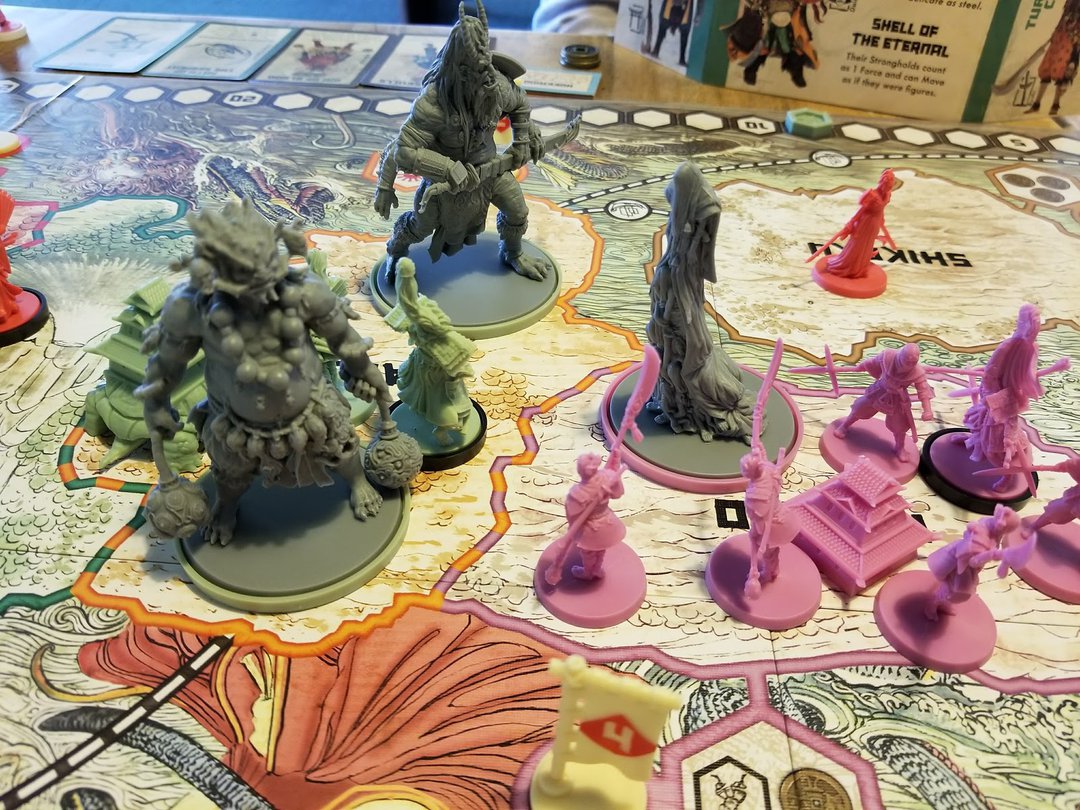 I was too patient with my clan of purple warriors, and now we’re trapped!

While staying patient is important, you can’t just sit patiently for the whole of a game. You need to look for an opportunity to strike, to make your move, and for that you need to plan in the long-term. Yeah, I know “long-term planning” is something you’d hear about in regards to finances but bear with me. Planning for the long term in a board game is in parallel with how well you grasp the working of that game, and as such it’s something my coworkers have long since mastered. For example, in one of the games of Rising Sun (featured above) I played with the Sprites & Dice crew, our editor Adam on the Koi faction which can turn money into military force. Knowing this, he quickly began gathering everything he could that would give him more money. By the end of the game, Adam was making more money than any of us other players, and was a force to be reckoned with despite having a small footprint on the game board. For people coming straight from video games and fast-paced action, it may be hard to play this long-term game. It’s all worth it when a plan you’ve been working on since the start of a game pays off, though. It’s a kind of gratification that is a far cry from the immediate feeling that you can get from games such as, well Far C-- X-COM.

You don’t really think I’d compare Far Cry just for a pun, do you?

If you’re coming to board games straight from video games, chances are you’ll be unfamiliar with everything going on, especially if the board game is complex, with figures and tokens galore. If you’re playing something for the first time, consider watching and learning. Of course, you can still play the game, but watch what your (assumedly more knowledgeable) opponents are doing. Watch how they play the game and put your own spin on it. If someone is doing something that you’re not doing, well, why aren’t you doing it? This advice comes from my very first game of Twilight Imperium IV, where I researched nearly no technology by the end of the game. Board games are enormous and varied, and unlike video games there aren’t any pop up tutorials, just a rule book. So take your time, watch how others play and adapt your style. 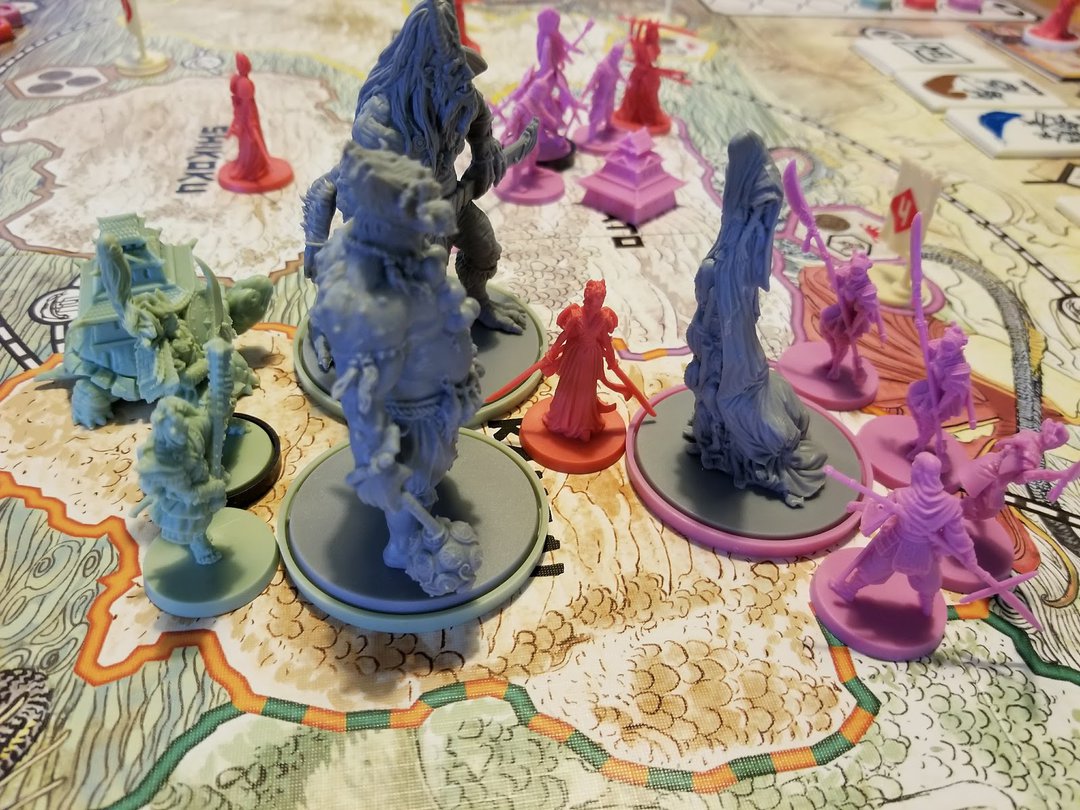 Imagine this battle from the perspective of the lone red warrior and you’ll understand why imagination is so important.

Lastly, and maybe the most important piece of advice I can give, is to use your imagination. When you’re playing video games, nothing is left to the imagination, it’s all there for you on the screen. Of course, it’s radically different when you’re playing board games with figures and cards, but it doesn’t have to be. I’m going to reference Rising Sun again, partly because it has figures, partly because they’re some of the best figures I’ve ever seen. You can purchase Oni, terrible enormous demons, to fight as part of your army. As such, they have their own figures that tower over all others on the board. Use your imagination, and that figurine becomes much more than an impressive piece of plastic, it becomes a behemoth, towering over the Bushi and Ronin fighting below. It’s similar to what’s required for a fulfilling game of D&D, you need to be able to immerse yourself in the game a little, get into it, get into the universe, and you’ll understand why so much detail is put into board games.

I’m still figuring out board games myself, since they’re an enormous and varied genre. They’re not as easy to pick up as video games are, where a majority of first person shooters play essentially the same for example, but they’re just as rewarding. So remember, if you’re putting down the controller and picking up some dice or cards, be patient, pay attention, keep your imagination handy, and of course have fun.

As we at Sprites & Dice say: life’s short, so play good games.