Why I Play Netrunner (And You Should Too)

Tournaments and Competitive Play as a Fun Challenge 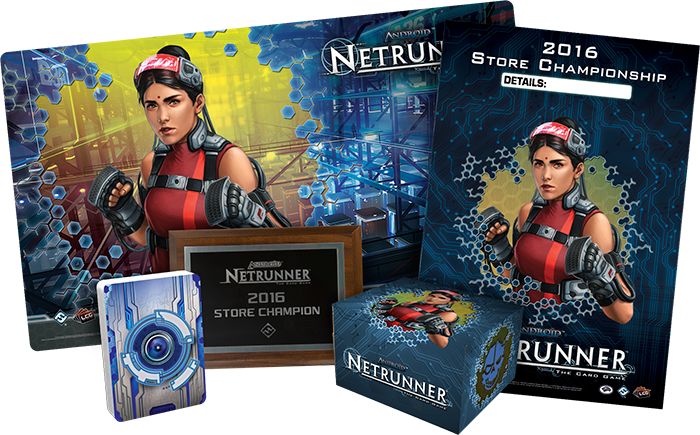 I recently participated in my second ever store championship, a brutal, competitive event lasting the better part of a Saturday afternoon. I've also been talking a lot to one of my Netrunner playing friends who's been a bit disillusioned with the game. These two events might seem to be at odds with each other, but collectively they've had me thinking why I consider this game to be the best of its kind at what it does. I've been musing why it is that I choose to pay for pack after pack, obsessive about collecting everything that's been printed, and play in a system where, as my friend puts it, you have to stop the other guy from having fun if you want to win. If you'll indulge me for a bit, I'd like to take the chance to tell you why I play Netrunner, and perhaps why you should too.

As some history, if you're not familiar with Netrunner you can find an article by Wyatt here. You can also check out a piece I wrote last year about getting outside your comfort zone with Netrunner. We've talked about why the game is great, and how it helps bring people together, but now it's time to talk about what happens as you really dig in deep; that dangerous step between casual, fun play to competitive, no-holds-barred dirty trick tournaments.

I'm going to start off by saying that my preferred corporation is the clone-loving zaibatsu, Jinteki. I love the Japanese theme of the ICE, the zen aesthetic of the assets, and the implication that if you hack our serene servers we will fry your synapses through your neural jack. Gomenasai! However, my relationship with Jinteki has always been one of love/hate. I love the feel of those tricky red cards, but they hate to work for me as I intend. It's been an on-again-off-again ordeal with me cycling back to Jinteki after stints with other corporations, only to move away from it again following failed build after failed build. This was the year I said enough was enough. I was going to stick with Jinteki if it killed me (yes, I'm aware of the irony there), and I was going to polish a deck of my own making in time for a store championship level tournament. I was going to be serious, bring something serious, for a serious competition. 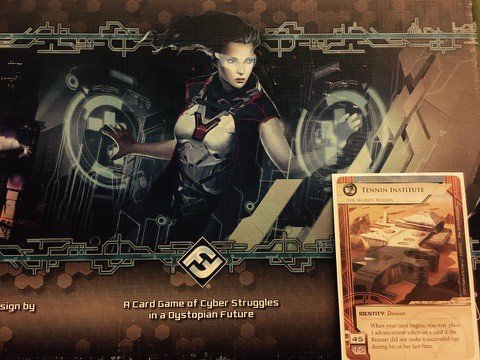 The Tennin Institute, an ID widely regarded as a gimmick. Now, it's the terror of my local meta, if I do say so myself. And I do.

I'll cut out the boring parts. After several iterations, play sessions, and tweaks, I had honed what I believed could be the next great thing for the Jinteki corporation (link at the bottom of the article if you'd like the build). I eagerly took it to the store championships nearest to me, alongside a runner deck I'd pulled off the web, and engaged in some serious matches with some friendly but equally serious folks. While my runner deck prevented me from climbing to the top table, a hindrance I'd accepted before leaving home (I'd put all my time into my corp), the Jinteki deck I was there to test only dropped one game the entire day (including my post-match casual game). I considered this a successful run, despite my middling rank in the tournament ladder, an acknowledgment of my ideas and the hard work put in to see them through to fruition.

Where am I going with all of this? Well, it's related to my friend's statement from the opening of this article. The part where he said that winning in Netrunner is an exercise is stopping your opponent from having fun. Yes, I suppose I may have given rise to a new form of fun police deck. I'll explain. You see, the basic mechanic in Netrunner is a cat and mouse game of ICE versus icebreakers. Corporations laying down defensive programs and the runners using their own programs to smash through them. I wanted to build a deck that ignored the metagame completely; I wanted to build a deck that could respond equally well to any type of opponent with any kind of play strategy. I actually tend to think this way in many games I play so this focus was nothing new for me. I finally settled on a build that could proactively trash a runner's programs. No programs, no running. No running, no scoring by my opponent. Lock them out and win at my leisure. To my delight at the tournament, I pulled this strategy off again and again, crushing rig after rig and opponents along with them. A fun police crackdown. 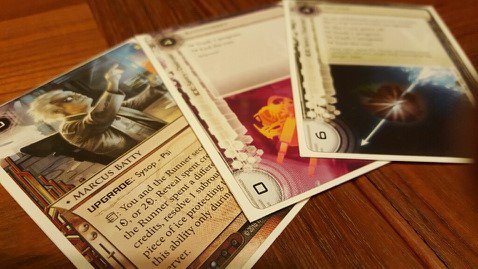 Unless you're in my head, I'll outfox you in the psi game. Can you read my mind?

This is where the collective fun should have stopped, but it didn't. In fact, I faced smiles across my tables and shook hands with many opponents who all said the same thing. “That was a great game.” “I really like your deck.” I even had a guy recognize me on Reddit, after posting my deck to the community at large, who said he'd had a great time facing me in the third round. These were people whose runners I'd completely shut down. They'd stalled out in our matches, a look I've become familiar with across their faces, vacant and confused on what the next best action should be, because they've never faced a strategy like this and because their playbook had become temporarily irrelevant. I've played this deck against my naysayer friend, and after hitting my setup once he simply scooped up his cards and conceded. Fun police. In his words, I've designed a very good deck that stops the runner, as one does in this game, and consequently stops the fun of half the game's participants. Yet that's not what I saw at my tournament; we were all there to win, sure, but in losing none of us were having any less fun.

I've been thinking on this juxtaposition ever since I came home. Why, in a tournament where the goal is to beat everyone, is winning not equated to fun? Where is the fun in Netrunner? I believe it exists in two places. Firstly, it exists in the deckbuilding aspect of the game. While you learn (and I've taught several people) I have no problem saying “Go online and find a decklist to copy and play.” It's hard for new players to both learn to play and build an effective deck. Best to learn the basics without worrying if one's deck is “bad”, but at some point, I believe you need to invent your own brand to carry with you. Netrunner is deeply personal. The struggle and loss you suffer as you start out building your own decks is a necessary part of the experience. The decks you beat someone with at a tournament or your local game night, those are an extension of you. The satisfaction you glean from playing something that you've built is the same satisfaction I think we get from building anything in a board game: you've created it. You've given it life. 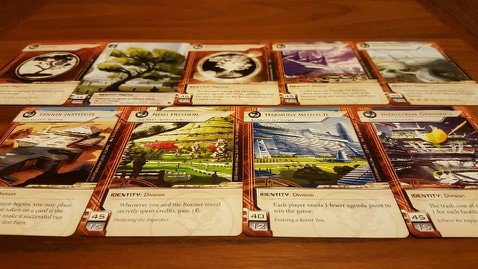 If someone stops your deck cold, maybe you haven't found the answer yet. Look at all the possible Jinteki IDs!

Secondly, I believe the fun of Netrunner comes from the dance. You and your partner are moving back and forth in choreographed motion, occasionally getting the better of one another. It's not the Aha! moment when you spring your perfect trap that the game is at its best. It's in the in-between moments, the two sides in motion looking for the tipping point at which to take the lead. Play Netrunner for long enough and you'll feel this ebb and flow. The Matrix will fade away until you see only the code. A win can be satisfying, but I take more enjoyment in simply seeing how that code flows. I think my opponents that day did, too. To continue with The Matrix parallel, it's as Trinity says: “It's the question that drives us.” Do you have an answer for this? Together, we'll see.

If you're the kind of person that enjoys building things, if you're the type of player that likes to bring a bit of themselves into the game, Netrunner might be for you. If you care less about winning and more about the crazy interactions that fire off mid-game, Netrunner is totally for you. If you don't see the other person stopping you as stopping the fun but as a challenge to be overcome—well you probably guessed it—I'll see you on the net.

Want to see the decklist I used in the tournament? Come check out Batty's Funhouse: http://netrunnerdb.com/en/decklist/31667/batty-s-funhouse

Have some personal Netrunner stories you'd like to share? Do you empathize with my friend? Just want to give me a piece of your mind? I'd love to hear it! Post comments here or visit our Facebook to keep the conversation going. And if you like our content, consider donating to our Patreon: running the net without credits is not a safe thing to do.