Ambition:
A Minuet In Power, A Preview

What Do You Desire? 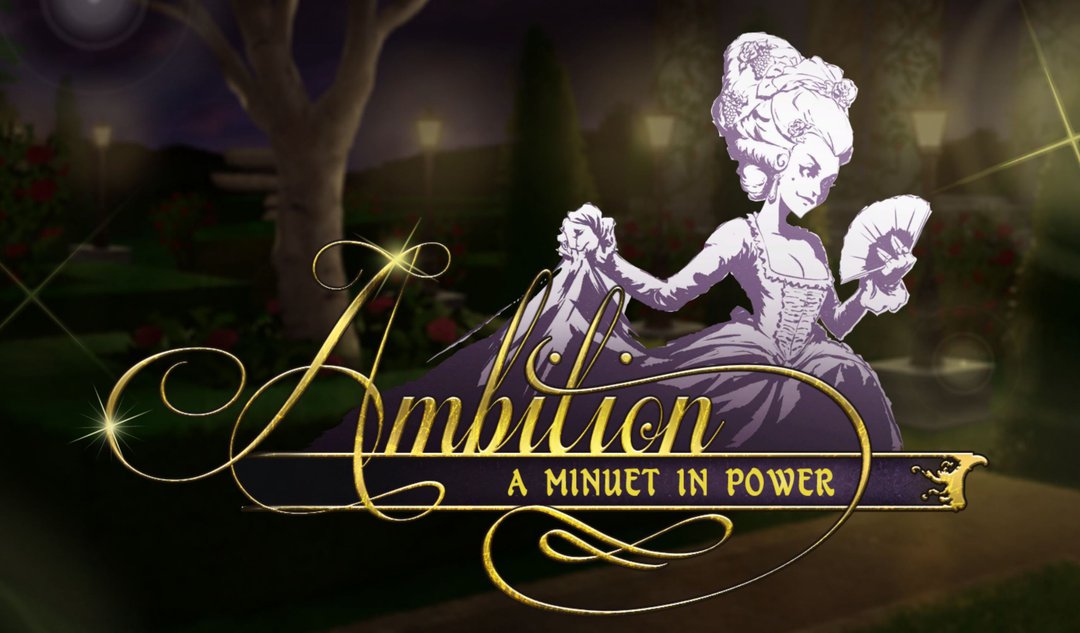 Small games with big hearts, made with love from their devs, will never stop grabbing my attention. Ambition is no exception. I don’t often do previews for games, preferring instead to wait for final releases and finished thoughts. So if you see me writing about a Kickstarter or a game to wishlist on Steam (this game being the latter), you know it’s got a certain special something that may be worth a look from you as well.

What we’ve got here today is a narrative game in which you play—well it’s not quite clear yet if it’s one or many characters in Paris during the lead-up to the French Revolution. My demo build unfortunately didn’t let me in far enough to answer that question. However, what I do know is that your decisions shift the scales of power, along with popular opinion, and determine the outcome of events that will shape the entire country. As well as your own life as the Revolution overtakes France. Let’s have a quick peek! 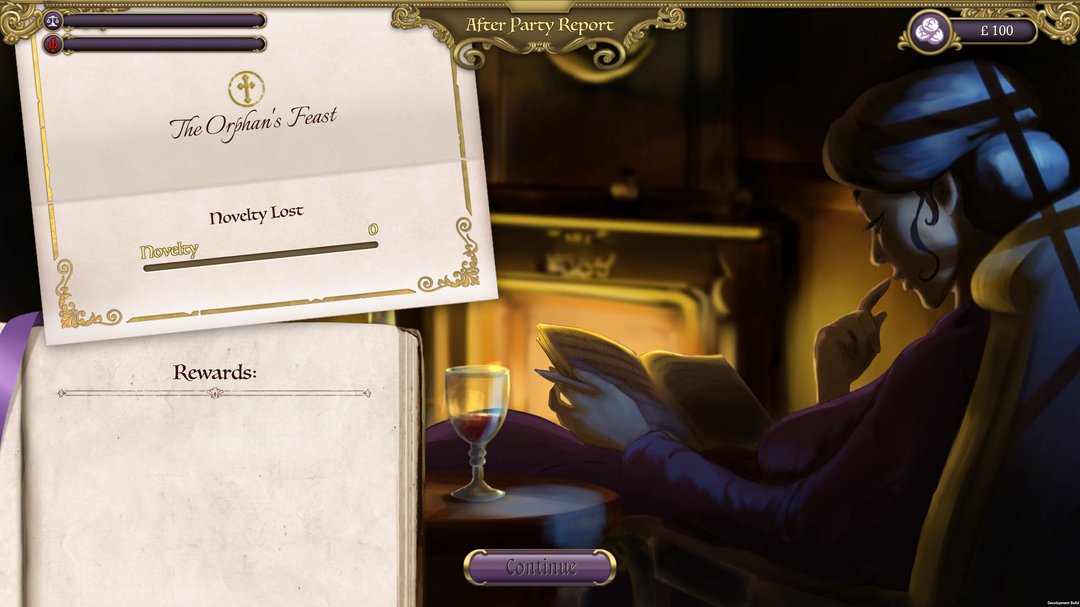 Yvette writes in her journal after each party, giving you a nice recap of the complexities of your days' event attended.

The Story So Far

Ambition is a game that takes place all around Paris, but mainly it shines in the gatherings you’ll be attending. Parties, salons, and other happenings pepper your calendar, and through several factors, not least among them how and who you choose to converse with, you’ll gain valuable gossip and swing the minds and hearts of those around you.

The game starts centered on a common woman, Yvette, pulling into Paris by coach. She’s to meet her fiancée, a noble she’s corresponded with by letters. When he turns up missing, and Yvette finds herself at a party alone she was meant to accompany him to, things quickly grow ugly. I won’t spoil too much, but she’s attending not a party but a salon of the revolutionaries, and Yvette’s naïve nature soon turns her host against her. This isn’t to say Ambition gives you no agency in the start of the game; you get plenty of opportunities to come away richer or poorer for the experience, and as the game opens up (keep in mind we’re still in tutorial territory here) you’ll have a whole buffet of options with which to tailor your playthrough. What the starting party does do quite well, though, is in setting up your motivation. Do you question the political leanings of your strangely absent fiancée? Do you want revenge on the stuck-up people who humiliated you? Or do their sharp words instead motivate you to learn more of what’s going on around you? Maybe you don't care and just want in with high society. Characters drive this story, and you’ll quickly find yourself surrounded by quite the cast. 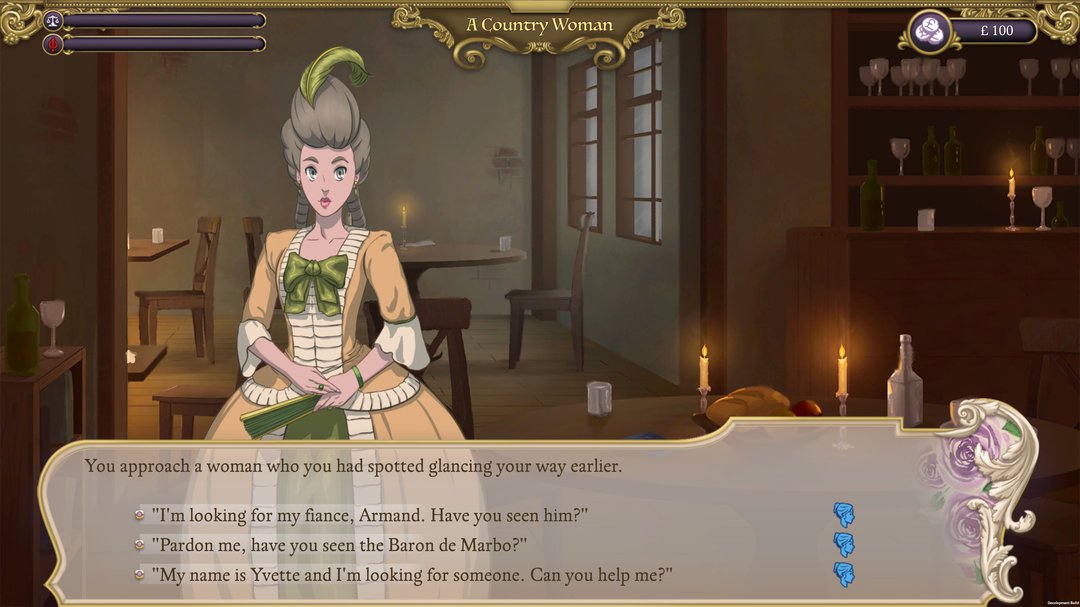 Sometimes it's tough to tell what the "right" choice is. Act with your heart and you'll find the story that suits you best!

Alongside the main game of narrative encounters, you play a few other little minigames. Gossip you gain can be sold to tabloids, netting you needed income or swinging public favor in a particular direction. You can visit a shop to purchase and sell clothes, the effects and novelty of which are constantly in question as you go about your various gatherings, giving you bonuses or penalties, and diminishing the more you "overuse" them. And there are further narrative encounters that will net you all sorts of bonuses should you have the means and grit to go after them.

You’ll also find yourself managing your fatigue, as a life of constant partying may leave you drained and at a severe disadvantage when venturing out again. You can basically use any day on your calendar to visit one location on the map, accomplish one side event, or spend the day doing nothing but resting down your fatigue. If your calendar says that today’s an invitation to a gathering, you won’t be able to do anything but prep for and attend it. You can skip gatherings any time, say if you’re too tired to risk making a botched appearance, but there is a reputation hit to not showing up. Such good news for Yvette! Life in the high society of Paris is every bit as engaging as she’d hoped, but how you manage your finances, wardrobe, fatigue, and of course your public image, along with who and what your ambition truly craves, are all in your own hands. 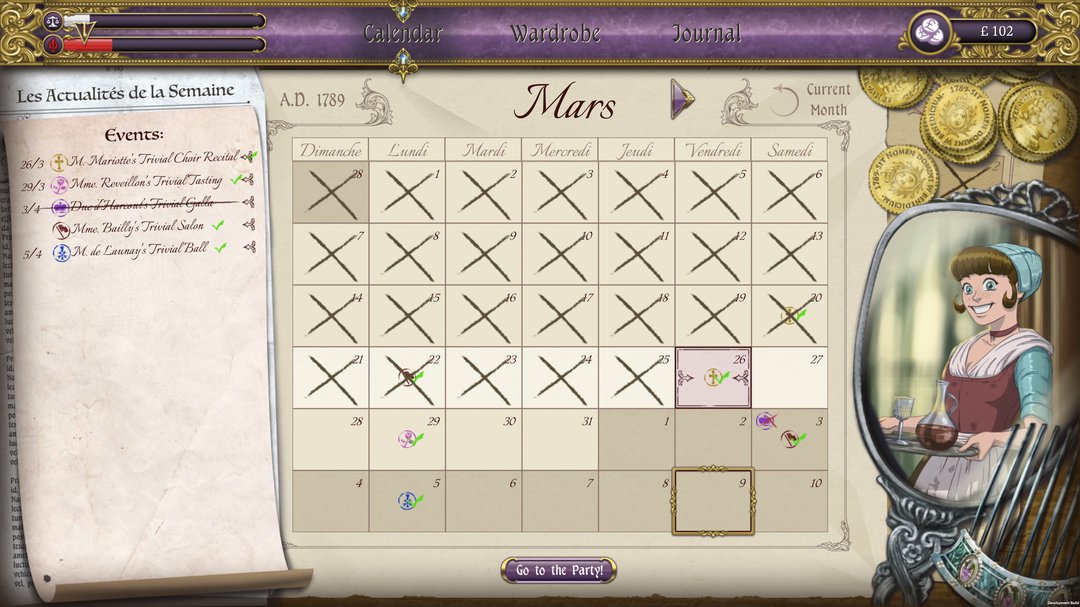 Your days will quickly fill up with all sorts of events, when you're not busy roaming Paris that is.

Devil In The Details

While my preview build unfortunately didn’t let me play nearly as much as I’d hoped, I was still able to note many of the little details that made this game truly special when I saw it at PAX East nearly a lifetime ago. There’s been a lot of attention to small things that bring this period to life. Cartoonish as the characters may be drawn, their clothing styles are inspired directly from the period. The music also fits the Baroque period that would have been the style of the times. At several points I had to remind myself that I was listening to original compositions rather than actual, historical pieces. And yet there’s more! Depending on who’s party you’re going to, the music may reflect a slightly more “in vogue” style, say for a revolutionary salon, versus the aristocracy playing what would be seen as “getting old” for the time. Whether you notice these little touches or not, the game is all the richer for them.

There are so many of these subtle little hints that embellish your experience. Though I’ll just come out and say this for the record: the music in particular for this game earns a special award! As someone who grew up playing classical piano for years, I can say it’s absolutely spot on. It even has little extra flourishes, such as the pleasant piece you’re listening to turning suddenly sour, shifting to a minor key or changing character, perfectly in time with a downward shift in dialogue. This game never drops the mood it works so hard to create. 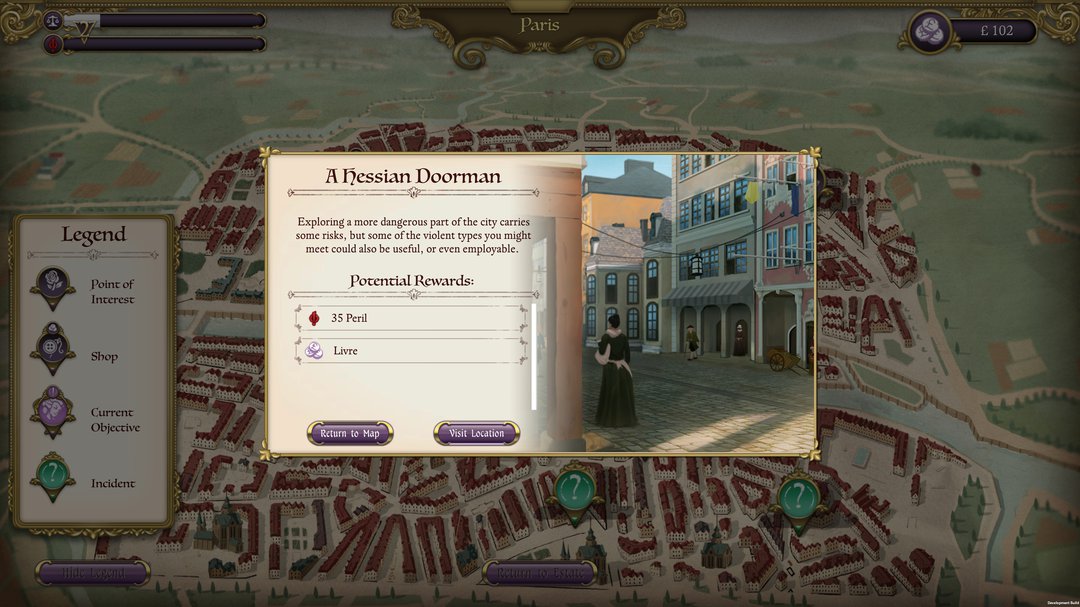 Some side encounters offer you very interesting ways to develop your network, hinting at just how devious you may need to be in the future.

A Partygoer To Watch

In my own playthrough, after my first night’s party, I found myself without a carriage, holding my head high against being made an object of ridicule. Yet I wondered how I would get Yvette home. Among the choices of carriages to perhaps seek a ride with, I chose what looked like the coach of a woman in mourning. I got more than I bargained for. The widow in the carriage had been grieving for an unusual amount of time, yet also possessed a shrewd wit and calculating gaze. She also drank water out of a very fine glass in an age when people consumed wine like it came from wellsprings. I found her intriguing and mysterious, yet also relatable in our talking, and by the ride’s end I couldn’t wait to find out when I might have Yvette speak with her again.

How will your tale go? Will you seek to ingratiate yourself with the nobility? Will you seek all the privilege and excitement of the high society life you’ve craved? What will you do to silence those that seem to have it out for your reputation and perhaps even your life? Will you save your own head as the guillotine looms? Personally, I love a good narrative game as well as games with intrigue, and Ambition has these both in ample measure. If you’re like me, you know a game like this doesn’t come along very often. Head on over to their page on Steam and give it a wishlist (you can try a free demo too)! This will be one to keep your eyes out for sure. It’s going places, and I’m sure everyone’s wondering just how high it will climb.