Android: Netrunner is easily the most stressful, anxiety-ridden game I've ever played at a table.

I'm not being over-dramatic here: this is a card game that was meant to cause you to weigh every move, a game designed to make you work on your poker face and ability to bluff your way out of a paper bag. The cyberpunk theme adds to this, the amazing card art and the terminology of the game making you feel like you are playing in a dystopian future. Corporations, desperately trying to keep their guise of control and power in place in order to turn a profit; Hackers, risking their lives for money or for rebellious causes, jacking their minds into the web to score big. The internet in the future is filled with valuable data, but also is filled with dangerous code that can melt your hardware if you don't have the right program for the job. 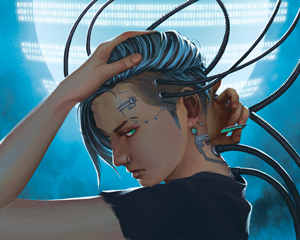 The art for this game...I cannot say enough good things about how well it sets the mood.

Every single step you take here feels weighty, filled with the chance of lucky victory or sudden defeat. Often, I've found myself rocking back and forth in my chair, debating whether or not it's time to run against the corporation's programming to get the big score of points I need to win, or if the face-down prize at the end of the road could in fact be a trap meant to rewrite my brain, ending the game just as quickly.

This constant stress and sense of urgency is the exact reason why this is one of the most fantastic games I've ever played.

Hacking the internet seems like a less life-or-death premise than many other card games... usually, you are warring wizards or warlords, conjuring great beasts or world changing magic. This is where Netrunner's genius of game design comes into play, and elevates a much smaller conflict into something riveting. Here, the intensity comes from the fact that you are not evenly matched: a hacker against a corporation, the little guy taking on 'the man'... or a business looking out against rogue interests. It's brilliant, and it opens up appeal to many different people. Want to feel like the underdog? Why not play as a child genius who tests her mind against the best defenses she can find online? Want to feel like you exist in the world of Bladerunner? Well, the corporation Haas-Bioroid makes, and fights against, the rights of artificially created beings.

Victory conditions are varied as well, and the way to win the most efficient way depends on how you build your deck. What it comes down to is the idea of agendas: cards that the corporations player has to put on the field in 'servers' and put money down on. Once the target number is reached, the corporation scores it, clears any extra effects, and its taken out of play. Seven agenda points, and its game over: the Corporation has managed to succeed in its goals, and goes on printing money and keeping down the little guy. 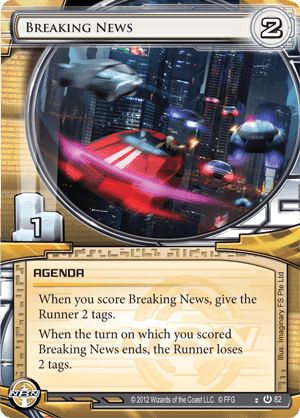 The hacker wants agenda points too... but there's none of them in their own deck. Instead, being reckless individuals, they take and steal. They can make 'runs' on servers, and if they get an agenda, its theirs: no need to pay or take time to build up...just smash and grab. It should be mentioned that your hand, your deck of cards, and even your graveyard (or 'archives', in Netrunner speak: it should be said that the game's terminology is one of the learning curves for the game) can all be run on. As a runner, it's such a rush when you pull cards off the top of your foe's deck and steal points before they even have a chance to see the cards themselves.

This is where the bluffing enters the picture in a big way. The hacker has the advantage of being the aggressor and being able to grab points cheaply, but the corporate player has the advantage of building programming defenses on each server called ICE, and these can do everything from just shutting out the runner until they manage to install the right program to get around it...to dealing damage. Yes, there is damage in this game - three different types, representing everything from having your equipment fry to the corporation finding out where you live and sending some unsavory figures with high caliber bullets after you. Or...the evil corporation just burns your house down, signified by them 'tracing' you to your home address with code tracking so they know just where to strike. If you ever play this game for yourself, you will learn to cringe whenever you hear "Scorched Earth", trust me. 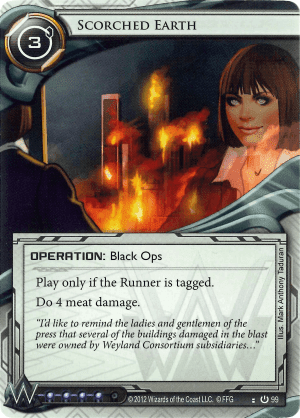 You know it's a dystopia when someone in a suitlooks out over a burning city with a smile.

That's not even the worst part though: Sometimes, after you've managed to break into a server, spending credits and time and energy for turns to get in...you find out that what you were looking for wasn't an agenda at all, but instead, some rather lethal counter code made to rewrite your brain so that you can only think of waffles ever again. The corporation plays all his cards face down first, you see: many times, you won't know exactly what you are trying to grab until you invest your time and resources to steal it...and that's when it can all blows up in your face.

I cannot tell you how many times I've gotten up from the table cursing wildly after making a poor choice in this game. I also cannot tell you how many times I've laughed hysterically when I'm able to call the other player's bluff and steal the game right out from underneath their nose. For the last several months, this has become a game I play weekly with others like Zoë, and I can't get over how damn inventive you can be in how to trick and misdirect your opponent. I've watched a hacker player lose all of their hardware and hacking programs just to drain money from the corporation, to a corporation player purposefully giving up agenda points so they can use a card to trace and hunt down the Runner...and well, you know bad things are about to happen. 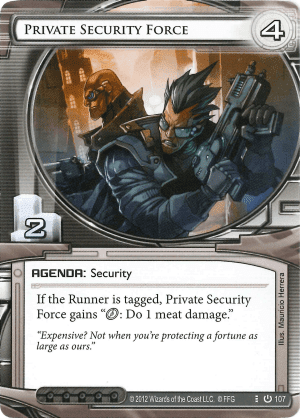 Remember, this is a game where you DON'T haveto kill your opponent...its just hilarious when you do it.

During these casual meetings, where six or eight of us square off with each other, game play will stop as someone starts laughing, and we will crowd around one player or another to see a ridiculous move they were able to pull off. There are so many different approaches to deck building in this game, from building high defenses, or purposefully building very little, instead relying on goading the hacker player into traps. On the other hand, hacker decks can be based around money making to fuel their tricks, building up powerful hardware, or just melting the programmed defenses the corporations have to offer. Each style has its own merit, and there is enough card variability to never quite know what to expect....even if you know for a fact your jerk of a friend is running an all trap deck. You have to rely on your wits, your ability to push for the win...and your ability to prepare for the worst. Sometimes, you spend turns not trying to win, but just stop your opponent from making money to advance towards their own goals, ruining their plans before they get off the ground. Again, another satisfying feeling when it's managed. 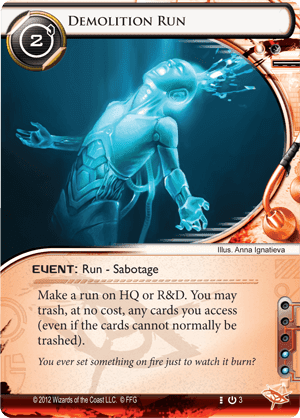 I could keep going about how amazing this game is, for various reasons: the artwork, the price point in comparison to the CCG style of card games... but honestly, what needs to stand out first is how unique the game's mechanics are. The simple change towards it being asymmetrical game play alters the entire way you have to approach Android: Netrunner. You can't just rush towards winning first, but instead you have to win differently. As the hacker, do you want to build up a rig filled with programs and enough money to run all of your favorite toys, or do you want to run in eyes blind, going for quick point grabs and hope its enough to stay in the lead? As the corporation, do you want to carefully plan out walls of defensive programming, or would you rather try to trick the hacker into a trap? 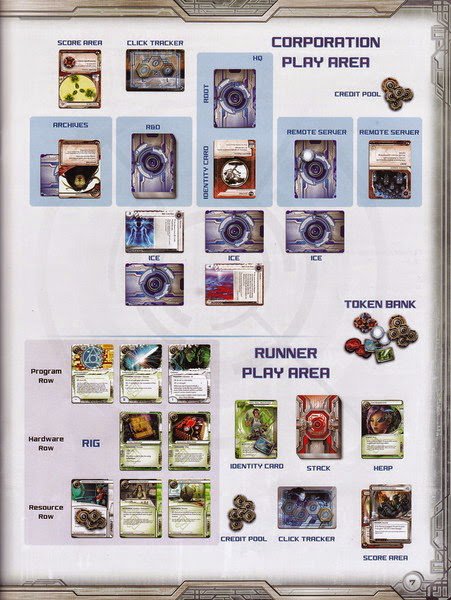 I won't lie: there is a learning curve here...but once you are past it, this game rewards you in spades.

I'm meeting with a friend to play again tonight, and I know I'm going to lose a few times. I cringe as I try to run on their servers, as they are a master of slipping a trap in where I would least expect it, anticipating the patterns I use to try and score points. I've been getting better though, at reading bluffs, and making a few of my own. Making it seem that I'm determined to break into the corporation's hand before making a grab at an unprotected deck. Sometimes it works, and I win by a landslide. Other times, I hit a snare, and I'm helpless as I watch my hacker's life drain away, flat-lining from neurological shock.

Whether I'm winning or losing tonight, I can't wait to play. I can't wait to learn even more ways of how to be a sneaky jerk in this game, and I can't wait to laugh with good friends about the experience either way. So go on, pick up a box for yourself: its a Legacy Card Game, or LCG, so every core box has the same cards... and more than enough to let you try out each faction in the game, and make a very strong hacker and corporation deck each.

Take a risk, run the net... just make sure you don't flat-line along the way.