The Chillest Board Game You’re Not Playing

A Biography Of One Of My Most-Played Games

Tales of the Arabian Nights

It would be a massive understatement to simply say I have a lot of board games in my collection. And while it doesn’t span into the region of multiple hundreds of boxes taking shelves along an entire basement floor, it’s safe for me to share that I’ve bought games that remain in their original shrink wrap today, unplayed. I’ve bought games that have been played only a handful of times and then been shelved into early retirement. I’ve bought amazing games simply to add to the collection in the hopes that they will one day see the light hanging over my dining room table. And then there are the favorites, games that just seem to hit the table over and over again no matter the crowd.

Tales of the Arabian Nights is one of those games. While my friends and family enjoy a good space battle or the occasional crunchy Eurogame, Tales offers something a bit different. It is a game like no other, filling a space in my collection that isn’t likely to be jousted by any other title. And yet, despite its uniqueness, it’s a title that I don’t often see shared when people discuss the board games they play. If you enjoy adventure and story, read on, and let me sweep you into a world of Arabian folklore. 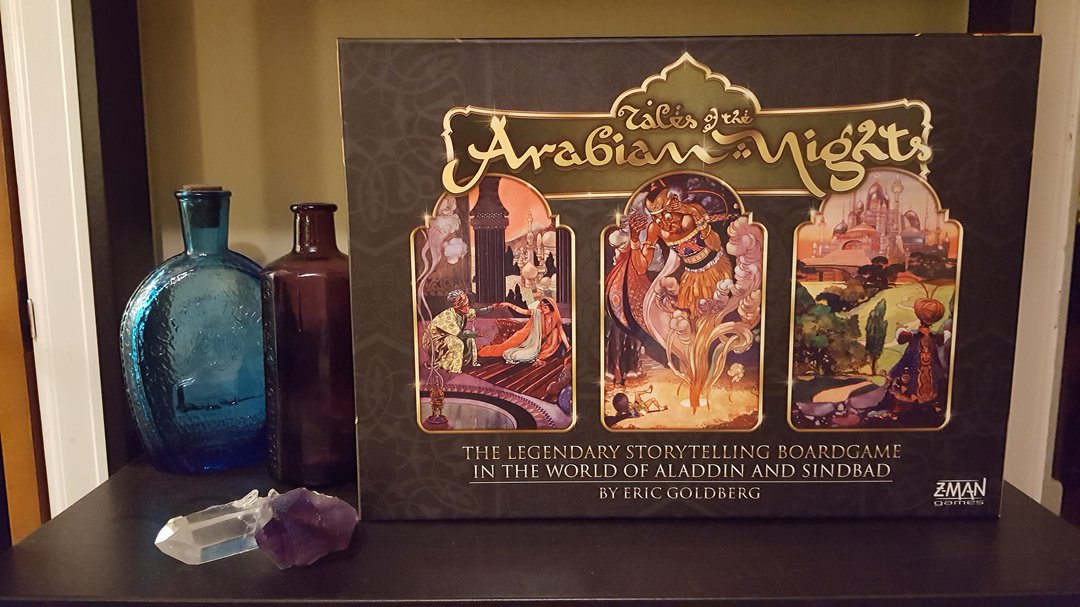 It has such a place of honor in my collection that it gets its own shelf!

The rules to Tales of the Arabian Nights are so simple, they can be explained in a single paragraph. Each turn, players move around a land of ancient Arabian lore, encountering adventure and excitement at every turn, trying to experience the best story. The first player to accumulate enough points in this way returns home to Baghdad and declares victory. Each turn, a player rolls some dice, adds up some numbers, compares those numbers with an event card, and has the players to her left and right cross reference the results with a reaction matrix and a book of tales. Remember those choose-your-own-adventure books as a kid? “Make this particular choice, flip to page 57 and keep reading.” Tales is basically the king of these, giving you dozens of ways to respond. Simply choose a reaction to the thing you find and listen as your friends read the results (often with much hilarity). Profit!

Maybe you find an imprisoned Djinn, or you’re tasked with finding a companion in the slave market for a rich merchant only to fall in love yourself, free him, and run away together. Maybe you find yourself magically whisked away to a far corner of the world, hopelessly lost. And this is to say nothing of the special locations you might eventually reach, like the fabled Cave of Wonders or perilous Valley of the Diamonds. Occasionally the game will check to see if you have a particular skill or item (you start the game with skills of your choosing but can earn more), and then it’s up to fate for your results. Whether you walk away with treasure or tragedy, you will almost always earn some kind of points that have enriched your overall story. 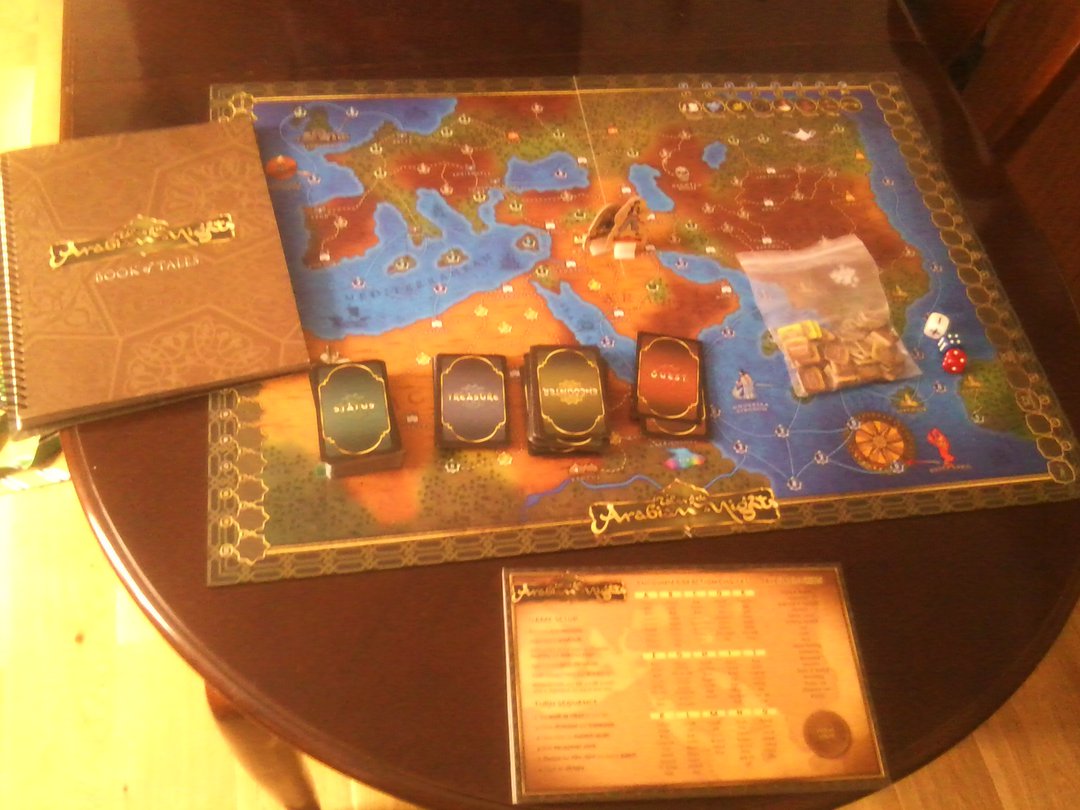 This game sets up so much faster than lots of others in my collection, making it all that much easier to get to the table.

Every single person I have played this game with regards it in the same light after finishing a game. It is the single most chill game I own in my collection. Since the object is simply to experience the best story, oftentimes even when hardship hits one of us, the compensation in points never makes us feel like anyone is truly losing. You can build any character you want, from a Sinbad the Sailor style swashbuckler to a canny Aladdin-like thief. And events of a person’s story are entertaining, even if you’re watching someone else while waiting for your next turn! But perhaps most importantly, because events can swing wildly for or against you at a moment’s notice, it is impossible to get upset at this game. You pick a destination, you roll some dice, and you choose a reaction to your event. Then you kick your feet back, sip your drink, and listen to the next chapter in your tale.

Perhaps it is possible to get upset with Tales, if you want a game where strategy always prevails or if you’re frustrated by the lack of control over the events of your story. But if that’s the case, I’d suggest that you bring a different game to the table altogether. So much about our boardgaming hobby is bringing out the right game for the particular group of people you’re hosting. If your friends hate social deduction games, for example, you probably aren’t cracking open The Resistance at your next game night. The door swings both ways, though. When my friends or family want to enjoy a game together, but they don’t want the stress of playing a heavier game, Tales of the Arabian Nights gets asked for again and again. It does best, perhaps, what we ask of all board games: it provides a medium with which to enjoy the company of others. 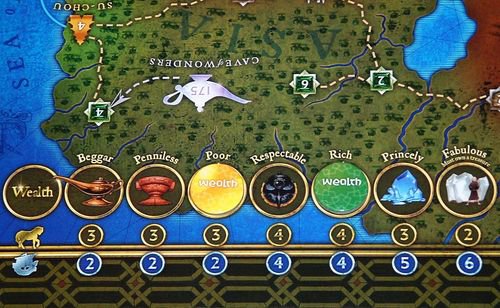 The wealth track depicts several levels of riches as well as poverty, letting you know just how broke you are.

A Cave Of Treasures Worth Pillaging

I highly recommend you pick up a copy of Tales of the Arabian Nights for the same reason it gets requested in my own home. It’s a marvelous thing to break out, easy to set up and easy to play, when everyone wants something relaxing. "Chill" is the single, best word to describe this game. As long as people understand this isn’t a game about grinding your opponents into the dust, they should be fine with it. In fact, it is worth mentioning that generally being a nicer character in the game will tend to you having more positive outcomes as opposed to say robbing every single person you come across (although this can be hilarious in its own way if you’re prepared for the consequences). If you’ve been fortunate enough to see a copy on a friend’s shelf when over for game night, make a request to try it the next time you visit!

We play with a few house rules that I feel help move the game along at a better pace. You don’t have to play with these if you prefer things straight out of the rulebook, but I’m including them here for any interested:

Finally, I will leave you with some of our funniest tales, in case you still need more enticing to check this game out:

Have strong feelings about this game? We'd love to hear about it on our Facebook! If you actually have some spare wealth levels, please consider supporting our Patreon. We like to keep the site add-free, and even just a dollar helps!