Who Put This Dating Sim In My Tactics Game?!

Before I started playing Three Houses last month, the last Fire Emblem game I played was Path of Radiance. Google tells me came out in 2005, so it’s been a while. I quickly learned how things had changed, to put it mildly.

I went into Fire Emblem: Three Houses more-or-less blind. Like I mentioned, I’ve played older Fire Emblem games, so I was expecting this to be basically the same thing: Squad-based tactics broken up with short character scenes and plot events.

Boy, was I wrong.

There’s essentially an entire second game grafted on to Three Houses where you’re a teacher at Garreg Mach, a monastery that contains both the Officers’ Academy and the Central Church (surely nothing bad could come from that…). Far from just commanding your army in battle, Three Houses has you involved in almost every aspect of their lives, from training to romance.

Sometimes you have to make difficult decisions... and sometimes this happens.

I’ll be honest: At first I didn’t understand why they’d added the Garreg Mach Monastery stuff to Fire Emblem. The Fire Emblem I knew was a squad-based tactics game, and that was about it. Sure, there was a little inventory management, and you could trigger support conversations (which I mostly skipped), but it had nothing like what I found in Three Houses.

Now I had to pick my characters’ classes, level up their skills, do fetch quests, manage their morale, and pick someone to be in love with? All while scrolling through a visual novel’s worth of conversations? It was like I was playing two games at once - in fairness, they were two very good games, but they didn’t really seem to go together. 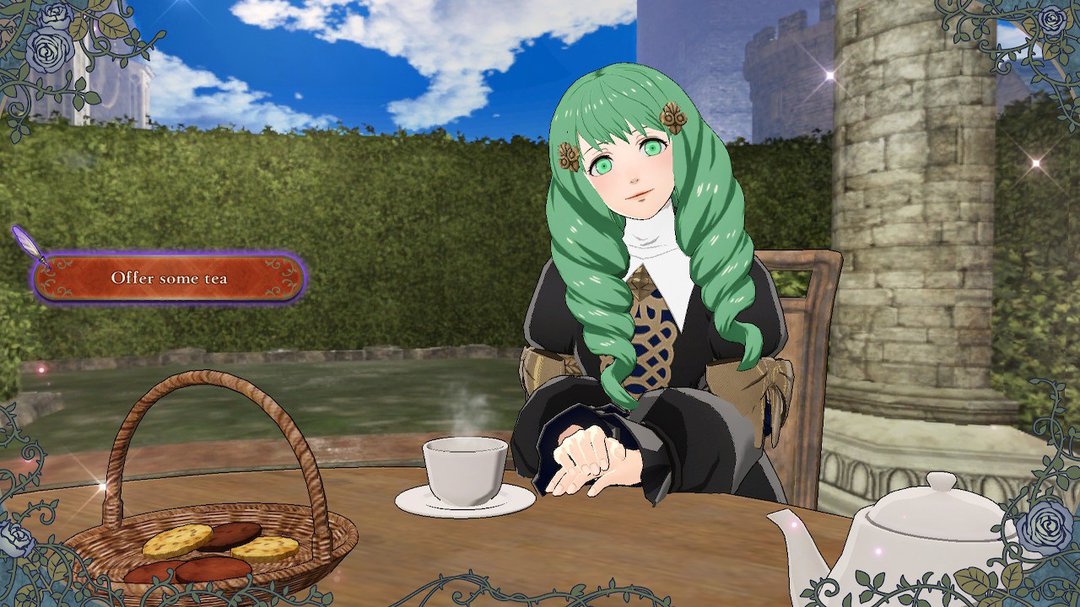 Then came the day when I was choosing my team for what promised to be an especially difficult mission. I was looking through the roster, and I caught myself thinking:

You know, it was one thing when I was leading a squad of professional soldiers and mercs into battle. Now I’m going to feel really bad if I get these kids killed, especially after all this time getting to know them.

That was when it clicked, and I knew that this game had me hooked like one of the fish in Garreg Mach’s pond. The Garreg Mach content isn’t just about preparing your army for battle; it’s about building emotional connections with your characters, so that you’ll care about the soldiers-in-training that you’re commanding. 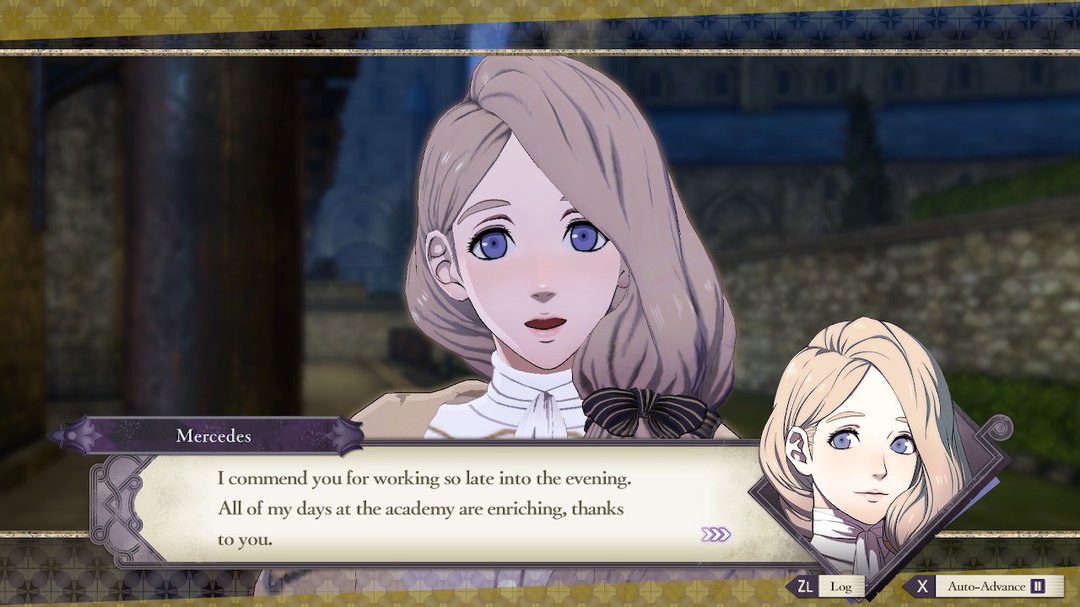 Mercedes is my sweet cinnamon roll, and I will rain magical hellfire on anyone who hurts her.

Also, if the monastery stuff isn’t your cup of tea (no pun intended), you do have the option to automate it and skip straight to the battles. However, there are two major downsides to that:

If you’re sure that you’re looking for a pure squad-tactics battler or army-management sim, then this is not the game for you; however, you might be pleasantly surprised by what Three Houses brings to the table. I know I was.

Alongside all of the new stuff that I found in Three Houses, the combat was like a favorite sneaker: familiar, comfortable, and exactly what I wanted. If you’ve ever played a Fire Emblem game, then you know what you’re in for here: You move and attack with all of your people, then the enemy does the same. Repeat until somebody wins.

You know the drill: Fight, level up, give your protag a name that an 8 year old would think is funny...

However, there are two major changes in Three Houses, and I have to say that even after playing for 50+ hours and beating the game, I’m still not sure how I feel about them. 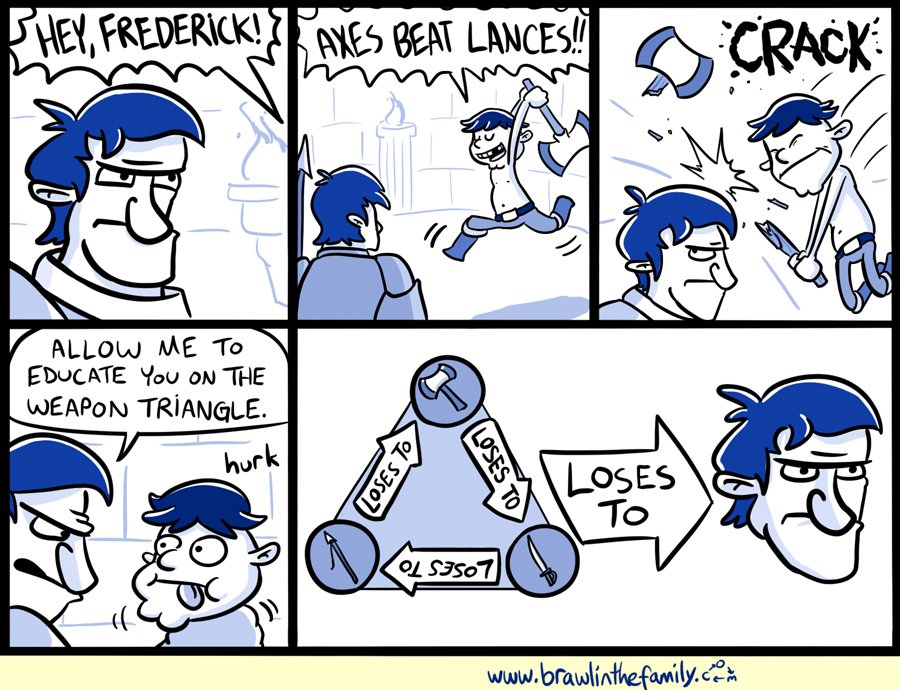 And paladins beat everything.

The weapon triangle has been an iconic part of Fire Emblem for almost 15 years, and it adds another layer of strategy to building your squads and fighting your battles - if you relied too heavily on swordsmen, for example, a strong lance-wielding enemy could do serious damage. On the other hand, you could get an edge against powerful foes (especially bosses) by attacking them with their weakness.

I have mixed feelings about removing the triangle. It makes the tactics a little simpler, which gives you more flexibility in making your team and how you approach the enemy, but… well, it simplifies the tactics of a tactics game. More to the point, it feels like removing part of what makes a game Fire Emblem. 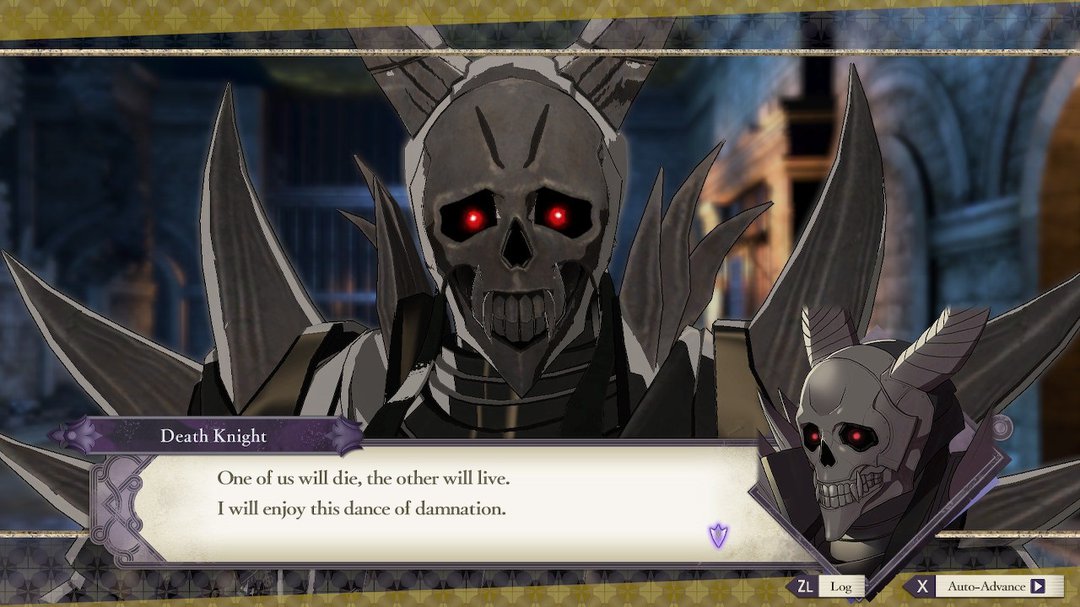 Melodramatic enemies, though? Still got plenty of those.

The other new addition is Divine Pulse, an ability that lets the protag rewind time because plot reasons. You can rewind to any point in the battle - up to and including the start of it - and you can do that so often that you basically get to replay each fight until you win (there’s a limit, but I never even came close to reaching it).

It felt like it cheapened the victory when I could undo any mistakes I made with the press of a button. Of course, that didn’t stop me from using it whenever one of my students went down, so take that however you will. 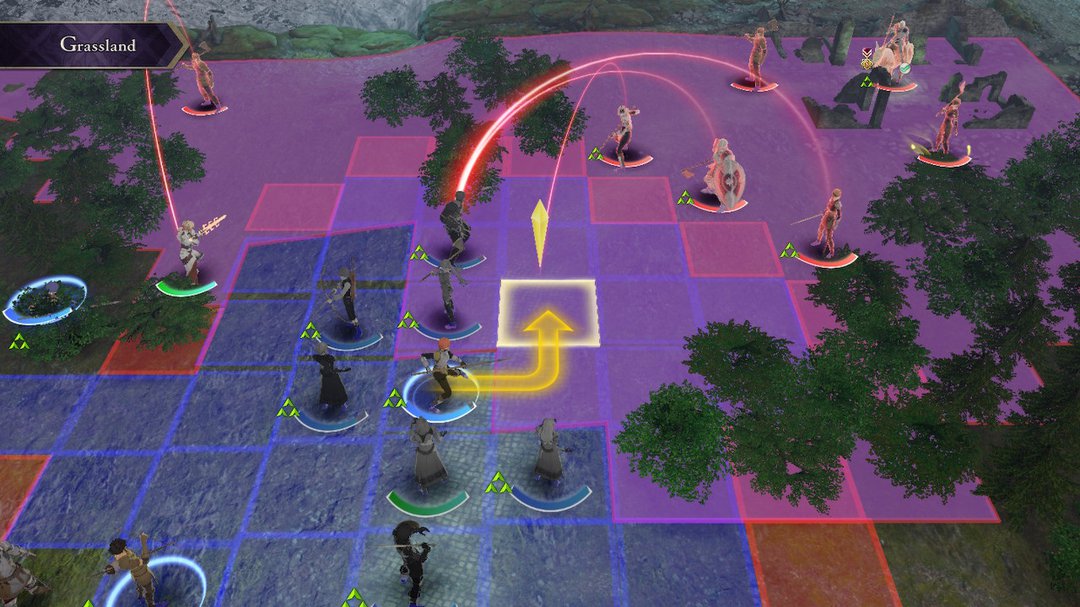 You can also not only see where enemies can move (which you could in previous games), but who they’ll attack. It really seems like the game tries to give you every possible advantage.

With all the talk of what’s changed, you might get the impression that I didn’t enjoy the battles much. However - despite my mixed feelings about certain choices the devs made - they reminded me of why I used to love Fire Emblem so much. The battles are exciting, they reward clever plans and punish overextending, and they spell out the likely results of each clash so you know if you want to commit to it or not.

A final note: I did find most of the battles to be much too easy (with a couple of notable exceptions). I reached a point where I could send in one heavy knight to tank… well, everything, and then chew up the enemy army with archers and casters. However, I was playing on Normal difficulty; I have a feeling that won’t be the case on Hard or Maddening difficulty.

Fire Emblem: Three Houses has replayability baked right into it.

At the beginning you choose one of the titular three Houses to teach for. Which House you choose will determine which characters you spend the most time with, which is already a pretty significant difference for a game that spends so much time on character interactions. 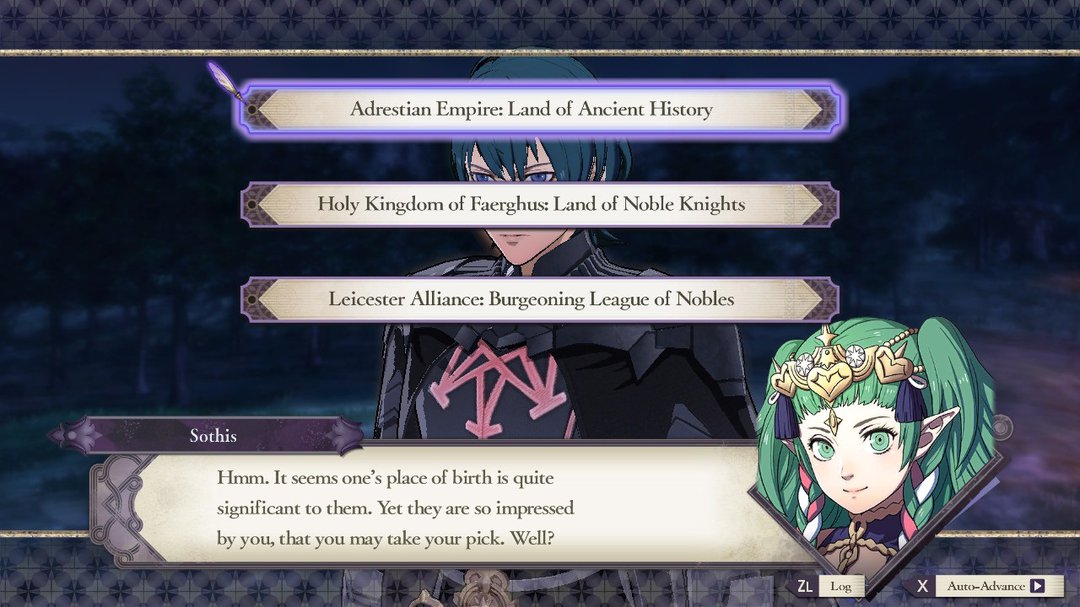 “Okay, you’ve been playing for 10 minutes and know nothing about any of this. Choose your destiny!”

Then, about halfway through the game, A Thing Happens™ and the Houses go down three very different paths. So, right from the start, this is a game that you can play at least three times without it being too repetitive.

That’s not even taking into account that there are harder difficulties to challenge yourself with, and incredible depth in how you build your characters and your squads. Out of curiosity, I poked my nose in at the Three Houses subreddit and checked some of the character advice posts - I didn’t even understand half of what they were saying, so I’ve clearly just scratched the surface of this game. 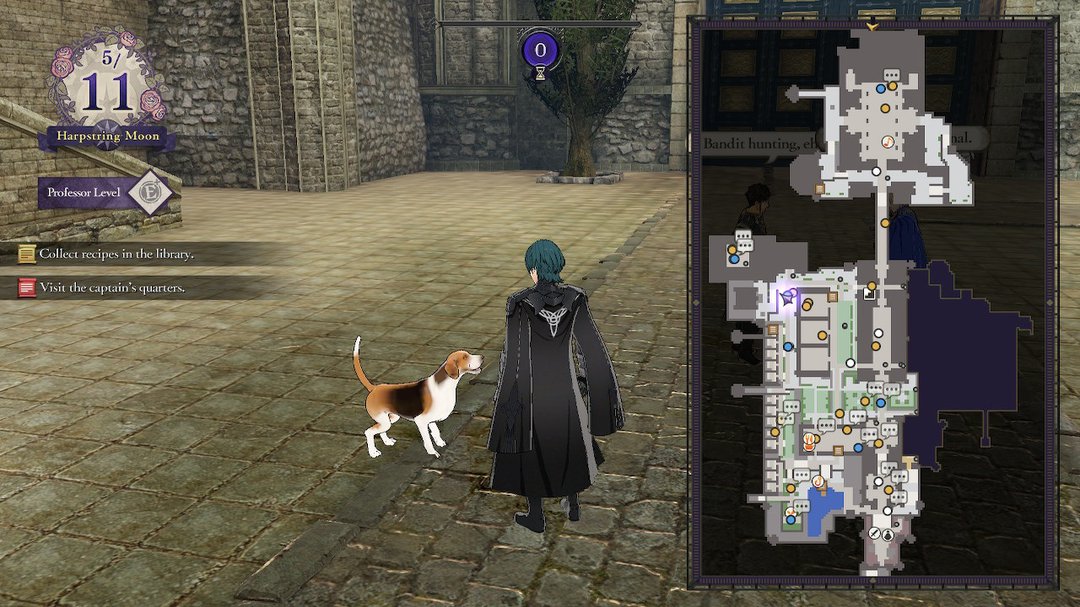 Maybe I’ll discover a way to pet the dogs!

This is usually where I’d sum up the game’s strengths and weaknesses, speculate about who’d enjoy playing it, and give my opinion on whether it’s worth the cost.

However, I think all you need to know is this: I beat the game on Normal after about 50 hours of play. I then immediately bought the DLC, chose a different House, and started over on a harder difficulty. Three Houses helped this crusty old gamer fall in love with Fire Emblem all over again.