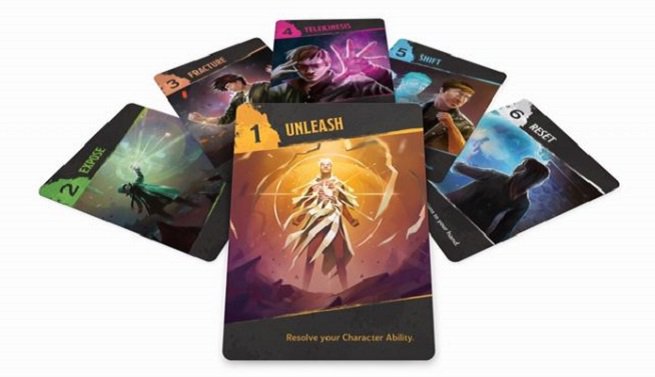 Typically, board games fall into one of two generalized catagories: quick and simple, or complex and slow. This is a little reductive, but since I started reviewing board games, I find that most games find it difficult to keep a game complex but quick, while others try to keep a game easy to learn, but end up losing a sense of depth. In a lot of

Entropy: Worlds Collide splits the difference. It manages to be a game that can be played in under twenty minutes, keeps a surprising amount of depth and player interaction, all while keeping the game easy to set up and manage. Is this a game that has managed to find a perfect compromise, or has it fallen into a place of just feeling lukewarm to both sides?

The Concept: Choose Your Own Reality

Sometimes in life, you just want to find your way home. Entropy: Worlds Collide is a game that takes that idea and ramps it up to eleven. Essentially, each player is dealt a character that is from a parallel world, and their one objective is to find a way home. The way they do this is by using a hand of six cards (each player's hand is identical) to look through the center deck of cards, called the Nexus, for shards their matching reality. Each turn, a player has to choose one of their six cards to play face down, before they are all shown at once, and the actions resolve. 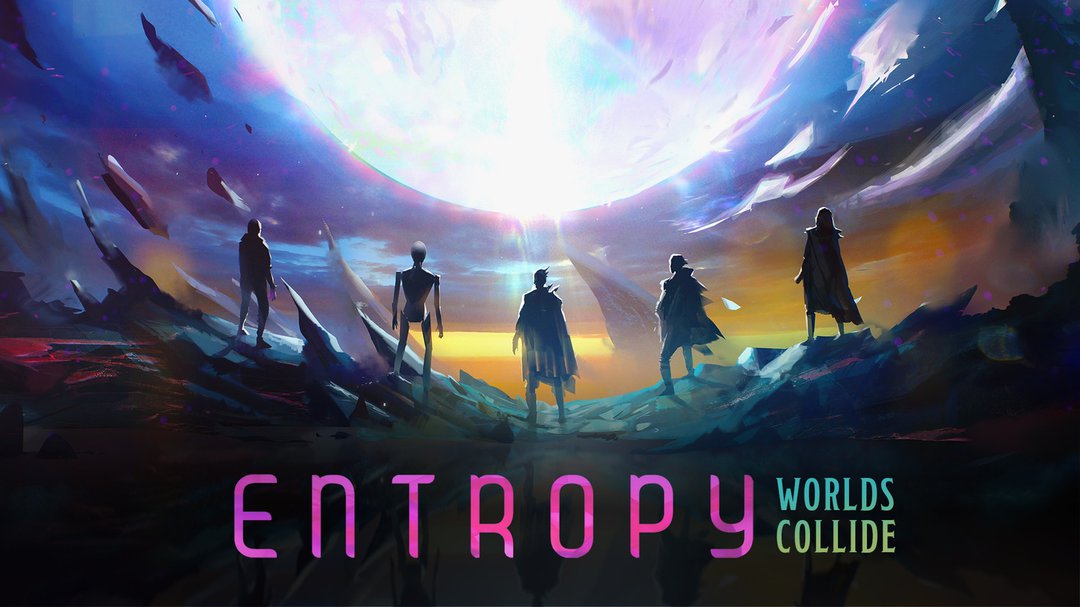 Choosing which card to play is the crux of Entropy. You can, in this order:

1 - Use your character's unique ability; this is where each player differentiates themselves from everyone else.2 - Reveal a shard, meaning flipping it over for all to see. If it is one of your four shards, great! It gets locked into your zone.3 - Take two shards from the Nexus, without showing anyone. At this point though, you can only keep one card in front of you, in a place called your Hold. The other goes face up into the discard.4 - Take a shard, from anywhere. If someone has gone through the deck and has discarded your shards, you can just grab them for your victory area. If you want to gamble at the Nexus, you can do that too.5 - Reset your hand. Once you play a card, its discarded, so you can't just keep doing the same action over and over again. This lets you get your actions back faster.6 - Take the Anchor. The Anchor is a tie-breaking card that's set off to the side. Normally, if two people play the same action, they are cancelled out; having the anchor lets you use that ability anyway.

Once you have shards in your victory area, they are out of play, and you are closer to winning the game. Collecting four shards (or just three, while also keeping the one wild shard in your Hold) lets you win. It's fast and efficient, with little room to get caught up coming up with grand bargains and strategies. You are trying to get back home, and there's no time to waste after all. Entropy lets each player have full access to what's on the field, while giving just enough variety based on the one individual character power each player gets. Can you get lucky enough to grab the shards of your unique reality faster than everyone else, or are you going to be tricky in which cards you hide in your hold and which you choose to reveal?

The Good: Dimensions Of Gameplay

What astounds me about Entropy: Worlds Collide is that it fits so much into such a small package. If you are playing with a full five players, the Nexus still only has twenty-five cards, plus the floating anchor card. If you are playing with two players, there is only a stunning 13 cards in play. Meanwhile, each player only has to worry about six cards in their hand at any point in time, rather than a full deck of cards they must cycle through. Because you play only one card in a turn, and you all play your cards at at once, players have to decide quickly, rather than being stuck with indecision.

All of this sounds as if this would make Entropy simplistic at first glance, but the depth becomes apparent very quickly. Because there are only a few cards in play, and extremely limited actions, each choice matters. The core beauty of this game kicks in as you realize how quickly a game can an end; you are not just trying to win, but to win faster than everyone else around the table. Most games I have played feel like nailbiters, because I know that one of my opponents was one more shard from victory.

Each character has their own artistic theming that matches their individual character power.

The interaction between players causes struggle without any actual fighting: There isn't any sense of a 'take that' element in Entropy, but you are always trying to outplay everyone at the table to be as efficient as possible. Playing the same card as an opponent cancels your turn out, so maybe you want to grab the tie-breaking anchor card. Maybe you know that your one friend loves to go through the discard pile to pull out his shards, so you choose to hide one of his shards in your hold, rather than holding onto one of your own. You have to be incrediblity strategic, not for waiting out your opponents, but instead to win before they can.

Once you learn how to play, games are fast, and it feels replayable because of the different characters you can play as. Again, because there are so few cards, just this one power change dramatically alters how you approach each turn, looking for your opening. I really enjoyed playing rounds with four players, where we could finish a game in ten (yes, ten!) minutes, pass our characters to the left, and start over.

This is a game that, if everyone knows how to play, takes literal seconds to sort out and start. Finishing four rounds of any card or board game in less than an hour is impressive, and its near miraculous when those players also find a game that is this small and quick as immersive as it can be. The last positive about Entropy - and also why it has staying power - is the phenomenal art. The colors are bright and pop off the character action cards, while each character has its own distinctive style that helps match it to its shards of reality.

Entropy: Worlds Collide is unique in its gameplay, fast to play, great in its sci-fi art style... and still manages to be fun.

The Bad: A Game With A Niche Audience

Entropy is a game that plays incredibly fast, moves at a brisk pace, and offers some tough decisions... once you learn how to play. Honestly, this is the worst part of this dimension-shattering card game; trying to teach the rules. While the instructions in the rulebook are perfectly servicable, and there are plenty of more complex and confusing games out there, Entropy suffers from gamers judging the cover of its packaging. Because Entropy: Worlds Collide comes in such a small box, has such great artwork with minimal writing, and has such an ease of set up, modern gamers are almost trained to expect a fun, lighthearted party game, which it is certainly not.

Sometimes, a game will not go your way because the Nexus doesn't draw your reality shards. Fortunately, with 10-15 minute games, there's little time for frustration.

This predisposition had me trying to teach this game to several people who happily signed up to play thinking it would be a social party game like Cards Against Humanity. After a few attempts to explain the difference between taking cards and revealing them, they would shrug, let the game finish, and step away unimpressed. This brings me to the second detraction: Entropy is a bit harder to teach because of its unique gameplay. Many card games do not have seperate actions for taking cards from the deck, and then spending another turn revealing what might be a game winning card. Oftentimes, I had to tell players to stop flipping over cards immediately, or a player would be surprised by the ability to reveal cards right off the top of the deck even after playing a few rounds.

Entropy Manages To Be Clever And Quick

Entropy: Worlds Collide is a game that's hard to pin down an audience for. It has the depth of choices that you usually find in a lengthy eurogame, but is barely larger than a deck of cards with the bluffing of a poker game. Normally, combining two things which are good is a good thing, but let's be honest, sometimes putting together peanut butter and another great food doesn't always work. This is a game that might be too complex for some, and too short for others; for many, buying this game might just come down to because the artwork and genre is something you already enjoy.

After playing two dozen hands, I have found that I'm glad I have a copy of Entropy: Worlds Collide. It's fun, and it fills a niche in my collection without taking up almost any space. The art is crisp and futuristic, and the rush of guessing where your reality shards are correctly feels wonderful. The game itself is fast and crisp, and now that I have a small group of people that have played before, it is no problem to get out and play around with while kiling some time. Most that see us playing this game are immediately attracted to the vibrant art, and once I explain we are fighting over 'shards of reality', many are willing to give Entropy a shot, even if the first time learning the game is rough.

Is Entropy: Worlds Collide worth your money? If you want to play something a little different, a little familiar, and with some really interesting design choices, then absolutely. While this game might be confusing the first few rounds you play, the elegence of the rules becomes more obvious the more times you try to get back to your own reality.