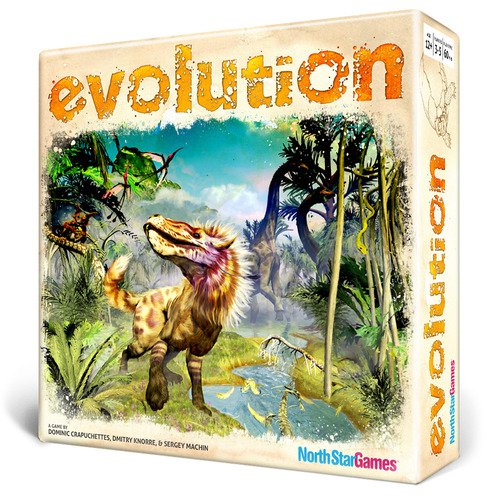 I was walking around in a Walmart the other day, because sometimes I make poor life decisions. While traipsing through the toys section, I was struck by the sheer variety of different editions of Monopoly that were on the shelves. Star Wars Monopoly, Barbie Monopoly, Power Ranger Monopoly, Spongebob Monopoly: all these are just different skins for the same game. A game which was first created in 1903 and turned into the awful unfun table-flipping monstrosity that we know today in 1935. Since its inception as a tool to show the dangers of an unbounded capitalistic society, it has left a bad taste for board games in the mouths of children and families for nearly 90 years. I only mention it because Monopoly is one of the most popular and iconic board games in America, and despite having almost a century of time existing it has not really modified its rules or evolved as a game.

Our board games these days do evolve though, don't they? New games are built on the bones of the old, with new design decisions leading to the exploration of untrod design space within the concept of “board games.” An interesting example comes to mind in the form of XCOM: The Board Game, that uses a phone or tablet app to handle the randomization and distribution of resources that would take hundreds of little cards or heaping piles of dice to cover the full gamut of new events that the game spawns. When it comes to exploring the design space of board games, it doesn’t always take fancy peripherals or flashy electronics to make a game good; honing the gameplay down to its barest elements allows one to focus on the core concepts expressed therein. I have had the pleasure of playing Evolution from North Star Games, and I’m really impressed with the elegance and simplicity of the gameplay because it evokes the “adapt or die” concept of evolution in a fast, interactive, and engaging manner. 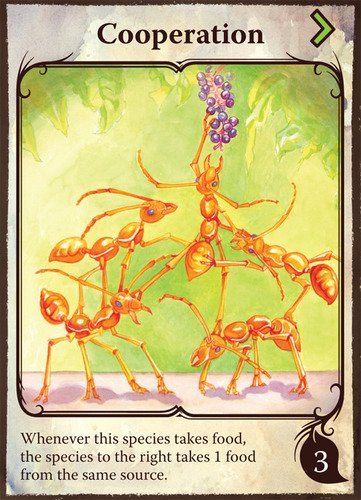 Every card has a use, and can help Darwin to look favorably upon you

At its core, Evolution is a resource management game. The goal is to eat food from a communal pool, with the winner being the player whose species managed to consume the most food over the course of the game. The game ends when the tall deck of trait cards is depleted, so it has a built in timer. At the start of every turn, players draw trait cards, then choose one to discard to fill up that communal food pool that's available for the turn. Since cards have different food values - positive or negative - it means that players who want to starve out opponents might choose to reduce available food if they can either feed faster or better. Each of the trait cards you have left gives a new ability to your species, like Foraging that lets you consume food twice as fast, or Long Neck, that lets you take one food per turn from the bank instead of the limited communal pool.

However, the game gets deeper and a little more agressive because of the presence of Carnivore cards, which allow your species to kill and eat other species, preventing them from scoring as many food points, or even killing them off entirely. If there are too many herbivores, the communal food pool is stressed, so it benefits a species to evolve and diversify into predators. Should there be a glut of predator fighting each other there may be more herbivore food available, especially if that herbivore has some of the many defensive cards available. 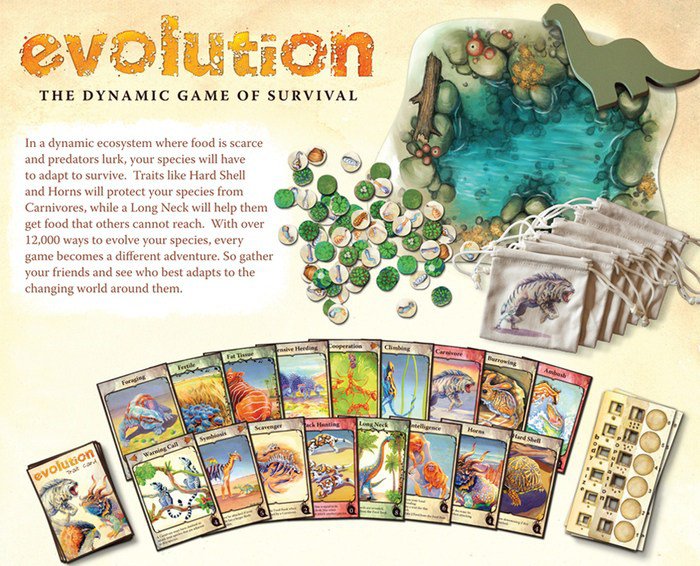 The game comes with small boards to keep track of your species, and enough variability to make each game wildly different

I think my favorite aspect of the game, and its core sensibility, is that the trait cards are 100% of the resources available. Making new species requires discarding a card, and each turn you draw three new cards plus one for each species you have. The greatest design constraint in Evolution is the limit of three traits to any one species, but you can change them at the start of every turn. Food is a measurement of victory, but victory is only obtained through card management, identifying when certain traits are valuable and discarding ones that would slow you down. You have to adapt, and pick the right traits to deal with that super predator your opponent seems to be building across the table from you.

This adaptation and evolution is so central to the mechanics and the theme of the game, and that’s why Evolution shines as a well designed game. There’s no clunky or unfun mechanics, and your ability to win is not determined by the cards you draw, but rather by your clever application and combination of what traits you do draw. Identifying when an opponent may be gearing up to create an apex predator and preparing with Hard Shells or taking to the trees with Climbing may be the only way to survive and thrive. Everything, from the game timer to expansion to resource distribution, is determined by the cards, so it means that there isn’t any fussing about with multiple decks or rolling dice. It’s all there for you to play with as you will, and the concepts and mechanics are simple enough for children to grasp and adults to appreciate. 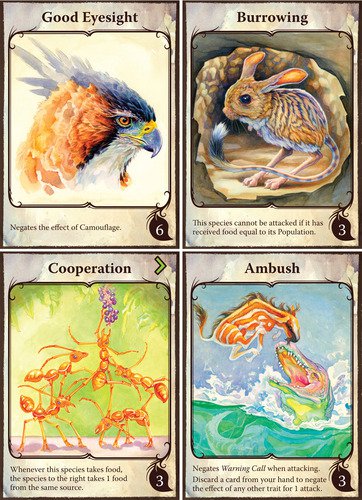 The clear and focused design has a depth that borders on the sublime, and in my mind it gets top marks for learning from the failures of its predecessors. Evolution is the game that I wish kids were playing, instead of the insipid, time consuming, and friendship ruining Monopoly. Do yourself, your friends, your kids, and even your enemies a favor, and try Evolution at your next game night.

If you want to tell me about other modern board games you like, or tell me I’m a troglodyte that can’t appreciate the classics, hit me up @dkjolner. Consider supporting our Patreon, or I might need to eat one of the other staffers to stay alive. (If you want me to eat someone specific, tweet at me.)