Imagine if Dauntless and Asteroids had a baby. It would end up being a lot like Blacksea Odyssey, a game that’s half twin-stick shooter and half monster slayer, with some roguelike elements sprinkled throughout. Blacksea Odyssey has been available on Steam since June of 2016 with 87% positive reviews, and today the PS4 port is officially released.

You play as a huntsman in the titular Blacksea Odyssey, a brutal tournament where the fiercest huntsmen in the galaxy compete to see who can find and kill the deadliest monsters. The holy grail of this contest is the legendary Titan of the Stars, a creature said to have a wingspan measured in galaxies. Whoever can find and kill this behemoth will secure his place as the universe’s greatest huntsman.

And then there’s me, who got killed by a space moth. 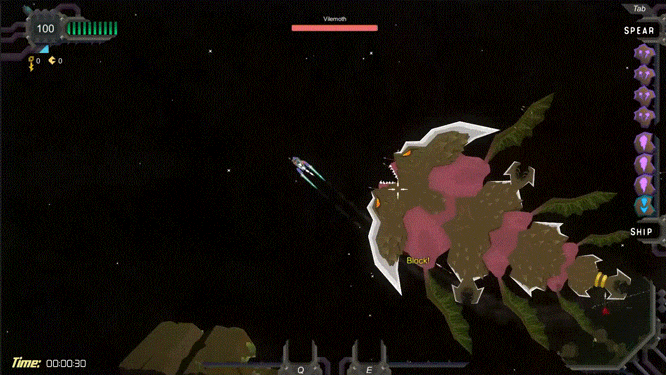 Blacksea Odyssey is a game of reflexes and quick thinking. Even the smallest monsters are twice the size of your tiny spaceship, and you have to fight them off with throwing spears and a harpoon - it’s a bit silly, but hey, space Vikings! The boss monsters are many times larger than that, to the point that they could eat your ship like a Skittle and use your spears as toothpicks. Fighting a boss in Blacksea Odyssey is a frantic race to keep your distance and not get swatted out of the sky.

However, for all that, there’s a tactical side to this game as well. It’s not enough to just wildly throw spears while dodging attacks, especially against the boss monsters. If you focus fire one particular part of the monster - such as the Vilemoth’s wing… fin… things - it will eventually start blinking red. When that happens, you can hook that piece with your harpoon and rip it clean off. Not only does it cause a lot of damage and feel really good to do, you can also slow the monster down or take away some of its attacks.

This is the reason why I made the comparison to Dauntless earlier. Like Dauntless, the most effective strategies involve targeting specific areas of the monster and breaking them. You also need to learn the monster’s attack patterns if you want to have a chance of beating it; twitch reflexes are important, but they’ll only take you so far. 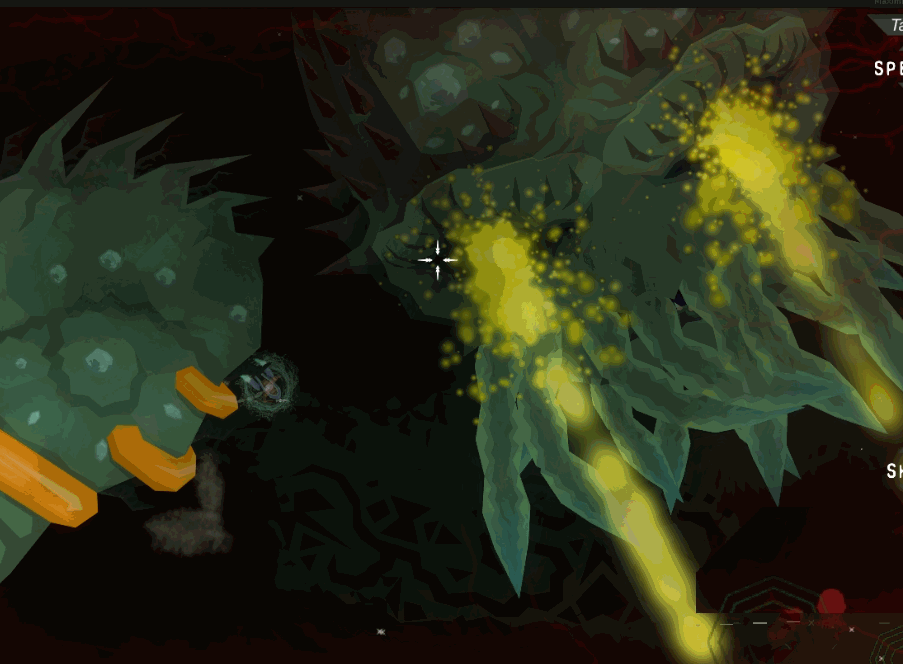 Fight enemies like the Belch Brothers, the planet-ravaging Vilemoth, and… Cthulu?

Blacksea Odyssey also has a lot of roguelike elements to it: permadeath, randomly generated levels, unlockable characters and items, and a merciless difficulty curve. Your starting ship and weapon are, unsurprisingly, pretty underwhelming. You can become stronger by finding (or buying) and equipping runes throughout your hunts, which have various effects like simple increased damage or attack speed, a freezing effect to slow enemies, or mines that come out behind you in case a monster is getting a bit too close. There’s an impressive array of runes in Blacksea Odyssey, but which ones you’ll get on any run is down to luck of the draw.

If this were an actual arcade game, it would eat a lot of quarters.

While the mechanics of Blacksea Odyssey are solid and well done, minus a couple of bugs, it doesn’t quite capture the visceral thrill of the hunt the same way that Dauntless or Monster Hunter does. In those games, fighting the monsters just feels good. Breaking a Behemoth part in Dauntless is one of the most satisfying feelings I’ve found in gaming, and this is where Blacksea Odyssey comes up short.

When I tear off a building-sized piece of a monster, I want to feel my controller vibrate and see the blood splatter. I want a sound effect that says, “you just wrecked that thing” (not literally). It’s fun to play, but it’s just missing that little something extra to really draw the player in.

The areas, while interesting ideas of what a space desert, jungle, and so on might look like, are pretty small and mostly empty. Furthermore, there is no hard barrier on the edge of the level, instead you are pushed back in if you venture too far. More than once, I got flung right back into the monsters I was trying to keep away from. It’s nothing that can’t be worked around, but it is frustrating in the heat of combat. 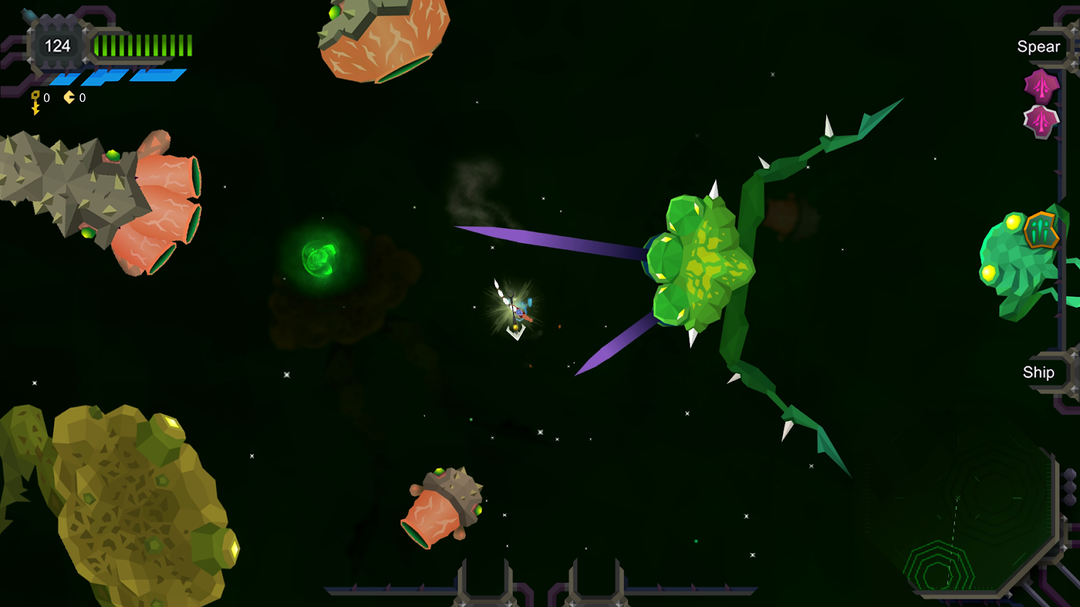 Then, as I mentioned, there were a couple of minor bugs. There are random cutscenes between hunts where the huntsmen - colorful characters all - have some time to banter. I got the same cutscene twice in a row, where they discover that one of them has a cat on his ship, and for some reason they all seem very uncomfortable about it. More directly gameplay-related, I also had one of the item descriptions get stuck on the screen, so it wouldn’t pull up any new ones and I wasn’t able to see what my pickups did.

None of this is really a dealbreaker for me personally, but buyer beware.

High Replayability For A Low Price

Much like The Binding of Isaac (though not to the same extent), Blacksea Odyssey’s ever-harder levels and wide array of items mean that you get a lot of bang for your buck. When you only have to spend 10 of them in the first place, it starts looking like a pretty solid purchase - assuming that you enjoy the gameplay. 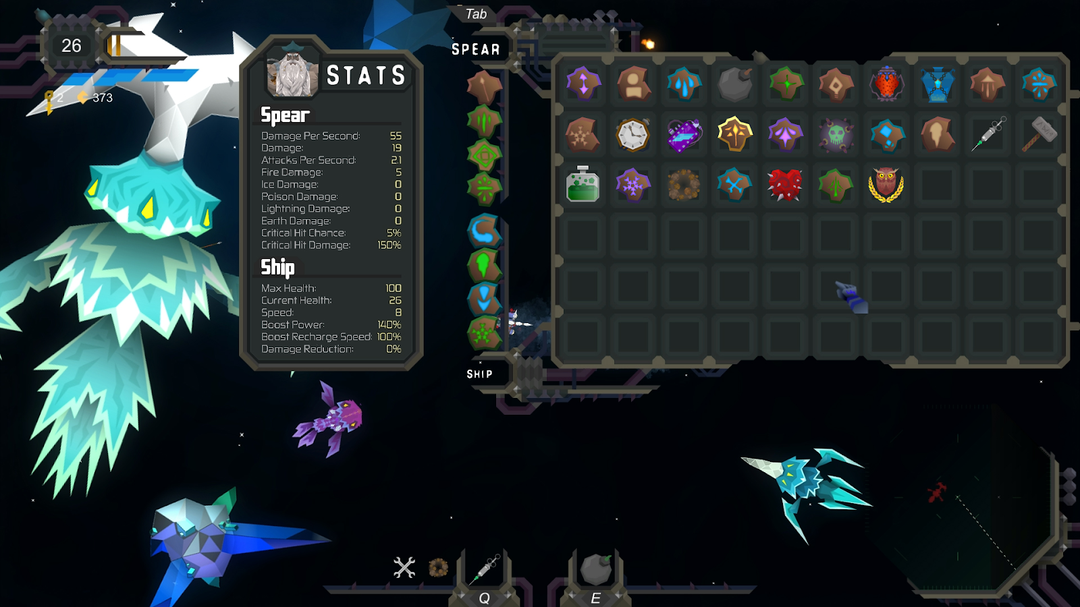 A huge array of runes and eight slots to put them in means a lot of customization options.

Luckily, there is a free demo available on Steam (just click “Download Demo” on the right hand side) for aspiring huntsmen to cut their teeth on before signing up to join the Odyssey. I recommend at least giving it a try.

Happy hunting! Perhaps I’ll see you on the Blacksea.