Metal Is Not Dead, And Neither Are Rhythm Games

What do you get when you cross Rock Band with a zombie apocalypse? The correct answer is my senior year of college, but I would also accept Double Kick Heroes.

Double Kick Heroes is a rhythm shooter game by Headbang Club, now in early access on Steam. You play as a rock band who, having spent the last several months locked underground practicing for their next big gig, are completely caught off guard by the hordes of zombies and monsters outside. With no other options, they rig up their car with guns that they got from… somewhere. Being better at playing music than they are at shooting guns, naturally the band decides that their best bet is to hook the guns up to their instruments so that the guns fire while they play.

Yup, makes perfect sense to me.

With their ride loaded up and kitted out, the band set out across the wasteland in search of survivors and safety.

Double Kick Heroes is one of those games that just feels great to play. One of the devs, Frédéric Motte, is both a composer for video game OSTs and a producer for real-life metal bands, which shows in both the quality of the music and the controls. He wanted to make it feel as much like actually playing drums as possible, which would be tough to pull off given that keyboards and controllers are exactly nothing like drum sets. I couldn’t tell you how much like playing drums it is, as I’m not a drummer. What I can tell you is that the moment you find the rhythm and start tearing through hordes of zombies is hugely satisfying.

There is a lot to keep track of onscreen, especially in later levels. However, Double Kick Heroes ramps you up to that point in what feels like a natural progression. You start out only needing to worry about your two kicks (hence the game’s title), which fire your top and bottom guns, and watching where the enemies are so you know which way to shoot. You slowly build up to playing the music, watching the enemies, steering your Gundillac, and charging and using two different special abilities by hitting your snare and cymbal respectively. 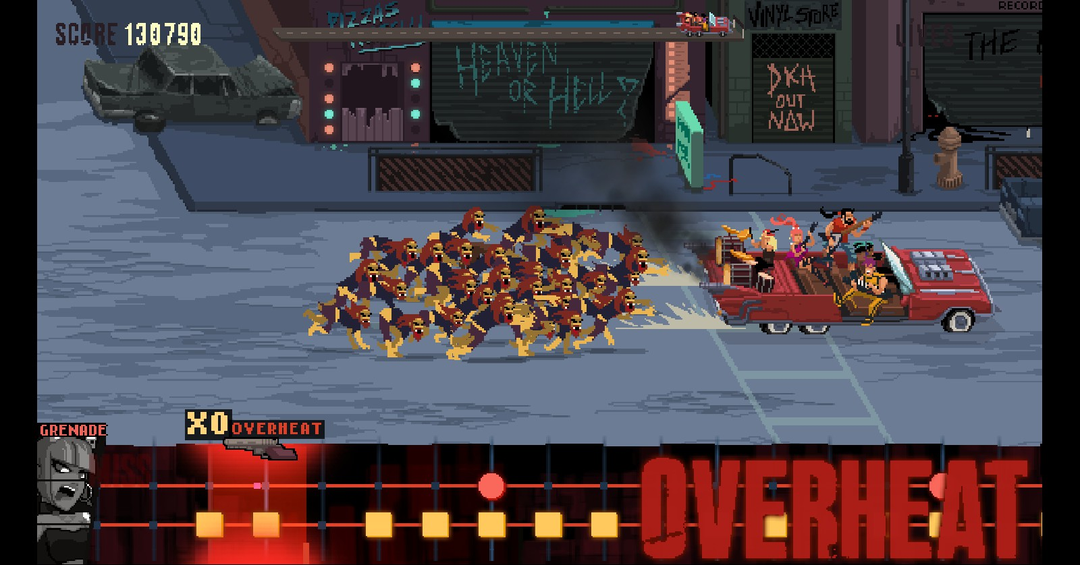 This is what it looks like when you don’t do all of that.

I find Double Kick Heroes to be just the right level of challenge, at least once you find the right difficulty setting for yourself. It builds up from simple patterns to frenetic action. The difficulty curve might be a little too steep - the early levels were pretty easy, so I raised the difficulty only to find myself hopelessly flailing at my keyboard an hour later.

A Symphony Of Destruction Needs The Right Instrument

Double Kick Heroes sounds (and is) absurd, but it feels great to play - if you have the right controller. I first played this game at PAX East, where it was featured in the Indie Megabooth. They had fight sticks or similar things hooked up to the stations, and the buttons just felt good to press; they were spaced out well so your fingers weren’t tripping themselves up, and had the kind of solidity that you’d expect from a game about shooting zombies with the power of metal. When I went home and played on my keyboard, while still fun, it just didn’t feel right.

If you already have a suitable controller or can find one for cheap, I definitely recommend using that instead of your keyboard, but don’t go buying an expensive new fight stick just to better enjoy this $15 game.

The other major downfall that Double Kick Heroes has is that the music, while good, is all original - not the kind of iconic stuff you’d find in a big-name game like Rock Band. It’s not surprising, since licensing popular music costs a lot of money that an indie developer like Headbang Club probably doesn’t have. However, they did include a clever way around this by allowing players to import their own music and play community-designed tracks.

Would Crazy Train be too obvious?

Run To The Hills, Or At Least To The Steam Store

Though it’s still in early access, there’s enough of Double Kick Heroes up and running that it’s worth taking a look. You can play through the Story mode or, if you want to skip all of that pesky “plot” stuff, the Arcade mode. If you’re in the mood for a new rhythm game, and you’re a fan of metal and/or off-beat humor, this one could be worth your while based on that alone.

I’m actually not sure whether the level editor is working or not. I can’t seem to do anything with it and there are no instructions, so either it’s not ready yet or I just don’t know what I’m doing - and if that’s the case, then it badly needs a Help section or a more intuitive interface. There’s also a gameplay mode called Hellgate that’s not available yet, so I’m definitely looking forward to seeing what that is. 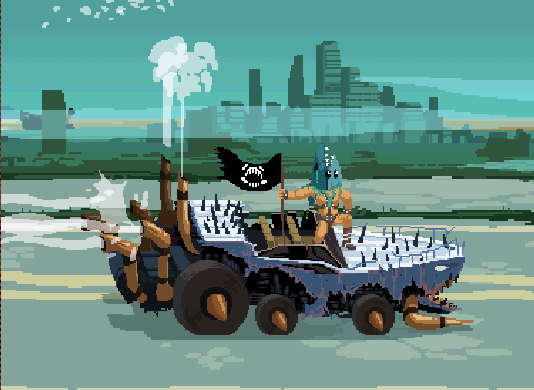 This guy’s name is Sharkmungous and that’s all you need to know.

Unfortunately, $14.99 is a tough sell for a game that, as of now, might only last you a few hours. Without knowing what the final price will be, it’s hard to say whether it’s more worth it to buy the early access version now or to wait for the full release. What they have now is great, but by video game standards there’s just not a whole lot of it. The community levels are what will really give Double Kick Heroes its staying power.

If, like me, you get excited when you hear the words “heavy metal zombie apocalypse rhythm shooter,” then shell out the money now and know that there is more to come. If not, maybe this is one to leave on your wishlist so you can buy the full version when it drops.