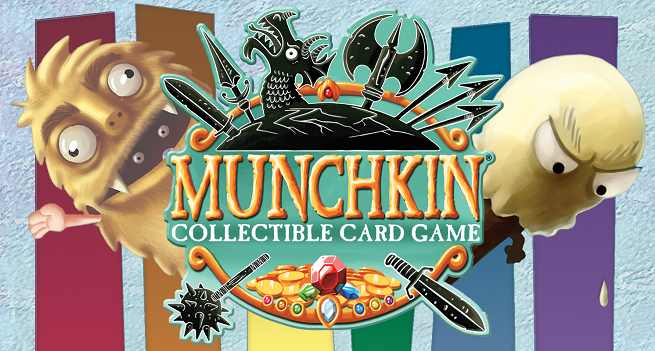 I got the chance to try this new addition to the Munchkin family at PAX East, and I was pleasantly surprised to find that it is not much like either Munchkin or other CCGs. Let me explain.

I found a group of Steve Jackson representatives who were demoing this game, so I sat down to see what it was all about. My opponent started laying out monster cards, explaining about life points, Mischief cards (instants, to use Magic: the Gathering terms) “zapping” and “squishing” (activating and destroying cards, respectively), and so on, and my eyes started to glaze over.

Here we go again, I thought. Spend resources, summon monsters, play spells, I get it. Show me something new.

“And we bluff,” he said. “You won’t know what monster I’m attacking you with.”

Now I was paying attention.

At a glance, the Munchkin CCG might look a lot like a physical version of Hearthstone. You play as a hero with a unique ability, your available resource (gold, in this case) ticks up by one each turn to a maximum of ten, and you win by reducing your opponent’s life points to zero. However, Munchkin introduces a new core mechanic: lying. Most card games involve tricking your opponent, but in this one you can straight-up lie about what card you’re playing.

The way combat works is that you place one card at a time from your hand face down, then place any amount of your available gold next to it. Your opponent then has a few options for how to deal with it: sending out an ally to block, intercepting it with a weapon, running away, or just standing to take the hit. If your opponent runs, the card (still face down) goes to your stash to be re-added to your hand at the start of your next turn, and you get back the gold you wagered to spend on another card. 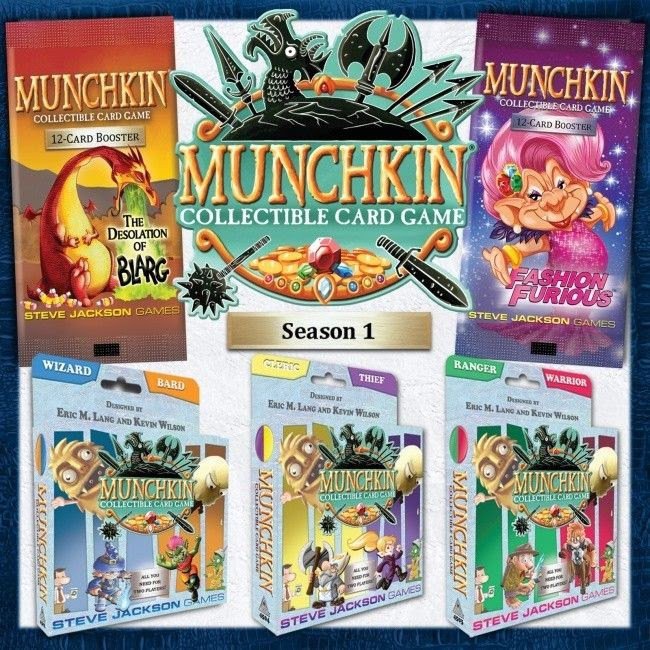 The two booster sets pictured aren't out yet, so here's a possibly disturbing glimpse of the future.

Note that you only get one free run per turn, after which you step on a rusty nail and lose two life each additional time you run. Since you only start with 20 life, trying to run from everything will get you killed very quickly.

If your opponent decides to take the monster on, that’s when things really get interesting. You see, the amount of gold that you commit doesn’t need to match how much the monster costs. You can overpay to make a monster look more threatening than it is, or you can underpay as a bluff. You could even put out a card that isn’t a monster at all.

If you paid for the monster properly and your opponent decides to take the hit, then everything works out normally. You deal damage equal to the monster’s attack power and it goes to your stash to be reused next turn. If you didn’t pay enough, or you bluffed with a card that isn’t a monster, you suffer one damage yourself.

What all of this amounts to is a mental fencing match where you and your opponent try to predict each other, draw out the other player’s defenses, and slip in the kill shot without getting killed yourself. The mind games don’t reach the level of Netrunner, but figuring out when your opponent is BSing you is key to victory.

In the last 600 words I’ve already explained most of the rules of the Munchkin CCG. It’s not a complicated game - anyone who has played Magic, Hearthstone, or even Pokemon will be able to pick it up almost immediately. However, the bluffing adds a surprising degree of depth. 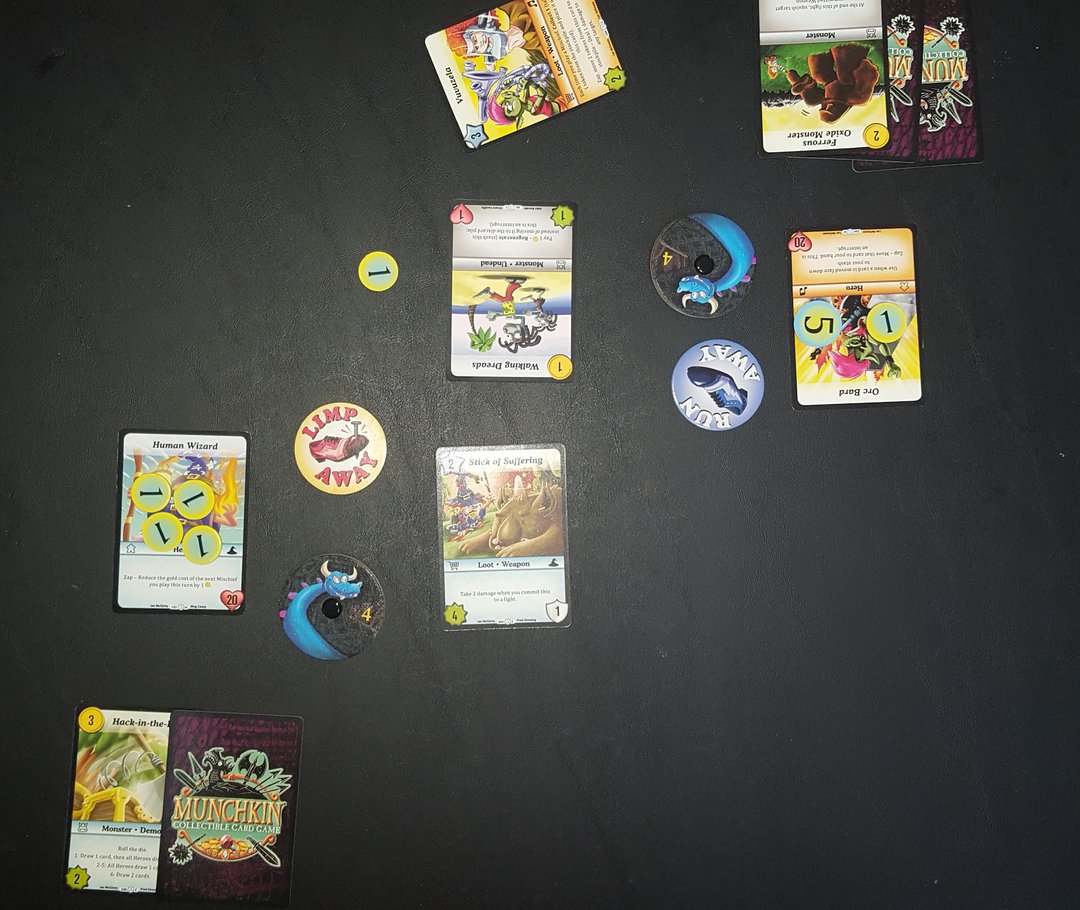 My Walking Dreads are intercepted by my opponent's Stick of Suffering.

When I’m looking at a new CCG, one of the things I always try to estimate is how much player skill factors in versus sheer card power. Obviously, any CCG is going to give the advantage to the player who spends more money to get a better deck; that’s just the nature of the beast. However, if you gave a Netrunner expert only the core set of cards, and had him go up against a novice with a full collection, the expert would still have a fair chance of winning just by outplaying his opponent. The opposite is true in a game like Yu-Gi-Oh, where there’s less opportunity to outsmart and outmaneuver the other player: no matter how well you play your starter deck, you’ll be steamrolled by anyone who’s spent enough money on the game.

The Munchkin CCG falls nearer to the Netrunner end of that spectrum. On the one hand, cards with high stats and strong abilities can overrun your opponent’s defenses and score the kill. On the other hand, it doesn’t matter how powerful your monster is if your opponent runs away from it, and having your bluff called will cost you a life point no matter how much real-world money you’ve spent.

The Munchkin CCG is quite simply a good game, and a great twist on conventional CCGs. That shouldn’t be too surprising, since the design team features Kevin Wilson - probably best known for his work on the second edition of Arkham Horror - and Eric Lang, known for… well, a lot of stuff, but most recently for Rising Sun.

With names like those alongside Steve Jackson Games and the Munchkin franchise, this game has some serious clout behind it. What isn’t so serious is the game itself; the old Munchkin sense of humor is undeniably here, from Treachery cards like Zorch! and Kaboom! to classic Munchkin monsters like 3,872 Orcs, to the player characters.

If you ever see me playing anything besides the Orc Bard in this game, I have been kidnapped and am trying to signal you.

In conclusion, Munchkin CCG is a standout addition to a glutted genre. I don’t expect it to dethrone Magic: the Gathering, but then again I’m not sure that they’re competing for the same crowd anyway. What I do expect is that the Munchkin CCG to do very well for itself. It’s easy to learn, hard to master, quick to play, and has some great personality - as well as an already-huge IP behind it. In my humble opinion, this goofy little game has all the makings of greatness.