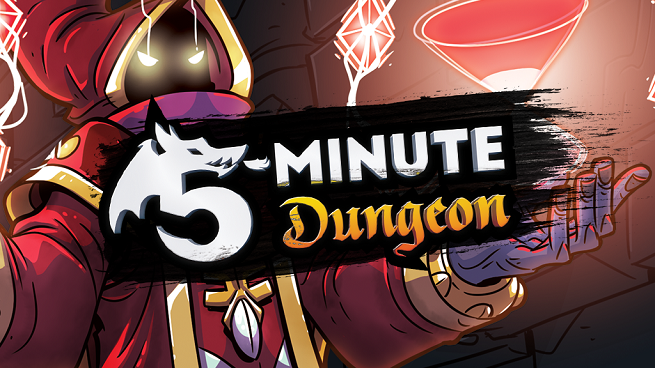 Board games are not known for speed. This isn’t a criticism, but simply a fact. At least one person you know has a horror story of playing a Monopoly game while growing up that took 8 hours. Another individual may look at you with haunted eyes, then exclaim how they had heard how amazing Terraforming Mars is; however, they hadn’t anticipated playing with three hyper competitive opponents for three hours, pouring through strategy guides.

Five Minute Dungeon is a breath of fresh air from this common critique. It takes the idea that games have to be drawn out affairs and destroys it. Five Minute Dungeon distills down the idea of a board game to the smallest portion it can, and that is a very good thing.

Five Minute Dungeon is exactly what it sounds like: you and your friends are a team of adventurers, and you have a goal to beat a dungeon in exactly five minutes. This isn’t a joke: to play, you pull out a timer, set it to five minutes, and when you draw the first card off the dungeon deck, you hit go. There’s even an app you can download for your smart phone to make this easier and more thematic. The goal is to clear every single dungeon card, and then defeat the boss at the end. 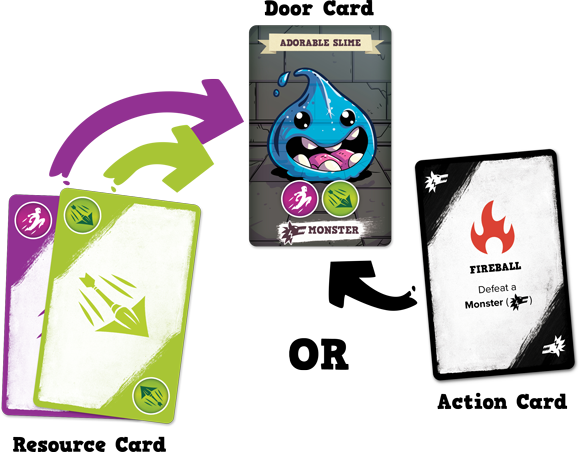 The game has a wonderfully simple premise and execution.

With 3-5 players, you choose a character board based on five colors, and shuffle the matching color deck to put on that character board. Once you pull that first dungeon card, you also draw your hand of cards, and try and defeat whatever is in front of you. You do this by playing cards that match the symbols on the foe you are facing, tossing them into the middle of the table. You are going to have to shout out your cards however: every card that hits the center of the table is gone, meaning that you have to try and work together. If a card only needs two arrow cards to defeat, and all five players throw down arrow cards at once, that means you might play out your decks too quickly. Take too long coordinating however, and that timer is going to cause you to lose.

While Five Minute Dungeon does live up to its word, a true play-through can be about a half hour. The reason for this is that the box comes with five bosses to defeat, each scaling to be more difficult than the last. Sure, defeating the Baby Barbarian can feel breezy with only twenty basic cards in the dungeon, but by the time you get up to A Freakin’ Dragon (The actual name!), there are thirty-five cards to try and struggle through. It means there’s more to the game than just five minutes, while letting players enjoy a feeling of success even if failure finally does crash down around you.

What’s amazing about Five Minute Dungeon is how well it manages multiple game mechanics while still feeling so easy to pick up and play. While the basic premise is simple, the second-to-second decision making of which cards to keep and which to play is what gives Five Minute Dungeon life. Part of this struggle is because each deck of player cards is different; the green deck has a ton of versatile special ‘wild cards’ for example, giving you better chances to defeat a card without discarding cards. The yellow deck meanwhile is a ‘healing’ deck, letting comrades pull cards back to your hand that you discard, giving back valuable options. 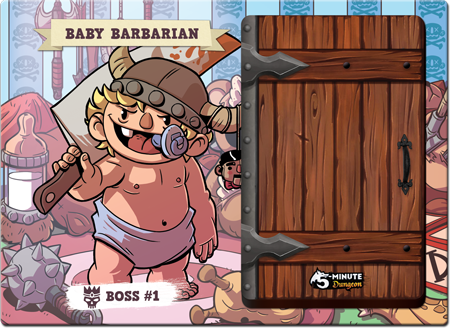 Multiple bosses means multiple reasons to play in one sitting.

When you choose your player board, you are essentially choosing a character class to try and play. Each player board has two sides, and each one thematically has a special power that just you have access to. Whether you can discard cards to instantly defeat an obstacle, or if you can discard cards to stop the timer for a breather, every person feels useful by the end of the game.

This game causes tension of the very best kind. You have to constantly try to talk with everyone around the table, while also shouting out which cards you are slamming down to defeat the cards of the dungeon. You will end up having one player turning over the next dungeon card as quickly as possible, another shouting out the ticking countdown as warning, and another trying their best to scoop away the piles of cards in the center of the table.

This is a game that is infectious with its enthusiasm, and has a feel that is very, very different than most board games in my collection.

The Nitpicks: 52 Card Pick Up

One of the benefits of such a small game is that when you get the basics right, there isn’t much left to complain about. 5 Minute Dungeon advertises a ridiculous blur of excitement, and it delivers. For some people, the only problem they will have with this game is figuring out how to pick up all the cards flung into the middle of the table and resort them. 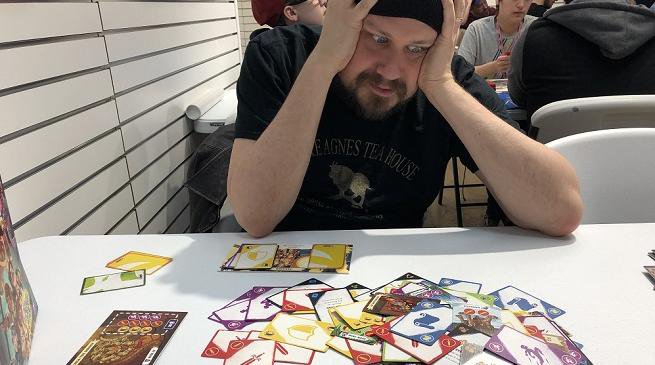 You will be very surprised how quickly cards can pile up.

If there was one issue that bears some thought, it is the difficulty scale: while this fast game’s point isn’t really whether you win or lose, I could absolutely tell there was a difference between playing with three players and with five. While you add additional event or mini-boss cards for every player, it doesn’t make up for the massive benefit you get for bringing a brand new deck to the table. In addition, a lot of the rapid fun of the game is lost when you play with only two players. In order be winnable, you combine two decks for a massive stack, but the chaotic feel of the game is certainly a little more muted, as you are likely to lose just by not getting the right cards in your hand.

Five Minute Dungeon Is Always In My Game Bag

This is a game that has already become an old reliable during game events; Five Minute Dungeon is something I pull out whenever I want a game night to become loud and filled with laughs. It’s easy to teach, it creates a feeling of camaraderie, and it’s quick. During a gaming event filled with strangers, this is the game I will pull out to start a mood of enjoyment and fun.

I love this game. It gets back to the real reason why you gather together and play. It’s simple to pick up and easy to understand, while still also being filled with fun tension. The fact that this game is so inexpensive (Twenty dollars!) is just the icing on the cake. Get Five Minute Dungeon: You will not regret it.