Getting Lost In The Wildermyth

Half Area Control, Half Turn-Based Tactics, Half Visual Novel, This Game Is More Than The Sum Of Its Parts

Wildermyth is the first, and currently only, game by indie studio Worldwalker Games (unless you count a musical bubble-popping app). However, while the studio is new, the core staff are industry vets.
That blend of industry experience and indie free spirit clearly shows in Wildermyth. On the one hand, it’s got an impressive level of polish and balance. On the other hand, it’s not quite like anything else out there. When you have a combination like this lined up, it can mean you end up with some really great new ideas... or a mess that doesn't ever really come together. Fortunately, Wildermyth has managed to capture some pretty strange magic that's worth a closer look.

Wildermyth is a delightful mishmash of genres and mechanics coming together into an addictive gameplay loop. For a rough idea, imagine XCOM 2 with a fantasy theme and much deeper character development.

There are really three different types of game in here:

The foundation for a Wildermyth campaign is the world map. You have to scout, find resources, build defenses, and eventually you have to get your team to its goal.

Of course, the baddies aren’t just going to let you do that. Everything you do on the world map takes time, measured in days, and your enemies will be spinning out their own plans during that time. There are regular Calamities that make combat deadlier by making monsters more powerful, more numerous, or introducing all new enemies to the mix. Also, once in a while you’ll have to deal with an Incursion, where a large force of enemies starts laying waste to your lands. You can face them head-on (dangerous), or build defenses to stop them in their tracks (time-consuming).

Naturally, you’ll want to claim as much of the map as possible to get more resources and hopefully find powerful artifacts along the way. But, if you take too long, you might find that your enemies have gotten too tough to handle. 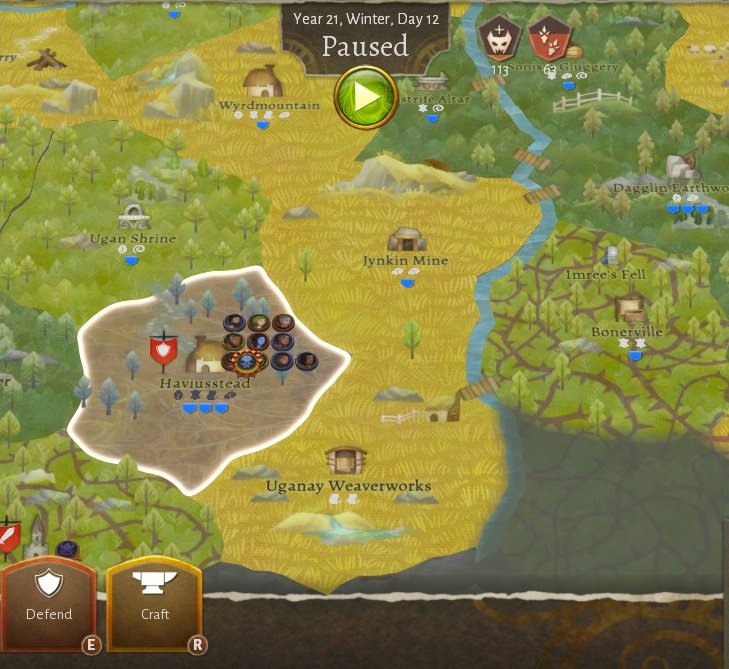 The world map lets you see the state of your campaign at a glance. Here, my entire squad has gathered to repel an enemy Incursion.

A quick note: Once you get the hang of it, I’d recommend switching the world map to 2x speed. Otherwise this part can feel a bit drawn-out while you wait for something to happen.

The meat of Wildermyth’s gameplay is the combat. It’s a turn-based tactical style similar to Fire Emblem or XCOM. This part of the game is solid, if not exceptional, and mechanics are probably mostly things you’ve seen before: obstacles can provide cover, flanking attacks make you more likely to hit, and standing next to an ally makes both of you harder to hurt. If you’ve ever played a squad tactics game, you’ll get a handle on Wildermyth’s combat mechanics very quickly.

Where this part of the game really shines is in the variety of character builds you can make. There are only three classes (Warrior, Hunter, and Mystic) but an impressive number of skills for each class. Do you want your Mystic to specialize in elemental magic or nature magic? Or maybe you’d rather have one who channels magic through a weapon to hit harder than a Warrior? Will you use an axe for armor shredding, or a dueling sword for higher crit chance?

You can also bring up to five characters into standard battles, so no two parties will be quite the same. 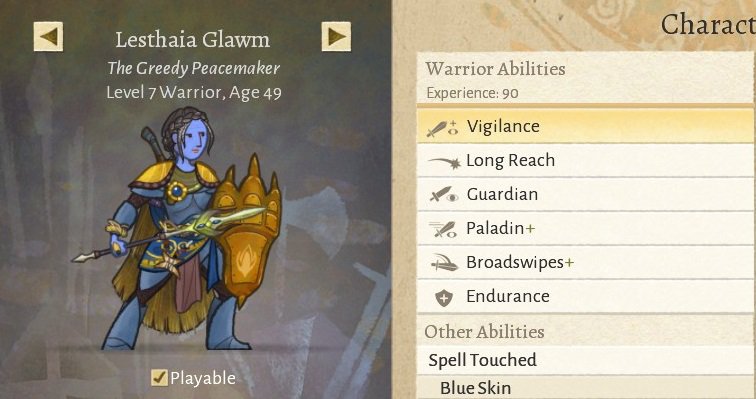 For example: Meet Lesthaia, the best character I’ve ever made. She can automatically counterattack multiple times per turn, hit enemies up to three tiles away, and every time she attacks she also hits every other enemy she can reach. This lady’s back must hurt from carrying so many campaigns.

Before and after each battle the game will treat you to a short cutscene in the style of a visual novel. You’ll see your characters chatting, preparing for battle or dealing with the fallout of it, and stumbling into the many weird situations that Wildermyth throws your way—frog head transformation, anyone?

These scenes can range from absurd to touching, and some are downright stressful. The choices you make often affect the battle to come, either by slightly changing your party’s tactics or by giving your characters some type of bonus (or penalty).

You can skip these scenes if you want to get right to the action, but in my opinion they’re well worth reading. On top of the outside events, your characters interact with each other. They can become friends, lovers, or rivals, all of which also affect how they interact in combat.

Pro tip: Wildermyth also works as a fanfic generator!
(My editor is going to kill me)

First of all, the magic: Wildermyth has one of the most original magic systems I’ve seen in a game. Instead of just throwing around fireballs and lighting, Mystics have an ability called Interfuse where they connect with objects around the battlefield to produce various effects. If you’re linked with a lamp, you can damage it to produce a blinding flash of light; if you’re linked with a fire, you can move it around to attack your enemies.

Finally, you can see through anything you’ve got Interfused, so it’s also extremely useful for scouting and area control. Just beware: Some of your enemies can do it too! 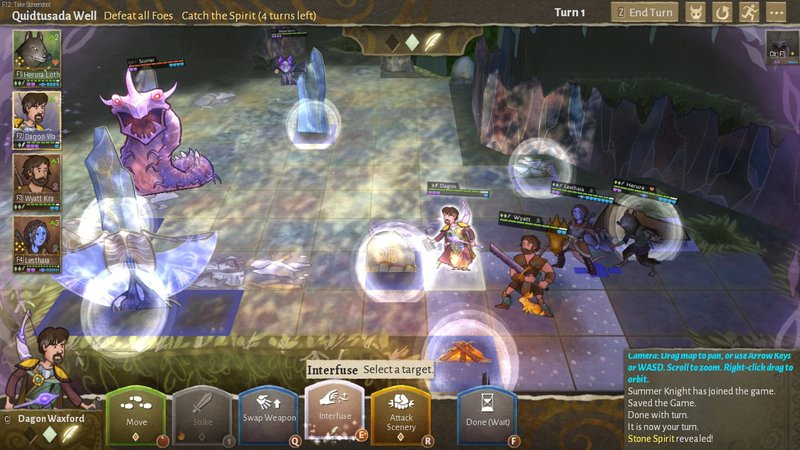 Second—since Wildermyth is a roguelite, after all—there has to be a way to carry over some progress from one campaign to another. Wildermyth does this through your Legacy, where the game saves your characters and lets you use them in later campaigns. The more campaigns a character gets through, the higher a level you can hire them at (hiring a high-level character is more expensive, but well worth the cost).

So, if you happen to find a build that’s exceptionally powerful, you can keep using it in later campaigns without having to worry about lucking into the right advancement options again. Or, if you put yourself/your friends into your game, you can keep leveling them up and make them regular fixtures in your campaigns.

You can also choose not to add certain characters to your Legacy, as well as remove them at any time, so don’t worry about getting stuck with lackluster builds. 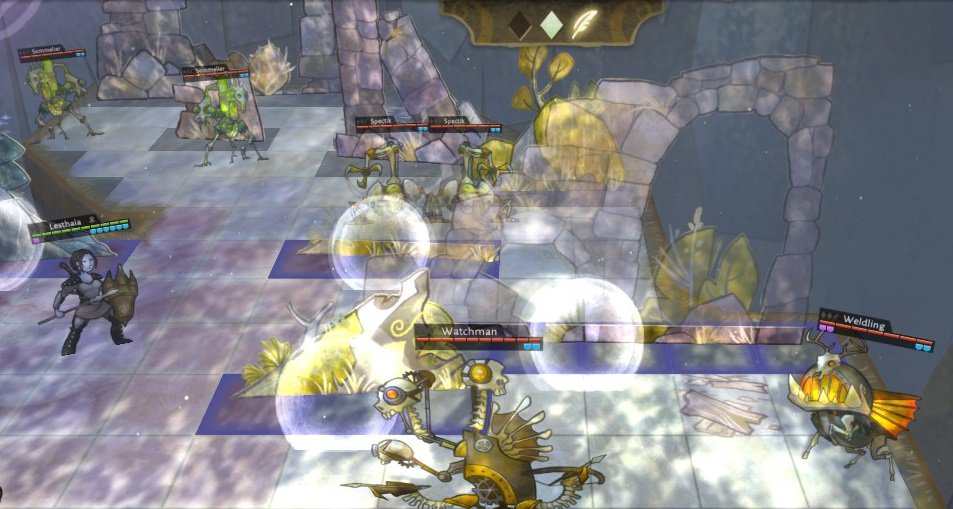 For all of its great qualities (and there are a lot), Wildermyth does have a couple of issues.

First and foremost, after playing a few campaigns (or failing the same campaign several times… ask me how I know…) you’ll find that you’re running into a lot of the same random events. I can’t tell you how many times I’ve had to rescue a village from a giant corrupted bear called The Great One. This is a problem with any roguelike that doesn’t have a massive studio churning out events, but it’s especially noticeable in such a story-driven game.

Second, the combat hotkeys shuffle around depending on what abilities your character has on hand, and not all of them make you confirm before the action goes off. If you’re not careful you can find yourself Withdrawing instead of Interfusing, or lighting a torch instead of going into stealth. There’s nothing quite as frustrating as having a whole battle go sideways because you accidentally opened a door when you meant to prepare an ambush.

Finally, the camera is semi-fixed. You can move it around and rotate it a little bit, but not all the way around. Sometimes, especially in a crowded battle, that makes it hard to see the space you want to click on—or, worse, leads to clicking on the wrong thing. 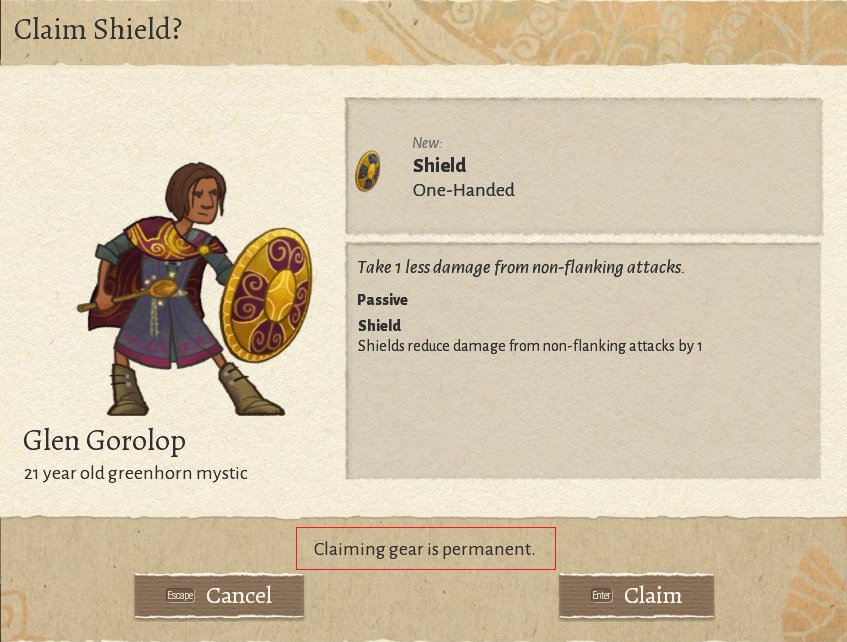 Also, there’s no way to trade items between party members. The devs say they didn’t want players to have to deal with inventory management, but I suspect it’s because it would have been too easy to make overpowered characters.

There’s an elephant in the room right now, and it’s Wildermyth’s art. I haven’t brought it up yet because, to this day, I’m not totally sure how I feel about it. The Pendragon-ish paper-cutout art style is certainly well done and bursting with personality, but it’s just not to my personal taste. On the other hand, I’ve beaten all five of Wildermyth’s story campaigns and I keep wanting to go back to work on my Legacy, so the art style clearly wasn’t a deal breaker.

The same goes for the writing style. Wildermyth’s writing has a ton of personality and a penchant for making up words by mashing other words together. It’s prose, but borders on poetry sometimes, and really adds to the experience… for a while. After a couple dozen hours I got sick of reading about shimmersweet water and coldbright stars.

…Oh, Wildermyth = “wilderness myth.” I just got that.

I’m also putting the coop multiplayer mode in this section simply because I haven’t had anyone to try it out with.

Caught in the Gameplay Loop

Wildermyth quickly became a darling of indie gaming, and it’s easy to see why.

No one part of Wildermyth really stands out above other games, but the solid area control and resource management mechanics, challenging tactical combat, and compelling RPG elements combine into a whole that’s much more than the sum of its parts. Each part of Wildermyth feeds into the others to create a compelling (which is a polite way of saying “addictive”) gameplay loop that’ll keep you coming back to build your perfect Legacy.

Plus bonus points for style, even if not every artistic choice is quite to my taste. 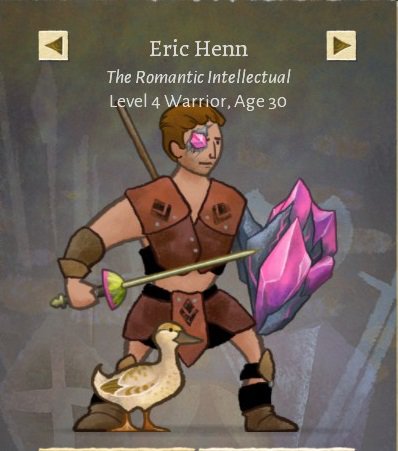 This looked more like me before he started turning into a rock monster, but the bonuses were too good to pass up.

With a list price of $24.99 and each campaign taking a solid 5-10 hours (not counting restarts…so many restarts…), Wildermyth is a bargain even at full price. If I haven’t made it clear already, I highly recommend it. It could be a fun distraction for you for a single play... or maybe you'll end up like me, trying to see just how many of my characters I can turn into monsters. Trust me, its addictive to turn your friends into werewolves.