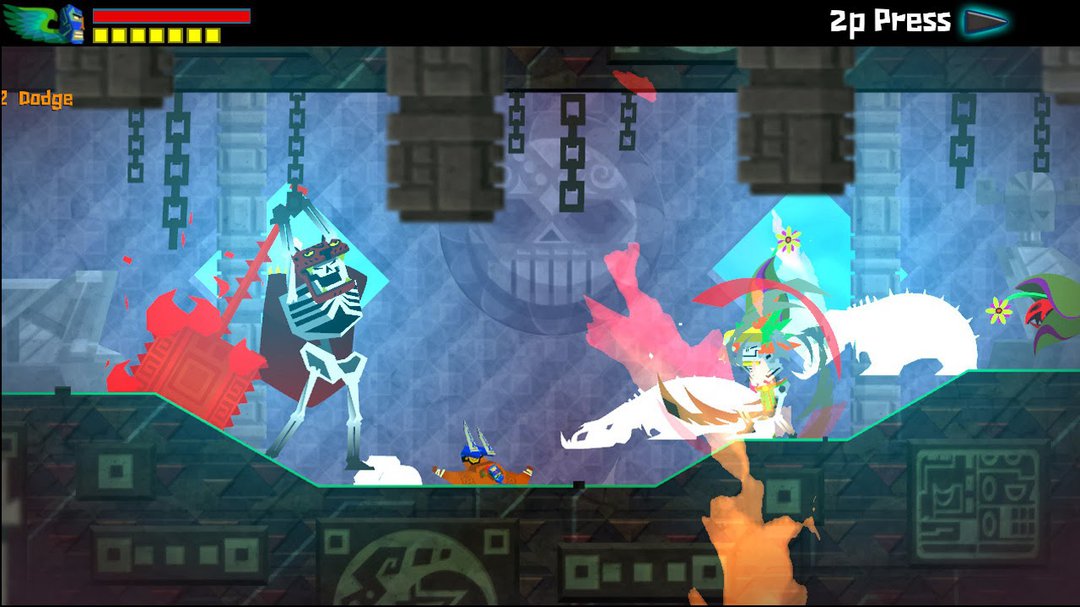 It's a shame that I missed Guacamelee! when it released last April, especially because it was the first game I ever wrote about on this site. The fact that this is an excellently crafted Metroidvainia chock full of clever humor, beautiful animation, and satisfying sound design makes it a crime that I haven't played this sooner. 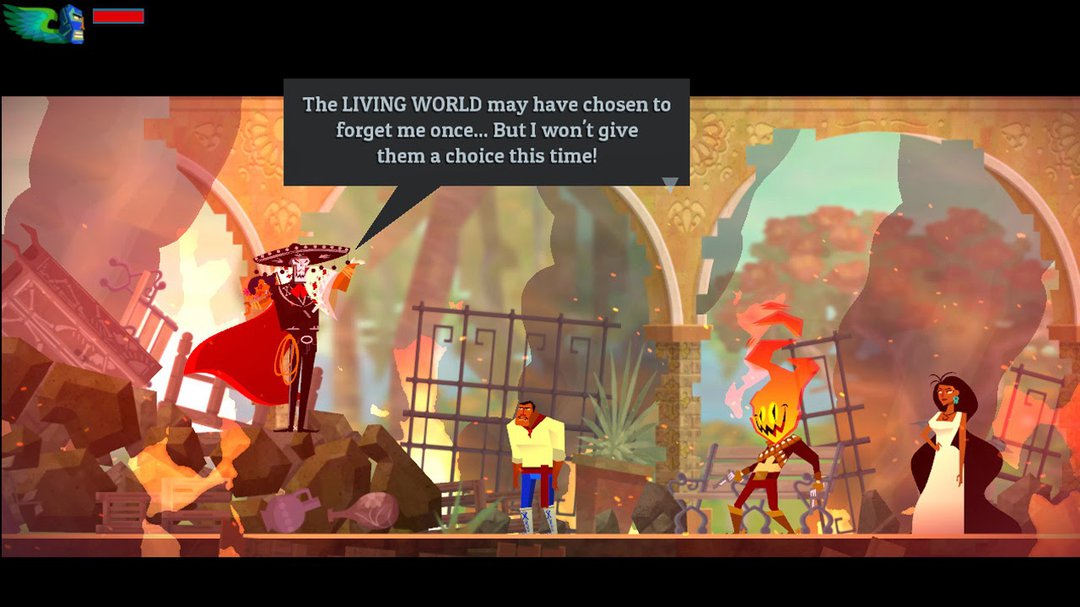 Flame Face (actual character name) is one of my favorite characters to look at when fully animated.

Guacamelee! is a beautiful game. Its bright and colorful color palette is complemented by smooth animations and interesting character designs. Backgrounds and enemies give off a pleasant glow. Lightning casts shadows on glowing platforms. Character animations are fluid and satisfying, and their designs are a joy to admire. It feels good just to run around the world, dodging and punching in random directions, just to admire the quality of animation. I actually preferred the co-op player's design (Tostada) so much to the man character's (Juan) that I played the entire game as her (though, I couldn't resist playing as Samus for at least a little while). Like I said back at PAX, the animation, facial expressions, and talking animals remind me of Disney's The Emperor's New Groove, and that's a good thing. This shines through in its humor as well.

Often self-aware, Guacamelee!'s humor stands out because it knows it's a game, and accepts that fact completely. The story is ripped right from Mario's book: El Presidente's Daughter is kidnapped by the bad guy, and it's up to the hero to jump and punch his way to the final boss and save the day. That isn't to say this game isn't unique: among the mounds and mounds of references, there's a very distinct world built up here. From the music to the level designs to the character designs, everything just fits, bringing the player to a place they've never been before while still being in the comfortable context of a game. 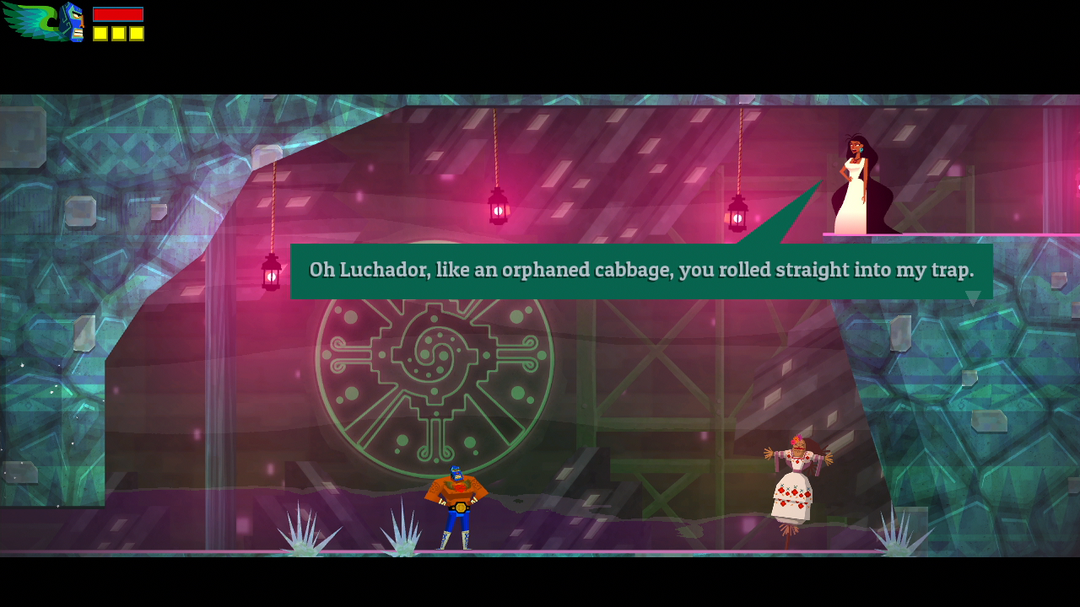 There is no hand-holding in Guacamelee!, and that's one of its best features. It's hard to make a well-paced Metroidvania, something Guacamelee! exceeds in. What's a power up if it doesn't make the player feel powerful? Every power up feels necessary, making the player feel powerful, but not overpowered. This is because the levels are designed very particularly around power ups, which forces the player to use them to their full extent. There are no signs telling you exactly how a power works, but it is inherently clear through the level design how it should be used. An uppercut isn't just an uppercut, it's a way to reach higher platforms. What's even greater is that every power continues to be important throughout the course of the game. Just because you've learned a new power doesn't mean the old ones will be ignored in the level design to make the new one feel important. Instead, you'll be using all of them at once. There is one hidden area in particular near the end of the game that makes use of every single power, and while it is extremely challenging, being able to wall-jump, world-switch, and wall-run through an area in rapid succession is extremely satisfying.

These powers aren't limited to navigating the world, either. As mentioned before, the uppercut doubles as a platforming tool, as does the dash kick (or, the "Dashing Derpderp"). Even when morphed into a chicken, there's still the option to punch enemies in the shins. All of these power ups combined make for a challenging, yet not very frustrating combat system. Certain powers have the ability to take down certain shields. Different enemies will only be attackable in either the world of the living or the dead, so dodging and world-switching mid-battle is a necessity. There's also no hand-holding here; The only explicit combat instructions come from training at Combo Chicken's Gym. Even then, the combos you learn there are very difficult to pull off. Unlike most tutorials, you can also keep coming back to the gym every time you learn new powers. Keeping in line with the rest of the game, it's not about teaching you the basics, but instead teaching you how to excel within the game's established mechanics. 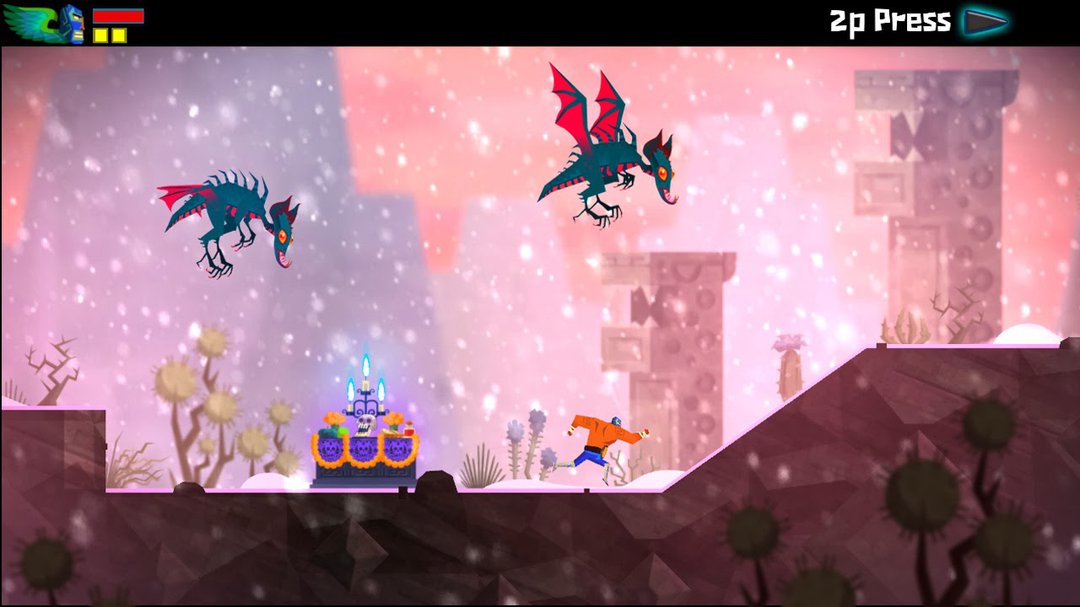 While completing the game is a bit of a challenge, it doesn't require complete mastery of the mechanics to complete. El Diablo's Domain, a DLC pack released back in July, fixes that problem (while also adding more costumes!). This DLC added a series of challenge levels that weren't confined to making sure every player could pass them. While I'm not personally a fan of time trials, I did enjoy pushing my abilities as much as possible to complete some of these challenges. Now that it's packed in with Guacamelee! Gold Edition, it's just an awesome bonus to those of us who couldn't get enough after beating the game.

It's also worth mentioning that you can play through the entirety of Guacamelee in drop-in Co-op mode. While I didn't get a chance to play this mode in the full release, I did do so at PAX. As far as I know, the game doesn't really change much with a second player, but it seems like a good way to enjoy it with a friend if that's your thing.

Guacamelee! is my favorite Metroidvania to come out in years. It drew me in with its fantastic animation, and its humor and challenging gameplay kept me going until the end. We've seen this type of game done plenty of times before, but Guacamelee! respects us as players by giving us a challenge instead of teaching us how Metroidvanias work for the umpteenth time. If this is the kind of quality that comes out of Drinkbox Studios games, I'll be eagerly waiting their next release.

All screenshots taken directly from http://guacamelee.com/.