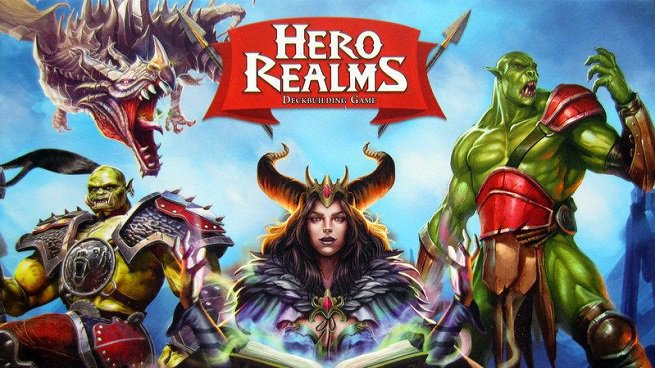 White Wizard games is a company that did what all good companies do: find a hole in an established market, and fill it. When they first created Star Realms, their first card game, it was a surprise success; it took the deck-building genre and made it more direct and confrontational. They made a game that was inexpensive, easily accessible, and fun to play.

After a break working on other projects, White Wizard is back to take their second pass on their flagship idea in the form of Hero Realms. A spiritual sequel, this high-fantasy themed card game combines the dueling of Magic: The Gathering with the deck building style of Ascension. Sometimes, games that are made to be hybrids feel flat, but Hero Realms does not: if anything, its aggressive and speedy combat is sometimes faster than the players can keep up with.

The Gameplay: Deck-Building For Murder

Anyone that has played a deck-building game will be familiar with the formula: you start off with a deck of ten cards, which is mostly made up of starter economy cards. There is a center row where you (and everyone else) can purchase new cards, with the hope of improving your deck faster than your opponents to win. Deck-building hinges on the concept of creating synergy: purchasing the right cards that work well together to get stronger benefits. Everyone’s deck is going to have some great cards, but if you are able to take advantage of your cards more reliably than others, you have a massive advantage. 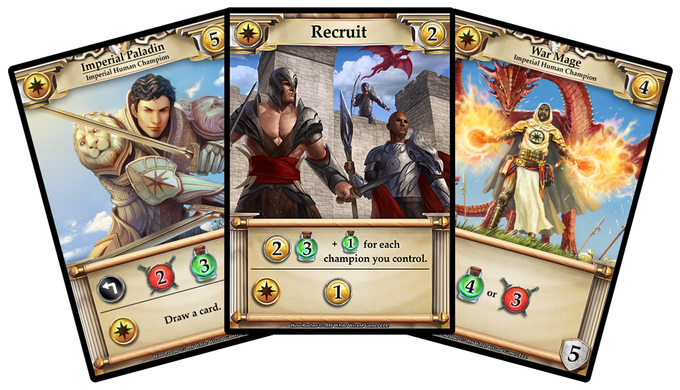 There are four factions in Hero Realms: The Imperial faction is all about life gain, and outlasting your foe.

Hero Realms (and its predecessor) twist the formula to make the format more aggressive. Typically, deck-builders have you interact minimally with your opponents, instead focusing on an abstract goal of victory points to measure success by. Hero Realms gives each player 50 life points, and expects you to make sure your opponent(s) will end up with zero. The point isn’t to collect points, but cards that will inflict as much damage as possible.

Almost every card you can collect feels incredibly powerful, and that’s because most have ways to chain to become even stronger. This is in part because of the ally ability which White Wizard bases their games on: if you already are playing a red card during your turn, playing another will allow both cards to use a secondary ability they have listed. This can be anything from card draw to extra cash, or just a heaping amount of new damage.

There are also champions, which are cards that can stay out turn after turn to repeat their effects, or at least deflect damage from you to them. These champions also trigger ally abilities, helping cause even more chain reactions. This works right alongside how the right cards together already synergize: collecting multiple green cards can help you force your opponents to discard their hand, while several yellow cards become stronger by how many champions you have in play.

This is a game all about making combinations that work, and rewarding you for your effort. It helps that the reward is crushing your enemies, and driving them before you.

Hero Realms is at its best when you first see that fifteen or twenty point swing of damage fly across the table, and when that happens only a few rounds into the game.

Numbers fly fast and often in Hero Realms: only four turns in, you might have the chance to deal ten points of damage in just one round. Conversely, your opponent might find ways to heal twelve or more. I’ve played multiple games where I’ve been able to pound my foe by half their life in two rounds, and I start to feel guilty for seeming to have drafted better cards. That’s typically when the same foe smiles at me, and shatters my defenses while hitting me just as hard. 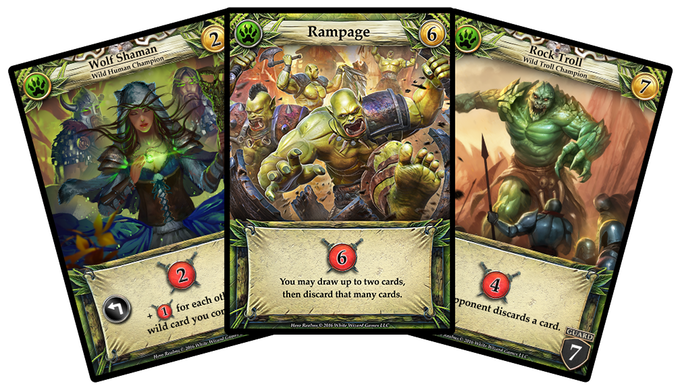 Green cards illustrate the Wild faction, which loves heavy damage and forcing discarding on your enemies.

Eric likes to joke that in White Wizard games, every card is overpowered, so nothing is. Every attack card can be powerful, and every special effect like card draw or discard can twist everything upside down. It might actually be startling at first, but it’s also very refreshing. I’ve found myself trying to figure out if one color in the game is more powerful than the other, but it’s near impossible to tell because I’ve seen a color deck of each type crush the others in one game or another. This feeling that the game is super charged lets me just relax, play a round or two, and not feel as if I’ve been jilted if I lose.

It also helps that games are very quick in comparison to other deck builders. Two player matches in this game are obscenely fast, where there’s no need to be subtle. You will lose or win by managing to play a finishing blow right before your adversary can finish off your last few life points. You will have games that are done in ten minutes, so there’s no time for sore feelings as you shuffle up and prepare for the next round.

Games with three or four players (you can put together boxes to make even larger games!) tend to need a little more finesse, but that’s fun as well. I’ve actually found that people are unwilling to dogpile one person right out the gate; because Hero Realms ramps up so quickly, leaving one opponent alone to focus might let them build up an advantage you can’t conquer. While these games are longer, I haven’t played one longer than an hour. 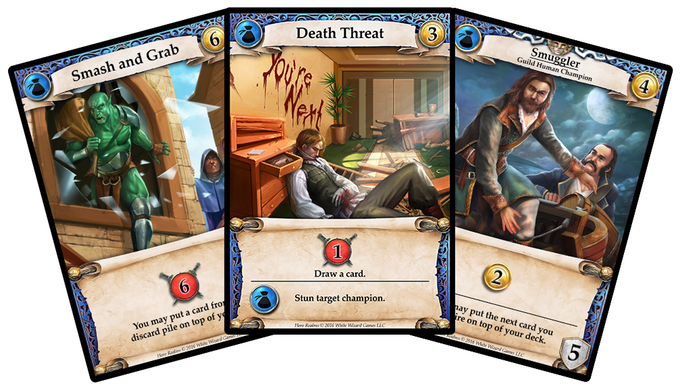 The Guild faction are the craftiest of the bunch. They love money and acquisition, while also letting you outright remove champions from the field.

Finally, one of the best things about the game is how much it does with so little. For only twenty dollars, being able to play a deck-building game that feels as comprehensive and complete as Hero Realms is unheard of. The art is solid standard fantasy, and the box it comes in is compact and durable. It’s so easy to throw into my game bag to bring out to a friend’s house or the bar.

The Nitpicks: Does It Go Far Enough?

To be quite blunt, Hero Realms really doesn’t have a lot to be negative about. It’s a simple and streamlined deck builder; it was built with a specific goal in mind, and it does that as quickly and effectively as possible.

With that in mind, Hero Realms might not be the perfect pick for particular players. This is a great game for a bar board game night, but perhaps not ideal to bring out when you have a room full of super competitive gamers. This is a game that thrives on being fun, fast, and without hard feelings between rounds. Similarly, there are board game fans that enjoy deliberating every move, and like games with as little luck as possible. Some players might wish there was more overt strategizing like in european deck builders like Dominion. This is a game that sacrifices perfect balance to create a game that’s meant to play fast, and while that comes with many advantages, this means Hero Realms might not be the game you want to build your board game night around if most want a long game. 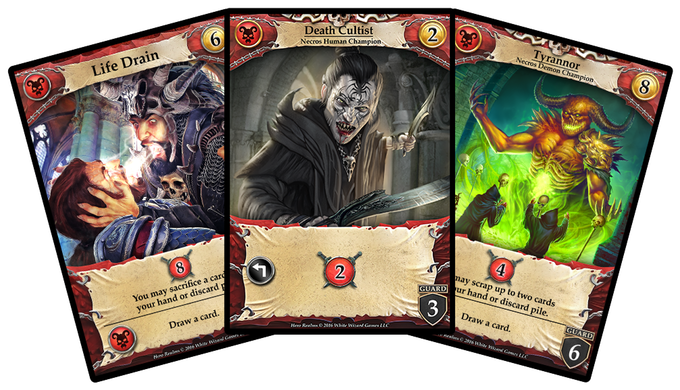 Red cards are the Necros faction, and they love raw damage. They also let you thin out your deck, which is a very powerful trick.

Some will ask if it has gone far enough to differentiate itself from Star Realms that came before it. To be sure, the art is crisper and the mechanics feel cleaner, but you can argue that this is just a sequel with a new thematic skin. While that doesn’t bother me, especially because I enjoy high fantasy, those of you who enjoy space faring and already have Star Realms might feel happy with what you already have.

I love Hero Realms; it is always in my backpack when I go out to a friend’s house. It’s affordable, it’s easy to transport, and it’s fun. While I enjoy playing deep, introspective, hours-long games, Hero Realms is infinitely more accessible and approachable. It’s fun to pull out at the end of a game night, or while you are waiting for the rest of the crew to arrive.

Something worth noting is that while Hero Realms can feel like a no frills deckbuilder, White Wizard has remedied that in expansions that change up the formula. The first set of expansions allow you to add character classes to the game, where players can choose a differently themed starter deck with individual powers. The newest expansion adds a co-operative element, where players work together to fight a campaign. We will be writing a follow up covering these more in depth, but these expansions are a fantastic way to take a fun base game and style it more to what you are looking for.

Hero Realms is a perfect game for you if you enjoy games such as Magic: The Gathering or Hearthstone, but don’t want to worry about the random draw of card pack purchases. It’s become my gateway game of choice to introduce people to deck building. Accessible, affordable, and fun – what more can you ask for? Hero Realms is worth adding to your collection.