Deeper Into The Woods You Go 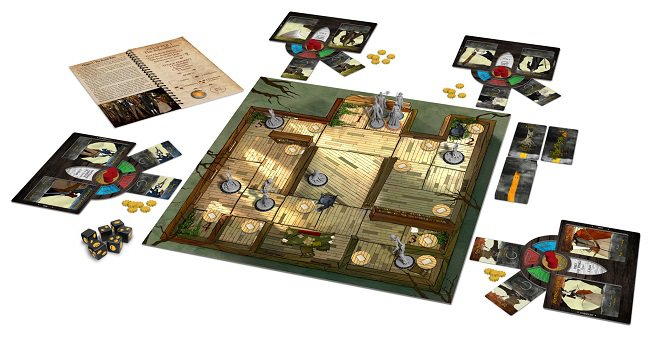 While you were growing up, did you ever watch the animated story of Ichabod Crane? Were you enchanted – and also terrified – hearing these old folk tales of New England?

In an era of modern day slasher movies, technological horror, and a zombie-themed version of everything, it’s easy to forget that America has some great old legends that were created before Stephen King and George Romero. Fortunately, Greater Than Games is here to help bring back that old America charm. Legends Of Sleepy Hollow is a board game made to give you a story-filled experience, and at first look, it doesn’t disappoint.

Playing With History And Folklore

Legends of Sleepy Hollow puts you in the shoes of four heroes that are determined to discover what exactly has happened to Ichabod Crane. At the end of the original Washington Irving short story, Ichabod was never actually killed: only his hat was found, next to a smashed pumpkin. The board game picks up the tale at this point – it decides that monsters such as the Headless Horsemen could be real, along with other terrors that the deep woods might hide.

This is a game based around story, and that is one of the greatest selling points of Sleepy Hollow. Greater Than Games is promoting that the boxed game comes with eight chapters, or individual games. As you play through the game as this band of four heroes, you will progress through the chapters to fight greater foes and more intricate mechanics. 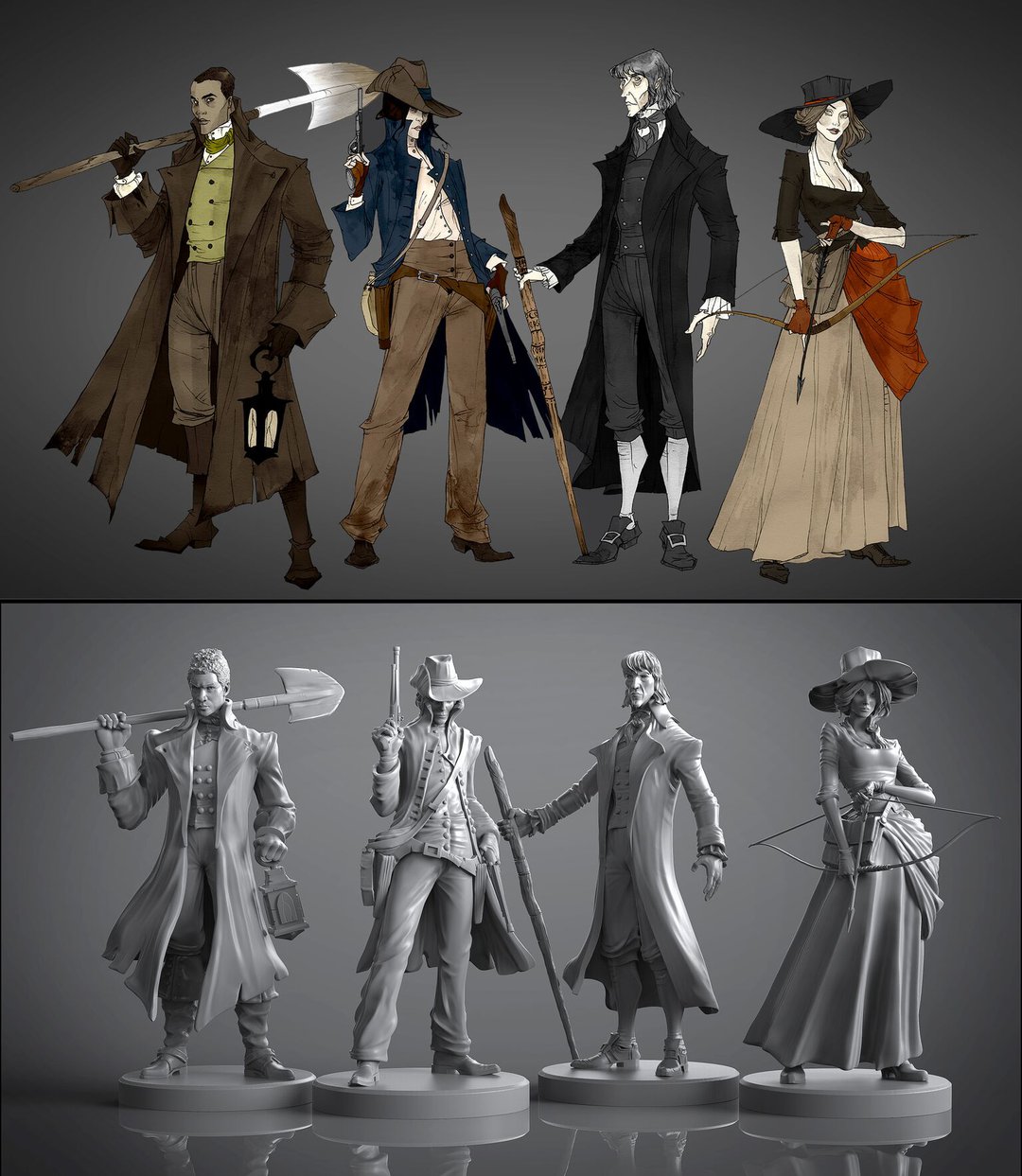 The four heroes: Jeramiah the Undertaker, Matthias the War Veteran, Elijah the Priest, and Emily Van Winkle the Tanner

We were sent a prototype, which included a full playthrough of the first chapter, including the story points. This first game did a great job letting us know what is to expect in terms of tone. Creeping monsters, made of sentient dead trees and pumpkin heads, shambling into a schoolhouse slowly being devoured by the dark wood itself; it had a spooky charm, letting you enjoy the darker tone without becoming outright horror. The clips of story that you read outloud, both at the start of the game, as you completed objectives, then managed victory, were meant to engross you to find out more as this first chapter closed.

A round in Legends of Sleepy Hollow is played by allocating an action (interacting with the environment, resting, or attacking) to each of the four heroes, as well as letting them move. Then, the game board gives the monsters to respond according to the chapter you are playing. It’s a simple system, but one that comes with a lot of fun adjustments. Greater Than Games works hard to make their game mechanics mix well with the theme and atmosphere they are trying to create; Sleepy Hollow is no exception. 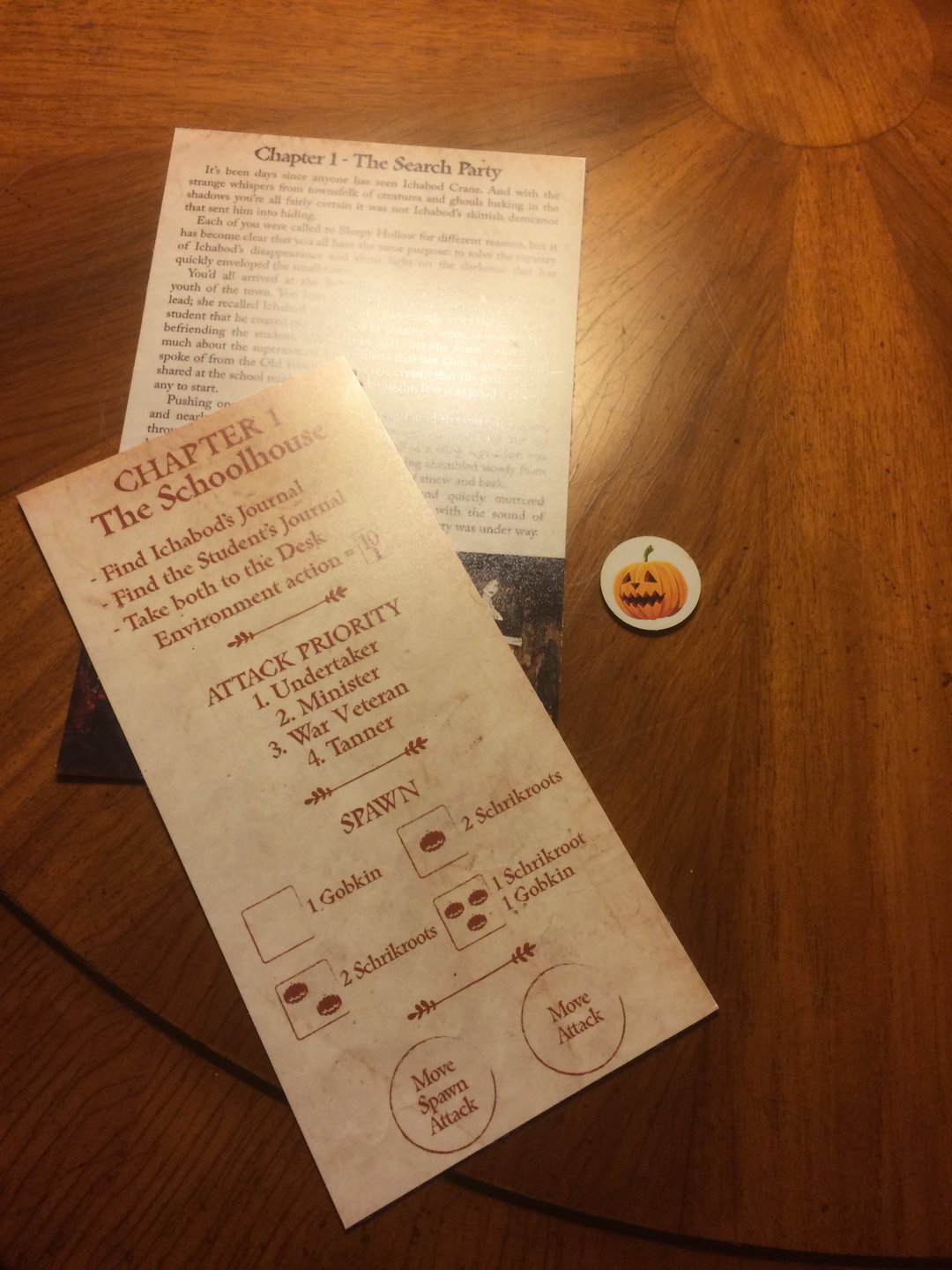 The first thing to keep in mind is how each chapter has the potential to change how the monsters act fundamentally. As shown above, the foes that slowly inhabited and crept into the schoolhouse we were investigating worked in a particular way: one round they would move and attack, and then the next they would also spawn new ones, as determined by dice rolls and points of access on the map. It gave us as heroes a chance to try and finish off what was nearby, but every other round, more could appear. Our ranged expert, Emily Van Winkle, got a nasty bite as a monster spawned on top of her, attacking before we could even react. From what we saw, each chapter can have its own spawn pool and its own actions to prioritize.

The second way Sleepy Hollow makes actions more interesting is in the heroes: once you play an action on a particular slot, you can no longer use that action until you run out of spaces to place tokens, and then your choices reset again. Our four player game found out this is why Fear is interesting in the game: being attacked, even if you survive it, will force fake action tokens into your pool that you have to use. They force characters to skip valuable actions, unless you use the rest actions (Or the priest) effectively.

This doesn’t keep in mind how each chapter might have a different set of objectives to juggle. The first chapter had us finding documents, which could either spawn more creatures or give us an item to use. After bringing the documents to a location, we triggered the real end goal of that game by reading a story card, and opening an envelope. In this way, story chapters have an aspect to them reminiscent of Pandemic: Legacy, but there is no ripping up of cards or permanent changes to the board itself. Instead, it call comes down to the revealing of story, and new objectives. By the end of our play through, I was genuinely impressed with how well Sleepy Hollow seems to add new content and challenges, and will continue to do so into later chapters.

Something that has blown my mind thinking about this is how over the course of eight chapters, there will be seven distinct maps that you will play on. By the end of our chapter one game attempts, we became familiar with the Schoolhouse and ways to use the map well. Now, because new boards will always be introduced, we have to stay on our toes: the capability for new surprises is renewed. Legacy style games often keep things fresh by constantly adding or removing things from one permanent board, but this is the first game I’ve played which changes the board altogether. 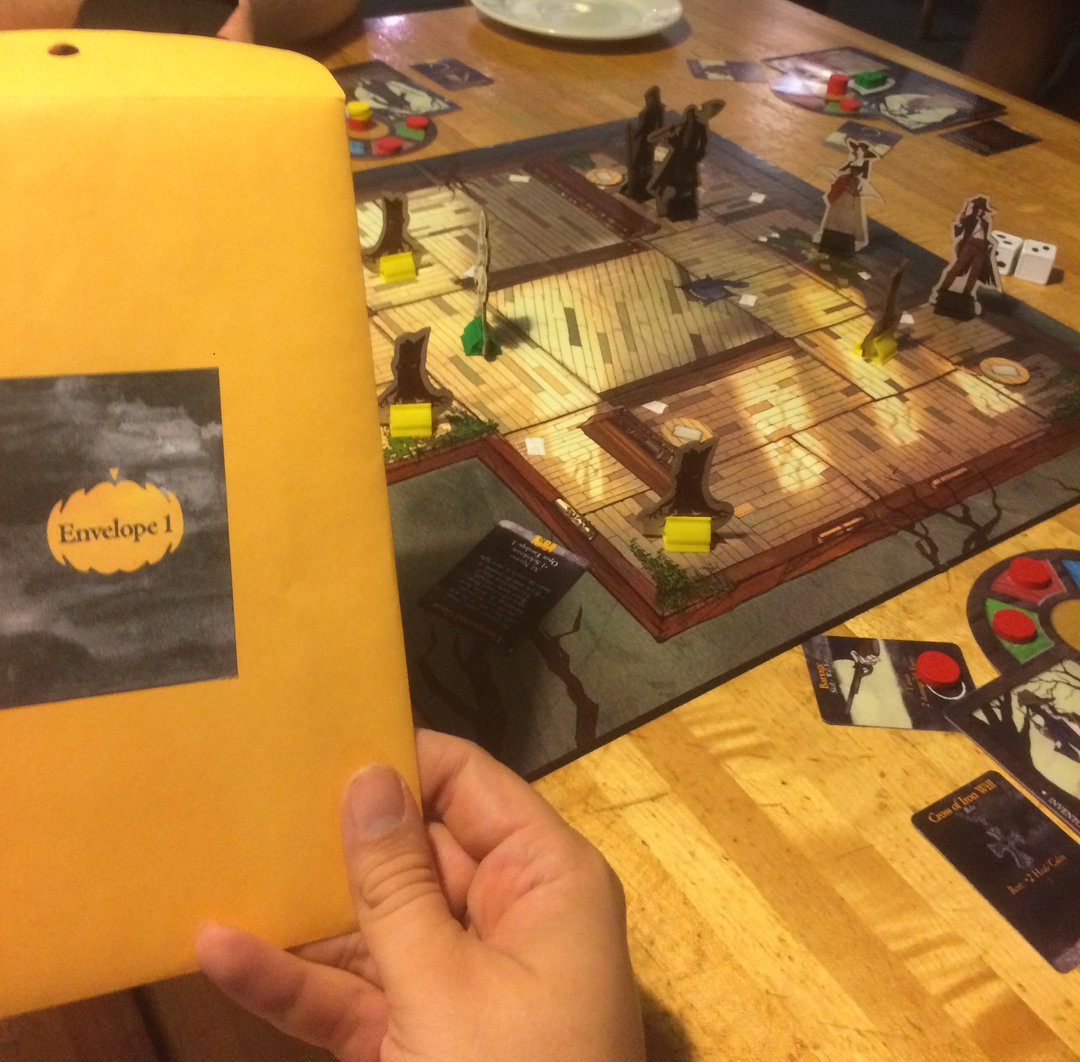 This game combines my love of Legacy games revealing details over time, alongside miniatures combat. Keep in mind, the final game will have full miniatures, not pop-up characters.

While this is a Kickstarter, we did have a chance to play through the entirety of chapter 1, including the reveal of new story, and how your characters will have a chance to level up and improve between episodes. I can safely say that the mechanically, Legends of Sleepy Hollow is not only sound, but has a lot of potential to grow as you complete chapters. The Kickstarter promises even more surprises to come, with divergent paths and more intricately challenging scenarios. It was truly fun to play, and I can imagine having a close group of friends marathoning this game for days.

If there is one cautionary note I would add, it is about price. The price during the Kickstarter campaign will $69, but a full release will instead be a whopping $100. That is a large amount to pay, especially if some interested gamers equate eight chapters to just eight (successful) games. However, it appears that Greater Than Games is approaching this game release as one meant to be a showstopper: the final characters will be cast in plastic miniatures with HP counters, the player boards will have recesses for keeping your cards and action points in place, and the box itself has been designed to open like a treasure chest!

Is this a Kickstarter worth backing? If you are a fan of story and plot, my answer would be a solid yes. The game is essentially promising to be a guided set of dungeon crawls, allowing you and your friends to focus on the playing of the actual game and having fun in the process. If you are a fan of games like Dungeons and Dragons, or have played story/legacy board games before, this is a game that is worth your attention and money. In addition, Greater Than Games has a history of completing Kickstarters well, thanks to their most recent success, Spirit Island. 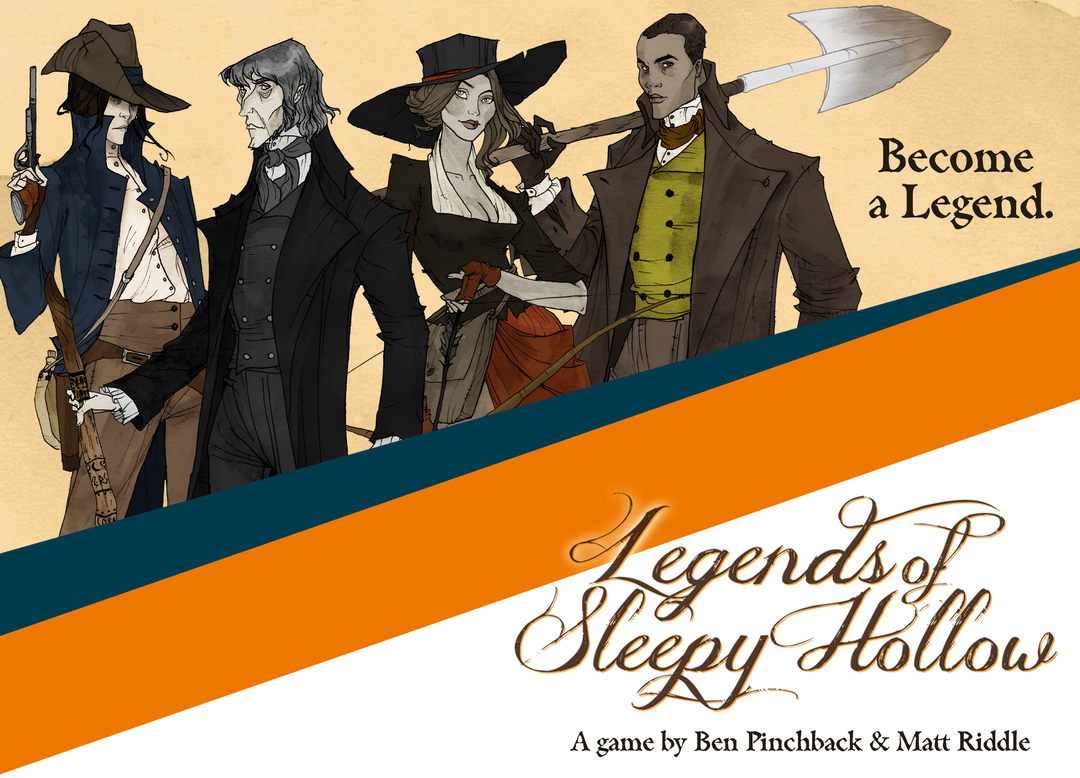 If you are a fan of jumping into games that spin their own tales, then I heartily suggest you take a look at the Kickstarter while it lasts: you have until November 10th to decide. For myself, I believe Legends of Sleepy Hollow has the potential to be one of the great story-based games in 2018, and you can expect me to eagerly be awaiting a copy to review next year.