Animus is a card drafting game developed independently by Ed Rodriguez (Zero Budget Geek on YouTube) where two players take control of cosmic Entities trying to conquer a fractured multiverse. I discovered Animus at the New Paltz Convention, a small convention run by a local college (started by our own editor-in-chief, Wyatt), where I met Ed and played against him. .

I found Animus interesting, with elements of games that I’d played before but not quite like any of them. Animus is pretty light, it plays quickly and I had a good time with it. Because of that, and in the interest of supporting a local game developer, I had no issues shelling out twenty dollars to pick up a copy of my own. 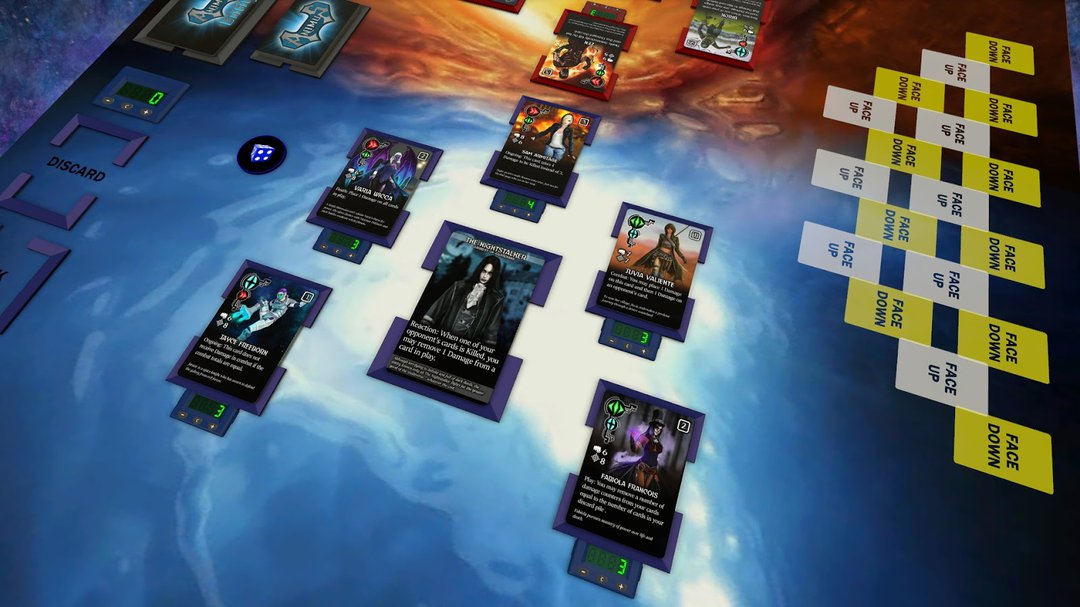 Animus Is To Pokemon What Epic Is To Magic: The Gathering

Animus uses a lot of the same ideas as the Pokemon TCG: positioning, attacking, and type advantages. It’s not quite the same, but similar enough to give a good idea of how Animus plays. Animus also has the added bonus of being totally self-contained, with no need to buy expansions or booster packs.

You have five spots that you can fill with your character cards: a Melee position, two Ranged positions, and two Support positions. The characters all have Melee and Ranged stats that show how good they are in each role, while the Support characters can’t attack or be attacked at all, and are only there for their card effects or to step in if one of the cards ahead of them is killed. 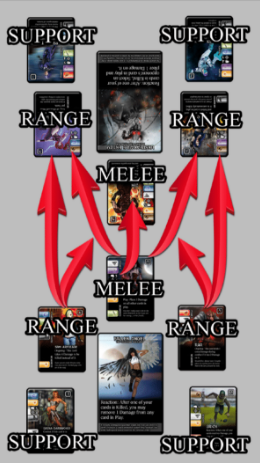 Combat itself is quite simple: you just declare who you are attacking with and your target. Each player then rolls a d6, adds the result to their character’s relevant stat (melee or range), and whoever has the higher total deals a damage. If you have a type advantage, instead you roll two dice and choose one to be your result.

The rest of the game doesn’t get much more complicated than that, either. Every character has a level from 1-3, and (with one exception) takes three damage to kill. Whichever player has ten levels’ worth of characters in their discard pile at the end of a turn loses. That’s basically it; really, the hardest part is remembering to apply all of your character and Entity effects.

The really interesting part of Animus is the drafting. Much like Epic, both players draft from a single deck of cards to create their personal decks. Since there are 36 character cards and only 18 are used in a game, it’s likely that you’ll keep finding at least one or two new heroes per game for a good while. The way the drafting works in Animus is pretty unique, though, and hard to explain without a picture: 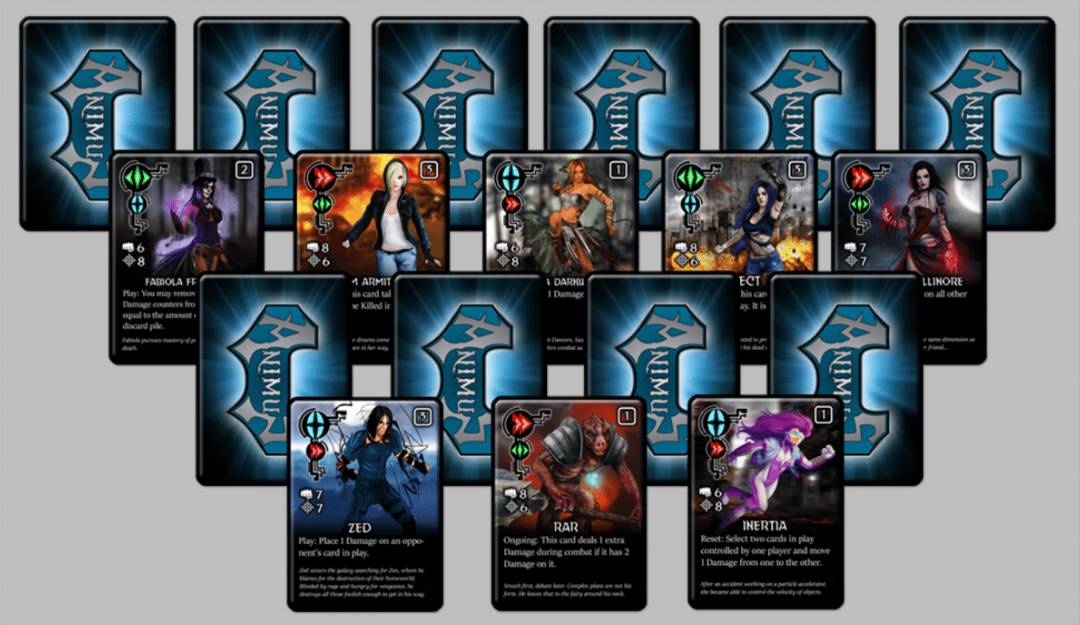 You can only draft a card if there are no cards on top of it. That means you have to consider not only what you want for your own deck, but what you might free up for your opponent. Also, you won’t know what the face down cards are until they’re available.

Overall, Animus is a light and fast card game - the box claims it can be played in 15 minutes, in my experience it’s in the 20-30 range, which is still pretty short. It runs on a mixture of strategy and luck that makes it a great choice for casual gamers, and the small box (not much bigger than a cell phone) means you can easily take it just about anywhere. Animus would fit right in at a game night at the local bar, or a club meetup.

Unfortunately, an indie game with a low price tag generally means that some sacrifices have to be made. The production quality of Animus is not great. The cards themselves are good, solid card stock, but the box is thin and flimsy, and the damage counters are cheap plastic. Also, the art is pretty reminiscent of Sentinels of the Multiverse - take that how you will.

However, my biggest issue is with the instruction booklet. Although it’s only seven pages long, the formatting often makes it difficult to find the particular rule you’re looking for. The text is small, and the wording is sometimes ambiguous. Overall, it just needs a solid rework by a good technical writer.

Overall, Animus is a fun little game. The small box and short playtime make it ideal to bring out for quick and casual play. While the production quality - particularly on the instruction book - could definitely be better, I don’t think it’s a deal breaker. Animus would also work well as a gateway to heavier drafting games like Inis. Animus may not be perfect, but it’s well worth the twenty bucks.

Oh, and did I mention that it’s free on Tabletop Simulator?