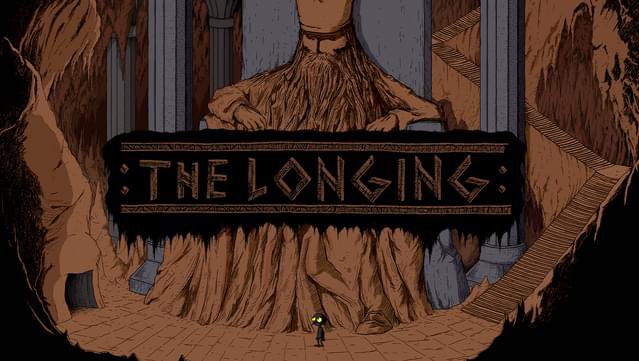 The Longing is an experimental exploration/idle game that may just be the longest game ever made, yet require the least play time to beat. Don't be fooled that this game this is sort of new Cookie Clicker or microtransactional game however; no no, the result is much, much weirder.

You play as a Shade, a spirit brought to life by an ancient magical being simply called the Old King. The King is about to enter Odinsleep rest and recover his powers, so that he can bring an end to all longing and suffering (or so he claims). He summons you just before falling asleep and tells you to wake him up in 400 days when his strength has returned. So, basically, you play as an alarm clock with feelings.

The thing you have to understand is that The Longing plays in real time. The time from when the Old King falls asleep to when you can wake him up is actually 400 days. However, that’s where the idle game mechanics come in - the timer will still count down when you’re not playing. 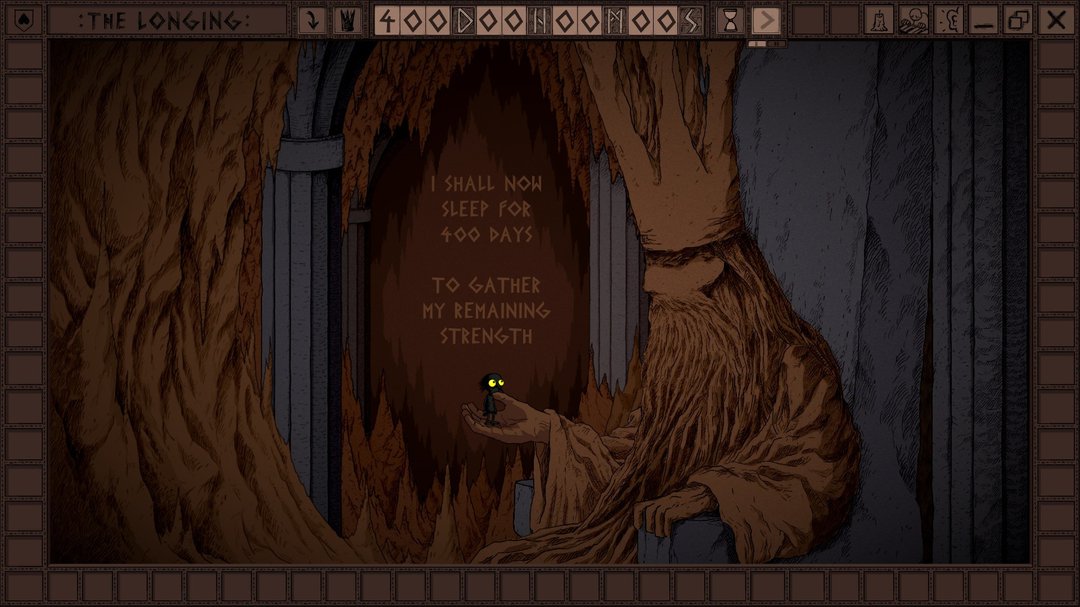 That's it. That's all the background you get.

That’s why I said The Longing is both the longest and shortest game ever; it’ll take you 400 days to beat no matter what, but you can just start the timer and then turn the game off until it’s time to wake up the King.

So, assuming you don’t just start the clock and walk away, what do you do for 400 days? It’s a tougher question than you’d think. Your one and only objective in The Longing is to wake up the Old King, so until Day 400 your time is your own. You’re the only living thing in the entire underground kingdom, and there’s no Netflix down there, so you have to find ways to entertain yourself.

Your Shade does have his own little home that you can spend time in. Coal is plentiful down there, and you can use it both for starting fires and drawing pictures. There’s also a bookshelf with a few books on it, and presumably you can find more scattered around the kingdom. 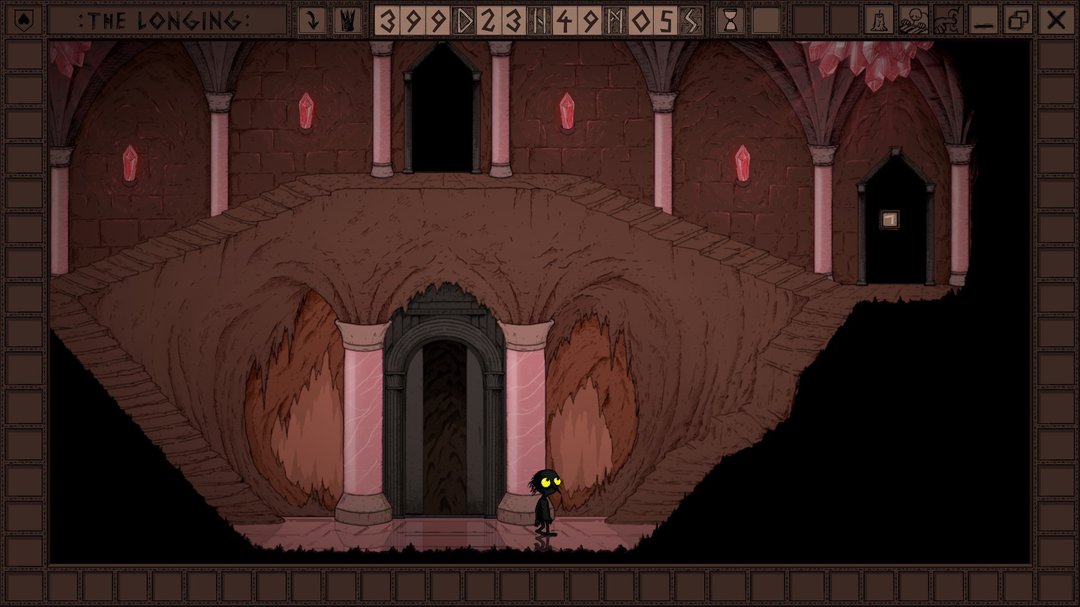 Some parts of the Old King's domain are actually quite beautiful. In a drab, mostly brown way.

Oh, and when I say books, I mean entire books. You can sit down and read Moby Dick if that’s how you want to spend a few days; they really coded all of that in there. However, most of what you’ll be doing is probably exploring. The Old King’s kingdom is vast and convoluted, and you can while away many hours wandering its caves and stairways. The exploration has also got a little bit of a Metroidvania feel to it, since more areas will open up as you progress in the game.

Of course, progress in The Longing has nothing to do with finding special abilities or hidden switches. Everything is based on time. Early on I found an area where there’s a fairly long fall with a patch of moss at the bottom. My Shade estimated that it would be about two weeks before the moss had grown enough to make the jump safe. If I want to see what’s past that point, I’ll have to come back once that time is up.

So What Exactly Is This Game?

Usually the big question in our game reviews here is whether or not the game is fun to play. This time, the answer is a resounding no: The Longing is not fun, not in any usual sense of the word. You point and click so that your Shade will slowly shuffle around the kingdom looking for things to stock your small house with. There is no challenge to overcome, no enemies to fight or skills to test. You don’t even need to eat or drink, so there’s no threat of death. The world itself feels like its purposefully turned down the color contrast to make it drab on top of everything else. There’s just you and your Shade in a vast, empty world.

What is it, then? The Longing is atmospheric, meditative, and strangely satisfying when you’re able to find something to improve your home with. Your Shade is oddly charming, he has a habit of talking to himself and an offbeat sense of humor that (slightly) staves off the loneliness. It’s more like an experience than a game in the traditional sense. 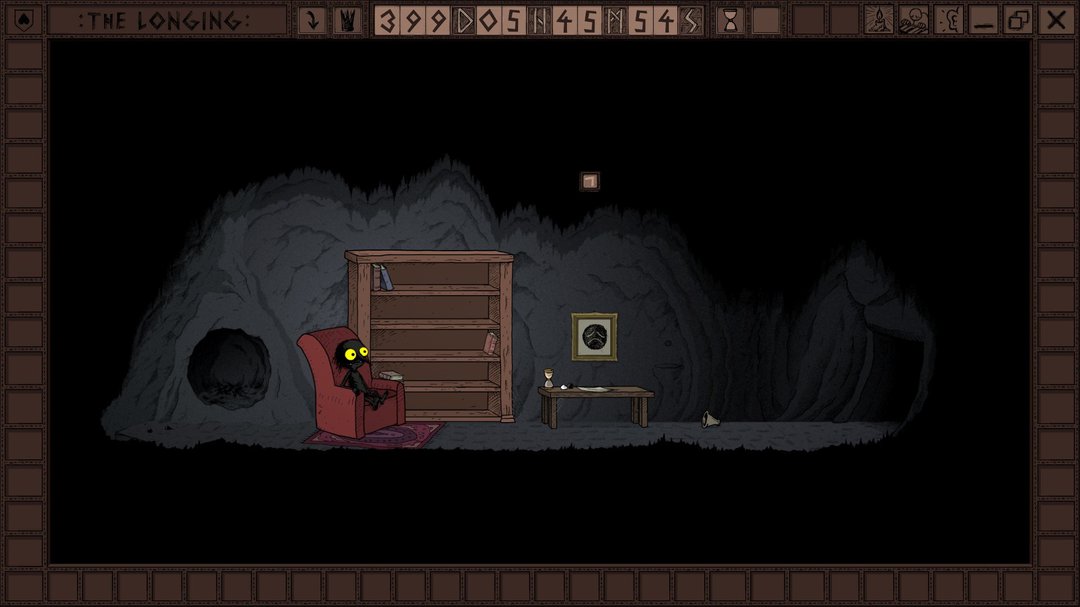 The other big question we usually like to answer is, “who is it for”? That’s another one that’s hard to answer with The Longing. Who would get the most out of this game?

If you’re into story and character driven games, then The Longing may be for you... though it’s hard to really call it either of those things. There’s only one character, (well, two, but one is asleep for most of it) and while there are hints of a story, nothing is really explained. I mean, who is the Old King? If he’s so powerful, then what happened to his kingdom? Where is everyone else? Maybe the answers live somewhere inside The Longing, but if so, I haven’t found them yet. Again, if I wanted to give you a full review where I had 'beaten' this game, I'd have to wait until April 9, 2021 to do so without cheating. There's even supposedly multiple endings!

The truth is that The Longing is what you make of it. You can spend many hours trying to uncover the mysteries of this world and finding ways to make your Shade’s long vigil a little more pleasant, or you can just pop back in 400 days later just to see how it all ends. With that said, if you’re planning on the second one, it may not be worth your $15. 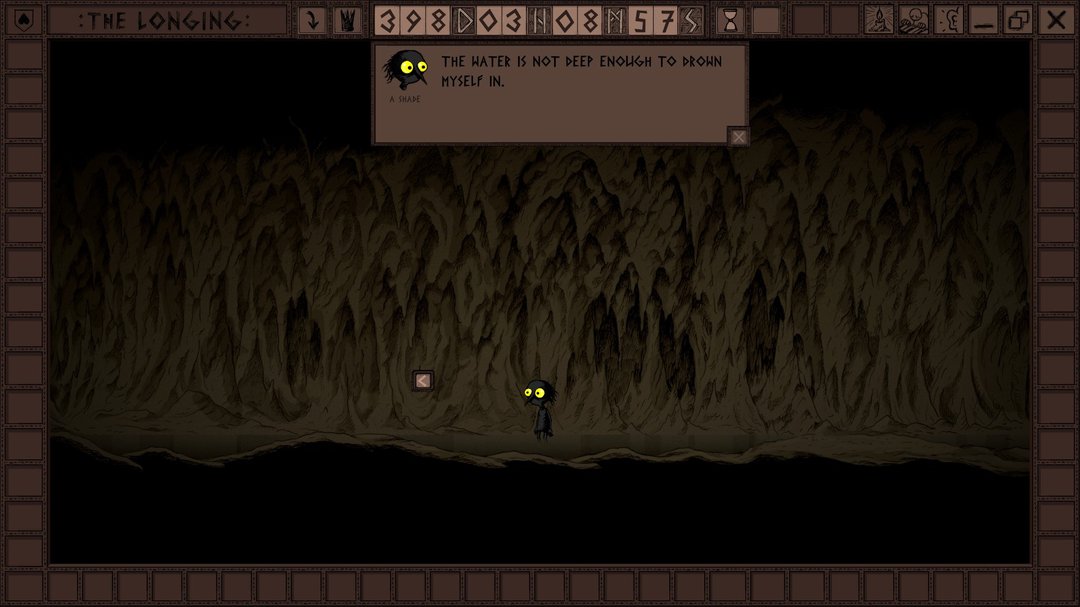 That kind of loneliness will get to anyone after a while.

I know there’s a certain type of person out there whom The Longing will really speak to, but it’s hard to put into words exactly the type of person that will be. If you think you’re that person, I definitely recommend picking this one up, because The Longing just isn’t quite like anything else out there. Besides: I really, really want to know what happens at the end of 400 days.