A Look at Shovel Knight:
Plague of Shadows 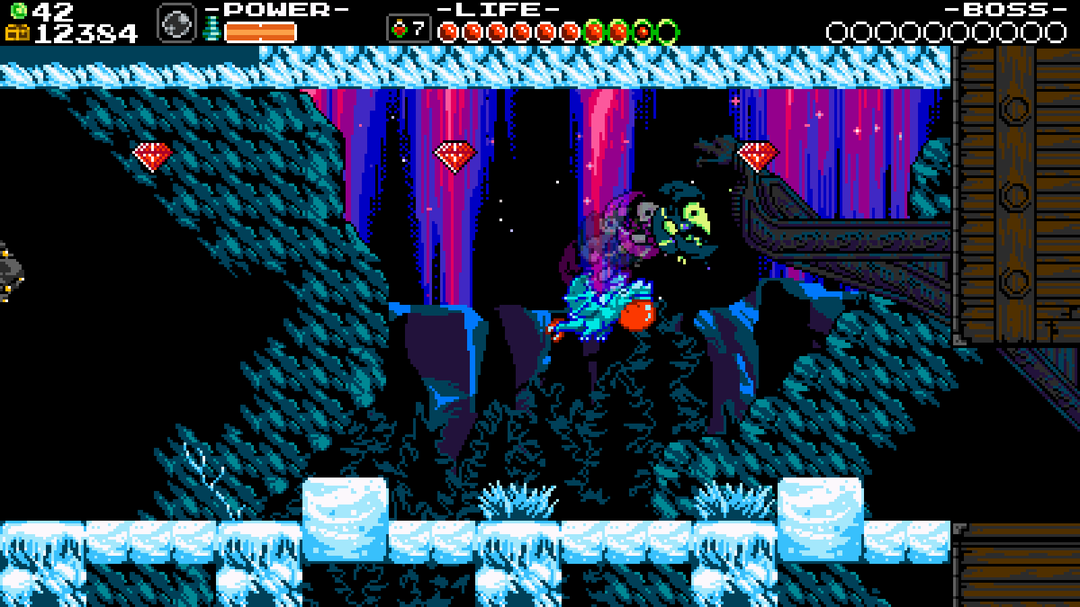 Remember Shovel Knight, t he quirky retro platformer that had the whole indie community blowing up for a month or so? If you don't, it's a good game for a good price, and you should absolutely buy it right now. If you have played it through already, Yacht Club Games has just given you reason to go back through again. They've released their first free expansion for it as promised, and it’s definitely worth diving back into the game for. 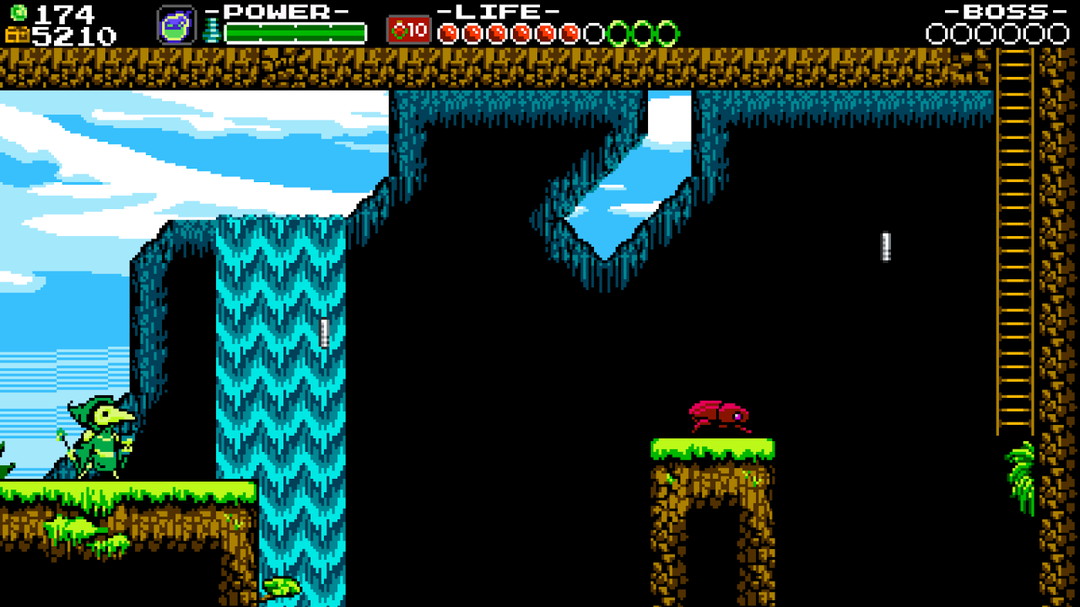 Plague of Shadows was supposed to just give players access to another character: Plague Knight, the mad alchemist of the Order of No Quarter. As seems to be the norm, Yacht Club Games dug a little deeper than that. They’ve introduced a new Challenge Mode, added new secret areas to every level, and released a whole second storyline running parallel to the first. This one follows Plague Knight as he hunts down his fellow members of the Order in order to gather ingredients for his Serum Supernus, the ultimate potion. There's a lot of content being added here, so let's dive right in.

To begin, a bit of a warning about difficulty, and the leap that happens during this expansion. Now, I’m an experienced platformer. I grew up playing Mario and Mega Man, and even the hard mode of Shovel Knight didn’t give me a whole lot of trouble, so I was surprised to find that Plague of Shadows is hard . Really hard. Died-on-the-first-level hard. Part of it perhaps is that Plague Knight’s controls take some getting used to. He has a lot of aerial tricks, but they’re hard to handle at first. It’s not unusual to launch yourself into spikes, or overshoot your target and fall into a pit. You can get items that help with this - the Vat, for instance, is invaluable in later levels - but they don’t do you any good when you’re first starting out. Plague Knight plays truly differently than the original protagonist, which is both great for extending replayability and adding more fun... but it means you have some retraining to do.

You’ll also need some practice with Plague Knight’s attacks. He doesn’t just throw things in front of him, that would be far too simple. He can lob his potions into the air, or throw them downward at an angle if he is in midair himself. Again, you’ll get more abilities and options as you progress, but it can be pretty frustrating at first. Overall, I found that Plague of Shadows actually has a negative difficulty curve; levels do get harder later on, but not nearly as quickly as Plague Knight gets better. Shovel Knight's base game was sometimes criticized for being too easy, and this expansion tries to remedy that in a big way. 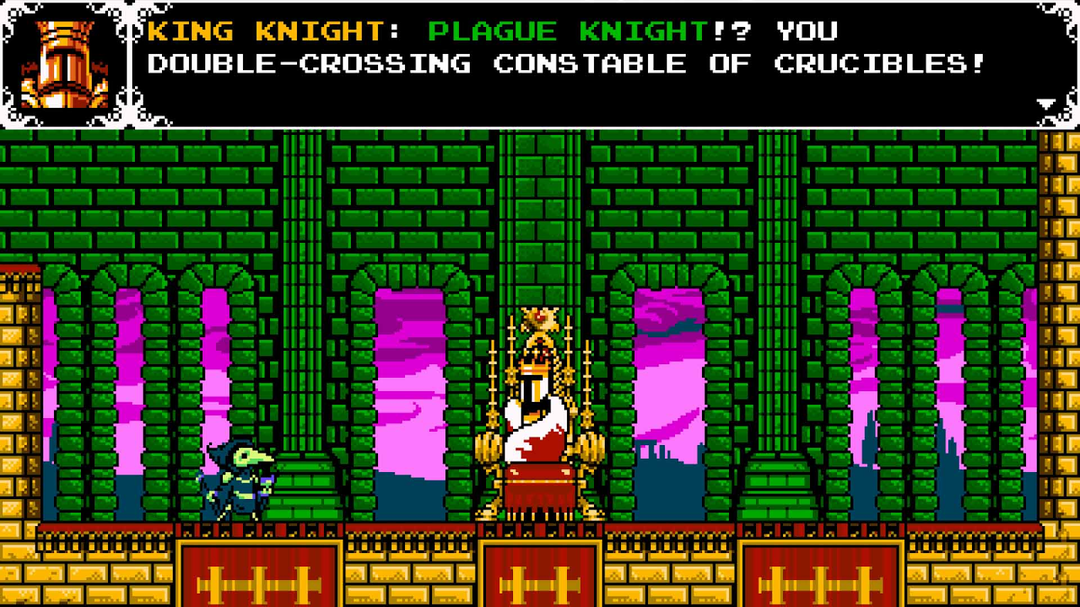 The characters and dialogue are as delightfully off-the-wall as ever.

I wrote an article after demoing this game at PAX East, looking into what the expansion had to offer, how it compared to the original game, and what might be in store. Overall, not a lot has changed since then. I did notice a couple of small differences in the Plains of Passage, which was the only level available to play in the demo, but it was a good representation of Plague of Shadows as a whole.

One thing in the demo which was noticeably, and disappointingly, missing from the final product was the crafting system . Plague Knight doesn’t actually do much of his own alchemy in this game. Most of his weapons and upgrades are the work of his assistant Mona, funded by the gold and Cipher Coins that you collect. What could have been more perfect for an alchemist than the ability to craft his own items? It seems like a missed opportunity.

The Potionarium is where the magic - uh, science - happens.

(Not to be confused with the Explodatorium.)

Still, Plague of Shadows has a lot to offer, even without the crafting system. Plague Knight has an impressive arsenal, and I mentioned in my previous article that Plague Knight is meant to be played more strategically, something that can be really satisfying when you start approaching the levels as puzzles to solve. With bombs that travel along various paths and create a variety of explosions, not to mention the relics you can collect, you’ll always have the right tool for the job.

When it comes to characters, Yacht Club Games continues to impress. When you play through as Shovel Knight, Plague Knight is shown as a cackling, evil madman. In the Plague of Shadows expansion, you find that that was just one aspect of a surprisingly multifaceted character. He’s callous and selfish, and yes, a bit crazy, but Plague Knight has surprisingly human motivations for what he does. He’s even kind of cute, in an awkwardly dorky way. 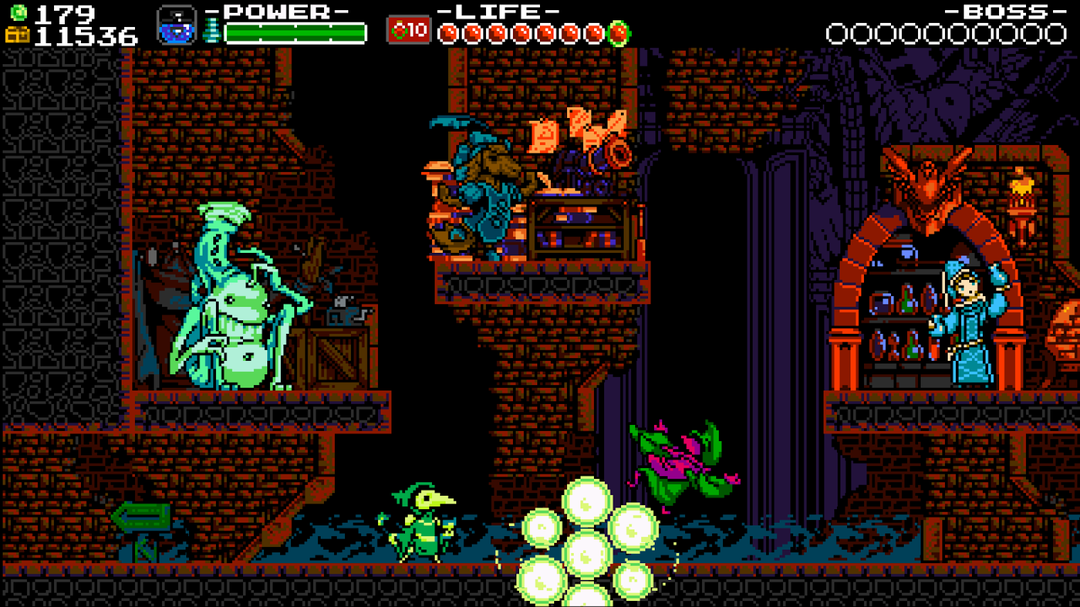 No self-respecting villain would go without casually killing some underlings now and then. There are standards, after all!

I’ve said it before, and I’ll say it now: Shovel Knight thrives on making the old new again, and that’s exactly what Plague of Shadows has done for Shovel Knight itself. It’s a shot of new life for a game which, despite its many great qualities, has pretty low replay value. Perhaps most astonishing of all is the fact that, due to a wildly successful Kickstarter campaign, this expansion is completely free.

I’d also like to remind our readers that, according to the Yacht Club representative I spoke to at PAX East, there are at least two more expansions in Shovel Knight’s future. Thanks to that same Kickstarter campaign, they have promised similar expansions following Spectre Knight and King Knight through their own stories. Will we eventually have all eight members of the Order of No Quarter as playable characters? Maybe, maybe not, but it’s certainly fun to dream.

Like what you've read? Come check out our Facebook and Twitter, so you can stay on top of all the reviews and articles we brew up. Want to get revenge against our opinions, or get us to look at a particular game? Leave us comments below, and we'll get right back to you after this next play-through attempt.