At The Intersection Of Insanity And A Quick Buck

Greetings, cosmic entrepreneurs! Do you dream about turning your life savings into a vast fortune? Do you long for adventure and excitement? Are you really bored at home? Then does Corporation Incorporated have the deal you've been waiting for! Invest today and you'll get unlimited access to our warehouses, full of everything you'll need to build your very own galaxy truck. Riches and fame are yours for the taking, so what are you waiting for?*

*terms and conditions apply. Penalties incurred for lost ship parts will be deducted from overall compensation. Corporation Incorporated is not responsible for any personal harm incurred by meteors, pirates, or vicious space aliens. Serious injury including but not limited to dying in the cold reaches of space may occur. 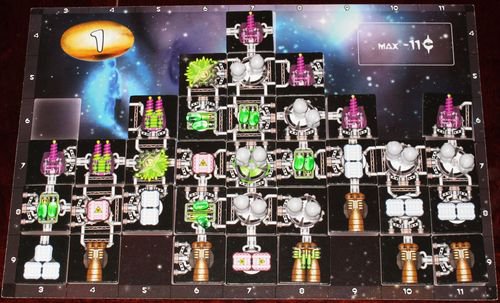 It's a shame she won't live, but then again who does?

Madness In The Mix

Galaxy Trucker might just be the maddest game in my collection. I'm hard pressed to think of a single game that is as wacky or as strange. It's basically one half a game about building as fast as you can against a timer and one half watching your creation fall to pieces bit by bit. If you're lucky, you might just turn a profit before things come apart at the seams.

A game of Galaxy Trucker sets players staring across their personal player boards, ripe with empty square spaces, to a mountain of facedown tiles in the center of the table. Once the timer is flilpped, players must frantically find pieces they need to build their ships. There are some caveats, though. You can only use one hand at a time. And you can't flip a tile to check it unless it's over your board. You're allowed to "reserve" a couple of tiles, but if you don't build with them, they count as "destroyed" bits at the end of the route. You could toss your faceup tile back to the center of the table, but then it's fair game for anyone to take. Oh, and Corporation Incorporated uses interstellar super glue, because as soon as you join up a tile to your ship, it's stuck there for good. No moving it!

Of course, being the wacky game this is, you can only join tiles if their connector pieces along their edges link up. You're trying to juggle this as you try to juggle whether you have enough lasers on your ship, along with if you have enough crew, and you desperately wish you could find a cargo hold by now, and by the way how many batteries do you think you'll need, SERIOUSLY where are ANY of the cargo holds, and oh you just found solar panels which can provide free power if you connect them to-- maybe you'll just install that here, and oh my God the timer is nearly empty and you need more engines, and just PUT THOSE CREW QUARTERS DOWN because you need more connections to slap on that extra engine! Whew. It's ok. Let's just have a look at your ship.

Your solar panels are connected to crew cabins (which gets you nothing). Why do you have a shield booster on your ship, and no shield generators? You only took one battery. And the one cargo hold you found is dangling dangerously off the side of your ship. Where I'm from, we call that "meteor bait." Betcha that pieces gets sideswiped from your ship long before you ever cross the finish line.

It'll be fine! What's the worst that could happen? 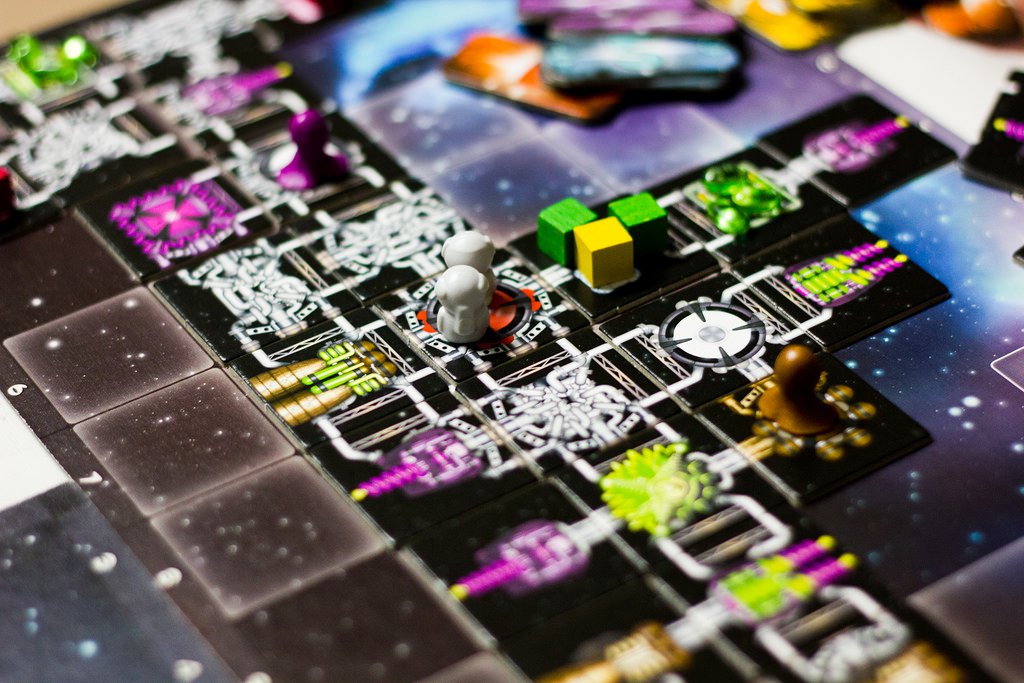 Backwards facing lasers. Sure! Why not?

After a brief check on everyone's ships to make sure all pieces are connected legally (with illegal tiles removed as "damage"), it's time to hit whatever counts for road in this wacky galaxy. A deck of random challenges is shuffled and flipped over one card at a time, and players' ships will use whatever systems they have to survive the challanges ahead. Sometimes you find planets rich in cargo, and sometimes horrible predator aliens get aboard your ship and devour everything that isn't behind a self-defense turret or armed crew.

In true, disaster fashion, if a piece of your ship should come loose because, say, a blast-happy commando boarded your ship and blew up some charges, if the rest of your ship isn't somehow connected to the main structure any longer, you lose all those pieces too as they drift off into space! Maybe you just lost your last engine. Maybe your precious cargo was over there. You'll just have to laugh it off.

You drop out of the race if your ship is without crew at any point or if you encounter a wide swath of open space and have no engines left to drive you through it. You're just as likely to end a round of Galaxy Trucker with all hands lost in space as you are to be gripping white-knuckled to a storage bin holding a single cube of cargo, a lone afterburner puttering you into the next depot. 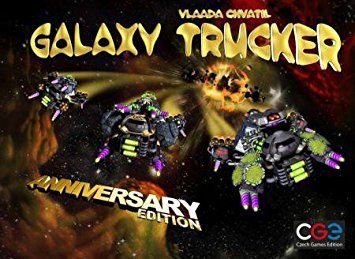 Dat big box. Meteors might have to hit your shelves to make room for it!

It's About The Journey, Not The Destination

Whether this game sounds hilarious and exciting or like a textbook exercise in frustration will determine if it's a game for you. There is a game in this box, in how you build strategically for the coming challenges. The rules even say that you're allowed to look at some of the cards during the building round, to know through advanced analytics what's in store for you. But the pace of the game is so insane you'll almost never find the time to do it. Even given the perfect build, things will fall off your ship. Things will go wrong. Yes, a meteor will shave off that one laser that later determines success or defeat against pirates (true story, they still got me even though I peeked at the cards and knew they were coming).

Can you laugh at your misfortune? Can you find amusement in the theater it's providing for everyone at the table? The game will give you plenty of opportunities to laugh at your friends, but I find this is a game best played when you embrace all the entropy. Not just the bad stuff that happens to everyone else.

In some ways this wacky game can even be cathartic. Sure it's a few minutes of breakneck building and stress, but the satisfaction you get when you look at your creations is one of genuine joy. Plus they provide the perfect opportunity to crack some jokes, smack talk, and board game bravado. And sure, bad things will happen as you fly through space, but while you have some small decisions en route, you mostly sit back and relax as the journey plays out in front of you.

There is no board game that's quite like Galaxy Trucker, and when played with a like-minded crowd it is one of the most shenanigan-filled, laughter-inducing times you can have in board gaming. If you get a chance to play it, I hope you give it a shot. I guarantee you'll never play anything that's quite like it. It's absolutely mad, and I don't think it's ever leaving my collection.

Editor's note: I reviewed the Anniversary Edition, which is a combination of the base game and two expansions, along with an oversized box and insert to hold everything. I highly recommend it if you can find a reasonably priced copy. The problem is these days it goes for anywhere between $125 and $150. That's a steep price for the convenience of everything in one box. On the other hand, you can get the original base game for around $40 and the expansions for $25 apiece; that's a sizeable chunk of change less for everything separately. If you're interested in buying a copy, I can't tell you which is "best", but at least there are options out there no matter which side of the space highway you stand on.