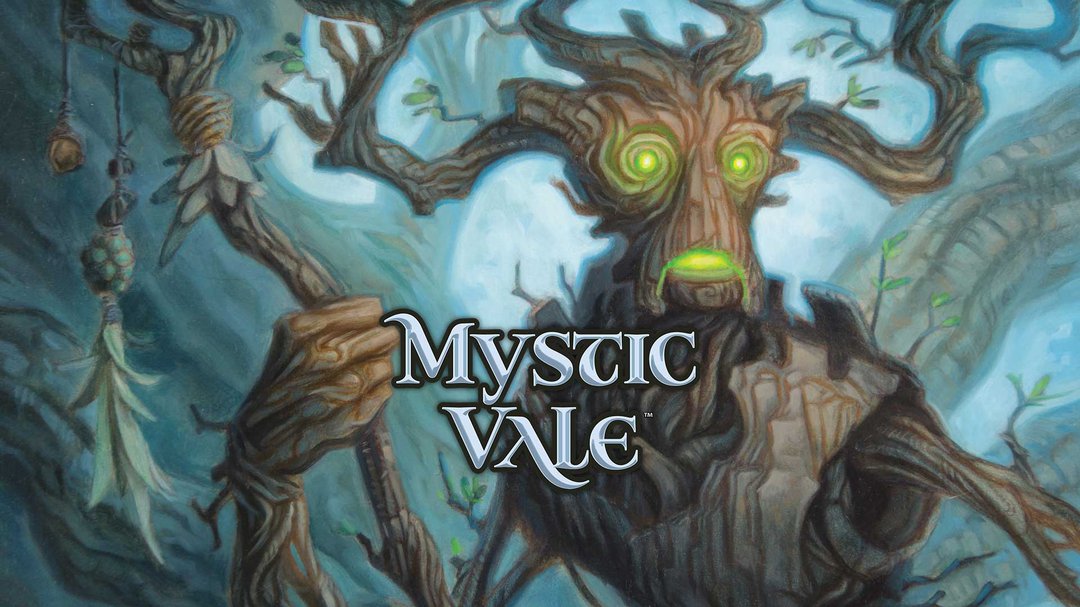 A curse of decay has been placed on the Valley of Life. You, a druid, have come to the Valley to help the spirits and restore the land. Using your magic, you will try to channel the powers of nature to fight back against the curse. You can even use the power of decay to your advantage, but be careful; use too much, and it could turn against you.

Mystic Vale is a deck builder along the lines of Dominion or Ascension. It’s a pretty straightforward game - each turn you draw cards, use any resources that you’ve drawn to purchase more cards, and try to end the game with the most victory points. Sound familiar? Luckily, this one has a couple of twists to keep things interesting. 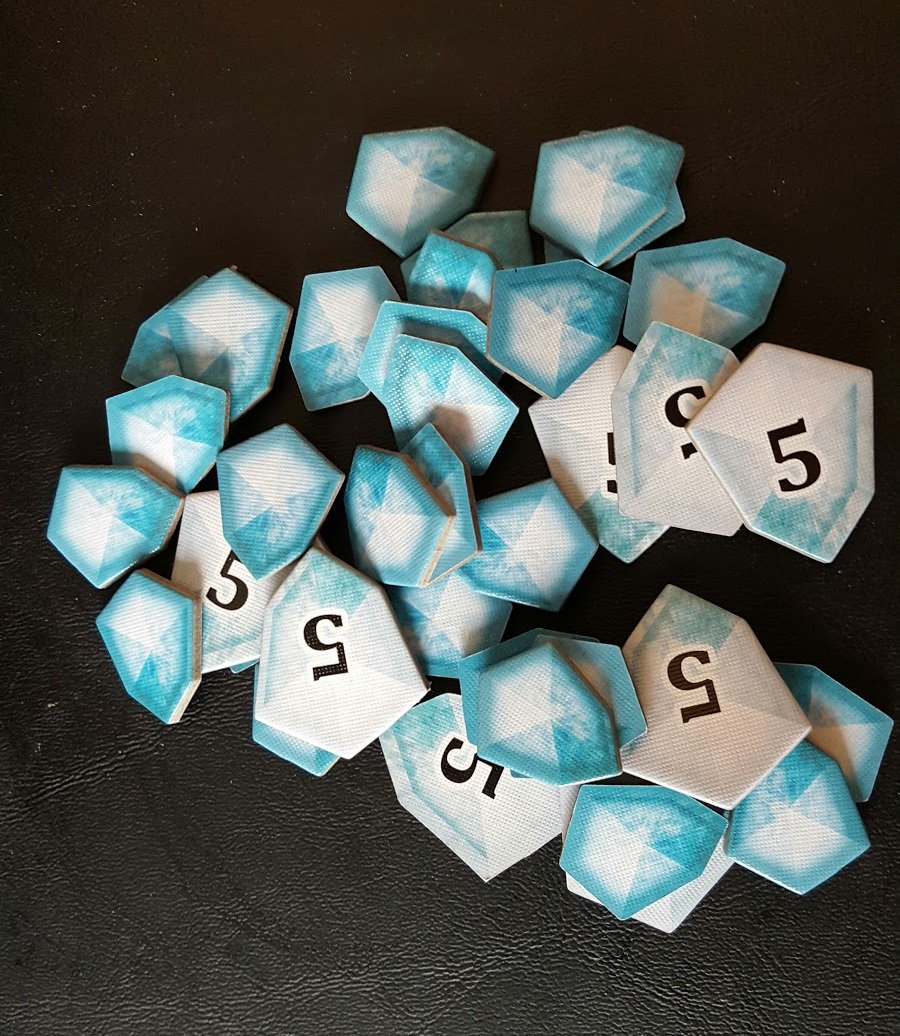 If you’ve ever wondered what victory looks like, it’s little blue gems on a dirty table

The Good: Bringing Fresh Ideas To The Table

The first thing Mystic Vale does differently is card management. Instead of drawing a hand of X cards at the start of each turn, you flip cards into your field until you reveal three Decay symbols. At this point you can either choose to flip another card, or to keep what you have and start buying things.

Why would you not want to keep flipping? Because if you flip a fourth Decay the curse overtakes you. You Spoil, and lose your turn. Should you risk flipping another card so that you can buy that really cool thing, or is it better to play it safe? Of course, the risks can also be managed with good card choices - if you haven’t bought a lot of cards with Decay symbols, then your odds of flipping a fourth one will be lower. It’s a cool take on the traditional deckbuilding format that adds another layer to the strategy.

Then, of course, there’s the card-crafting system that Mystic Vale is best known for. Not only do you build your deck, you actually build the cards in the deck. It’s not as complicated as it sounds, and it makes for a richer strategy and gives a lot more options. Basically, each card has three slots where you can put the things you buy during the purchase phase. You can fill all three on a single card, or only two or one. You can even leave a card completely blank if you so choose. 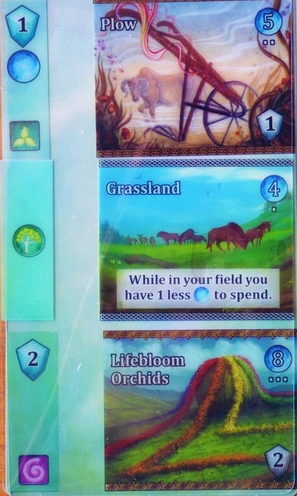 Here's an example of a card with all three slots filled. The numbers on the left indiciate how many points it's worth and what resources it provides when flipped. The top right number is how much it cost to buy, and the bottom right is how many extra points it gives at the end of the game

There’s a lot to consider when building your cards. You want to make sure that you have access to enough resources to buy the things you want, but eventually you also need to make sure you’re scoring victory points. Focusing too heavily on resources can have you come up short in points, while focusing too heavily on points can prevent you from buying what you need. Then, of course, there’s the Decay. A lot of the better cards in Mystic Vale have a Decay symbol to help balance them, and if you overload on these Decay symbols you’ll find yourself unable to flip more than one or two cards without Spoiling. You have to be cautious. You’d be amazed at how frustrating just a single card with two or three Decay on it can be.

Between the hand management and the card crafting, Mystic Vale isn’t like other deckbuilders, and that’s a good thing.

Mystic Vale suffers from a Monopoly-ish problem in that the rich just keep getting richer. Once one player takes the lead it can be nearly impossible to take back. Unlike, say, Dominion, where your cards provide money which you can use to buy victory points, Mystic Vale’s victory points are right there on the cards. Every time you run through your deck and reshuffle it you’re getting all of those points all over again. What that means is that, if one player manages to gather up a lot more of these victory point cards, they’ll just keep racking up more and more points while the other players scramble to catch up, and most likely never do. The visibly dwindling supply of available victory points on the table only serves to drive the point home. 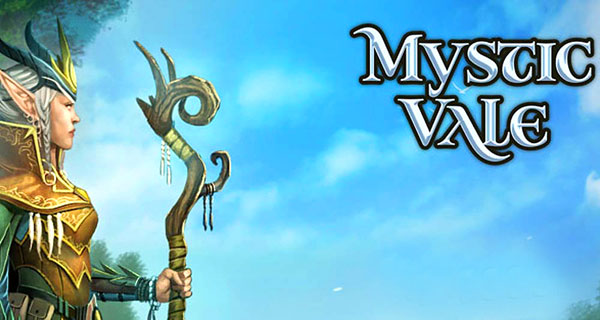 Pictured above: an ancient and powerful druid contemplates how she can make sure those lazy, entitled Millennial druids don't get any of her victory points

There is also virtually no player interaction whatsoever. That’s not unheard of for this type of game, but even Dominion had some cards to allow you to interfere with other players, mostly by forcing them to discard cards. Mystic Vale doesn’t have anything of the sort, and that just compounds the Monopoly effect I discussed before. The only way you can try to slow down your opponents is by guessing what cards they’ll want and buying them yourself.

Since Dominion hit shelves in 2008, the number and variety of deck-building games have really exploded. They exist in many different styles and themes now, everything from the classic objective of hoarding money to buy victory points, to waging crazy inter-dimensional wars. 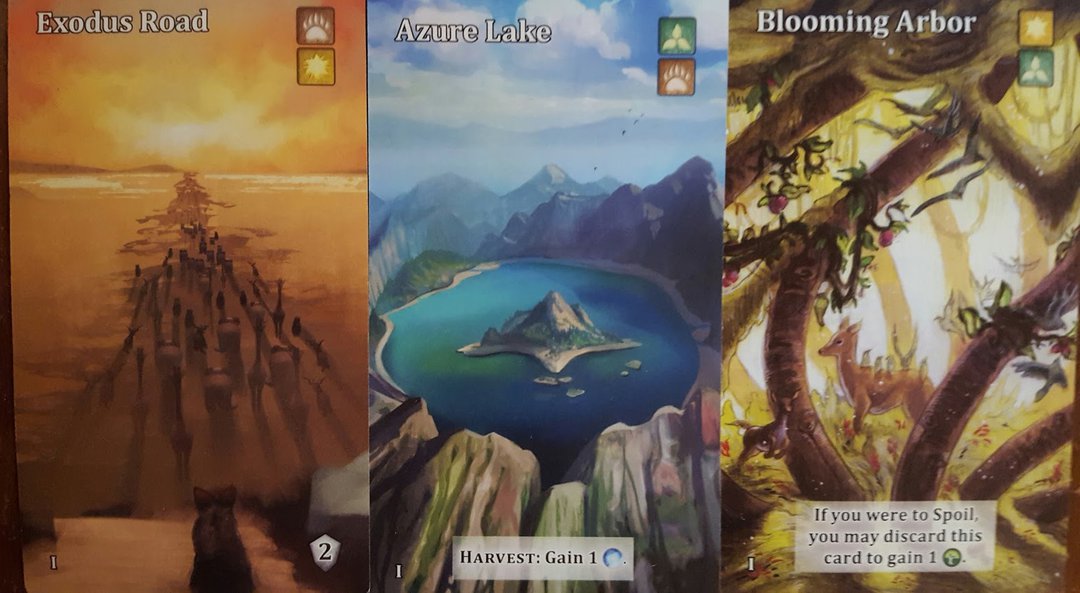 Mystic Vale also has Vale cards, which can be purchased with special resources. They may have special effects, or be worth extra points at the end of thegame

Among the ever-growing number of deck-builders, it’s great to see one bringing something truly unique to the table. In the end, Mystic Vale is all about resource management and building a strong, efficient deck, just like any other deck building game. However, with its Decay mechanic and, most notably, its card-building, Mystic Vale offers some extra layers of strategy that you don’t find in other card games. Overall, it’s a fun and engaging game and a worthy addition to the genre.

What’s your favorite deck-builder? Do you think the card building system in Mystic Vale is a great new idea, or just a gimmick? Leave us a comment here, or drop us a line on Facebook and let us know what you think! If you like our content and would like to see more of this type of thing, consider support us on Patreon.