It’s nighttime in the big city, where dreams and nightmares come true by the glare of neon lights, and… you know what, just read this: 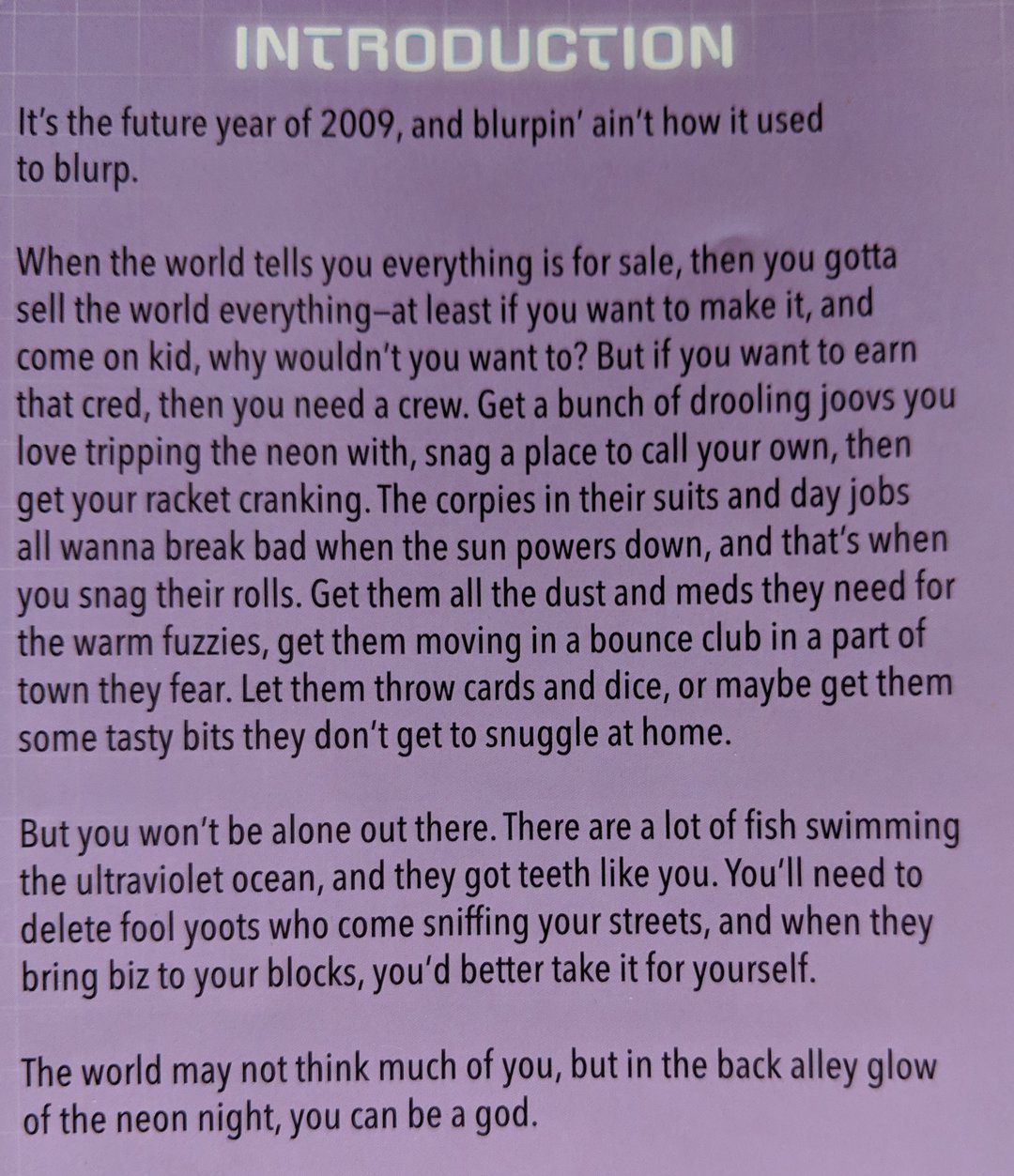 The rulebook captures the mood of this game better than I ever could!

Neon Gods is a combination of territory control and resource management that manages a lot through combining these two board game systems. My play group took to calling it “Tyrants of the Underdark (Neon) Lite” as an homage to another great game that tries to do similar things, although the tone in Neon Gods sets it apart. You take command of a street gang as they fight for turf, recruit new members, build up their defenses, and push drugs "product."

Of course, all of those are just different means to the same end, because it’s all about the Blurp. Everyone wants it, everyone needs it, it is your one and only win condition. Who controls the Blurp controls the city.

...I have no idea what Blurp is. They never define it, which is part of the humor of Neon Gods. It's a slang term, but obviously everyone already knows what Blurp is, so there’s no need to explain it. I’m not even sure if Blurp is a noun or a verb, so for now I’m just going to assume that it works like Smurf.

Clearly Neon Gods is leaning hard into the retrofuture vision of what the 1980s thought the 2000s would be like, which is a setting that I unapologetically adore. I’ve played Double Dragon Neon from start to finish at least half a dozen times with as many different people, and this game has repackaged that same eyeball-searing, tongue-in-cheek version of hipness into a board game. 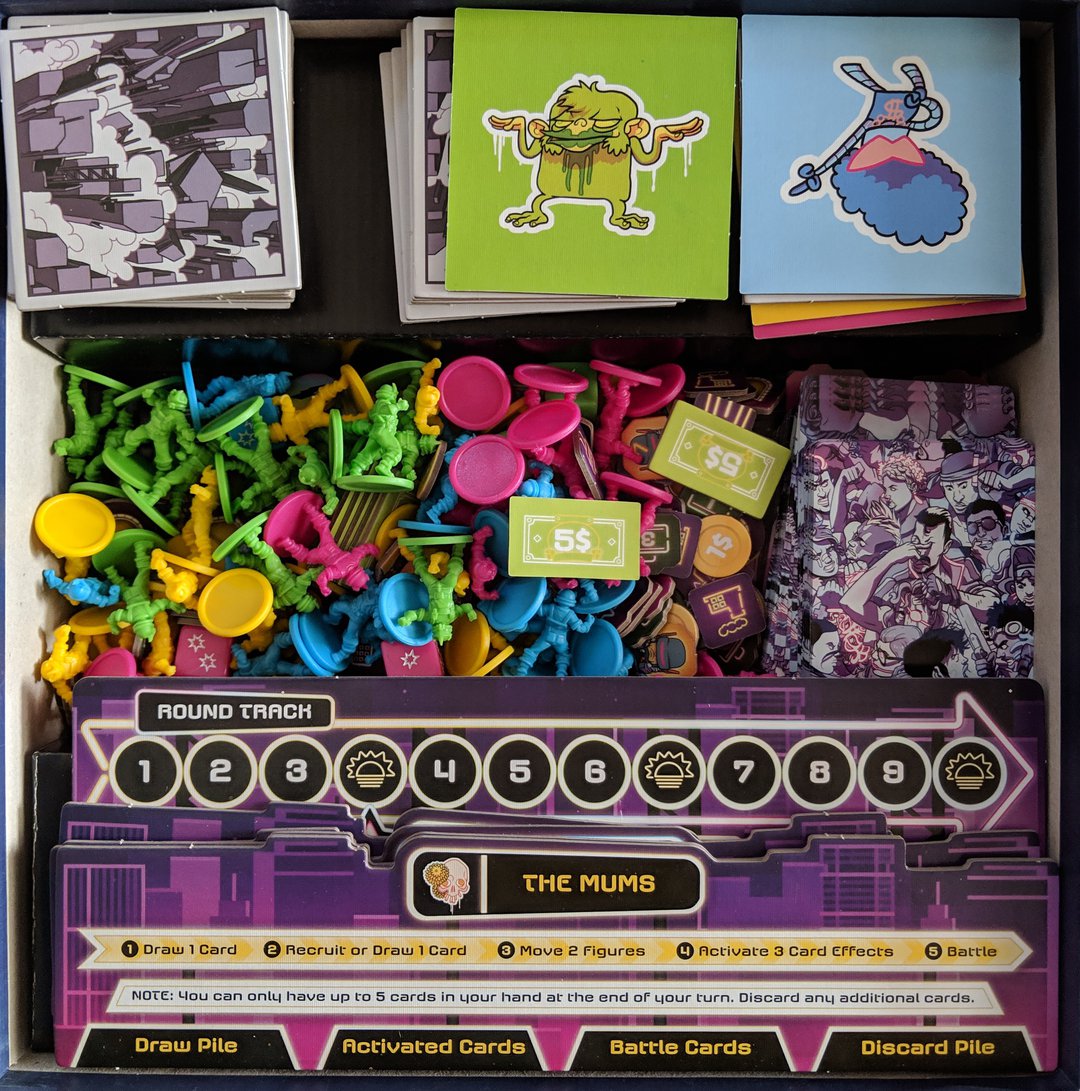 It's like an 80's-themed nightclub threw up in a box!

Speaking of packaging, though, Plaid Hat really dropped the ball on this one. Neon Gods uses minis, tokens, dice, cards, and tiles, and none of them sparingly. The box has over 250 pieces in it, and you’re given no way to separate or store them except in a loose jumble. Each time you open the box you’re resigning yourself to a solid 5-10 minutes of just separating out all the pieces. Seeing what the inside of the box looked like honestly soured me a bit on the game before we even started, because I was imagining what I’d have to go through next time we played. This problem can be easily fixed by getting some small ziploc baggies, but having such a simple solution makes me wonder why Plaid Hat didn’t just include them in the first place.

Enough about design; let’s talk gameplay. Neon Gods takes place over nine rounds, with a daylight phase after every third round. Each turn consists of five steps: Draw, Recruit, Move, Activate, and Battle. Draw is self-explanatory: You draw a card from your deck. Recruit allows you to hire a new gang member to add to your hand, adding a minor deckbuilding element to the game. If you don’t want any of the cards that are available, you may draw another card from your deck instead. 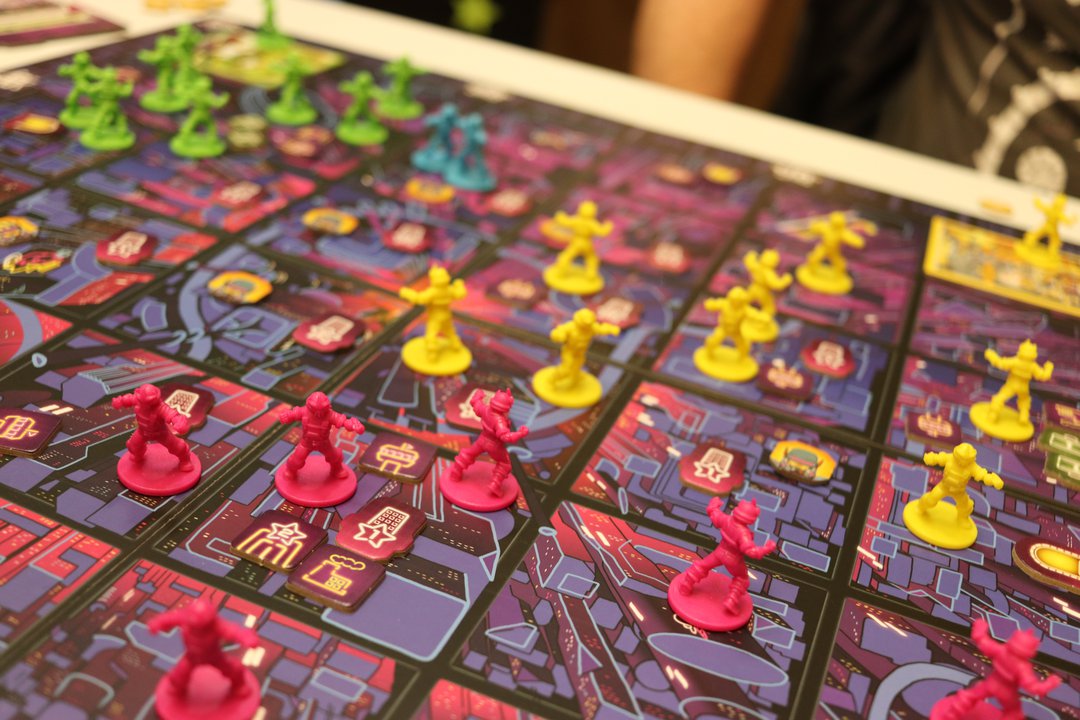 When the game finally does hit the table, you can see why it was worth all the trouble. It's a very pretty game, with a very distinct art style.

Neon Gods handles its deckbuilding differently from most other games. Instead of each card having a fixed cost, there is a sliding scale similar to the Villager cards in Passing Through Petra. New gang members are flipped off the top of the recruitment deck, and the longer a gang member goes without being purchased the cheaper it becomes. The sliding scale is a double-edged sword - there are a few cards that are just plain better than others, and if you can’t afford to snipe those cards on your turn you may end up handing them to your opponent for cheap or even free. On the other hand, the reverse is also true, so if you’re lucky you can get very powerful cards for very little investment. While you can keep your options open if you have enough money coming in, this setup does add a bit more randomness to the game. Some players like that and some don’t, so use your own judgment here.

Moving lets you push two of your pieces up to three spaces each. This is how you get into position for battles and claim territory for the scoring phases, and there’s really not much more to say about it.

Activate lets you play up to three cards from your hand for their effects. Effects include gaining money, drawing extra cards, taking extra move actions, building structures/creating product, recovering cards from your discard pile, and selling the product you’ve made. Building and selling tend to be the two most powerful actions here: Structures can give you a variety of bonuses, including extra Blurp, while selling product is by far the best way to make money. However, drawing extra cards or moving extra pieces can get you in position for big plays. As with the recruit step, you may choose to draw cards instead of playing them. 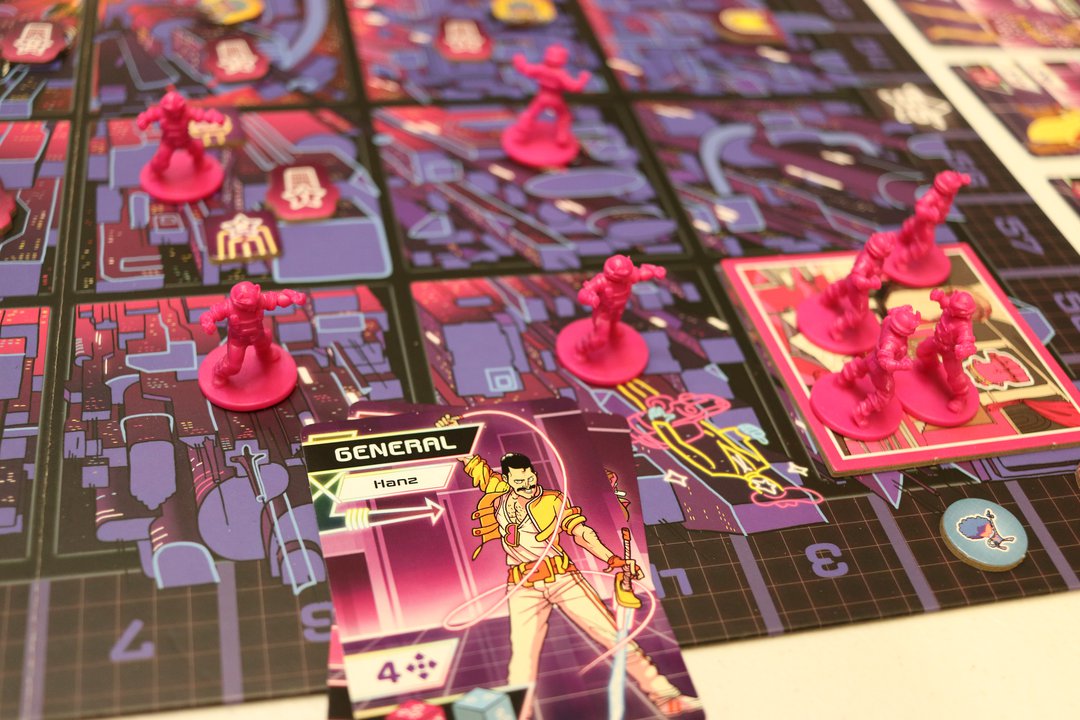 You may also have some fun finding easter eggs and tributes to 80s icons.

Finally, the battle step only happens if you have pieces on a square that also contains an opponent’s piece or an Andy token. You choose up to three cards from your hand and/or keeps things fresh by using different decks for the deck-building, umber of hits rolled to the total number of minis you have on that space and all adjacent spaces. Add in bonuses from watchtowers if you have any, and whoever has the higher total wins (Andys have flat values that you have to match or beat). The winner stays and gets one Blurp, the loser has to return to their base. An important thing to note here is that structures and product are tied to the spaces where they’re built, not the player who built them, so with enough firepower you can actually take over what your opponents have made and use it for yourself.

Blurp, which is your victory points, is calculated during the three daylight phases. You earn Blurp for every square you control. Squares with skyscrapers and monuments on them are more valuable, but even basic squares are worth one Blurp each. You can also spend money during each daylight phase to purchase more Blurp. Finally, at the very end of the game, you also earn bonus Blurp based on the number of factories that you have. Add it all together, and the player with the most Blurp wins the game!

Neon Gods should play fairly quickly once you learn all the rules; supposedly a full game of nine rounds should take 1-2 hours, and with a good group there’s no reason why that can’t happen. However, having so many different steps in each turn means that there are a lot of opportunities for the dreaded Analysis Paralysis to strike. Even one player who’s prone to it can drag things out by half an hour or more, and while Neon Gods is great as a shorter game, it loses some of its charm past the two-hour mark.

In both rules and art style, Neon Gods is like a lighter version of Tyrants of the Underdark. The scenarios in this game, however, are something totally different. While Tyrants keeps things fresh by using different decks for the deckbuilding, Neon Gods instead has a variety of different ways to set up the board. 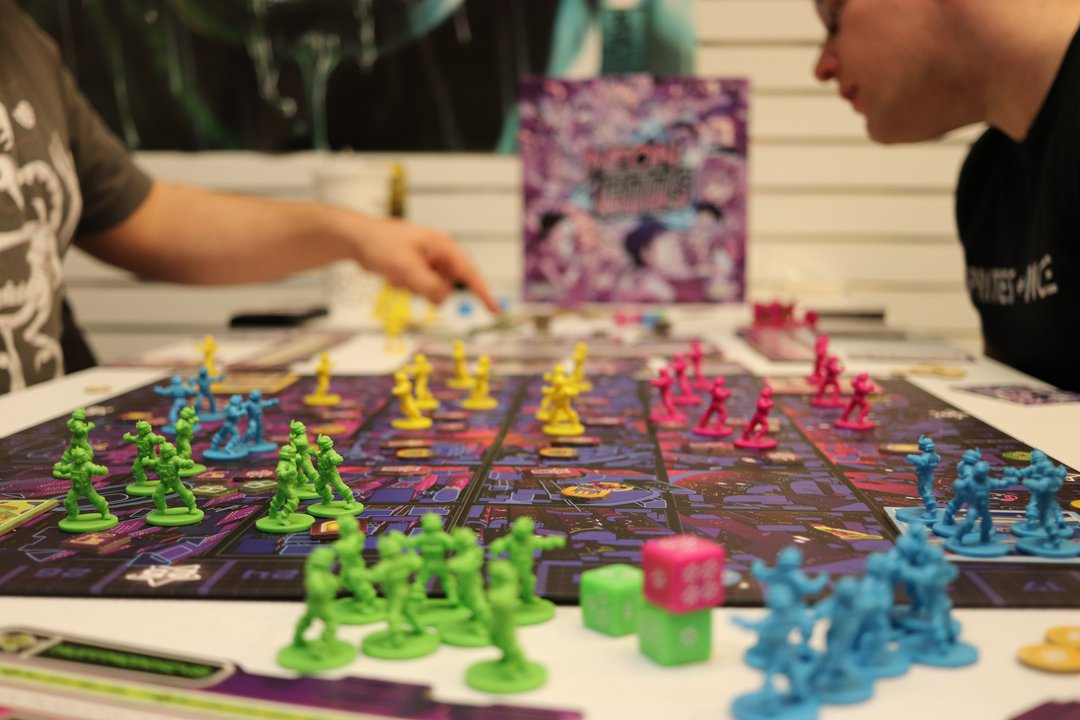 The rulebook comes with five different scenarios. The recommended starting scenario is a basic setup with player bases in the corners and all the scoring tiles in the middle, but things can get pretty wacky after that. I’m a fan of Tunnel Assault, where the middle of the board is surrounded by dead zones (spaces that you can pass through and land on, but aren’t worth any points). Each base has a tunnel near it, which are linked to tunnels in the middle of the board where the valuable tiles are. It leads to a hectic scramble to clear out the middle of the board and stake your claim. You're also encouraged to design your own, but Neon Gods has great replay value with the five setups in the rulebook alone.

I had a great time playing Neon Gods. It has one of my favorite themes, tense and exciting gameplay, and excellent replay value with the different scenarios. It’s a lot of fun and well worth buying, but there are a couple of things to be aware of before you do.

One major issue I found is that Neon Gods features just enough randomness to really tick off certain types of gamers. Between the die rolls for combat and the sliding scale for recruitment costs, sometimes your plans just won’t work out. The other issue was the Analysis Paralysis problem I mentioned, especially if you’re planning on a four-player session. Neon Gods should be a reasonably quick game, and even one player dragging out the action can be the absolute death of it. 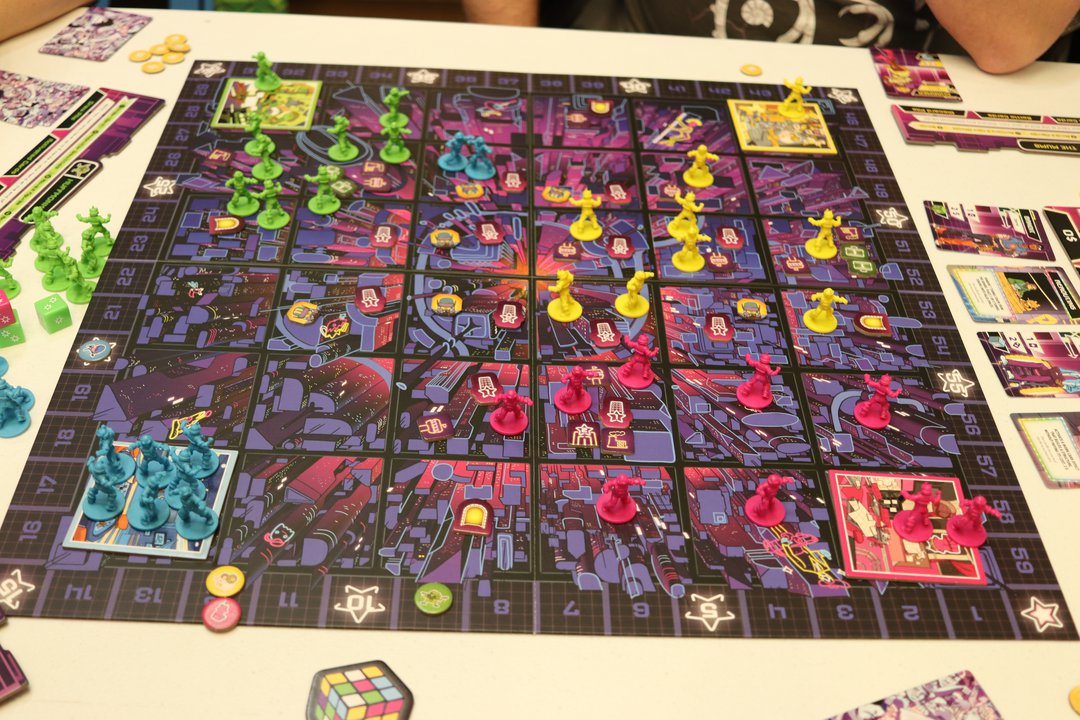 If you’ve got the right group of players, Neon Gods is a blast. It's a great game because it has a strong aesthetic and is a good way to let new board gamers try out some more complicated mechanics without overwhelming them; it also isn't too light, so more experienced players won't feel as if there's nothing on offer. If you’re looking for an area control game that’s on the lighter, sillier side, or if you’re just into the over-the-top 80s setting, I would absolutely recommend it! I'll say one thing for sure: I never thought I'd be trying to use the world Blurp so seriously in public.

Have fun fighting the turf war!