Now that we’re through the Christmas and New Year’s holiday season, I’m reminded why trick taking games sit in a very special place on my gaming shelves. That basic card playing formula, twisted and reimagined in all sorts of novel ways by modern designers, keeps the fun and excitement accessible. My family indulges in some games like Cosmic Encouter but shies away from anything too heavy. Getting something new to the table can also be hard when my folks aren’t in the mood to learn rules. But trick taking games? They grew up with that stuff. So when I told them that I had a game that was easy to learn and was about taking tricks—well, I don’t think I’ve ever gotten interest in a new game so fast with them!

Nokosu Dice (pronounced “No-Cos” per the rulebook) is another game coming to us from Japan thanks to the hard work of Big Cat Games. The name means “to leave behind” and refers to the crux of this special little game: that you will be playing with both a hand of cards and some drafted dice, and by the end of the hand you’ll have one “leftover” die. We’ll get into why this mysterious little leftover is so important, but I will say up front that this game is clever, tight, devious, and a heck of a lot of fun to play! Yet it remains so simple to teach, because at its heart it still has that classic trick taking feel.

At least with my family, there's just something about small box games that make them great for the holidays!

Silly Rabbit Tricks Are For Points

I heard at PAX Unplugged that trick taking games are quite popular in Japan. I can certainly see why they would be! They fit a minimalist design aesthetic you see a lot in Japanese games, they’re small box friendly, and they don’t hog the table. It’s easy to get a group of friends together nearly anywhere for games like this. Not to mention they all follow that classic convention which, if you’ve made it this far and are still asking “what the heck is a trick taking game,” I will explain.

Essentially, you have a hand of cards and one player leads the hand with any card they’d like. All other players are required to “follow suit,” playing in the same color or suit as the lead card, unless they don’t have any left. In which case they may then play any card they wish. The highest value card played into the hand takes that trick. There’s also usually what’s called a “trump suit,” and these cards are treated as highest value when deciding who wins a hand; if a trump card is played into a hand of non-trumps, say because that player didn’t have any of the lead suit left, it’s considered the highest card even if the number is a 1. Otherwise the biggest number of the suit that was lead, or of more than one trump card, takes it. Traditionally, a good idea is to control whether you intend to take a lot of tricks or take very few, depending on the particulars of the trick taking game you’re playing, and you try to manipulate how you play your cards to ensure that end result.

The setup is as fun to play as it is colorful!

In the case of Nokosu Dice, the formula gets spiced up in a few ways. For one, players get a couple random dice from a felt bag and then draft out of a pool, giving them some agency, to round out their hands. The dice account for one third of your total “cards” and remain face up on the table. In terms of card play, if a trump suit is the lead card for a hand, all players must instead play within the trump. Here’s the catch though! In the first instance of a leftover die, the one number/color left over from the dice draft determines trump; both the number and the color are considered trumps, with the number being higher in the case of ties (as they are more rare). So, for example, a leftover purple 4 means purples are trump suit and also 4s are trump (and 4s of any color beat purple). Naturally any purple 4s are the highest thing that can be played.

As players play their hands, they may play either a card or one of their remaining dice. The last die, however, is not played. Instead it’s put on a special card as a reminder, and it’s this die that gives the game its name along with determining your round end bonus. If you can take exactly as many tricks as the value of the last die you left yourself, you get tons of bonus points! This bonus becomes worth less and less the more players qualify for it in a round, though, so often your consideration for how to hit your own bonus is at odds with trying to figure out what die others are trying to leave themselves and making sure you mess with them. You can also declare that you’ll take zero tricks and toss a die back in the bag (you won’t be left with an extra in this case), and if you can manage that you’ll earn the regular bonus on top of even more points! In other trick taking games this is what’s commonly referred to as “shooting the moon,” a point bonanza for sure, but equally hard to accomplish in a game where your hand size is a whopping 15! Try at your own risk. I did for fun and review purposes (which is to say I got greedy), and it didn’t end well for me!

At the end of each round players earn one point for every trick they took, plus any bonuses they earned, and play continues for four rounds. Highest score at the end is the winner!

There are five "suits" or colors of cards and dice in this game. Also the bag is embroidered and high quality!

Nokosu Dice is both incredibly clean and devilishly clever. For only a handful of rules, half of which will be immediately familiar to anyone that’s ever played a trick taking game, the possibilities of play let you tumble down a delicious rabbit hole of devious decisions. For example, you can draft dice to set yourself up with a lot of one suit, aiming for a lot of trump plays, but if you can’t help ensure the one left after the draft is also that color, you’ve suddenly taken a bunch of non-trump junk you’re just stuck with. If I see you’ve taken three tricks already and your remaining dice are 1, 2, and 4, I know you’ll be aiming for the 4 to be your leftover. I can lead that color in an attempt to force you to play that die so you can’t lock it in for bonus. Similarly, it’s both a blessing and a curse that players have a third of their hands face up on the table. Sometimes you can be reasonably certain you can get away with playing things you want to get rid of, and sometimes you know that you’re at the complete mercy of other players’ power. Unless you can draw those plays out of them beforehand!

Often times when I look at a game for review, I’d like to say I can get a decent sense of it just from reading the rulebook. That wasn’t the case with Nokosu Dice. The rules are simple almost to the degree that the game, despite its lovely production quality, seems too light, like there just isn’t enough to it. Was I wrong! There are so many subtle interactions at play in this game that a cursory glance of the rules cannot convey. This game plays so smoothly, a textbook example of remaining easy to learn and hard to master, that it’s been asked for again and again over my holiday gatherings. Deep engaging play combined with simple rules and quick flow of gameplay. What more could you ask for in a trick taking game? 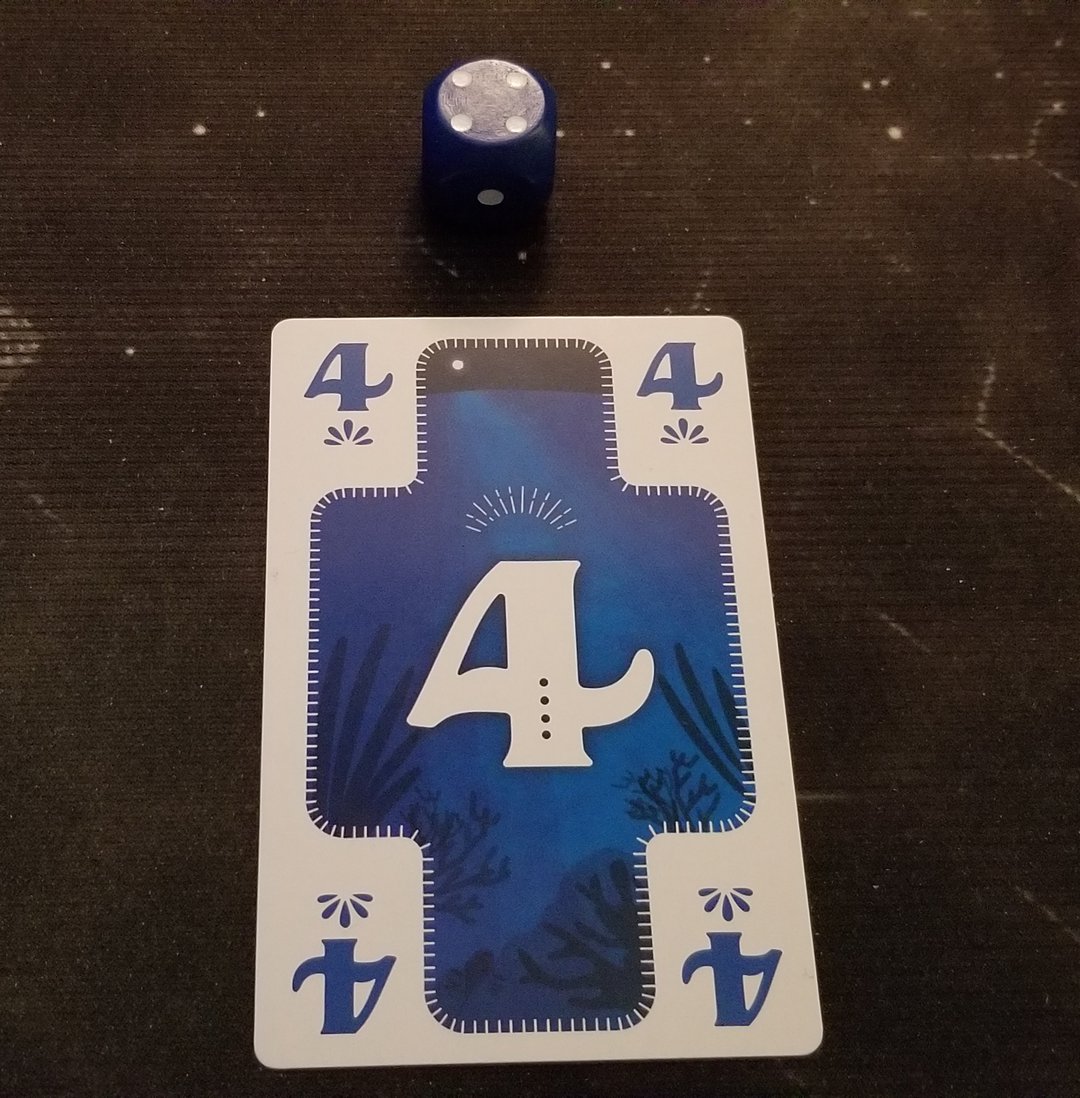 If you're used to counting cards in other trick taking games, you'll have to recount here. There can be more than one, or even several, of a given number thanks to the dice!

Not A Tricky Situation

I wholeheartedly recommend this game if you and your friends or family enjoy trick taking games. In some ways, it’s easier to recommend than other modern titles like Indulgence, another trick taking game that plays at 3 or 4 players. Don’t get me wrong! Even though I love Indulgence, and its production quality is totally top notch, I find it sometimes hard to get to the table as its theme is a little off-putting to some. Being a less thematic, no frills production, Nokosu Dice on the other hand is easy to toss down and just get into the crunchy headspace of outwitting the other players.

Who might not get the most out of Nokosu Dice, that’s the last big concern here. For one, while this game seats three players as well as four, it’s no good if your game group is 5+ or you only play with one other person. Also, while I’ve found this game appeals to abstract game lovers all the more for its lovely artwork devoid of any greater theme, those who aren’t already attracted by trick taking might find the lack of engaging theme a loss that costs them their interest. I’m a firm believer that the game is good enough to hook people willing to give it a go, but I’m sure many of us can think of those times when a good theme helped the cause in no small way.

Aside from those concerns, I’d say if you’re still interested in this game you should be totally safe in grabbing a copy! My concerns might be more limited than on my other reviews, but that’s because trick taking games are a pretty straightforward affair. Either you enjoy them or you don’t, and this game doesn’t do much to complicate that fact. If you’ve never played one before, this is honestly a pretty solid title to start with, and it could be the modern trick taking game that gets you into trick taking games. Head on over to Big Cat Games if after reading this you’re still interested. At the time of this article, they are taking preorders for January, and I’m sure it’s not the last we’ll see of this clever little box!